A retro throwback with a bit more under the surface.

Nostalgia is a fickle beast. In order to accurately replicate and honour legacies, modern game makers have to keep one foot firmly in the past, whilst acknowledging the progress made by subsequent titles over the years. Perhaps that’s why the moniker “nostalgia” is often applied mostly to pixel art aesthetics wrapped around modern trappings. Adventures of Chris both manages to have some modern elements, but unfortunately at times remains too slavish to the 16 bit platformers it yearns to evoke.

The titular Chris is a large teenage boy. It is well known that his size is a factor, because every NPC in the game seems to want to comment upon this, in often crude attempts at humour. On his way home in 1995, Chris is magicked into the air and arrives in Romania, outside Count Junior’s (and definitely not Kid Dracula) castle on his birthday. Friendless, Junior has rounded up other kids from around the world, and as Chris tries to save them, Junior’s magic turns him into a balloon. Upon escaping by floating away, Chris encounters the balloon kingdom, and begins a globe trotting quest to vanquish the associates of Kid Junior and save the world. It’s a slow start, and one that can put the player off initially, until the main world map opens up. 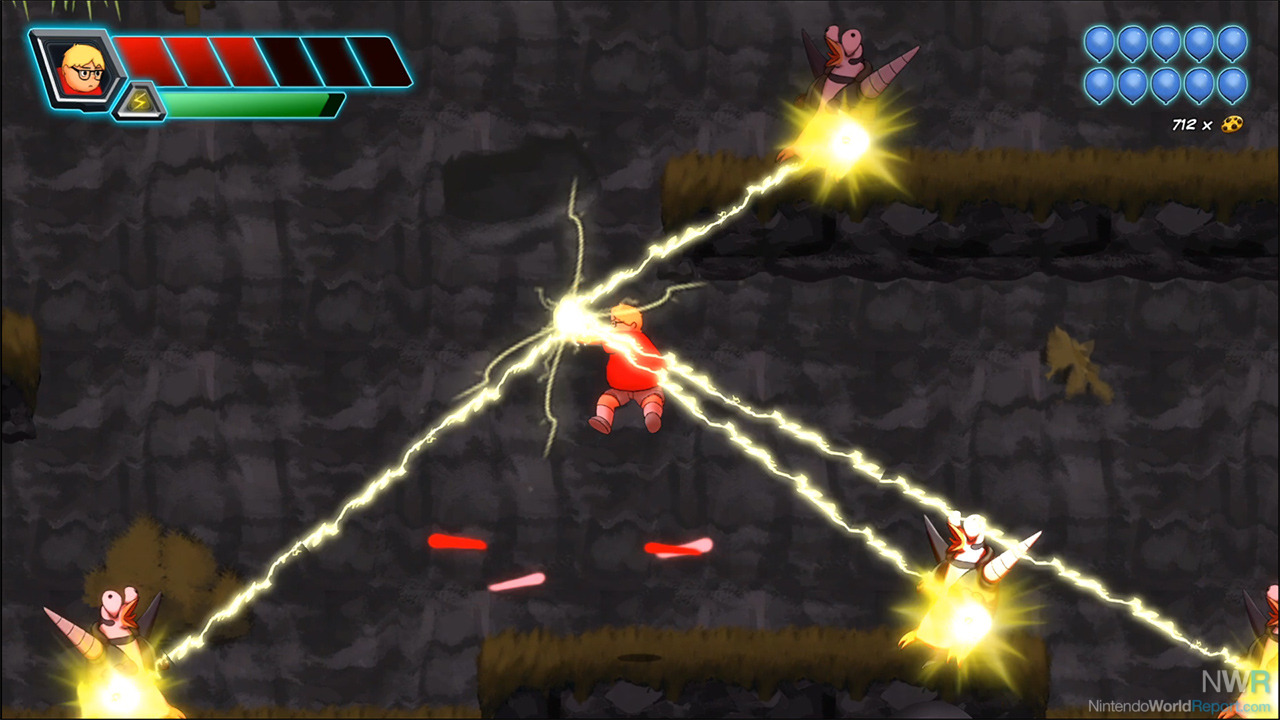 In essence, the majority of the game most closely resembles the Mega Man series. Chris can visit any country on the map in any order, and in each one can collect a new ability through traversing 2D combat platforming levels. It must be said that first impressions are not great. In trying to evoke games such as Chuck Rock, Cool Spot, and Boogerman, among others, the animation style in an HD context looks more like a Flash game than a cartoon. It’s quite jarringly rough. In addition, the enemies that Chris can dispatch, whether with his fists, weapons, or magic, have no sense of tactility upon death, bouncing quickly off the screen. Yes, this is exactly how it was in 1995, but that doesn’t mean it is actually enjoyable. Thankfully, there are some saving graces. Chris’ balloon ability initially allows him to inflate once for as long as he wants before deflating and hitting the ground to refresh it – think something akin to Celeste’s dash mechanic. The number of inflations can be upgraded, and if Chris touches a balloon in mid-air, the mechanic refreshes. This leads to several quite clever platforming sequences as the player utilises this (and other later mechanics such as a belly flop that allows Chris to jump higher) to negotiate some tricksy level design. Thankfully, like Celeste, death results in an instant restart to the beginning of the screen the player last entered – very welcome later in the game. 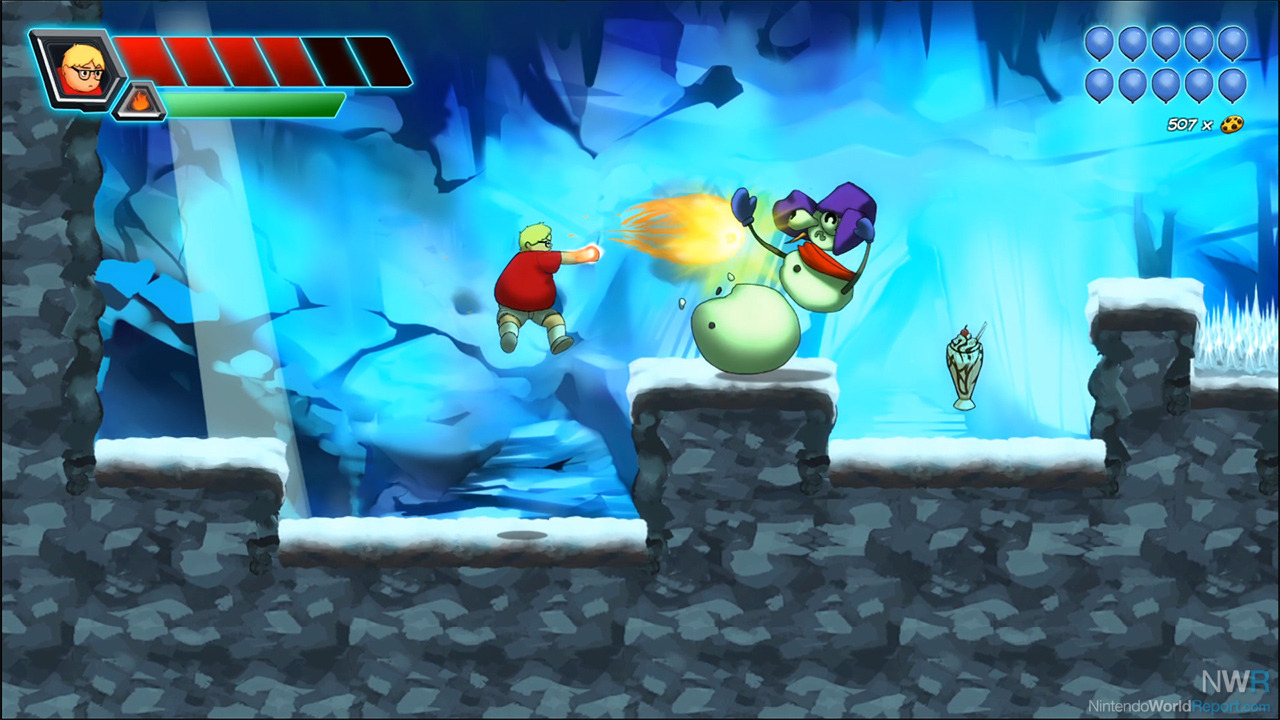 In addition, the levels themselves are commendable for their variation. A visit to Australia sees Chris floating behind a player-controlled sub in a 2D side scrolling shooter environment. An extra level of complexity is added to this in that although the player controls the sub, it is Chris who is vulnerable to enemy attacks whilst the sub is not, so the level becomes about managing Chris’ flotation level as much as anything. In Los Angeles, latter screens involve smog-filled rhythmic platforming and careful utilisation of fan mechanics. Not all are as successful, and a trip to Japan’s poorly realised stealth mechanics, alongside an annoying Ninja House maze, are less enjoyable. Each stage has its own soundtrack, and unlike the graphics, these are very successful in evoking the 90s melodies of the Mega Man series, or in Romania’s case, something that wouldn’t feel out of place in a Castlevania title. The countries are very short, however, and upon clearing all of them in around two hours, alongside side quests in the Balloon Kingdom, I was both expecting the final battle with Count Junior, and wary about recommending the game due to its perceived brevity and simplicity. That’s where Adventures of Chris throws a sideswipe at the player. Without revealing too much, clearing the initial worlds is only a part of the game – there are return trips to familiar locales, but with twists on the mechanics of the game – for example, what if Chris was unable to deflate? And then there is the final assault on Count Junior, who by the end of the game has amassed monstrous creative power, or as he calls it, his ‘Toy Box’. At this point the game becomes very much like a toy box of its own, as the developers throw new and creative ideas on every screen. The platforming, and negotiation of levels becomes seriously intense, and culminates in a final battle where the player must manage several mechanics at once. It really is a treat. Following completion of the main game, a ‘Mean Mode’ opens up, essentially with more enemies, spikes and pits, with the game’s dialogue changing to be more self-aware – for example, characters feeling relieved that the pit they have fallen into isn’t bottomless. The humour still fails to land, but mechanically it is an interesting remix mode. Once this is cleared there is a final mode with a developer’s commentary, a la games such as Portal.

Adventures of Chris is not a pretty game to look at. Initially, it is slow, somewhat uninvolving, and ostensibly simplistic. However, for players who persevere beyond those opening levels, there are some genuinely clever and fun platforming elements to be discovered, adapting and evolving the 16 bit template. It’s just a shame that the first part of the game is so slavish to the formula. There’s fun to be had here, just at the expense of the legacy it evokes.