Reap what you sow.

As we come to the end of 2020 (thank god), any gamer’s thoughts turn to their Game of the Year contenders. While it’s going to be very difficult, if not impossible, to knock Tony Hawk’s Pro Skater 1+2 off the throne, Sakuna: Of Rice & Ruin, is, at least, a close second (Tony Hawk also isn't on Switch). When I first heard of this game, it looked like a lovely combination of Muramasa: The Demon Blade and Harvest Moon. As it turns out, that’s not too far from the truth, and let me tell you--it works.

Princess Sakuna is a spoiled goddess who lives in the Mihashira Capital of the Lofty Realm with her friends with her fellow immortals. She gets in trouble with her mother, Lady Kamuhitsuki, when she allows a group of mortals from the Lowly Realm into the Lofty Realm, she is banished (along with the band of humans) to Hinoe Island and is charged with making a dent in the demon population and learning humility and responsibility by caring for her human charges.

The game is structured in terms of days and seasons, and Sakuna must balance exploring Hinoe Island, collecting food and other resources from each stage, and coming home to farm rice and feed her adopted family. In stages, Sakuna runs through side-scrolling areas of various sizes, finding things like manure, wood, copper ore, etc. and killing animals, which will drop meat and various other resources. Combat has a decidedly Muramasa flavor to it, with lots of combo-heavy swordplay. Sakuna has a hookshot-like Divine Raiment that can be used to maneuver between enemies, pull them towards you, debuff your quarries, and various other uses, which open up as the game goes on. 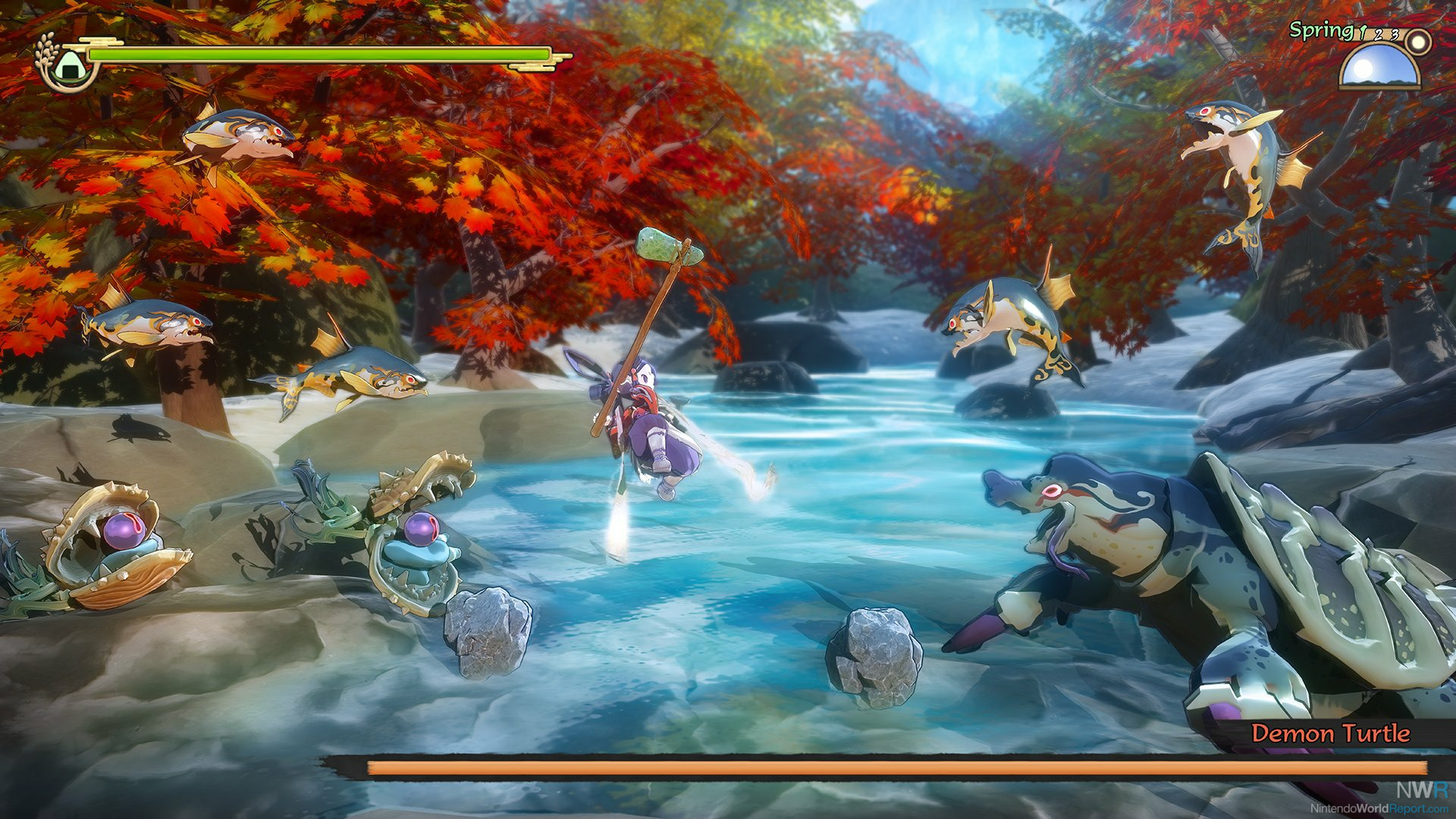 In addition to light and heavy normal attacks, Sakuna can assign special attacks to the A button (plus a direction), which can be powered up the more they’re used. One of her best tools is an attack that lets her smash enemies into other enemies, which can be chained together, creating a lovely domino effect. Overall, combat is simplistic but satisfying--the Muramasa comparison is apt--and it gets better over time as Sakuna gains new special attacks and Raiment abilities. Further, her compatriots will eventually learn to craft new clothing and tools that will improve Sakuna’s combat prowess. Different weapons have their own buffs, and you can attach new jewels found as you explore that will further buff your equipment. Even the buffs can be upgraded by fulfilling certain conditions.

Each stage has a number of goals to achieve, some of which are weirdly ambiguous or chance-based, and doing so will increase your “exploration” rate, which is how you unlock new stages to explore. That is, you won’t necessarily move forward by getting to the end of a stage, which takes some getting used to. 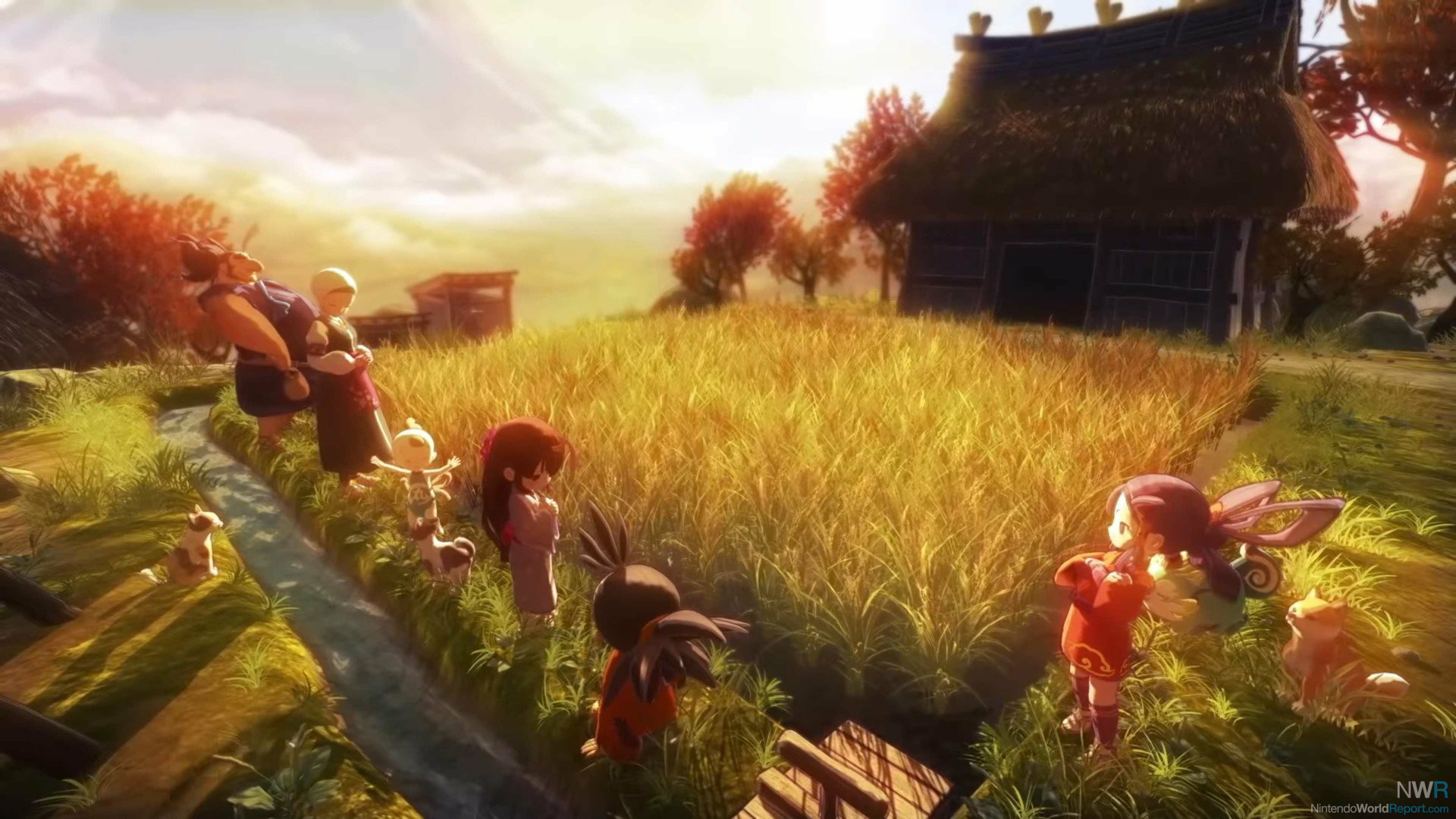 When you’re not killing rabbits, boars, and flying fish, you’ll master the fine art of rice farming. I was surprised by not just how fun the rice farming is, but also by how deep it goes. Sakuna will perform all sorts of farmyard tasks, including tilling the soil at the end of winter, planting rice seeds the correct distance apart in the spring, actively growing the ears in the spring and summer, then reaping the harvest, drying the rice, and threshing the seeds before winter. In addition to this, you’ll slowly learn how to maximize your field’s yield, catch and release helpful animals (like spiders and frogs), and--if necessary--watch the health of your crop. The more farming Sakuna does the better she gets at it, and she’ll eventually find ways to make the process easier. After each season, you’ll get a summary of how you did, which suggests ways to improve next year’s crop. In addition, Sakuna’s human friend Tauemon will give advice on how to effectively grow rice, and Sakuna can offer Amber to Lady Kamuhitsuki to bring more favorable weather.

As enjoyable as the farming is, the game doesn’t adequately cover fertilizing, which is a critical component of the whole process. It provides nutrients for the soil but can also provide big bonuses to your yield and the bonuses provided by the rice crop. While base components are easy to come by in every stage (generally manure, beast hooves, and fallen leaves), Sakuna can add a huge array of components that will boost various aspects of the rice. One of the problems with fertilizing is that it only lasts a day, and since rice only grows while the sun is up, you have to prep your fertilizer the day before and let it marinate overnight, which is something I often forgot to do.

Food prep is another aspect of Sakuna: Of Rice & Ruin that I enjoyed but always felt like I was missing something. Bringing home rabbit and boar meat isn’t enough--you have to get with another of your human friends--Myrthe--to prepare the food before it spoils and combine different components into meals. You’ll do the majority of food prep after harvesting your rice. You can also choose the menu every night, which is helpful for when you have a specific goal in mind for the next day, because various dishes will provide temporary stat bonuses.

Unfortunately, Sakuna’s secondary energy meter (Fullness) drains slowly over the course of the next day, and when it runs out, any stat bonuses or abilities go with it. This essentially means you only have so much time to explore with relative safety, although as you get farther in the game and your equipment and attack abilities improve, that becomes less of a concern. When night rolls around, demons become significantly more dangerous, but certain resources and goals only appear at night.

I don’t have many complaints about Sakuna: Rice & Ruin, but here they are. I already said that fertilizer isn’t adequately explained, but other things get the short shrift, too. For example, I can’t understand why so many weeds pop up in my rice field when I fill it with water, even when my fertilizer is chock-full of buffs. Combat is not as deep as it needs to be early on, and boss fights can be agonizing if you’re not properly prepared with good meals and equipment (it pays to grind for the materials that your smith needs to upgrade your weapons).

The game features a good amount of cutscenes, and every character is voiced. I particularly enjoy their dinnertime conversations, which often revolve around the mythology of the Lofty and Lowly Realms. Despite that, it took me a very long time to warm to Sakuna herself, who spends a lot of her time being--and sounding like--a spoiled brat. Similarly, one of the children, Kinta, despite being your weaponsmith, is, you know, terrible throughout.

It looks damn good, though, with a cel-shaded aesthetic that bursts with color. The way the sun filters through your rice ears is always lovely. Various environments look more or less interesting--I was rarely a fan of the rock-encrusted areas, but forests and river systems are wonderful. There’s a dearth of enemy types, and bosses and minibosses tend to be--but are not always--larger version of standard foes. The music is catchy, if a bit repetitious. All of the voice actors do well in their roles, as well.

All that is small potatoes, though, compared to the fun combat and surprisingly enjoyable farming. It turns out the farming might be my favorite part of Sakuna: Of Rice & Ruin, though, despite my issues with fertilizer. I didn’t think a video game could give me such an understanding and appreciation of rice farming, but this game did. Rice farming is as much an art as a science, it’s beautiful, and it’s calming. Sakuna and I were both learning the value of hard work and an appreciation for doing it well. Now if only I could catch more frogs...