One of the cutest physics-based puzzle games on Switch.

The Switch is home to many experiences that one might enjoy on a part-time basis. From run-based roguelites to a multitude of simulation games, the ability to spend a few minutes or a few hours with the console is one of its best selling points. Enter Part Time UFO, a crane game-like puzzle title from HAL Laboratory. The makers of BoxBoy and Kirby are no strangers to adorable protagonists, and the UFO named Jobski in their latest game is no exception. While you will eventually run out of new things to do, co-op play and a variety of achievements will keep you hooked like a stuffed animal in a claw machine.

Across 30 stages, the primary aim of Part Time UFO is to use the Jobski’s claw to pick up objects and stack them in a specific area or a certain way. From grabbing fish in the sea and hauling them onto a ship to stacking dinosaur bones on museum platforms, there are about seven or eight different themes you’ll encounter in the game’s primary mode. The final stages change up the formula in an interesting way, but the real hook is that every level is both timed and features up to three medals you can earn based on completing the main task in a special way. Often, you’ll be able to earn a medal just for completing the stage quickly, but you can also find hidden objects and characters to throw onto the pile, which can earn you medals as well. If you happen to earn all three medals on a single attempt, you can unlock a more challenging version of the stage, but these don’t change the proceedings all that much. 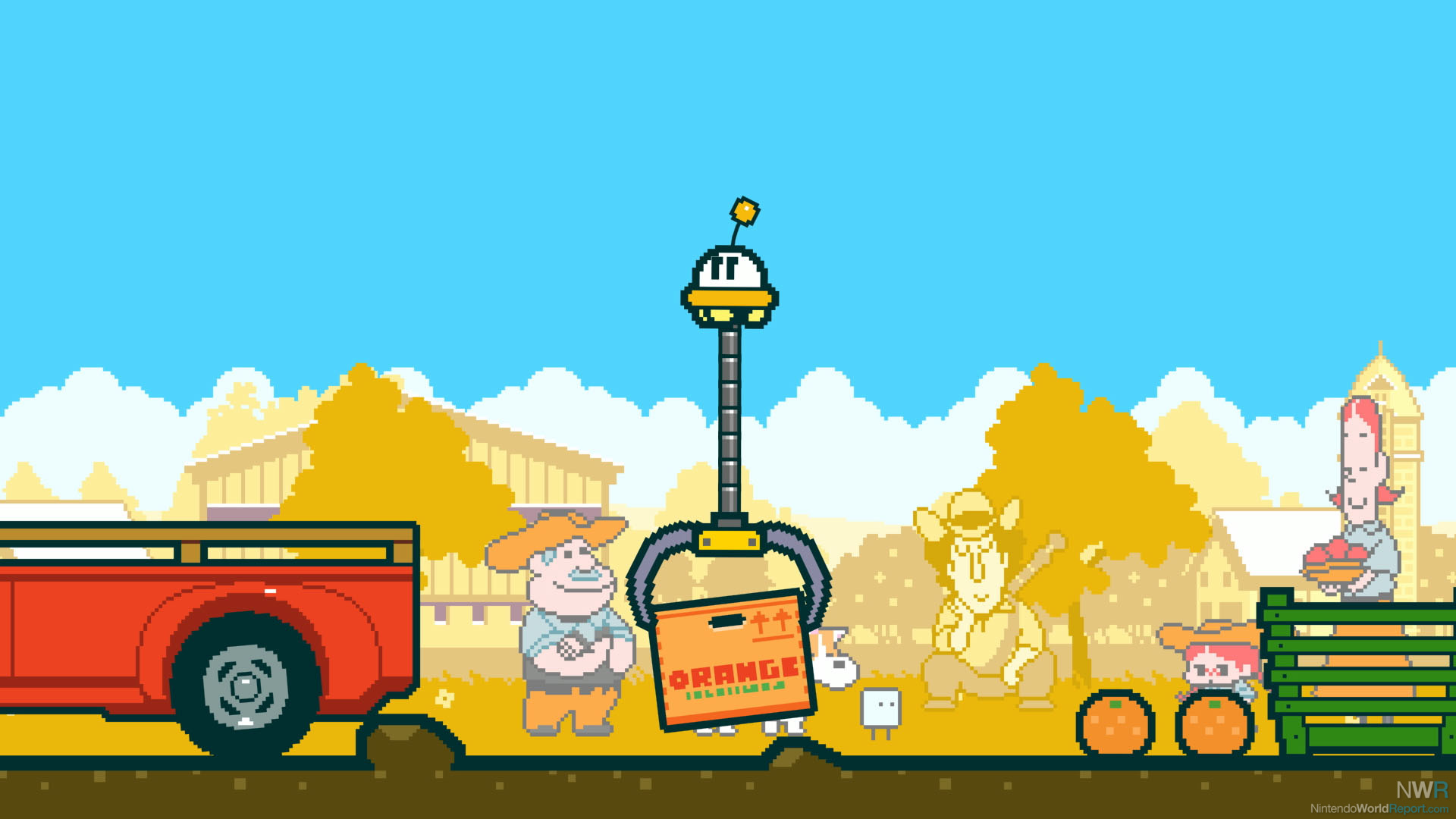 In a few stages, you’ll have to move blocks into a grid, and these aren’t quite as satisfying as other stages. It’s also worth noting that some of the medal challenges are a little cryptic in that they are represented by small images you see before starting each stage. Ultimately, most of the tasks Jobski is assigned are thoroughly enjoyable, but there are a few misses along the way. As well, it would have been nice to see a few more different stages thrown into the mix, rather than three missions that take place on a farm or a fishing boat.

The real allure of Part Time UFO may just be how gosh darn cute the whole thing is. From variations on the same perfect song that repeats throughout and BoxBoy himself, Qbby, hiding somewhere in every stage, to dozens of unlockable costumes for Jobski, the fantastic presentation really makes it hard not to love every minute of this game. The menu screen is just a shot of Jobski chilling at home, and here you have options to shop for new outfits, take on new jobs (the aforementioned stages), add a co-op player, or check out the in-game achievements. The bright, vibrant colours and pixel graphics look like they’ve been pulled straight out of WarioWare, and I’m definitely here for that. 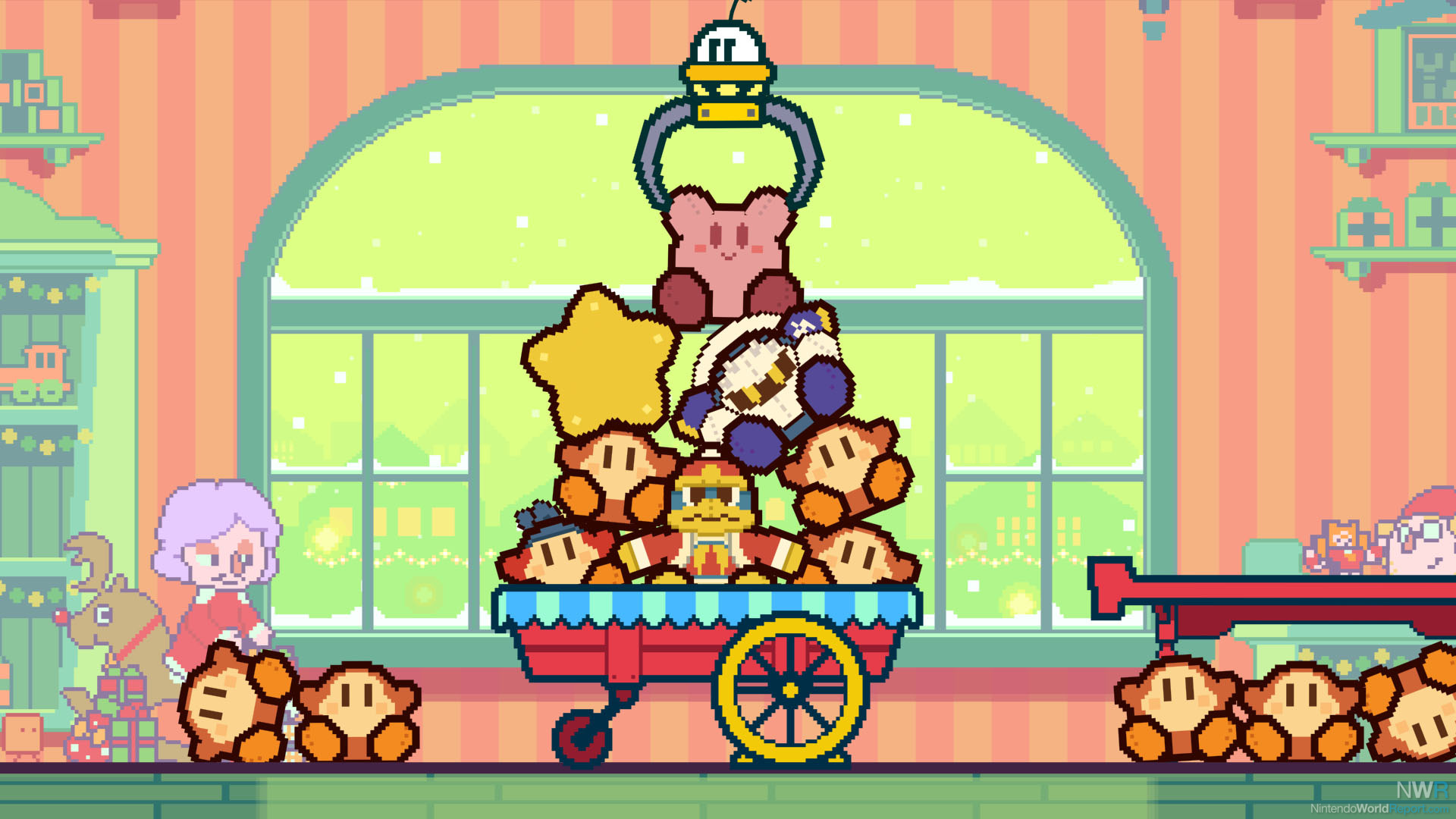 Jobski and his claw control well, but it can take multiple tries to figure out how to balance objects just right so they’ll stay where they need to. As you play more of the game, you’ll unlock special modes like a dungeon-exploring adventure that mixes up the formula and the Tower of Infinity, where you keep building upward as high as possible until time runs out. In the former, you’ll travel to Treasure Island and look for treasure while navigating new spaces larger than any in the normal stages. The caveat is that you need to purchase tickets from the in-game store to travel to the Island for these dungeon excursions, but it’s easy to earn more from playing the game. The harder variations on the regular levels are a great way to make co-op play more challenging, too. Overall, you’ll find a solid amount of content on offer in Part Time UFO and all of it delivered in a delightful package.

The lovable Jobski and his part-time endeavors are absolutely worth checking out on Switch. Even if you’ve already played the mobile version of Part Time UFO, this latest release adds co-op, and the adventure and stacking modes I mentioned earlier, so there’s reason to jump back in. We all need a dose of pure happiness now and again, and if there’s anything that comes out HAL’s version of the classic claw machine, it’s joy.