In which the Sears Wish Book is replaced by the Necronomicon.

I must confess that I’m not a big fan of Christmas, or any holiday that happens in the middle of winter. In fact, I’m the only one who finds How The Grinch Stole Christmas to be an example of a heel turn. Still, I’m always down for a good parody, and only held off on the latest from Zeboyd Games (Cosmic Star Heroine) when it launched on PC last year because I was hoping for a Switch release. Now that it’s here, it was definitely worth the wait, even for my Scroogey self. 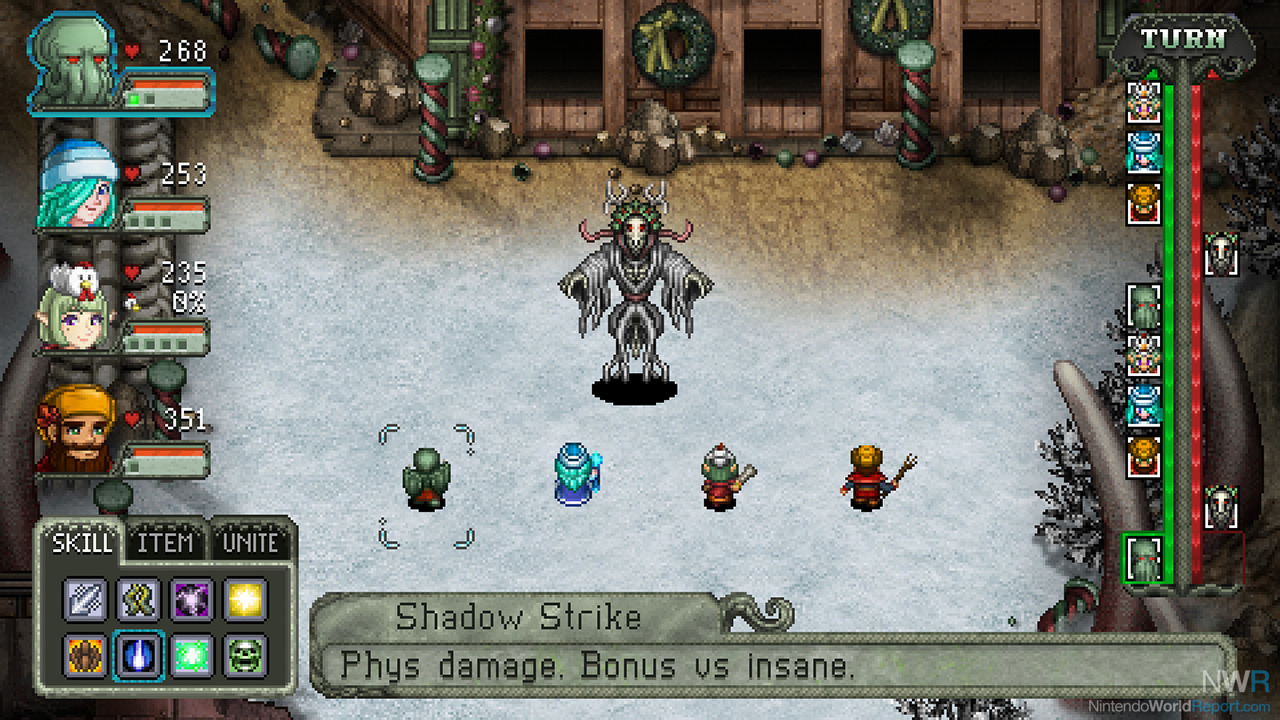 Cthulhu Saves Christmas is the semi-canonical follow-up to 2010 Xbox Live Indie title Cthulhu Saves The World, in which a depowered but determined Cthulhu has to save something in order to regain his true glory. In this case it’s Christmas, as he finds himself stuck in an endless procession of Christmas Eves that will last until Santa Claus is rescued from The Christmas League of Evil. Accompanied by Santa Claus’s granddaughter Crystal, the poultry fan/witch Baba Yaga, and Nutcracker acquaintance Belsnickel, Cthulhu is tasked not only with finally bringing on Christmas Day but also building “R’lyehtionship Values” with the party members and the other townspeople. The game works on a weekly system, with four days of character building (and item acquisition), a prep day, a dungeon raid, and a postscript. The scenes are top quality, and forget the fourth wall; this game only has ONE wall. The narrator is a character unto themself, and pretty much every conversation parodies some RPG convention (The R’lyehtionship Values are meant to skewer the concept of Social Links in the Persona series, for instance). Even the side characters, such as ex-cult member Bob and the developer mascot / recurring character Paws, have moments that will be funny whether or not you’ve tried any of the developer’s previous titles.

When not dealing with the story scenes, the combat is a turn-based affair with a modified random encounter system. Each area has a set number of random encounters that will occur, ranging from five in the early game to 15 by the end game. A tension meter is in the lower right corner of the screen, and if it fills up you can hit the confirm button to avoid the battle—or just go into it, because once all the battles are done you won’t have to worry about them again. It’s still possible to trigger encounters by going into the menu, but that’s entirely optional and only needed for those who really like seeing levels increase. The battle system shows movement order on the right side of the screen a la Final Fantasy X, and each party member has a series of skills that they can use once per fight unless Defend or another skill is used to trigger a recharge. Five skills, four chosen by the player and the ever-present Defend, are always available, with three other “Insanity Skills” rounding out the moveset. The presence of Insanity Skills means that every fight will have a different strategy, as only one move in the game (Cthulhu’s basic attack) is constantly selectable. There’s also no reason to hold back, as the party is fully healed after each fight.

Depending on your reading speed, it may not take long to see the end of the story. A couple of two hour sessions got me to “The End,” and that’s with running out the battles each time (though playing on Easy; medium difficulty would be 4-5 hours). The hard part was maxing out R’lyehtionship values with even one character—thankfully, there’s a New Game+ option that unlocks upon completion against the main character’s objections. The part that I spent the longest time on was honestly deciding which character to focus on in between battle days. If you’re trying to max out the main characters, you may not have time to check out the movie theater, skating rink, or meeting of former cult members. I haven’t looked into the total time to get 100% completion, but I think seeing every event in the game can be pulled off in two runs (about 10 hours). Given some of the RPGs both that I have played and backlogged this year, it’s nice to have one that doesn’t overstay its welcome. 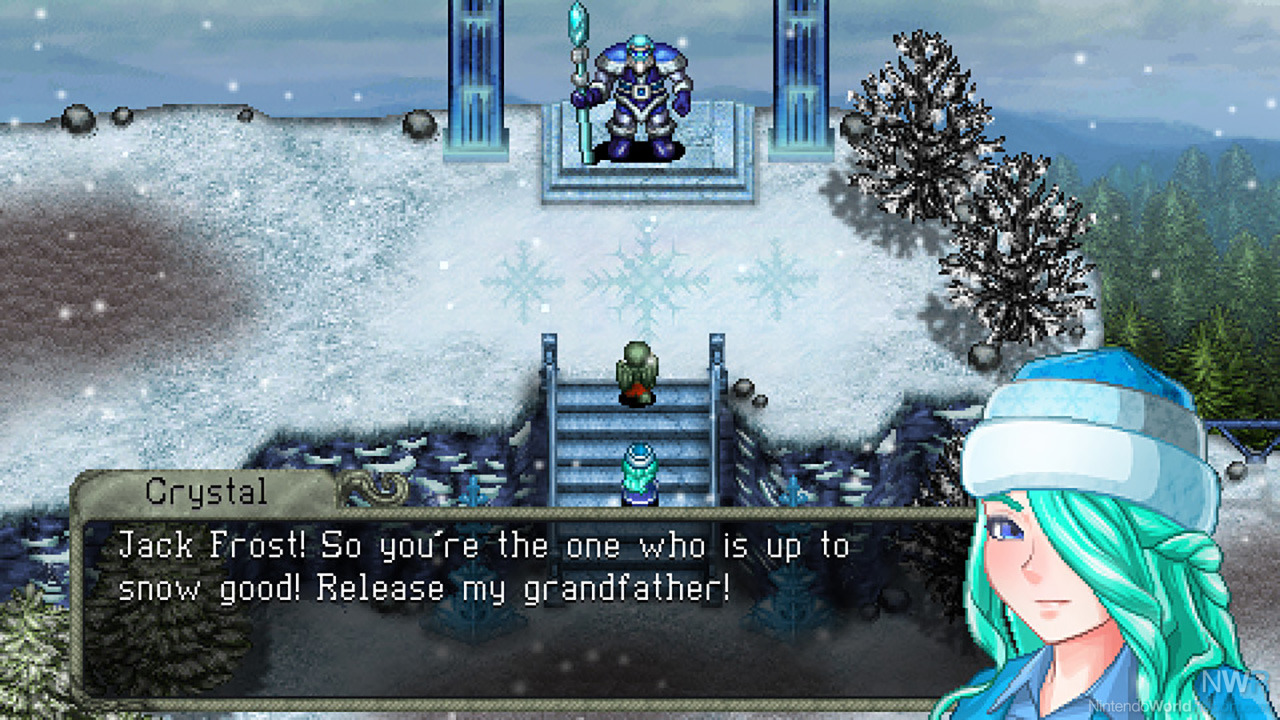 We're about to beat the hee ho out of him.

Although it doesn’t go for the full 16/32 bit graphical style that the last Zeboyd release on Switch did, Cthulhu Saves Christmas does feature incredibly sharp pixel art and good looking character portraits. The battle maps also have their own individual charms, and don’t really beat the Christmas theme into the ground. The soundtrack features some rocking remixes of Christmas music for the battle themes, if you’re into that sort of thing.

After the exhausting dev process of Cosmic Star Heroine, I can see why Zeboyd Games went with a smaller project for this round. It’s a simple game, with a hilarious cast of characters and it’s about the length of the Home Alone duology. Cthulhu Saves Christmas is a nice way to wile away a snowy November day while trying to figure out how to convert to J.... planning your Christmas holidays.

A review code was provided by the developer. Also, the author is friends with the inspiration for one of the characters.

Thanks for the review. It convinced me to buy.  I'm a big fan of the idea of seasonal games (like horror games in October) and this is a light, breezy game for the Christmas season.

I like how the battle system forces the player to use all their moves, and not just be reliant on just doing the same two moves all game.