An RPG for Zelda fans or a Zelda game for RPG fans?

Fresh off its exclusivity to Apple Arcade, Oceanhorn 2: Knights of the Lost Realm, has arrived on Nintendo Switch. It is equal parts classic JRPG and The Legend of Zelda, landing not too far off from something like the Mana series. But can this expansive indie adventure live up to the titles it has been compared to?

While I don’t usually start my reviews with graphics and technical performance, I myself was caught off guard by them so immediately, they need to be given a moment here at the beginning. Oceanhorn 2, whether playing docked or handheld, is incredibly good looking. In fact I’d feel perfectly comfortable calling it one of the best looking games I’ve played on Switch all year. Add to that its very short loading times and you have a game that is set to stun right from the get go.

Oceanhorn 2 sees you playing as a nameless hero. After retrieving a mysterious lockbox and completing your training as a knight, you quickly find yourself on an epic quest against a mysterious evil force. Along the way you’ll pick up a tropey though charming cast of party members including a princess who refuses to act like a princess and wants to fight, along with a robot who seems technologically more advanced than the world around him. This is where we immediately see a contrast between the clearly Zelda influenced progression and more JRPG inspired elements. This is essentially a 3D Zelda game that you play with a party. This opens up a lot of interesting possibilities for dungeons and puzzle solving. Depending on a party member's weapons they’ll have different uses throughout the adventure. For example a ranged party member may be able to flip a distant, unreachable switch. But more realistically you’ll be using them to do the jobs of heavy rocks and hold down buttons. They also serve to smooth over one of Oceanhorn 2’s greater failings, the combat. 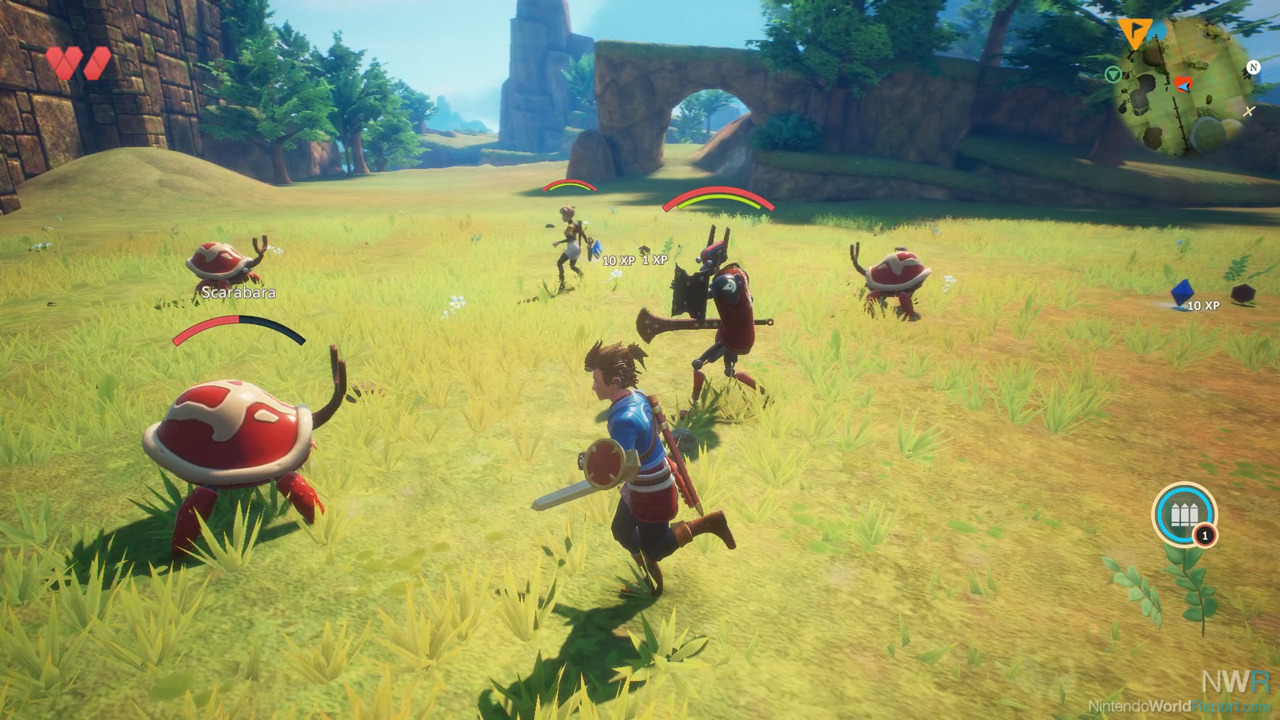 Combat in Oceanhorn 2 fluctuates between, “I can live with this,” and “why oh Lord hast thou forsaken me?” On the surface it looks to operate much like modern 3D Zelda. You have an attack button, a dodge roll, and a shield. Hitting the shield at the right time will even parry and knock the enemy off balance. The problem is there is no targeting system unless you are actively blocking, which prevents you from using other abilities. On top of this there is a degree of input latency between pressing the block and when your character actually performs the action, making nailing the timing of blocks very difficult. As you build up your party they’ll help take some of the pressure off you which makes things a bit more manageable. New abilities and items you find along the way also help to give you options that work a bit better. Regardless, combat is easily the weakest part of Oceanhorn 2.

The rest of the experience fares much better. The world itself is a joy to explore. While not entirely open right away, the world opens up in stages. The progression of the story is quite linear but you’re regularly given opportunities to stray from the primary storyline and explore optional areas. I even found instances where I was able to get a key item a little earlier than it was required. I appreciated that despite some minor sequence breaking it didn’t seem to trip up the game design. In fact I was able to immediately interact with things I was likely intended to have returned for later. When you dive into a cave expecting some extra cash and come out with a grappling hook, you know you’re in for a good day. I did find that some of the secondary uses of various items were a little vague and unexplained. For example, an electricity spell can be used to bridge electrical connections between various points. I was able to find some text that told me I could do that but nothing to tell me how. Frustratingly, charges on these spells have to be built up by gathering materials in the environment, so every time I’d try and fail I’d have to gather resources before I could try again. For the record I had to hold down the aim button, fire the spell, continue to hold down the aim button, and remain looking at the target until the spell had hit. Then while still holding down the aim button I could look around to drag the electric current to another point. Look away too soon or pull your hand off the aim button and the charge will dissipate. Maybe I simply missed a tutorial somewhere but it was a lot to figure out through trial and error. This was however the greatest offender, and other abilities were much clearer. I appreciated that each could be used both in puzzles and in combat. 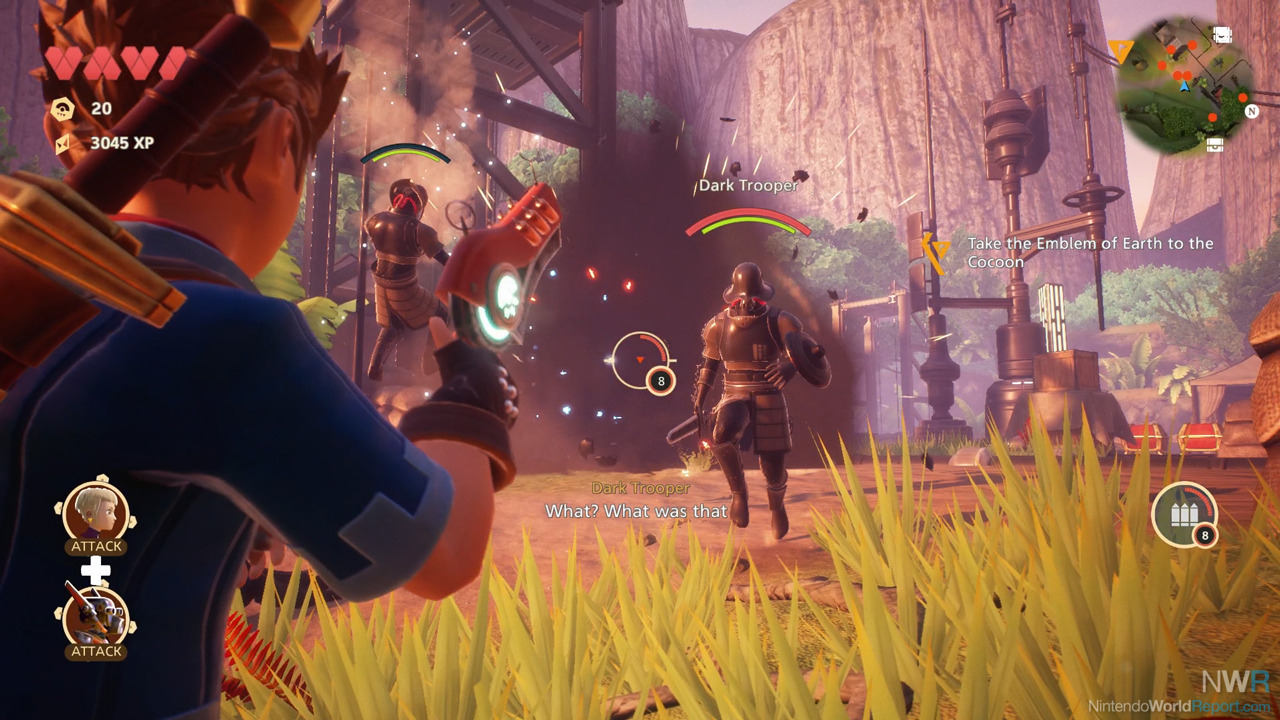 As you progress you’ll gain experience points that will strengthen your character. You’ll also find shards that can be slotted into any of your items to enhance them. It is up to you what you upgrade and when. You can also remove upgrades at any point allowing for some experimentation. Overall I enjoyed the simplicity of Oceanhorn 2’s RPG elements. They open the door for greater customization of the player character than one would expect to find in a Zelda like, without being overwhelming. As a result I can’t help but think that Oceanhorn 2 could make a great gateway RPG for Zelda fans whose experience with the genre is minimal.

Oceanhorn 2 has one or two glaring weaknesses. I certainly had moments of real frustration, but upon overcoming them I’d once again be presented with a world I couldn’t help but explore. The story is fun, if a little predictable. Dungeons and puzzles in the world are varied and just the right degree of challenging. It also certainly doesn’t hurt that it is a gorgeous game that holds its own as one of the prettier on Switch. The genre blending mechanics that Oceanhorn 2 brings to the table help to elevate it above the failings it has. Some bumps along the way can’t prevent this from being a journey worth taking.