As of Pikmin 3 Deluxe’s release, Nintendo has ported or remastered almost every notable Wii U game to the Nintendo Switch. In the grand scheme of things, that’s good—the Wii U had a lot of gems despite its lack of overall sales success, and seeing them thrive on the Switch is great. Pikmin 3 is most certainly a gem, arguably one of the best Nintendo games on the Wii U. In its Deluxe form, it flirts with being the slam-dunk definitive version of the 2013 sequel. Some minor stumbles hold it back, but regardless, Pikmin 3 is a fantastic game. 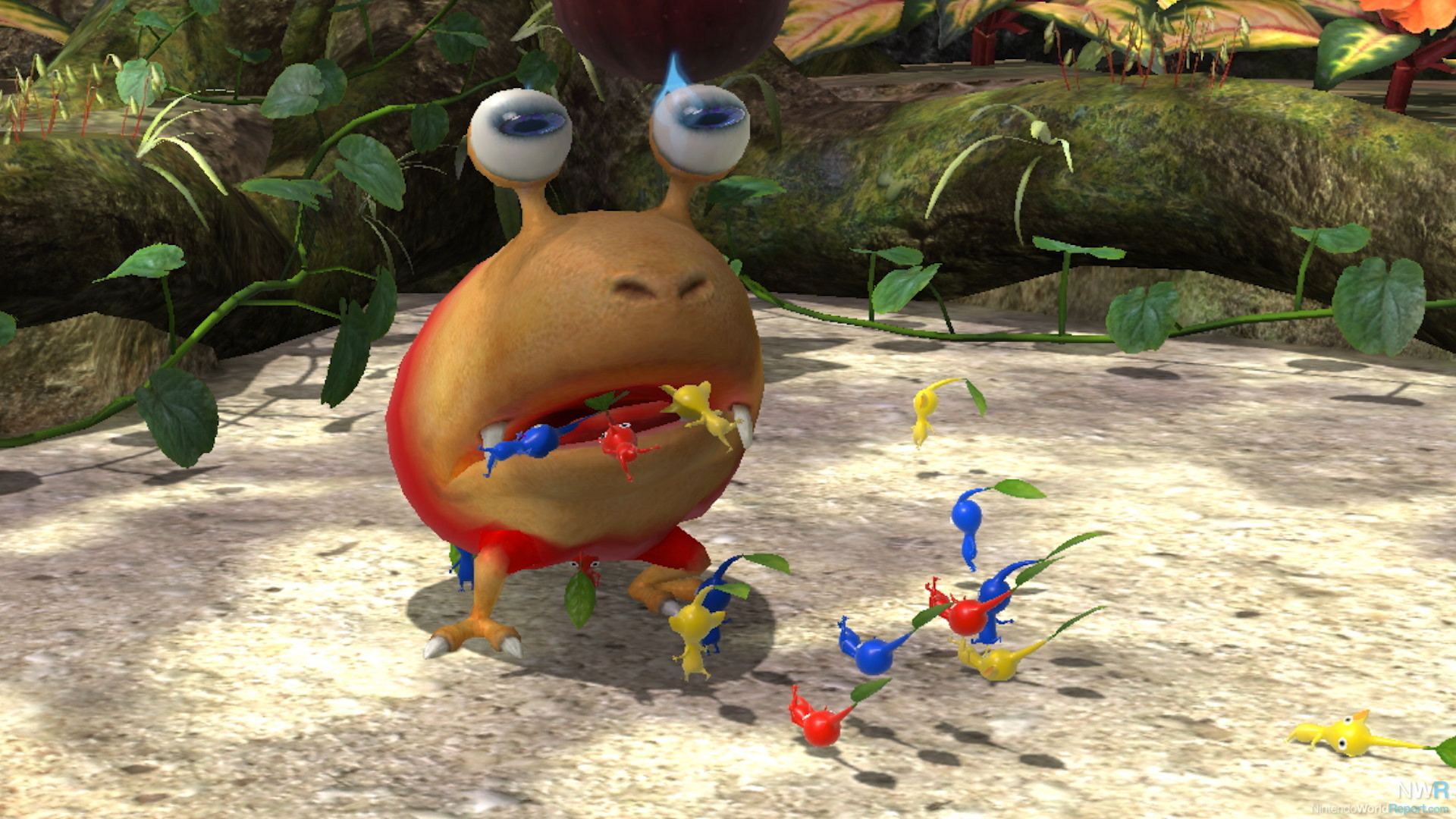 For those who missed out on the original release, the story kicks off with Alph, Brittany, and Charlie—three intrepid travelers from the Planet Koppai—crash-landing on PNF-404, which they think is an unknown planet. Trying to get back home, they explore the planet to find their warp drive and along the way, uncover Pikmin, collect fruit, and battle sizable enemies. As it was in 2013, Pikmin 3’s story is a blast to play. The Nintendo take on real-time strategy is as endearing as ever and the ability to multi-task with three captains while making use of five different types of Pikmin to find new areas and solve puzzles is excellent. In addition to the main narrative, there are two other modes: Mission Mode, which features a variety of timed challenges to collect fruit or fight enemies, and Bingo Battle, an intense competitive multiplayer mode.

So those are the basics of Pikmin 3. Now let’s focus on what’s new in the Deluxe version. The major new content addition is found in Side Stories, which takes the form of a prologue and an epilogue to the story featuring Olimar and Louie—the stars of the first two Pikmin games. While there isn’t much brand new story content, it’s neat how these do provide a bit more context for the main narrative. The disappointing part of these new levels is that they’re basically just new versions of the Mission Mode, so they are all timed challenges where you have to collect as much fruit as possible before the clock runs out. These aren’t new areas to explore; it’s just different variations of levels you have already seen. These are fine, it’s still nice to have a little bit more Pikmin to play, but it’s ultimately not all that compelling. 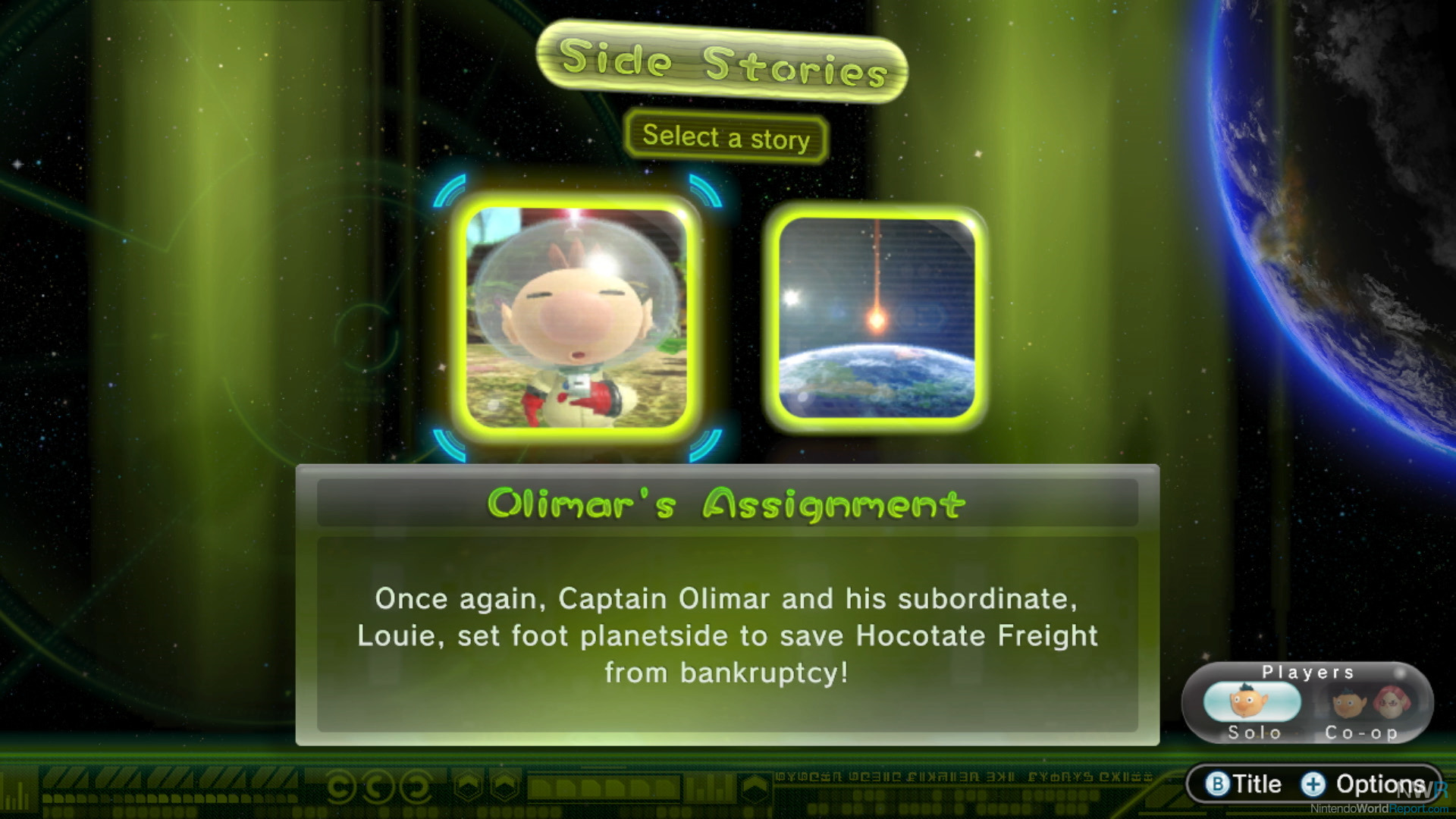 The other Deluxe aspects are better, though, even if they aren’t brand new levels. It’s a lot of quality of life stuff, like three save slots instead of one. Now, three difficulty settings are available: Normal, Hard, and Ultra-Spicy. Ultra-Spicy is indeed challenging, while Normal is a much more leisurely stroll. In addition to these welcomely nuanced difficulties, there’s an optional hint system that more or less tells you exactly where to go if you’re stuck. It’s a fantastic addition, almost tossing a strategy guide in the middle of the video game. Overall, I enjoy how Pikmin 3 Deluxe goes in both directions, making the game both more challenging and more approachable depending on your preference.

Full co-op is also added to the whole story mode, which is great if you have a person to play it through locally with. However, Pikmin 3 Deluxe adds no kind of online play, which is a big missed opportunity. That omission is felt tremendously in Bingo Battle, the virtuoso two-player competitive mode returning from the Wii U release. Bingo Battle throws two players on a map, racing to get fruit and items to complete a bingo card. It’s thrilling and exciting, but being tethered to local-only play kneecaps the potential of this mode. It’s tremendously disappointing the enjoyable multiplayer in Pikmin 3 can’t escape your living room. 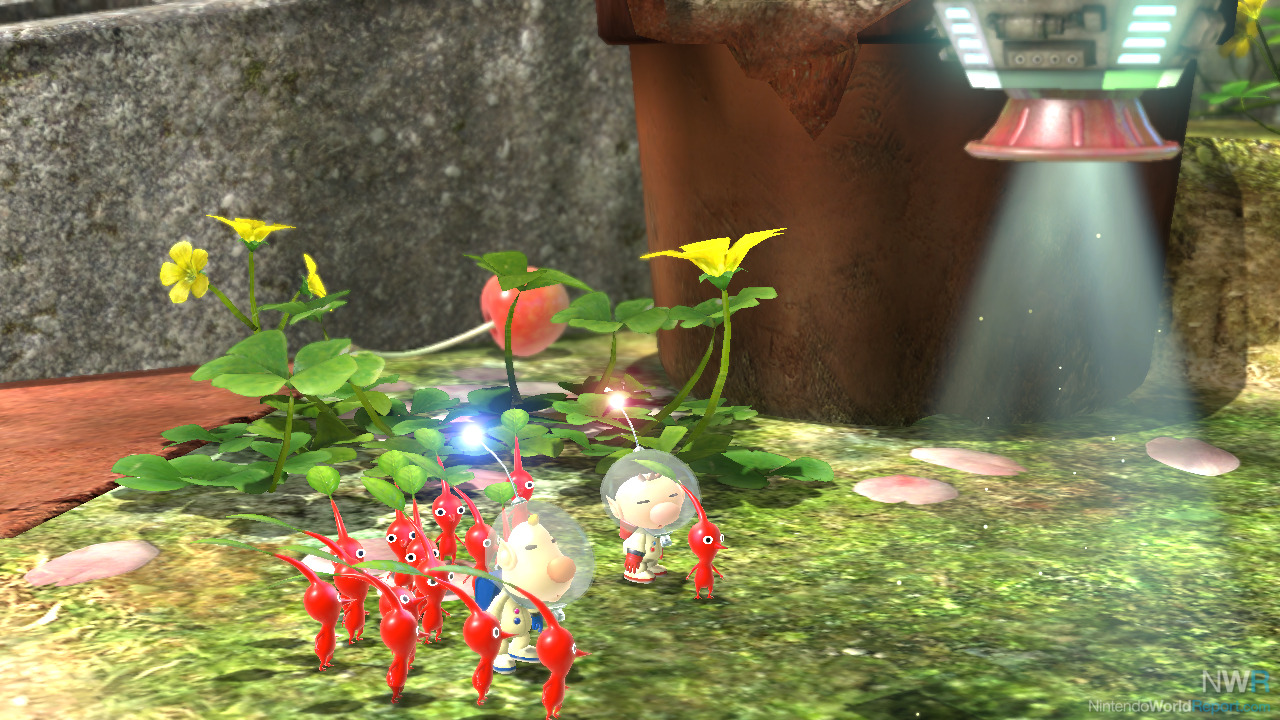 On Wii U, this game made use of the Wii Remote and GamePad heavily. The transition to the Switch is mostly fantastic. I do think the optimal way to control this game is on the Wii U, but the tweaks made in this port close the gap between the great pointer and second-screen controls of the original. It’s primarily a lot of little things. Pointer controls can be done using the Joy-Con, which does an admirable job of replicating the Wii Remote. I actually preferred to play it with traditional controls. The lock-on system has been changed, adding in more places to lock onto as well as just making it easier to bounce between items and enemies. The charge system is mapped to a button, which actually makes it way more easy to execute. I found myself charging way more often than I did on Wii U. One secretly awesome change is now you can call all Pikmin back to the ship near the end of a day. They all still need time to travel back, but this saves the last-minute excursions to help an errant Pikmin across the world. Radar has also changed. Sadly, the cute top-down look that would happen on the TV while you looked at the GamePad is gone, but in its place is more flexibility in how you zoom in and out on the map. It’s not changed to the point that it feels like a whole new game, but the overall control and gameplay tweaks make it substantially different.

This is still a Wii U game, though, and several times throughout the 10-hour story, it was evident that I was playing a game made for the Wii Remote and GamePad. The pointer controls with the Joy-Con don’t totally compare and the lack of a second screen for the map is felt, especially in Mission Mode. The game is still great, but it does make me bummed out that it has been seven years since Pikmin 3 and we’re still seemingly nowhere close to Pikmin 4. And while it didn’t bother me during my playtime, it’s worth pointing out that this does not appear to be a major visual upgrade. It’s smoothed out—the rare bouts of slowdown in the original release seem to be gone—but resolution-wise, it seems to be not much different seven years later. Honestly? That’s fine; this game was a looker in 2013 and is still visually pleasing today. 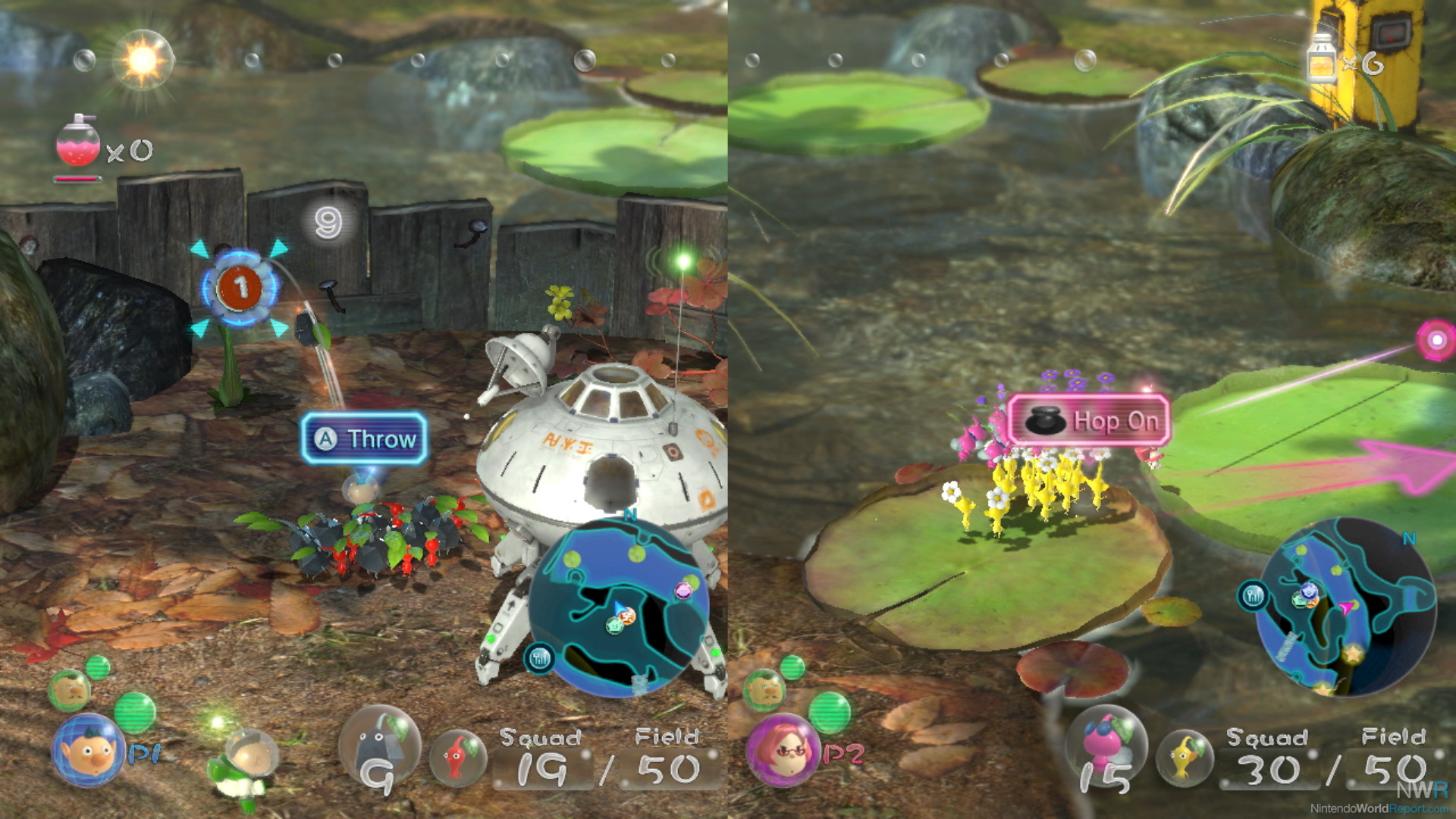 That all being said, it’s very easy to recommend Pikmin 3 Deluxe, especially if you have never played the game before. I wish the new playable content was more substantial or there was online play, but the additions are still an overall positive. The variety of difficulty settings makes the game harder if you want it to be, while also making it far more approachable for gamers of all skill levels. The controls don’t quite match the elegant design of the Wii U, but the tweaks here approximate it well enough. I know for me, as someone who played and enjoyed Pikmin 3 on Wii U, revisiting this game again was well worth the time. Pikmin 3 Deluxe is very close to being the definitive version of a modern classic. Now please, bring me more Pikmin adventures. I would like to visit more areas with these little plant aliens.

Man, I can't wait for this. Never had a Wii U, so this is my chance. My copy is *checks tracking* not getting here till next week. Bleh.

Right there with you on the missed opportunity with online play... would've been a great way to get someone who already bought/played the game once to pick it up again. Was really hoping for online coop play, especially with it being full-price, but it IS Nintendo.

I own this on Wii U from a Nintendo rewards cash in. I was dead set on passing it by unless I found a deal, but the full co-op might make me pick it up. Could be a fun game to play with the wife.