The perfect season for a spooky card game.

Nothing signals the start of spooky season like the release of a new spooky game. Simon Boxer and Twice Different are joining the festivities with the release of Ring of Pain, a new roguelike, card-based, dungeon crawler.

Ring of Pain’s aesthetic elements are centered around one goal: to be disturbing. All of the art walks this line between beautiful but creepy so well. Even the use of color is focused on this goal. The way each character is composed of dark shades accented by neon streaks give them an otherworldly yet sinister feeling. Poison dart frogs use their neon colors to alert others that they’re dangerous and it feels like the highlighting in Ring of Pain is used for the same effect. 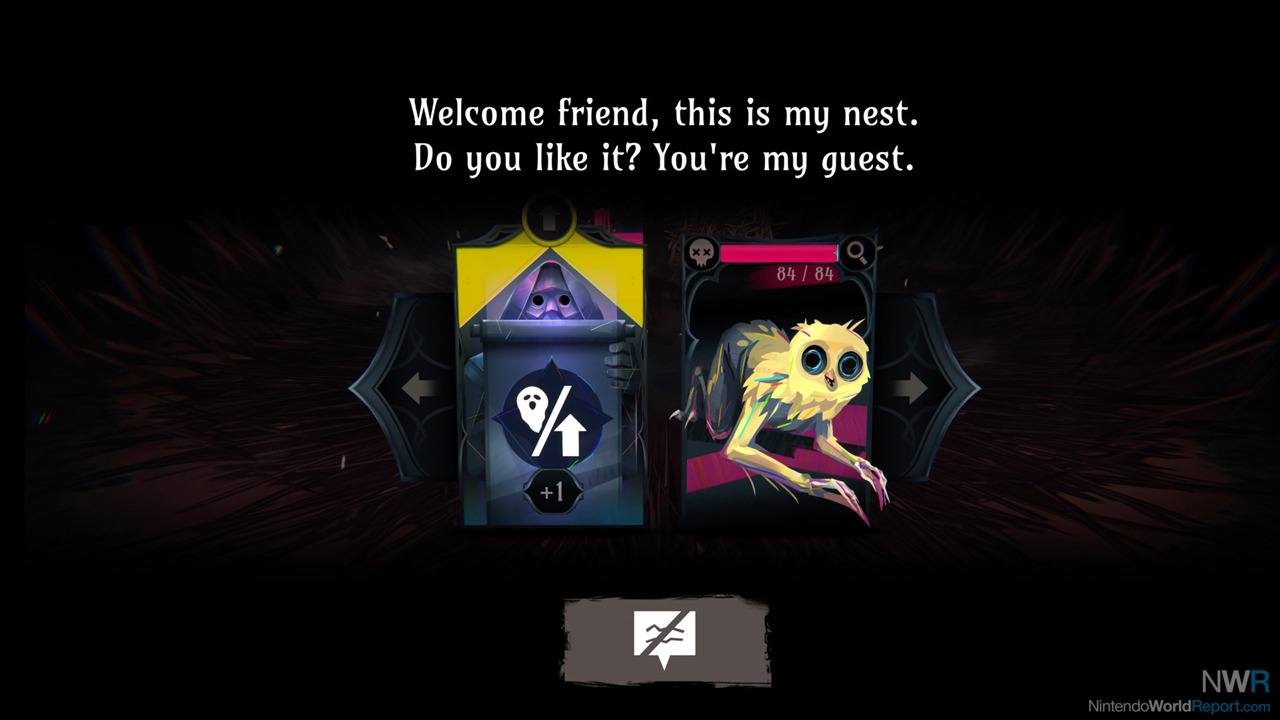 That’s before their actual form is mentioned. Most designs are off-putting in unique ways. The one I want to focus on is Owl, one of the narrative characters. There is a world in which I could think of Owl as cute. They have big doe eyes and bright yellow feathers. If they were small, they would be adorable. The upsetting part of Owl’s design is they have the proportions of a human adult. They have long, spindly arms and legs. Their hands are seemingly made up of only bone. It’s impressive the way what could have been cute is twisted. Owl’s design is overall unpleasant, and I think the development team would take that as a compliment.

The sound design of Ring of Pain is haunting. There isn’t really a soundtrack here; only noises which add to you feeling uncomfortable. The first loading screen you encounter is a perfect example of this. It’s really just a cute frog sitting on a lily pad. When the sound starts backing the cute frog is when panic starts to set in. There was this sense of foreboding that something bad was going to happen. All of this anticipation was achieved solely with background sounds. Nothing ever happens with the frog, but I felt a strong “I need this screen to be over” sensation due to the sound design looming over the scene.

Actually playing the game begins with the player avatar waking up in an unknown place and must piece together where they are along with the meaning of this place. During exploration there are two narrative characters, the previously mentioned Owl and a mysterious shadow creature. Each character preaches the virtues of either the light or the dark with the game culminating in a choice. The mystery of which character to believe is a decent motivation to continue with the game outside of the fun of playing.

While it’s easy to gush about the artistic elements, the gameplay isn’t as much of a triumph. Ring of Pain is still fun, but the systems here aren’t as impressive as the visuals or sound. The classic feeling of “just one more run before bed” is present. For the most part, how you’ll play a run is fairly standard though. The player avatar fights their way through gauntlets of enemies picking up items and spells with special abilities along the way. And there are a lot of items to pick up. The player has over ten different item slots, a spell slot, and a consumable item slot. Each run will have an entirely new way to play that character. 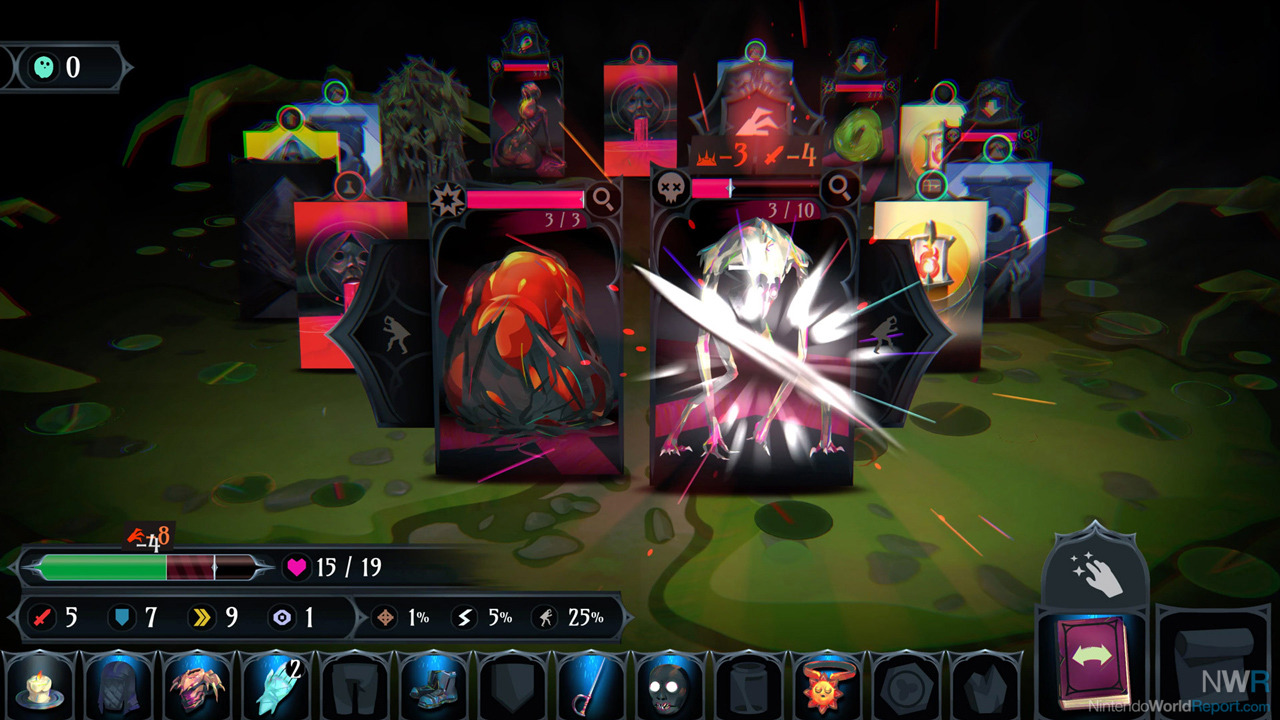 The interesting twist comes from the “ring” part of the title. All the cards of the dungeon are situated in a ring with the only intractable cards being the two in front of you. That means if an enemy card is on the current level, the only way to attack it or for it to attack you is for it to be one of the two front cards. Opening a chest requires moving around the ring until it is in front of you. Moving around the ring is easier said than done. Enemies will stop you freely moving in a direction until they are dispatched. It is possible to sneak past them, but getting caught will damage your character.

The ways to interact with each card can be altered by the items and spells you pick up. Sneak chance, crit chance, health, defense and all your other stats can be increased, but the real goal is acquiring effects. Attacks can be upgraded with freeze or knockback. A poisoned enemy will take damage with each rotation of the ring meaning they can be dispatched without actually fighting them. Knocking back an enemy who is about to explode protects you from the blast. Some of these mechanics could use a little more explanation though. It took me a while to figure out curse resistance, for example. The strength of effects causes a successful run to be predicated on RNG more than some people might like. The progression system in place alleviates that requirement somewhat, but is slow to help.

It’s weird to say that all of these usually negative qualities are actually positives for Ring of Pain. Who ever really wants to be disturbed? I don’t. However, I can’t help but admire how efficiently Simon Boxer and Twice Different can disturb. This is a game designed with a vision which was successfully executed. Playing Ring of Pain to see that execution alone would be worth it. Fortunately, there also happens to be a decently compelling dungeon crawler in there despite some pain points.