Another year, another interesting and creative array of games from the team at Jackbox.

I graciously welcome the annual tradition of the Jackbox Party Pack and the seventh entry in this venerable series upholds the humor and creativity of its six predecessors. As per usual, the five games that make up the latest collection vary in quality, largely depending on your party size and personality. After spending a chunk of time with these new games - all socially distanced over the internet - I consider The Jackbox Party Pack 7 a solid entry in the franchise, but it falls short of some of the stronger packages and features some more bugs and crashes than I have come to expect from the series on Switch. 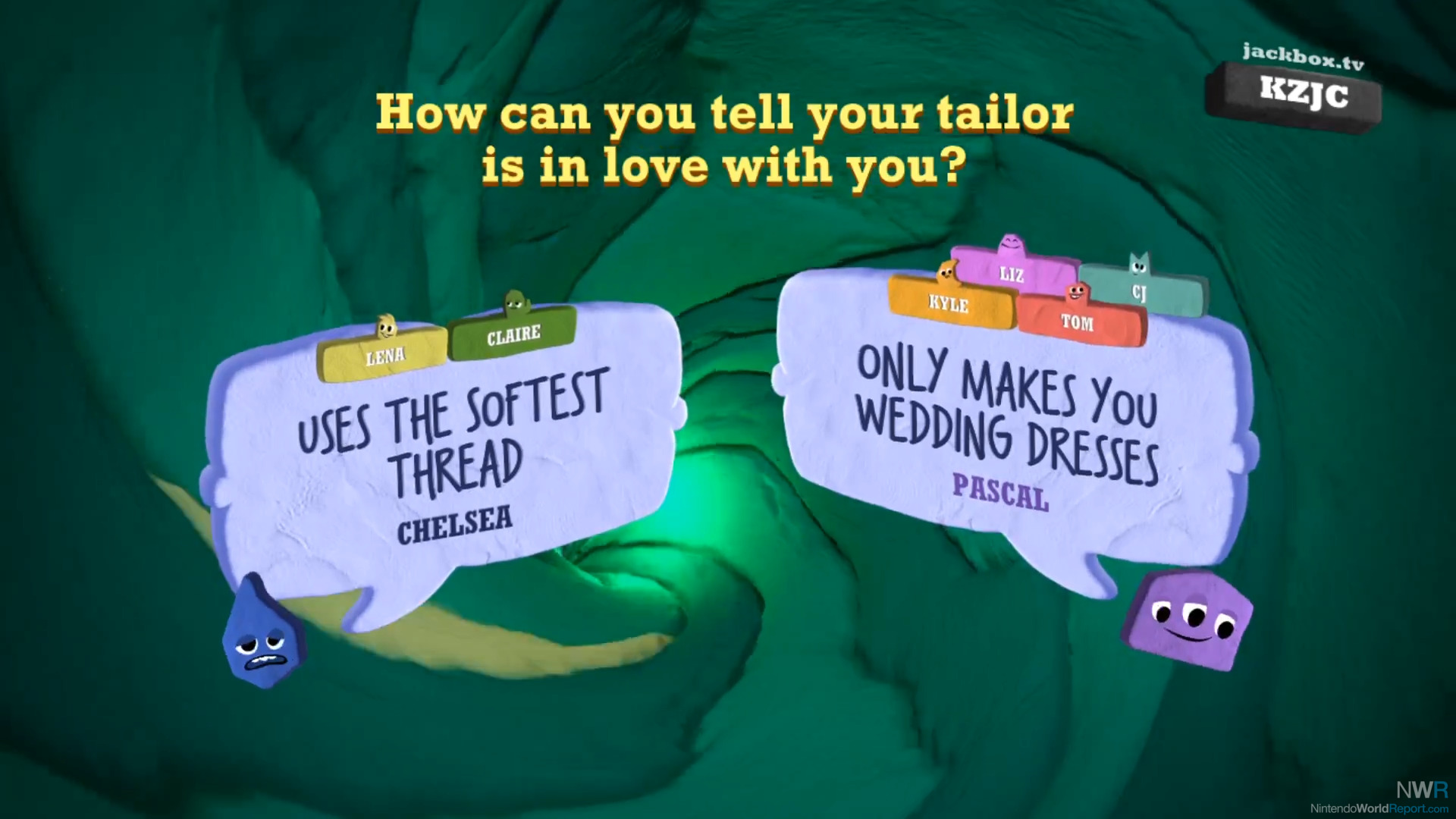 The most important part are the games, though, so let’s go run through all five. The headliner is Quiplash 3, the latest edition in the clever audience pleaser. Like other versions, each player is prompted to come up with funny answers to outrageous prompts and then the party votes on which of the two quips is the best. It’s an easy to explain game that allows ample time for tons of humor. The new version features a new final round (called Thriplash) where you submit three answers for one prompt. It adds to the comedic potential. Also, while you could make your own rounds before, the implementation of this is far better in the third edition, including Jackbox-made custom rounds. 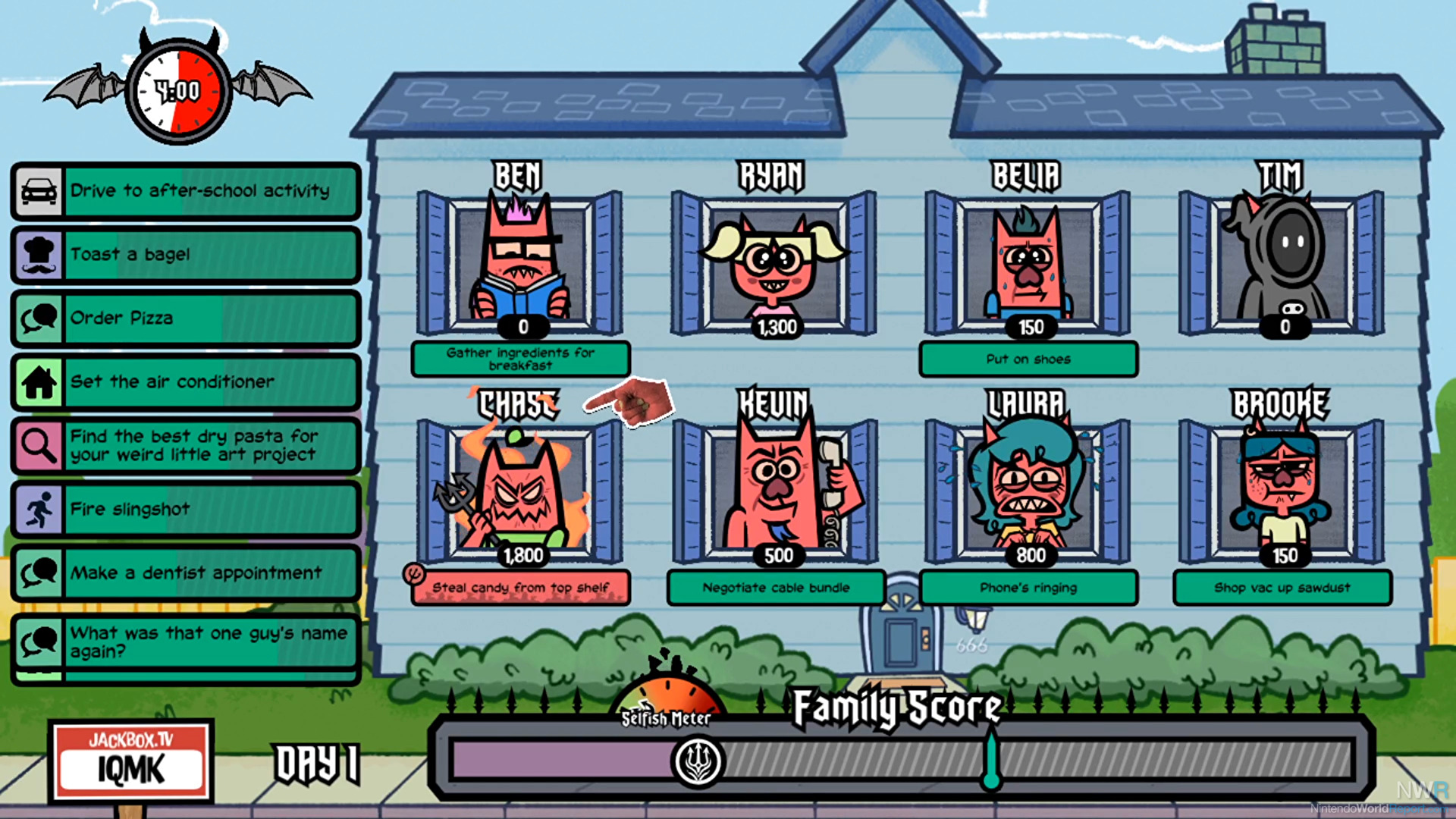 I love the absolute chaos found in The Devil and the Details, a new game that reminds me of the kinetic social mayhem of Jackbox Party Pack 4’s Monster Seeking Monster. The hook here is you’re a family of demons trying to pretend to be a normal family doing normal family things. Players take on different roles (assigned at the beginning) of adult, teen, or child. Through lots of yelling, players have to work together to complete different household tasks, all executed easily on your phone that involve swiping or rotating an item on screen or finding where certain items are in the pantry. The devil of this game is in the details, because it gets complicated. Everyone needs to work together to survive over three days of pretending to be a normal family, but someone still earns the most points and wins at the end of the days. More points can be earned by doing selfish tasks, but that could also mess up the faulty premise of this being a lovely family of normal humans and cause everyone to stop being able to do anything for a few moments. The audience also takes the role of the family cat who can disrupt things as well. I love this game. It’s insane. That all being said, in the year 2020, this isn’t as much of an ideal big-group streaming game. It involves a lot of frantic yelling that can be difficult to sort out on a Zoom call. Once we can all safely hang out in person, I look forward to playing this game in what I believe is its optimal setting. 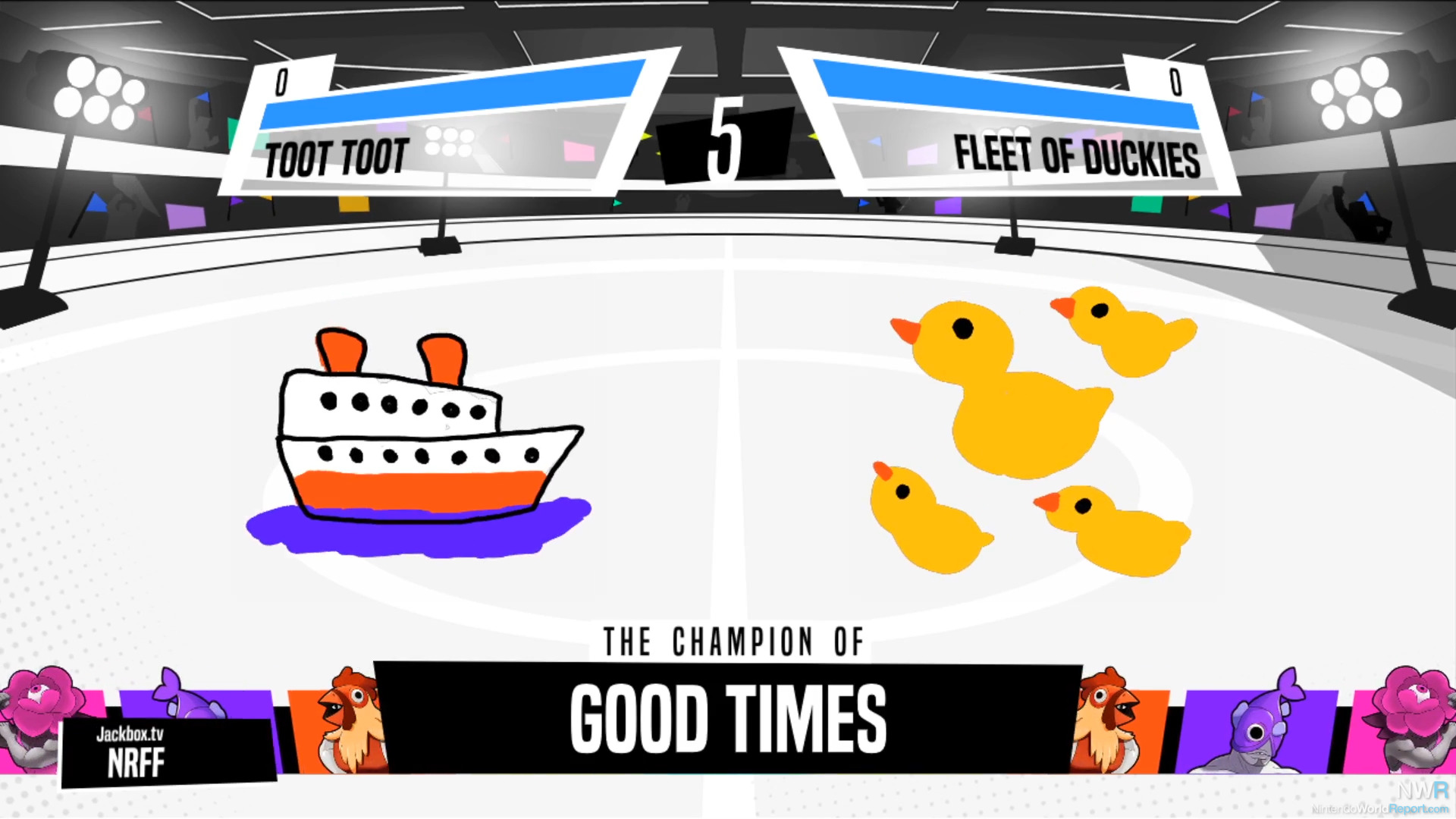 Champ’d Up combines the drawing charm of Tee K.O. with the voting insanity of Bracketeering. Considering those are two of my personal favorite Jackbox games, this pairing is awesome. Like Tee K.O., the early goings are slow as everyone has to draw two characters to enter into the contests. Once the voting gets started and the monstrosities everyone created are shown, the whole game takes off. What makes it even better is in the second round, you can swap out between your different creations. And if you play a few games with the same group, you can continue to pull from your past creations. This also does the thing that is most important for Jackbox’s drawing games, where even if you can’t draw, you can make something funny. 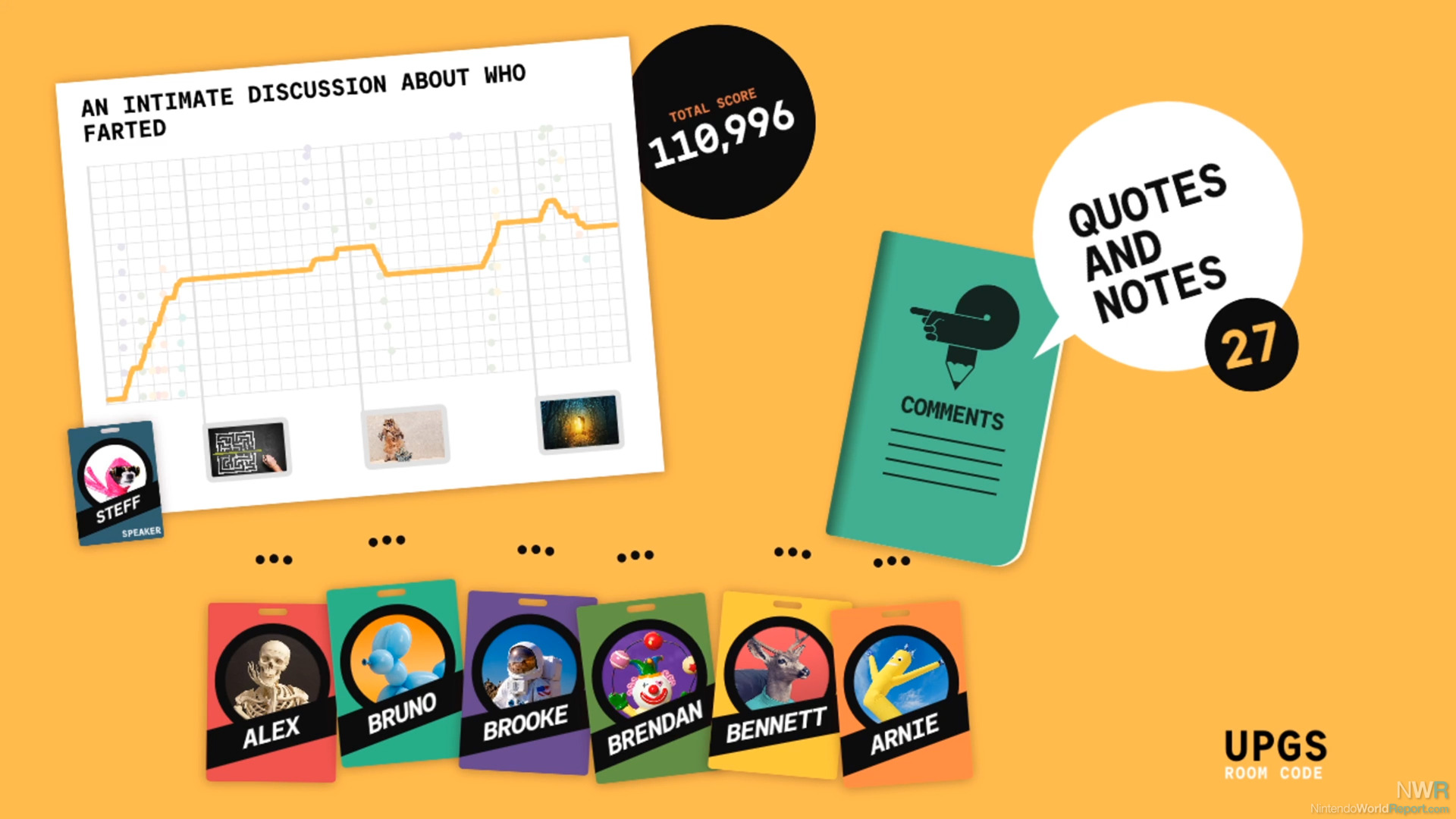 Talking Points is basically just an improv exercise in game form. Given a theme, you have to give a speech about the topic, but another player plays the role of your assistant, so they get to decide what text and images are shown to the masses to guide your presentation. You need some buy-in from your players; it doesn’t work as well if people don’t want to break out some improv skills. The rest of the field can thumbs up or thumbs down the presentation, which results in a final score split between the overall engagement and the positive reactions. That last bit is the funniest part of this game because it’s just like actual YouTube. 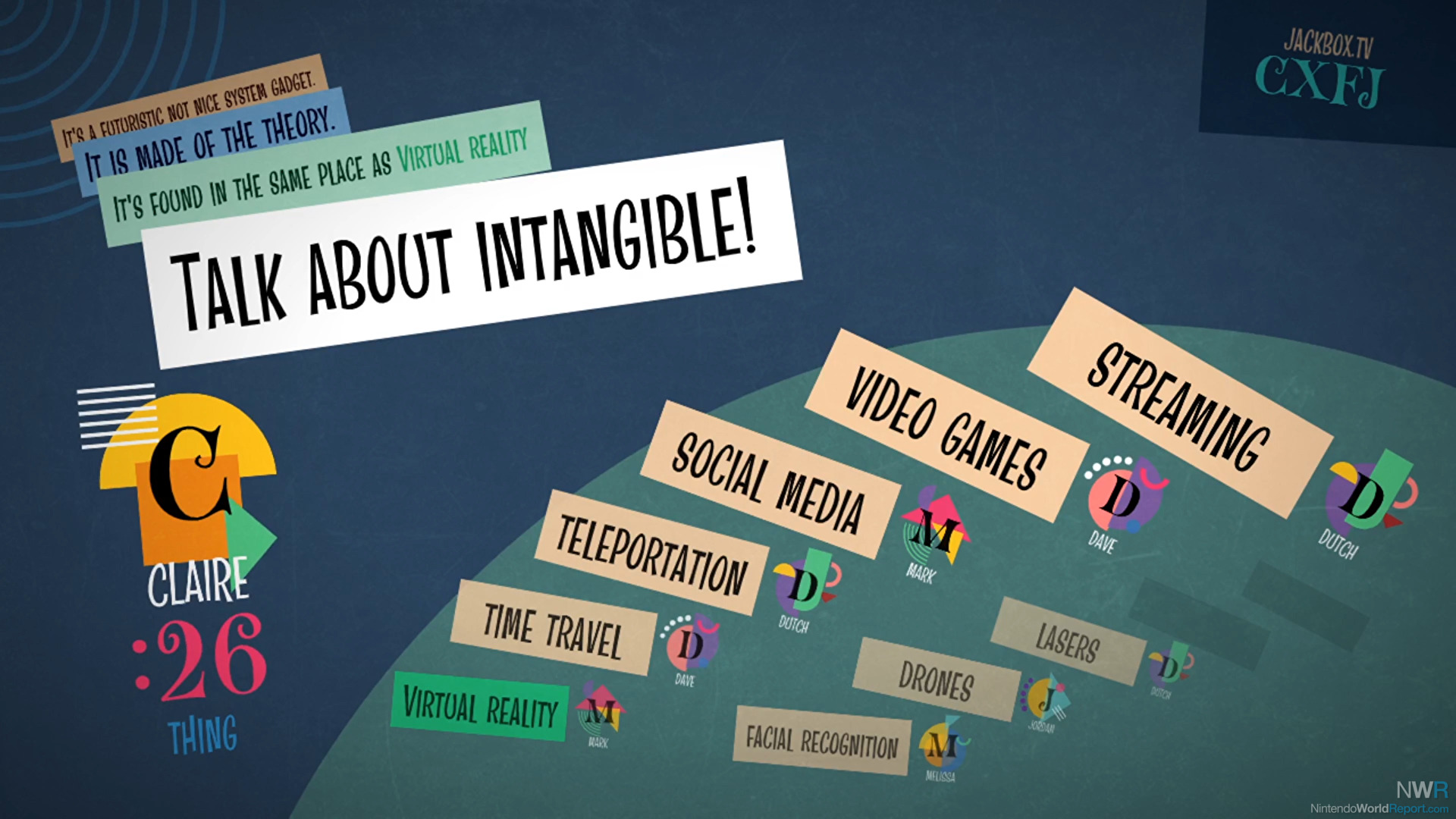 Now we get to the final game, which was both the most buggy and the least enjoyable. Blather ‘Round is a take on charades where each player has a pop culture-related prompt. You have limited words to give an initial clue and during the part where other players guess your prompt, you periodically can choose between a few teasing sentences to try to give them more hints. In practice, it’s a neat idea, but in execution, it didn’t quite work. A number of the words you could select from just didn’t display during my time with Blather ‘Round. So clues were shown as “Blanky Creature” as opposed to “Round Creature” (I had Pac-Man as a prompt!). Hopefully a future patch remedies this, but it held back this game from being that enjoyable.

Related to the technical issues, I had a few game crashes on Switch. Your mileage may vary and as of this writing, Jackbox is rolling out updates to other platforms, but this seems rougher around the edges than past games in my experience. Maybe it’s just 2020, but it happened enough to warrant mentioning.

Party Pack 7 does add a wealth of moderation options, which is great. For example, a moderator can approve Quiplash entries before they’re even shown. More accessibility options are included, too. Subtitles were brought in with last year’s release but they return here. There’s even a way to have the room code read aloud. It’s great to see accessibility be a priority as this series closes in on the double digits.

The Jackbox Party Pack 7 might not be the best entry I’ve played, but it’s still a great collection of fun, innovative party games. The degree of customization and accessibility is fantastic. Sure, some technical issues might be plaguing the Switch version right now, but even with some speed bumps, the likes of Quiplash 3, The Devil and the Details, and Champ’d Up are likely to become new game night staples. Hopefully they won’t have to be on Discord and Zoom for the rest of time.