A bite that's a bit hard to chew.

The first thing you notice about Bite the Bullet is its soundtrack. Its intensity is very fitting for the atmosphere of the game and about the only aspect that does not feel like it has elements out of place. The title screen and gameplay are reminiscent of the old arcade-style of gaming, the kind of multiplayer games where you could button-mash your way through levels. So I grabbed a friend to play cooperatively for the first level, however, that was a big mistake. The main issue with the two-player mode is the second player keeps teleporting back to the first player even if they are only a couple of inches away. This means you could be in the middle of a jump or shooting and suddenly die from being teleported back onto a set of spikes. The majority of the game is spent shooting and eating your enemies so with two players shooting everywhere, you forget to leave the enemy at low health to eat them. Despite the game being in the style of the old multiplayer arcade games, it is definitely made for single-player. 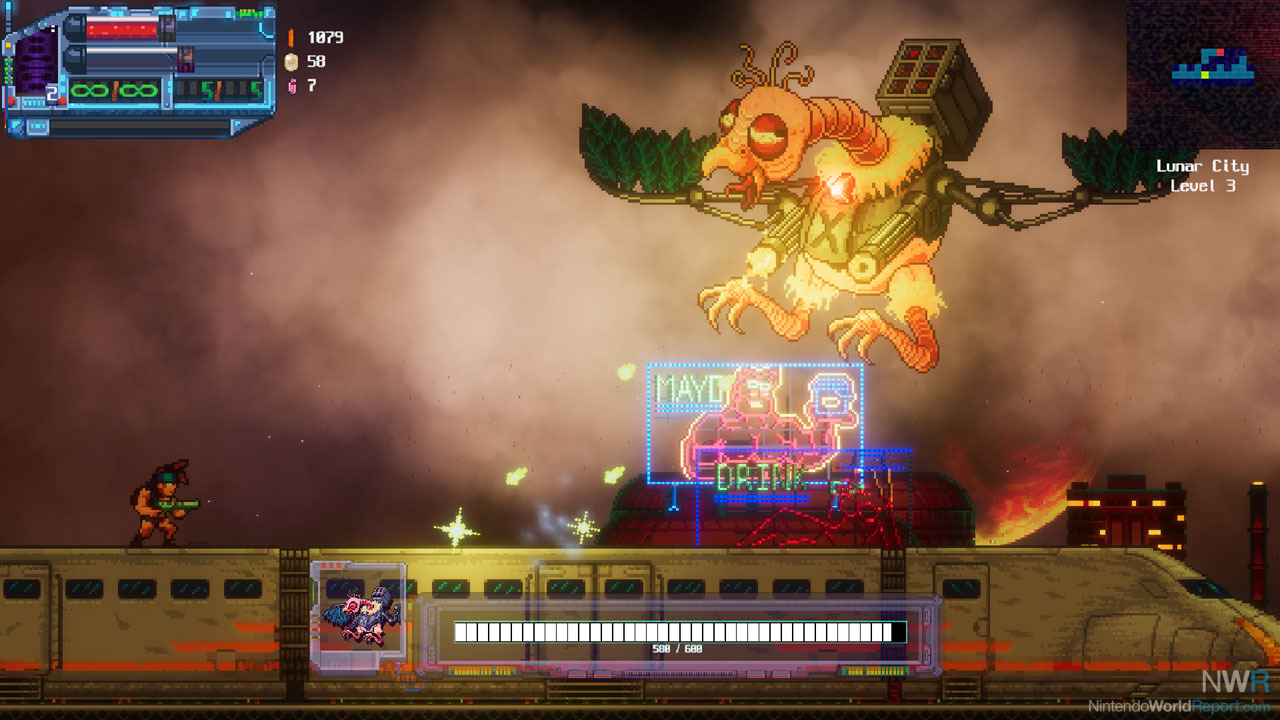 The tutorial is extremely short, so the game just starts you off right into the gameplay. This would be a good idea if it was not for the overcomplexity of the game, some of these aspects are great and others just add too much. The buttons are opposite of what they usually are in every other Nintendo game (you can change this, but it is not an easy fix, you have to figure out the other control sets on your own). There are plenty of types of enemies that are divided into different categories (Plant, Metal, Meat, etc.) and they each have a set of information that appears every time you go to eat them. You have to figure out on your own that each of these foods is attached to the skill points you acquire on a GIGANTIC skill tree which has divisions for Vegetarians, Meat-eaters, and more. It is horribly overwhelming when you conquer your first level but with a lot of trial and error, it becomes apparent how it can help you during levels.

The two most frustrating components of the game were the occasional freezing, which happened a number of times on my Switch which has never had a problem before. The second is it took me four runs of the first level to figure out I had to do specific objectives before I could play other levels. 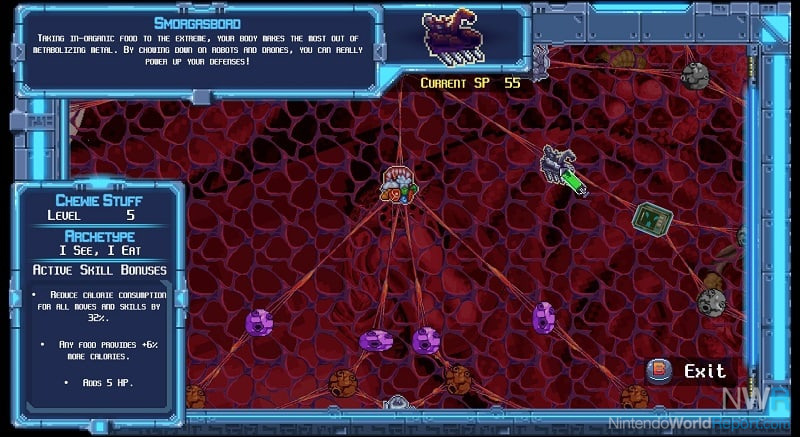 After the initial obstacles of becoming accustomed to the game, it starts to become fun and the shooting and eating become satisfying. The story of the game is nothing revolutionary, there were some humorous moments but the majority of it I just wanted to skip through. The gross sounds for when you start chowing down on one of your enemies feels right and the splatter of blood that comes with it shows that there was time spent onto the visual and audio aspects of the game. There are plenty of levels and unique side quests which sometimes are difficult to navigate as the teleporting within the game have all the same animations.

Although I had to drag myself to complete all the objectives of the levels, I could see this game being highly entertaining for the right kind of audience. If you like the arcade-style shooting games but want a twist on the gameplay, it could provide you hours of fun and you can really dive into the different skills and components of the game. As long as you do not get too overwhelmed at the beginning.

The most unfortunate thing while looking back at this game is how fun it could have been if they focused less on adding so many ideas and just focused on the idea of shooting and eating and making it accessible for all players. If they had done this and made the co-operative function of the game cleaner, this would be a game I would love to play to kill time when I had my friends around and wanted to play something easy but unique. Then the humorous ideas around the idea of eating, belching, getting too fat by overconsumption, and more would all shine even more with multiplayer.