It didn't feel like a tall order, but this port doesn’t deliver.

Cloudpunk’s visual style and setting is what really spoke to me when I first became aware of the game. It feels like it ripped a page straight out of futuristic fictional cities like Blade Runner’s Los Angeles. Working for a semi-legitimate delivery company where the two main rules are to never miss a delivery and to never ask what’s inside the package, it had the potential of being an actual science-fiction punk game, of which there are far too few. The premise of Cloudpunk is exciting, which makes it all the more disappointing that this port on the Switch feels lackluster in both content and presentation. This version is not the revolutionary future envisioned in the world of Nivalis.

Editor's note: I'd like to mention that the trailer above seems to show gameplay captured on the PC version of the game. The footage above is not comparable to the Switch version at the time of writing this review.

It follows the story of a woman named Raia, who has just moved to the city from the countryside. She decides to work for a semi-legal delivery service called Cloudpunk and has to deliver packages all over the enormous city of Nivalis in what can only be described as a literal flying car. While traveling you get to learn more about Raia, the city, it’s inhabitants and the many different groups striving for control. Let’s start off with the positives. Cloudpunk has a style all it’s own. Using a voxel-style and a lot of different lightning shaders, the world truly comes alive. The same can be said for the unique characters you meet along the way. From your AI companion Camus to the control headquarters of Cloudpunk, many interesting figures await you in the world of Cloudpunk. I was also expecting all of the gameplay to take place within the flying car (HOVA) itself, but surprisingly enough, you are free to park the HOVA at certain locations and explore the city on foot. You can either play the game like this in first or third person, which made the experience feel quite unique. Finally, the controls are pretty sharp when using the HOVA itself. Turning feels good, even when traveling at a higher speed, and the ability to move vertically at any time gives you more ways to move to your destinations.

But the core gameplay is where the cracks in the foundation of this part start to show. Almost every mission requires you to simply travel from point A to B with very little in between to keep you engaged. You have to keep an eye on your money, fuel and damage, but there’s no time limit or rating on your performance as a deliverer. Sometimes you can make decisions that impact the narrative, but apart from one of the earliest choices, there’s very little there to keep you invested in the gameplay. The same goes for exploring the city on foot. It feels incredible at first as it feels like this huge city is yours to explore. But the walking speed is very slow and accessing parts of the city on foot can be confusing and annoying due to the large layout of the city. Additionally, while you can talk to merchants and vendors to purchase items, they add very little value to the experience aside from cosmetics for Raia. All parts of the world in Cloudpunk feel like they were added to make the world feel larger and lived in, but as a player it makes the game feel tedious and gets boring quickly. For example, while there are specific districts for clubs, hotels and residents, there is very little that visually make them feel distinct. All you end up doing is entering similar looking buildings, talking to an NPC to receive a package, traversing along roads that are hard to tell apart to finally deposit the package in a specific location or leave it with another person. The stories told through these deliveries can be interesting in the moment, but fails to leave an impression afterwards. 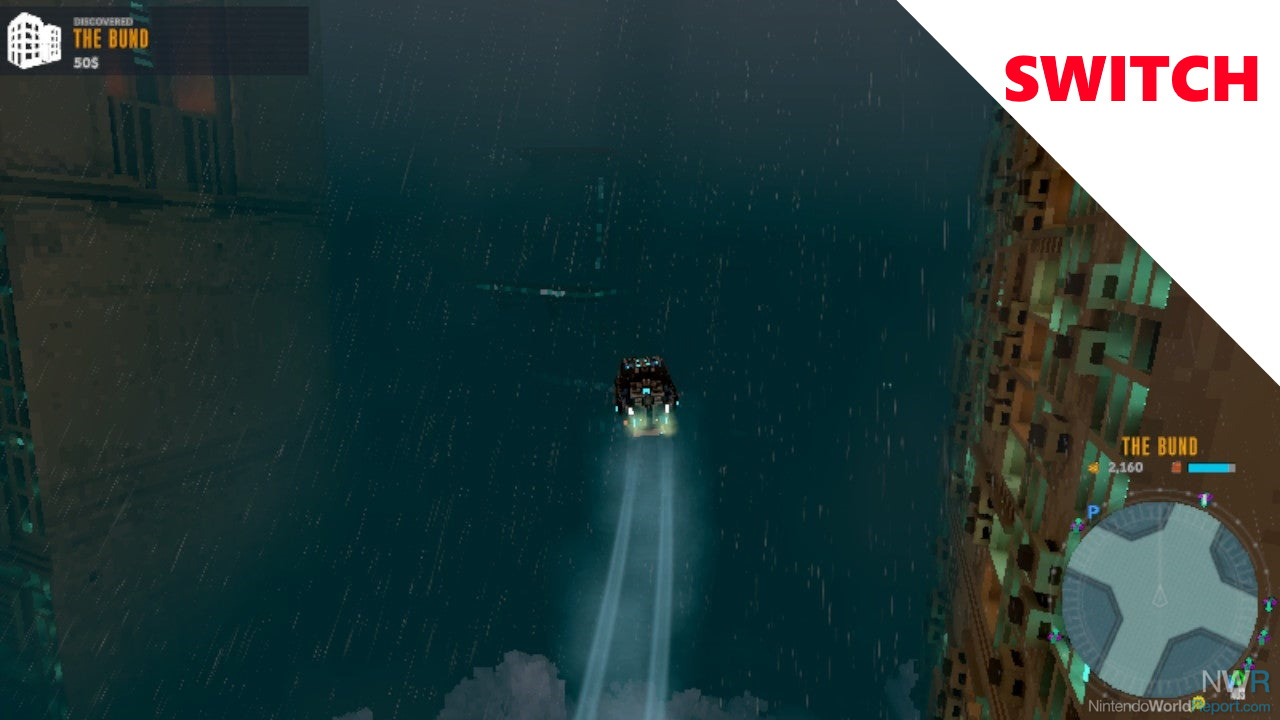 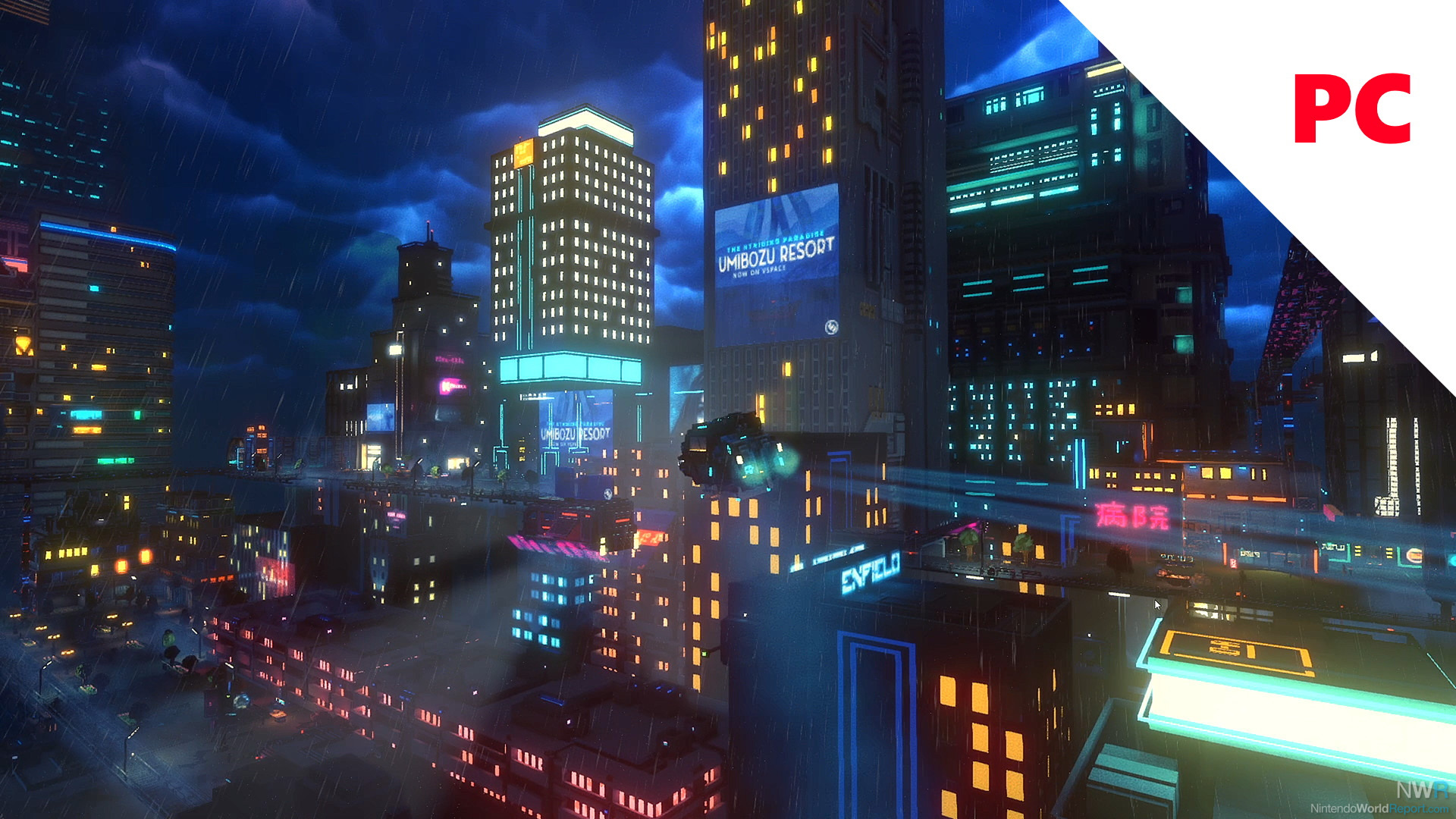 Editor's Note: Here is a visual comparison between both the PC version and the Switch version of Cloudpunk. The graphical videlity is usually something I like to refrain from calling out this explicitly, however I feel it's necessary due to the misleading presentation of Cloudpunk in it's marketing materials for this version of the game.

The performance is what ultimately brings down the experience on the Nintendo Switch. The game runs at infrequent framerates. Hovering around 30 frames per second, but often dipping below 20 when many objects are on screen. Then there is the draw distance. I can’t quite remember a game from recent memory where the draw distance was as limited as it is in Cloudpunk on the Switch. While many other games could get away with a shallow draw distance, Cloudpunk wants you to be fully engrossed in its visually distinct world. But when other HOVA’s pop in and out of view and buildings appear last minute when you approach them, it stops the experience from being engrossing or even entertaining. Several UI choices, such as the method of purchasing items, and not being able to skip voice acted lines also add to this overall disappointing experience. Putting the switch version side by side with its PC release from earlier this year is like comparing night and day.

That last part really sums up how I feel about Cloudpunk on Switch. I’m pretty sure that underneath these performance issues there is an interesting world ready to be explored. But the game’s problems run deeper than it’s graphical shortcomings. The pacing feels slow and doesn’t give the player many options to fully explore the world that is being presented. If Cloudpunk looks interesting to you, I’d highly recommend you look into other possible versions you might be able to play, because the Switch simply isn’t the place to explore the city of Nivalis.