Witcheye’s story begins when a smarmy knight sneaks into a witch’s home and steals her valuable possessions. As the knight runs off, he accidentally leaves behind a trail of gems and spell ingredients. To track down the thief, the witch transforms into a flying eyeball and sets off on an adventure across six colorful worlds (and over 50 levels). I’m a fan of how the story reverses the roles of the knight and witch, turning the standard trope upside down on its head. 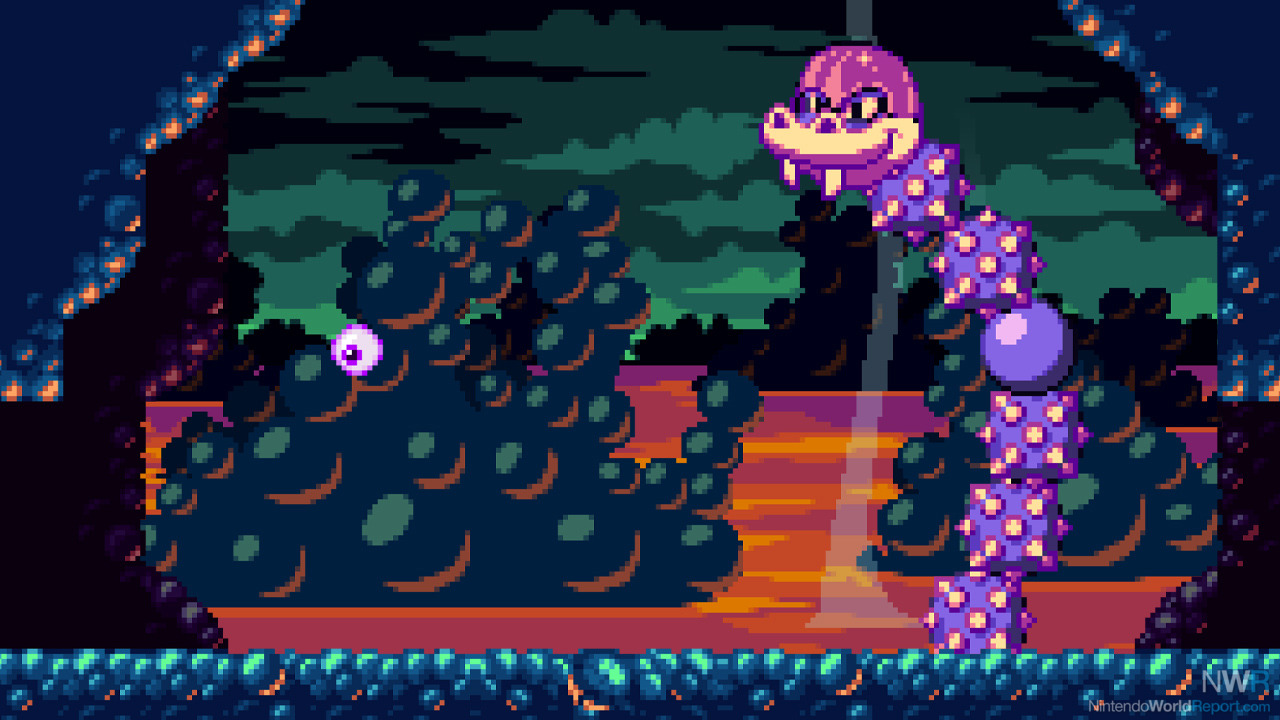 Originally developed for mobile devices, Witcheye’s gameplay can be best described as “Breakout” meets the side-scrolling platformer genre. It’s not deep or complex, and it’s not an experience that demands to be played on a big-screen television. The mobile version was designed around a touchscreen where swipes and touches controlled movements. By comparison, the Switch version attempts to port those touch controls to more traditional inputs – buttons, sticks – with mixed results. Switch’s traditional controls don’t work quite as well as touch controls, but they’re still good enough to get the job done.

Getting yourself comfortable with the controls requires time and patience. Flicking the analog stick sends your eyeball flying into different directions, bouncing off surfaces wildly like a rubber ball. To regain control, you can press one of the face buttons – A, B, X, Y – to instantly stop your eyeball in its current position. Stopping your eyeball is helpful before rushing toward an enemy. For instance, some enemies have the ability to block or dodge your attacks, forcing you to attack from a specific angle or position. 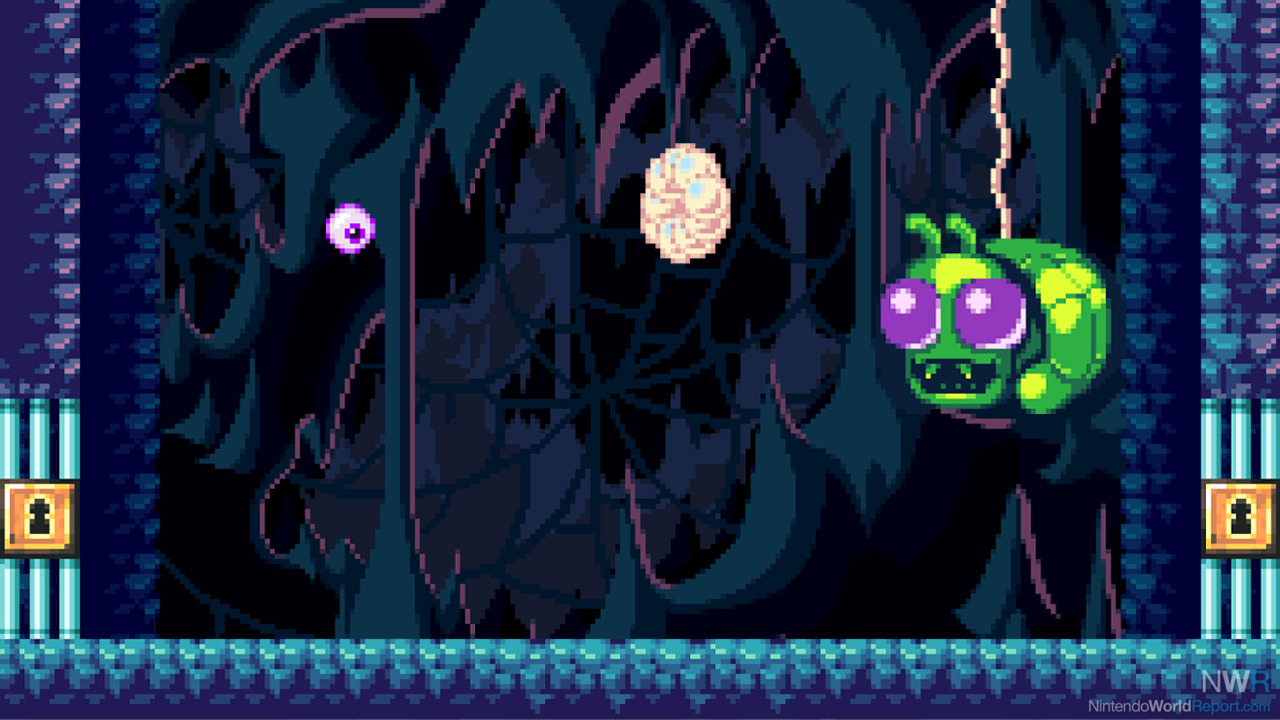 Collectable gems are scattered across each level, hidden inside breakable boxes and secret locations. Many enemies are also carrying gems and must be defeated to obtain them. Boss fights are a major highlight, but don’t expect to defeat most of them on your first try. Since boss sprites tend to be very large, getting around them can be challenging. It’s important to study the movement patterns of enemies and bosses to anticipate their attacks. Each boss requires different strategies to defeat them.

The presentation almost feels like something that could’ve been developed by HAL Laboratory. Colorful visuals, cutesy characters, and cheerful music all reminded me of the Kirby series. In fact, some of Witcheye’s enemy designs wouldn’t look out of place if they were thrown into a Kirby game. Due to its rich and vibrant color palette, the pixel art looks like it was created in the vein of Game Boy Advance. 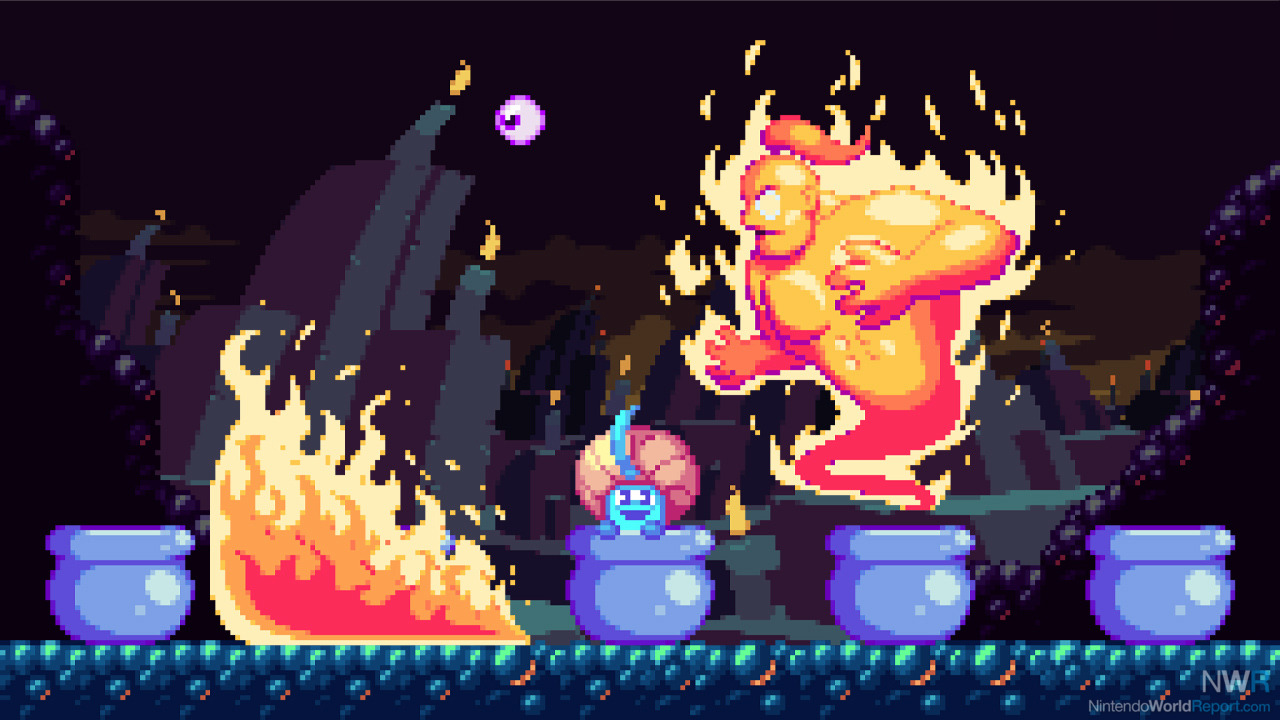 Similar to HAL’s Kirby series, Witcheye is not a long game. Most experienced players should be able to complete the game in a few hours. Speaking for myself, I found it refreshing to play a shorter, tighter game that doesn’t overstay its welcome. It can be enjoyed in short bursts or completed entirely in one sitting. While some players may feel turned off by the short length and lack of depth, I appreciate and admire Witcheye’s simplicity and narrow focus. It’s a game that knows exactly what it wants to be, and it never tries to be anything else.

Moon Kid’s Witcheye is a very fun, unique twist on the platformer genre, but it could also be described as a one-trick pony. Based around a single gimmick, the gameplay gradually wears thin over the course of its brief length. And truth be told, the unique controls won’t be everyone’s cup of tea. However, Witcheye is still a very solid recommendation if you’re seeking a kid-friendly, Halloween-themed game to play this October.