Putting the Planet back in Planet Puzzle League.

The Panel de Pon / Puzzle League concept hasn’t been iterated on as much by Nintendo in recent years, aside from the original Super Famicom Panel de Pon hitting Nintendo Switch Online earlier this year. So when we received the code for Flipon and the description was “it’s basically Puzzle League?” that was all I needed to hear. And it is close to Puzzle League, but has enough oddities to make it distinct enough from the Japanese freebie most of us got.

Befitting a game with the subtitle “Space Puzzle Adventures," the first boot of Flipon flings you straight into the story mode. It’s basically an excuse plot to try out different rule sets and get used to the scoring systems. Your main character Kat is roaming the galaxy collecting “Flipblocks” by swapping the positions of two colored/shaped icons to make matches of at least three in a row (horizontally or vertically) to remove them from the board. Unlike other games of its ilk, Flipon stops the board every time a match is made and starts a countdown timer that can rack up points quickly so long as you can keep making matches to keep the multiplier going. It’s possible to chain clears as well, though I found that the kind of clears known as “skill chains” in Puzzle League were a lot harder to pull off. 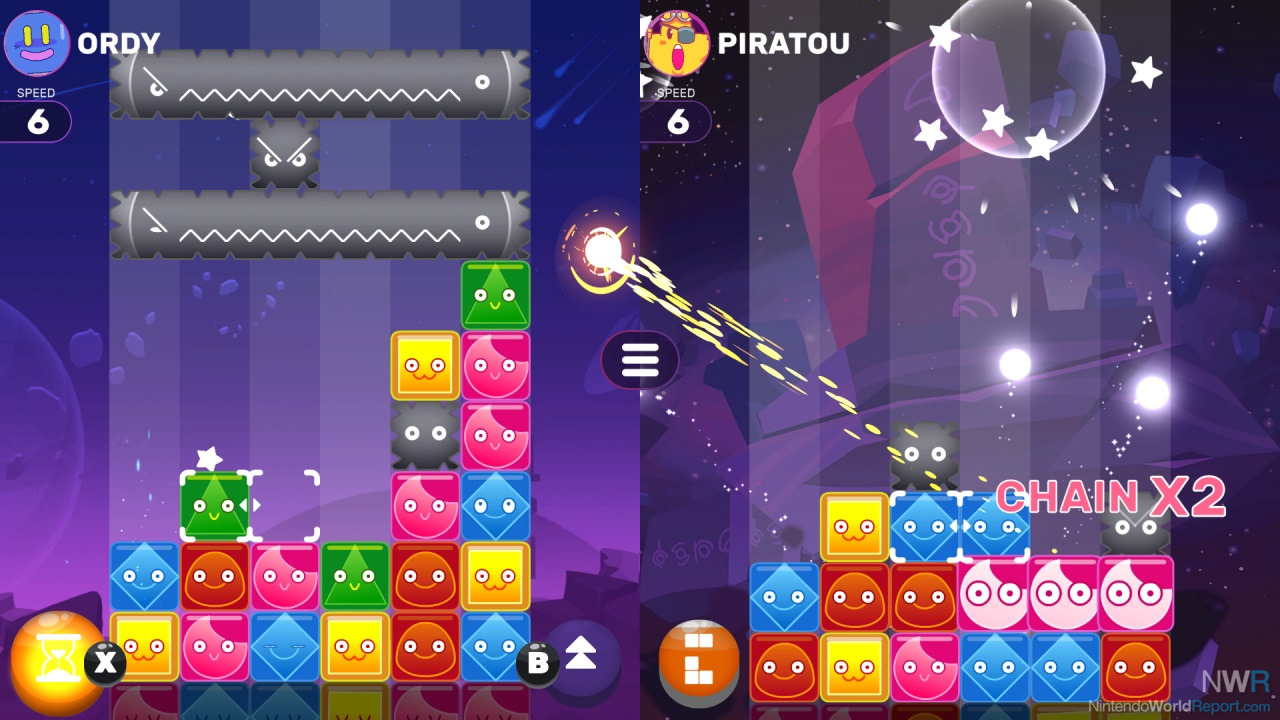 The story mode itself is basically an excuse to play with the different rules. Some stages are time-based survival, some require a certain number of points or types of clears, and some are “puzzle” stages where a fixed board setup has to be cleared entirely. There are also battle stages, where Kat or one of her companions battles robots, aliens, and a tentacle monster who is as horny on main as the ESRB E rating will allow. Later stages add modifiers to the blocks such as “windy” blocks that appear on the top of the screen, “shy” blocks that randomly replace with question marks, and “unstable” blocks where the entire field randomly changes colors. The versus stages and some regular stages also feature garbage that can be cleared by touching it, but the usual strategy of building up a bunch of garbage and making one clear to transform it into switchable blocks doesn’t work here. Flipon strictly enforces the “must touch garbage to clear it” rule, and the ability to transform all garbage on screen is the final special power that can be unlocked during the story.

The garbage rules are one of the stumbling blocks in the story mode, which has a difficulty ramp that includes random high steps for some reason. Some of the puzzle stages are upside down with the blocks at the top, and the later versus modes have incredibly aggressive CPU opponents. Exiting the story mode for a breather leads to the game’s other modes. The Versus mode (which supports up to 4 players - locally only - or one CPU) allows for the use of all characters (10 in all) and powers unlocked to that point. There’s a Score Attack mode with online leaderboards that I enjoyed being at the top of for a couple of nights pre-release, and a Challenge mode that offers randomly generated puzzles or clear stages for trying. It’s a basic set of options but pretty much all I’d ask for in a puzzle game.

The developers of Flipon have done a good job with making the playfield easy to navigate for everyone - blocks are differentiated both by a distinct color and a shape for those who are colorblind in some fashion (moons, rounded objects, squares, diamonds, triangles). I did notice that the scene transitions coming out of levels in story mode had unusual behavior, showing the previous stage in the background almost like a broken chroma key. It was incredibly distracting, and I hope it was unintentional and will get fixed. There’s no voice in the story mode, and the music can be a little loud in addition to sounding somewhat grating to my ears. It’s a good game to clear a podcast backlog to.

It won’t take long to play through Flipon if you just want to say you beat a game in 2020, and the core gameplay is addictive enough that I’ll probably keep the game on my Switch in the same way I kept Puzzle League Express on my 3DS. There’s some technical troubles, and I’m still trying to get used to the chain timing, but someday I’ll manage to clear that 200,000 point in five minutes wall Flipon threw at me.

A review code was provided by Plug-In Digital.