This time it ain't just about being fast.

Editor's Note: Tire audio can actually be adjusted in game via a slider.

If you've ever dreamed of whipping burning rubber down switchback roads in your Toyota AE86, Inertial Drift by Level 91 Entertainment might just be the game you've been waiting for. While licensed cars are nowhere to be found, it's obvious the developer doesn’t shy away from their inspiration. Inertial Drift knows exactly what kind of game it wants to be, and it delivers on that vision. This high octane, high skill-cap arcade racing game focuses its efforts around the often implemented but rarely emphasized mechanic of drifting.

From it’s tracks to car designs, the art direction is seeped in a vibrant Outrun styling mixed with some seemingly familiar references to fans of the sport and its media. A bright neon pallet paints the screen, whether you're skidding through a metropolis, a sandy coastline, the rolling peaks of a snow-covered mountain or even the in-game menus. There's never a shortage of visual style in Inertial Drift. That's why it is somewhat unfortunate that the Switch itself isn't up to the task of showing all the game has to offer. Sacrifices were clearly made to get this running on Nintendo’s hardware. Docked resolution in particular seems to take a hit, and the result is a lack of visual clarity. While this might not sound like a particularly noteworthy gripe, it does have a direct impact on gameplay. More on that in a moment. 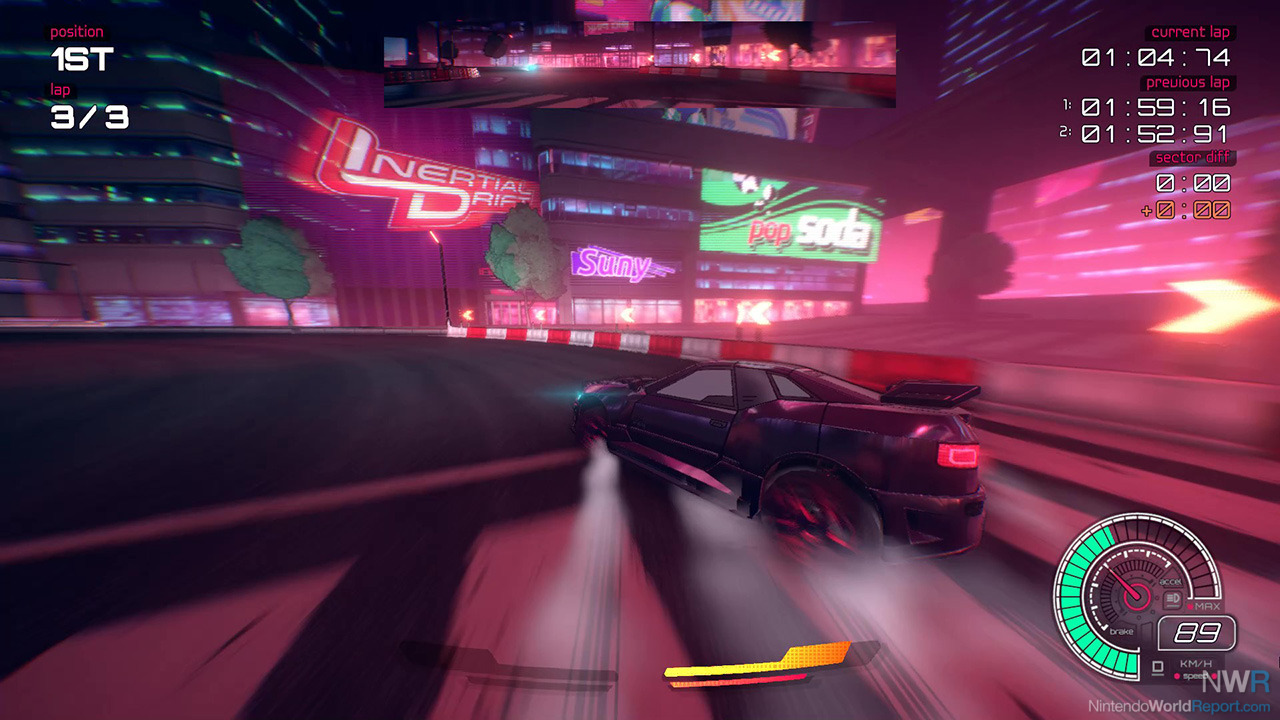 Inertial Drift takes a unique approach to its driving mechanics. During your time drifting through the technicolor landscapes on your way to the Summer Grand Prix, you'll be using an interesting control scheme. Inertial Drift lives up to its name by having a joystick entirely dedicated to drift controls. The left joystick for steering and the right for drifting gives this game a one-of-a-kind, twin-stick racer feel—at least the first I've had the chance to play. There’s a learning curve to be sure, and a tutorial is available, but it's not as robust as it could be. Therefore, as ironic as it sounds, you might want to take it slow to start. I would advise beginning with one of the lower difficulty cars. That said, once you get a grip on one of the 16 total cars available in the game, it is oh-so-satisfying.

There’s a refreshingly wide array of game modes for this budget title. A series of single player options are available, like a story mode, told through visual-novel type character interactions between races with four available characters to choose from (one of which is locked until you've completed your first playthrough). Each character has their own short stories, motivations, and difficulty level, though course progression remains similar between all four. A Challenge mode sees you take on trials for individual vehicles. Finally, an Arcade mode grants free reign of the tracks to participate in practice, time trial, and race modes. Making use of that practice mode and learning these tracks as though they were your childhood backroads is something you'll want to do. 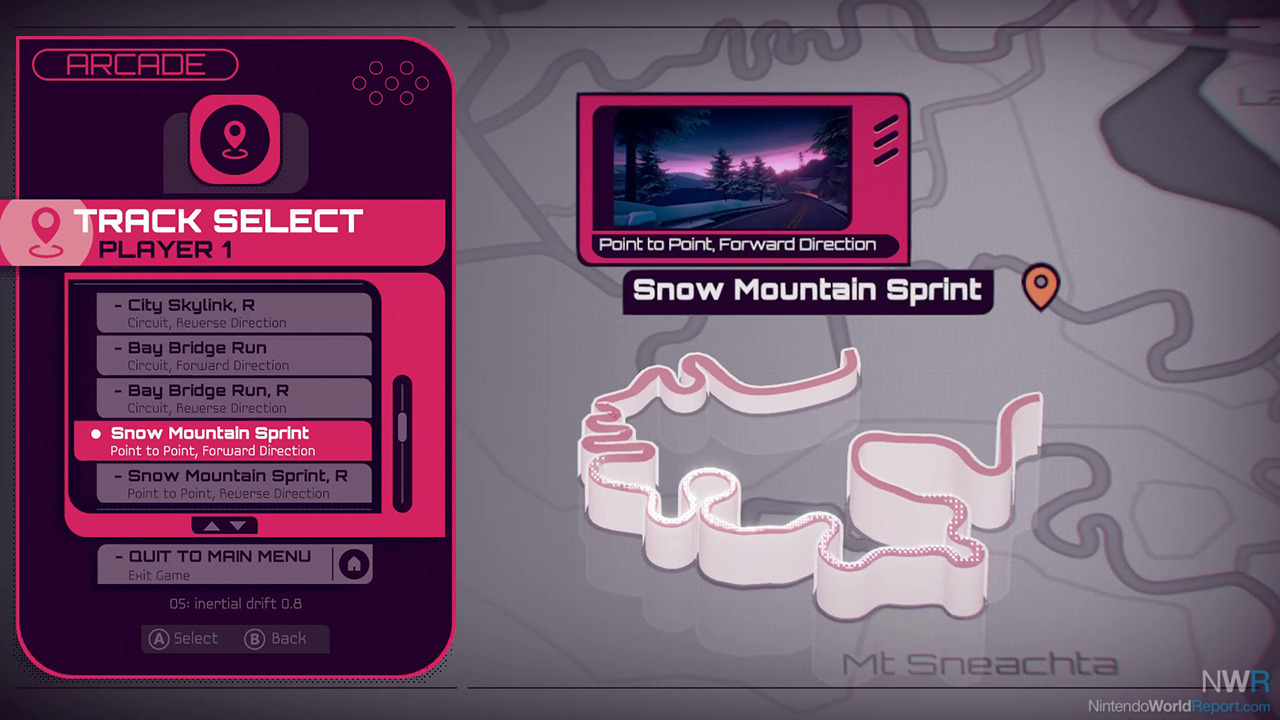 You see, within every mode of Inertial Drift you will notice one glaring omission: a minimap. The other half of the game’s challenge, after grasping the controls, is knowing each course. Without the track map,the player becomes forced to look for indicators on the road ahead,or else just memorize each upcoming turn. This is where the aforementioned resolution becomes a problem. There's sometimes a shortage of visual information to properly judge your next move. Of course, this is remedied with repetition, but it means you're unlikely to have a clean or even moderately successful run on a course's first attempt. Progression through the campaign at times becomes more tedious than fun, and I found myself dropping the difficulty, being forced to restart the story with a different vehicle, in doing so.

As far as the audio is concerned only the truest of gear heads will find any enjoyment here. There are some catchy tunes offering synth beats to the game's menus and tracks, but the audio otherwise feels like an afterthought. That may be in part to the fact that you’ll hardly ever hear any of the game's background music. Get used to the sound of squealing tires and burning rubber. The drifting audio overpowers everything else in the game and may as well be the only audio included due to its frequency. 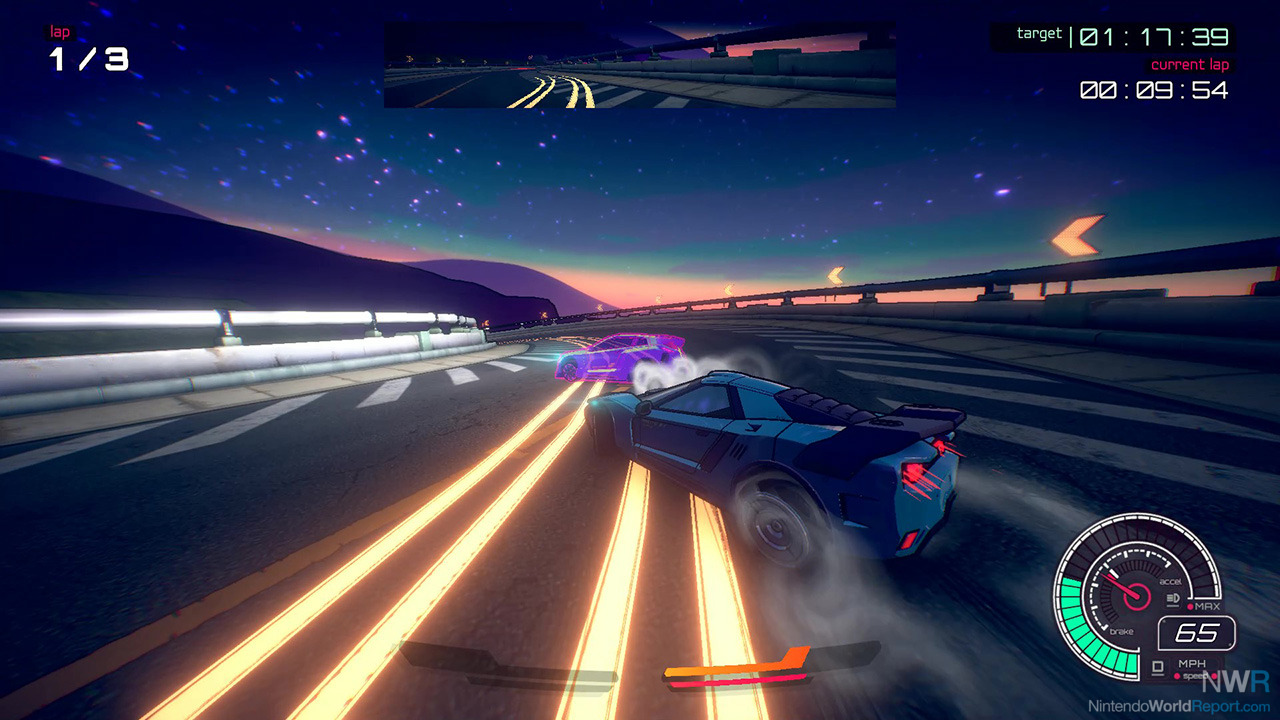 Audio, visual and even learning curve frustrations aside, where Inertial Drift really gains traction is in its online and local multiplayer. The former unfortunately seems to suffer from low player count and long matchmaking times, but thankfully when I eventually found an opponent my experience was smooth and issue-free. While online matches are tense and enjoyable, nothing beats the at-home experience of challenging a willing friend or soon-to-be racing rival with local split screen. This was easily the best time I had with Inertial Drift and the game gained a few unexpected new fans in the process.

Despite some concessions being made to the Switch version of Inertial Drift, there were few performance issues beyond the resolution. Slight frame drops at the start of every race are a curiosity that disappears quickly, but I did have one complete crash. Overall, the gripes with Inertial Drift that I had hold it back from realizing its full potential. Nonetheless, most issues can be overlooked when the sheer enjoyment you'll feel hitting the perfect drift line is undeniable. With a robust amount of content and a rarefied local multiplayer, this is an easy recommendation for fans of the genre.