A heartfelt turn-based RPG with a surprisingly brutal combat system.

Ikenfell is a love letter to 2D JRPGs. It takes place almost entirely in the titular Ikenfell, a school for magic, and revolves around a girl’s search for her missing sister. In some ways, it’s an incredibly accessible and familiar experience; moving from location to location, exploring small dungeon-like areas, and completing each of the eight total chapters doesn’t present a very daunting challenge. That is, until the punishing tactical combat with its timed attacking and defending breaks a magic wand over your head.

Heroine Maritte is an ordinary girl, not blessed with magical capabilities like her sister, Safina, but when the latter disappears, it’s Maritte who strikes out on her own to solve the case. Along the way, she encounters various students and professors of Ikenfell who end up joining her cause, as the mystery surrounding Safina and the school grows ever more complex. Divided into chapters, the story moves along at a fairly brisk pace, but each one follows a similar template that grows a little stale by the end of the game’s 8-10 hour runtime. Find a clue that leads you to a new area of the school campus, meet a new character who either joins you or points you in the right direction, complete a small dungeon, and then fight a boss: that’s the formula you’ll see half a dozen times in Ikenfell. 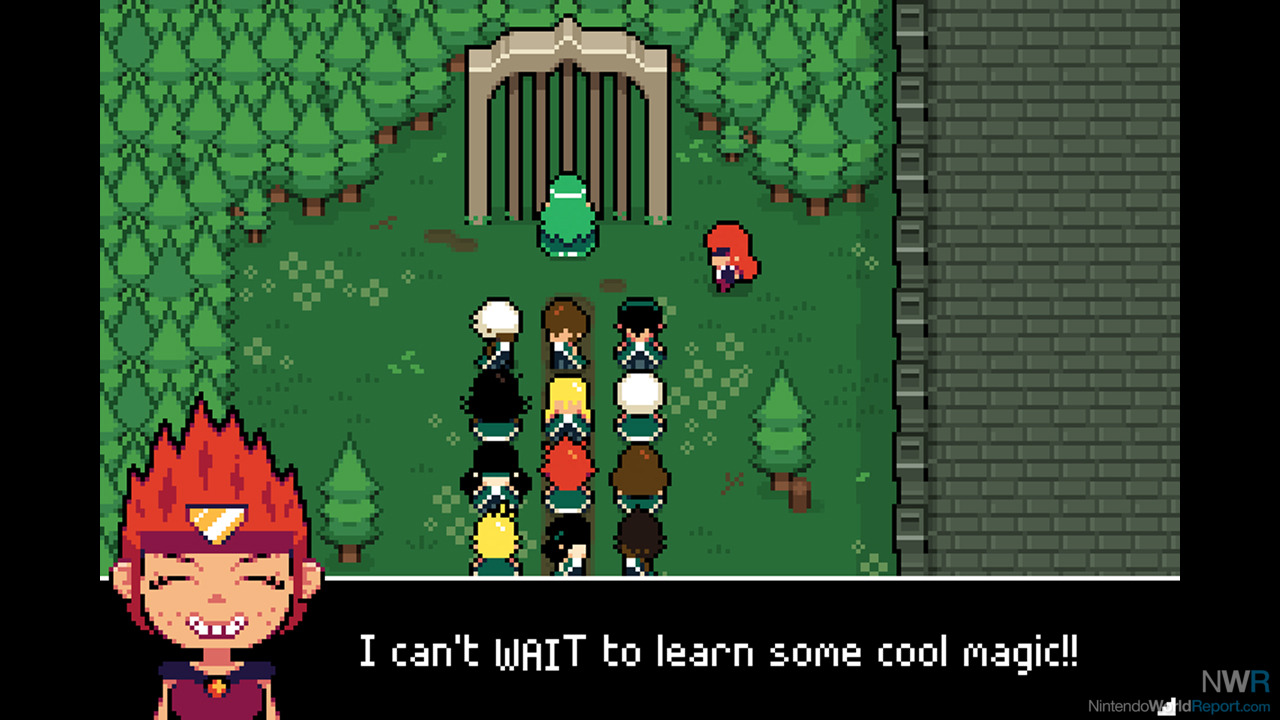 The story and characters in particular deserve top billing here. Friendships, hardships, and relationships all set sail for your heart strings, and by the end of the story it’s almost impossible not to feel emotional for the journey Maritte and her new friends have undertaken. Nearly every character has to come to terms with their own imperfections and identity, and the LGBTQ+ representation in Ikenfell is a wonderful breath of fresh air. The exposition and dialogue scenes can carry on a little long at times, but soon enough you’ll be back to exploring for treasures and hidden secrets and grinding out experience points and gold against a variety of lesser foes (“grinding” is the operative word in this case).

Enemies on the map can be engaged with through contact, which brings up a 12x3 grid on which battles take place. You can have up to three characters in battle from a total of six party members, and each one has access to a unique ability pool. When Maritte’s powers awaken at the beginning of the game, she is bestowed with fire magic and can deal damage and strengthen her allies’ attacks. The second character to join your party is Petronella, and she’s an alchemist who can inflict status conditions on foes and dispense healing potions. New abilities are learned throughout for a total of about eight, and there’s a fair amount of strategy given how diverse your party’s moves are in terms of effect and range. Other notable elements to the combat include a turn meter at the top of the screen, the ability to restart a battle after a party wipe, and the absence of magic points. While characters do have their own hit points that you have to carefully monitor, you don’t need to worry about running out of MP. 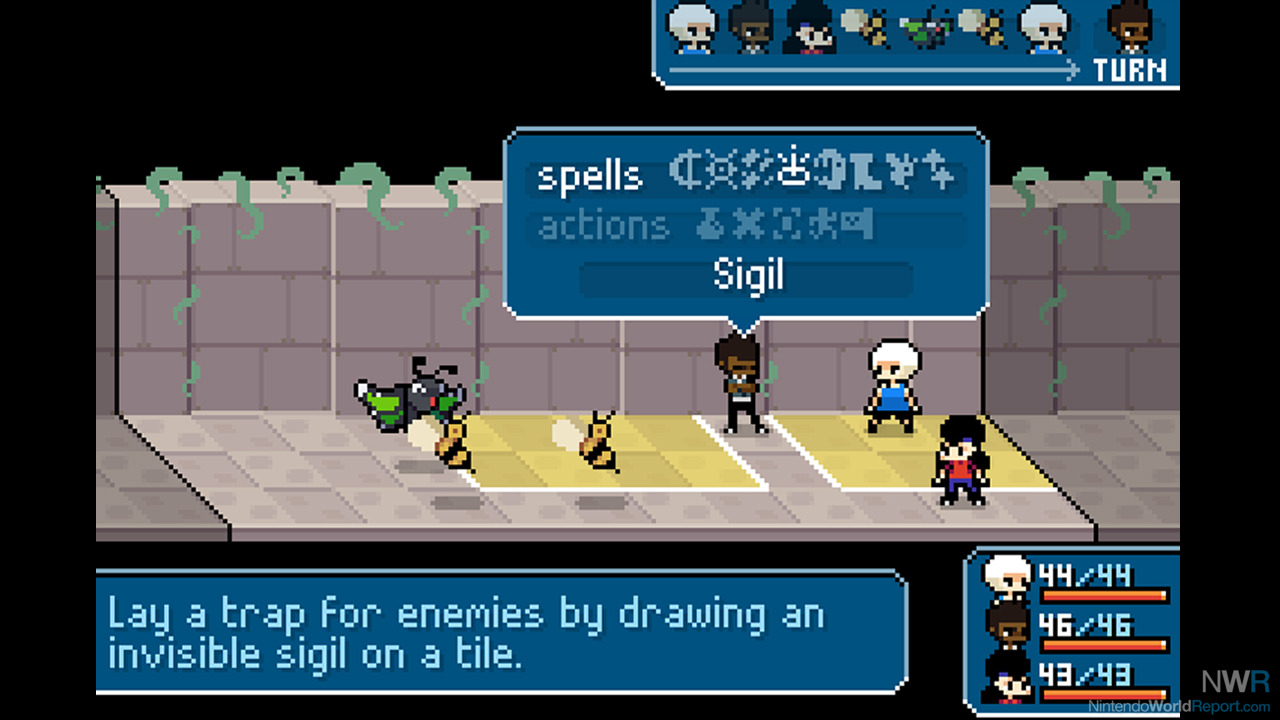 The most jarring aspect of the turn-based battles are just how steep their challenge becomes a few hours in. If you skip out on too many fights, your characters won’t have the stats and new spells needed to overcome the wide array of bosses that impede your progress through each chapter. More to the point, it’s the puzzling focus on the timing mechanics of the combat that make pulling a rabbit out of a hat seem child’s play. Cues in each attack and spell animation alert you to when you need to press the action button to amplify damage doled out or received, and the dozens of attacks, both yours and of your opponents, each have their own requirements for success. This makes every encounter with a new enemy feel fresh since you have to learn the timing for successfully defending against their moves. The major problem is that failure to time your button presses properly means you do almost no damage to enemies and receive two-to-three times more damage from them. For example, a boss might launch into the air and come crashing down on your party; a great timed-defense will only lead to taking five percent of your health in damage, a good timed-defense 10 percent, but a complete whiff can make you feel pain to the tune of 20-40 percent of your health. Now imagine that the boss has also summoned three minions to the fight or has a second form (usually the case). Ultimately, the penalty for messing up the timed button presses is so steep that it deters from the enjoyment of the battles.

The progression mechanics are fairly simple in that experience points lead to level ups and stat bumps. Curiously, the stat growth feels very slow early on and becomes much more pronounced after level 15 or so. A huge assortment of equipment can boost your health, strength, defense, speed, and even movement, and so you can make some more tanky and others more adept at offense. Gems can be exchanged for rare accessories, and shopkeepers are never too far away, offering restorative items, new gear, and potions that grant temporary buffs. Frankly, given how time-consuming combat can be, it would have been nice to see level ups provide a more substantial improvement to your characters. 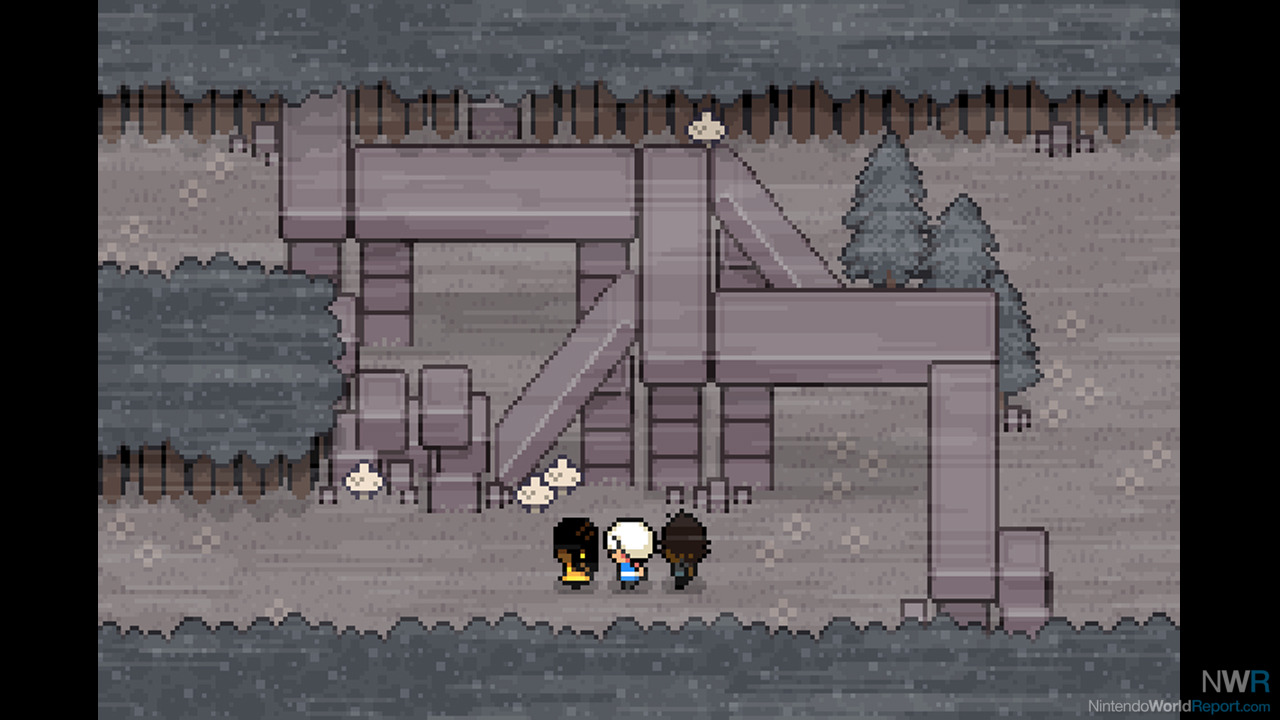 Even though there is a lot to like about the small world of Ikenfell, the combat is really hit or miss—literally. While the different abilities and the grid mechanic work well, the necessity of the timing mechanic for having any kind of success creates a net negative. Fortunately, there is an accessibility option that can be enabled that allows you to basically auto-win any combat scenario, so if you are more interested in the story or want to quickly do some grinding, it’s a nice feature to have. The real magic of Ikenfell lies inside the characters and their interactions with one another. The soundtrack, which features music from the composers of Steven Universe and Adriana Figueroa, is largely excellent and adds emotion and whimsy to complement the pixel art aesthetic. The dungeons also have some basic puzzle solving that adds good variety, and it’s nothing short of divine that you save the game, change party members, and heal up by talking to a random cat just lounging in place. If Super Mario RPG helped you become a master of timing-based moves, Ikenfell offers a warm and satisfying playthrough. Undoubtedly, though, some will find the non-combat elements overly simple and the battles too demanding.