A platformer that isn’t for the faint of heart, dood!

Before diving into Prinny 2: Dawn of Operation Panties Dood!, my only impressions of the game were that the main character was an adorable little blue penguin that shares the name of an alias of a game collecting friend of mine (@pureprinny) and that they often like to say “Dood.” Upon further research, Prinny 2 is a spinoff title of popular tactics role-playing game series Disgaea, which is developed by Nippon Ichi and published by NIS America. So for someone who has little to no experience with either, what should I be expecting? As it turns out, this ended up being one of the most frustrating and aggravating platformers I’ve ever played. But what exactly is underneath the hood of this game?

Prinny 2: Dawn of Operation Panties Dood! is a sequel to Prinny: Can I Really Be the Hero?. You play as one of a thousand different Prinnies that serve Etna, ruler of the underworld, who has come to discover that her panties have been stolen. Yes, it’s as strange as it sounds. You are playing as an army of pseudo-penguins who embark on a quest to search for a demon’s missing undergarments. It doesn’t get any more in depth than that. Having “panties” in the title should be enough of an indication that this is not a game for anyone looking for an innocent story. Although the audience for this game may be considered a mature one, it’s by no means overly offensive. The narrative serves up plentiful amounts of humor that really had me smiling and chuckling quite often throughout my play time, so it’s simply something to take into consideration when considering a purchase. 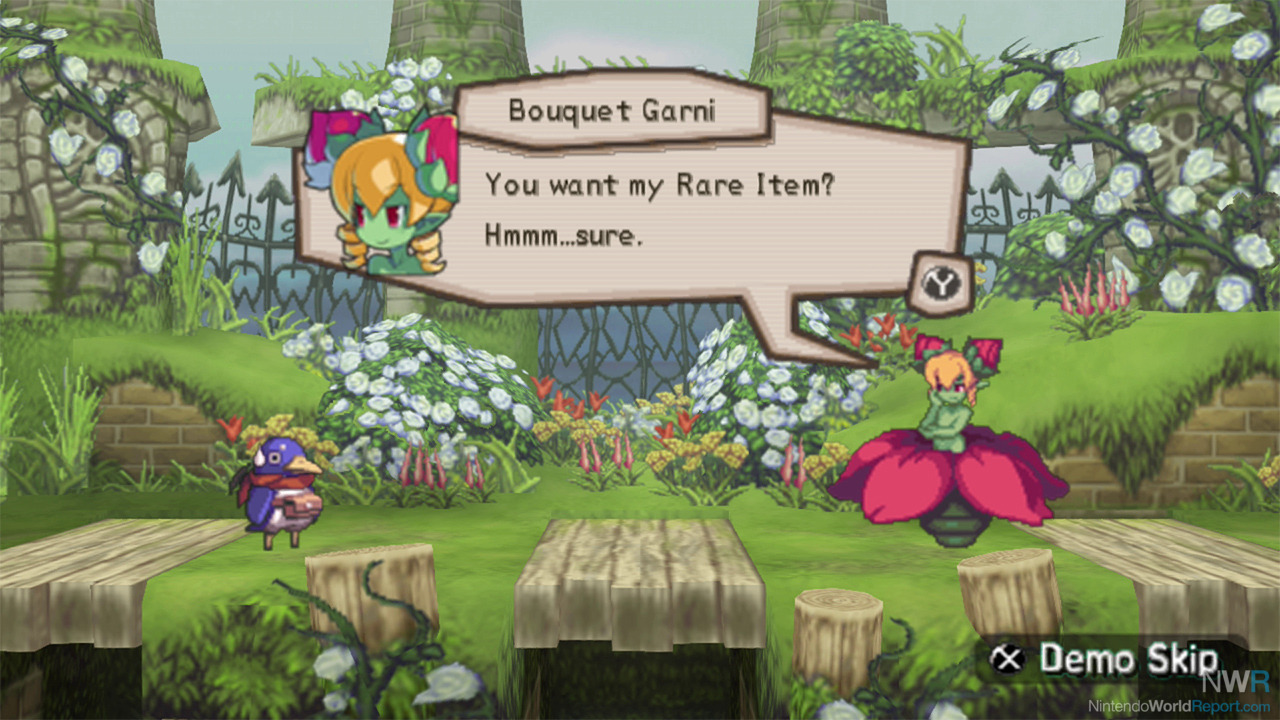 Unlike the Disgaea games, the Prinny duo are action-platformers. Your Prinny’s abilities are very simple and not hard to learn. You’re given knives that you can attack up front and personal with, or from mid-air, which allow you to shoot laser-like projectiles for a period of time before landing back on the ground. On that note, when you do this, the camera shifts from 2D to a 2.5D angle, which I found to be really dynamic and awesome to look at. You’re also able to dash, ground pound, duck down, and slide, though I personally found a few of these moves to almost be unnecessary. Prinny has no power ups or upgrades; the closest you’ll get is acquiring sweet treats dropped by enemies, which can help build up your combo meter. Once filled, your attacks become stronger than your base level attacks. If you eventually eat enough food, the Prinnies will then fart so large to the point that they’ll fly up into the air.

Let me be clear: this game will make you frustrated beyond what you’d typically expect of a platformer in 2020. What I mean by that specifically is that Prinny 2 heavily focuses on replicating classic game difficulty, reminiscent of games like Castlevania, Super Ghouls ‘n Ghosts, Mega Man, etc. One of the easiest examples to describe this difficulty is how you will time your jumps and movement, as precision on your timing and placement is everything in this game. You may find yourself leaping forward to jump across the ledge, but don’t expect to shift your trajectory backwards after you see you’re about to land on a missile or enemy. Each leap carries the risk of being a one way ticket to your death. Once you jump, you’re committed. It was something that took me a considerably long time to get used to, but found it to become a huge part of the level design presented throughout. Tons of risky challenges will put you in a position where you’ll have to find different patterns and strategies towards progressing through the level, similar to the likes of Mega Man. It’s something I can appreciate as a fan of the retro platformer era, but it’s hard not to feel it might be a tad bit over the line. 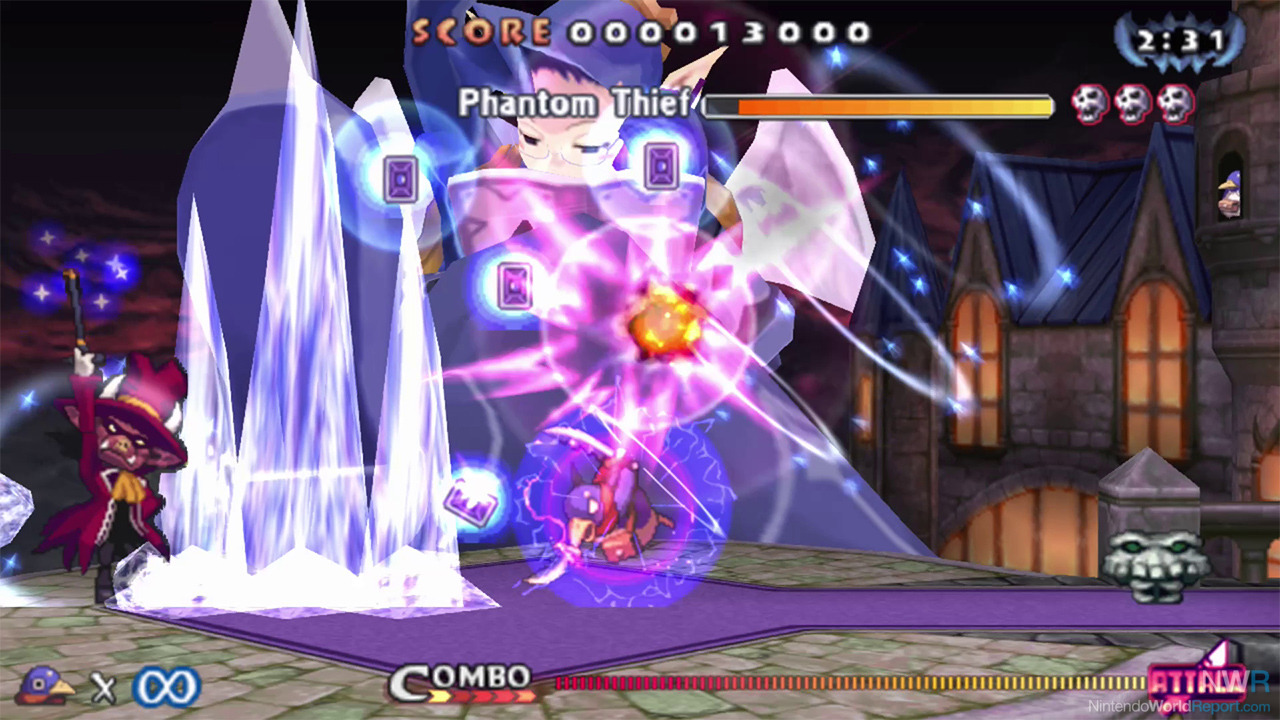 The visuals and score are spooky and eerie, but also sweet and charming. What we’re given is a very colorful and expressive 16-bit game, not much different from other games in this style. However, one element that stuck out to me the most was the transitioning camera between 2D and 2.5D as I had mentioned earlier. It’s a nice touch that I appreciate quite a bit, considering it isn’t attempted often in other games. It’s almost akin to the likes of Super Paper Mario’s folding back and forth between dimensions. From what I’ve seen at a quick glance, many of the sprites and animations are shared from the first game, with minor adjustments made, maintaining beautiful fluidity when traveling throughout the worlds you’ll play through. Many of the characters are based off of a very common anime style, which I find to be a bit oversaturated and uninspiring, but not a dealbreaker overall. The score jumps back and forth from fast-paced rhythm to more slow and spooky organ-like notes. Considering at the time of this review we are entering the spooky season, it was definitely fitting and I enjoyed it more than I normally would.

Once you manage to complete the main story of the game, be sure to give yourself a quick pat on the back, then jump right back in, as this game has a ton of replay value. Some of the unlockables include a boss rush mode, a couple extra playable characters, and a new campaign which features alterations in terms of bosses, levels, expanded story, and more. It’s an expansive spin-off that holds heavy amounts of challenge and humor, and gives players the chance to dive into the world of Disgaea for those who may not have had much or any first-hand experience with the franchise in its entirety.

If you’re looking for something humorous with high difficulty that’ll test your skill and quite likely push you even further beyond that, you’ll definitely find it in Prinny 2: Dawn of Operation Panties Dood!