An interesting premise that fails to leave a lasting impression.

Fantasy trappings go hand in hand with action games – Diablo and Magicka have long become the standard for the ‘click-em-ups’. Yet whilst fast paced action with the markers of wizards, elves, and the like are de rigueur in the gaming world, there are not many that describe themselves as a ‘twin stick shooter’. The Ambassador: Fractured Timelines does exactly that, although in its actual play, there is more of a puzzle element to it, both in dealing with the action of dispatching enemies, and in several of its core mechanics. Despite this intriguing, and unique fusion of elements, the game fails to leave a long-lasting impression, or to rise massively above a glut of other Indie action titles on the system.

The player controls Gregor, the titular Ambassador and new recruit into The Fellowship, a group with the ability to manipulate time. In classic quest manner, the Fellowship’s homestead is attacked and left asunder, and Gregor ventures on a quest to find out who, or what, launched the attack. It’s a fairly flimsy and simplistic tale without many exciting twists or turns. Along the way, Gregor can speak with a variety of NPCs who don’t really offer much beyond slight flavour text – slaves in the Druid mountain don’t do much beyond mourn their lot in life in a couple of sentences, for example. There are optional tomes to be found in levels that do somewhat flesh out the world, but this is not rich and deep lore. 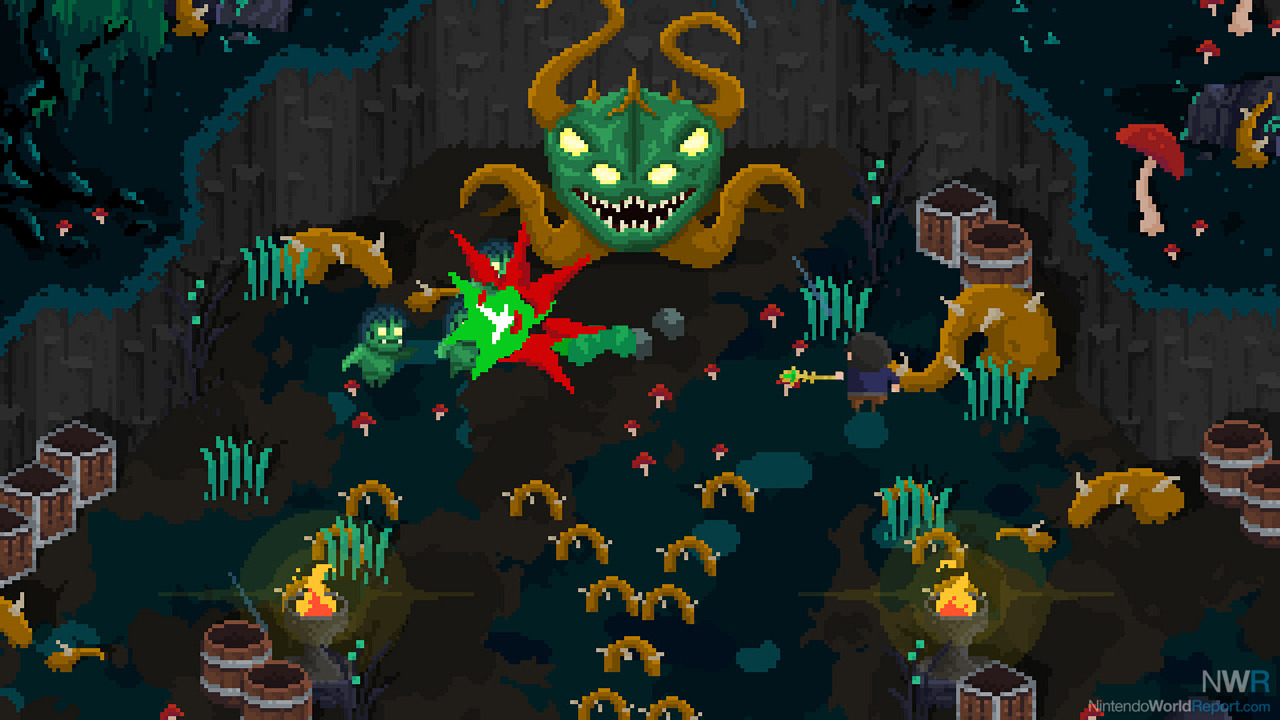 Those tomes feed into many of the puzzle elements and are often hidden behind areas requiring use of Gregor’s skillset. Gregor can be equipped with a primary weapon, wand variant, and set of armor. New variants are doled out fairly regularly on the completion of levels, and they offer fairly standard deviations. A heavier set of armor offers an extra heart of health at the cost of speed, whilst the opposing variant reduces Gregor to two hearts from the standard three, but with the benefit of a movement boost. In play, the game feels more akin to something like Hotline Miami or Superhot than a ‘traditional’ twin stick shooter. Each level features a selection of enemies who always start from the same place, and always in the same number and type. Gregor’s job is to clear the screen of enemies, opening the portal to the next area. Failure results in an instant respawn, and the room repopulated, so negotiating each level becomes about understanding enemy location and figuring out an optimum route through. The respawns are mercifully instantaneous which does somewhat alleviate the frustration when killed by the final stone monster upon clearing the rest of a level for the third or fourth time.

In addition to the base mechanics of combat, the game borrows a key mechanic from Breath of the Wild, namely the stasis effect in that title. One of the key skills of Ambassadors is the ability to slow down time in a circle around Gregor. Ostensibly this allows the player to manipulate themselves to a place of safety when enemy attacks are raining down on them, or a particularly speedy enemy approaches or teleports nearby; however, the secondary function allows Gregor to build up a series of hits on moveable objects on levels. Almost beat for beat, equipping the slowdown feature and hitting them repeatedly displays an expanding, Breath of the Wild-style arrow which can also be turned to face in specific directions before the time dilation mechanic ends, and the object flies ferociously towards an enemy or breakable piece of scenery. In practice it does play well within the title, but the similarities to Nintendo’s 2017 hit are somewhat jarring.

Health can mercifully be restored by eating two portions of food per heart. These can be found by destroying barrels or completely slaughtering helpless animals that roll around the level. These explode, much like the main enemies, with a satisfying comic explosion of blood. 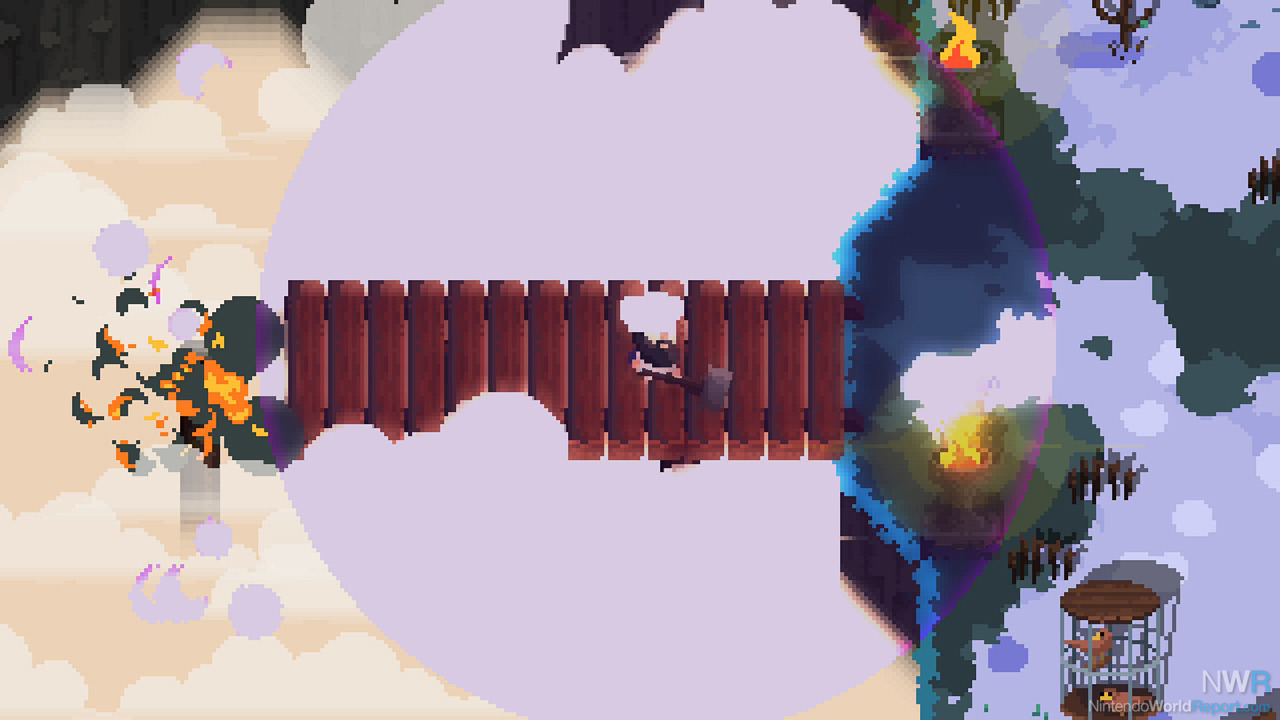 Much like the visual flourishes of blood, there are some interesting aesthetic choices in the game. Although the title utilises the now fairly standard pixel-art style, there is a definite variety in both the enemy type and environments, as well as the music that plays through each world. Druids are cast in shades of purple amid snowy white landscapes replete with an ethereal soundtrack, whilst shambling zombies and exploding creations akin to The Binding of Isaac lurk in the ruins of Tamaris and are scored to some much more up-tempo gothic tunes. It keeps the jumping between worlds interesting if at least the mechanics don’t change much.

A number of elements are intended to encourage replay after an initial run is complete: three difficulty settings run from one-hit-death to no reset of levels upon death, whilst an in-game achievement system based upon enemies killed and clear conditions such as not using any food per level are nice additions. A time attack mode seems brutal in the par conditions – I must confess I did not manage a single one, however I did not feel the incentive to revisit levels, particularly upon clearing them on a third or fourth attempt in the first instance. Upon clearing the game, a horde mode unlocks, but I must admit by that point I felt I had had my fill.

Some other gripes mar what is a generally fine game, and one that for the price is worth an afternoon’s play. The final boss, although true to classic arcade roots, demands that players repeat all of the previous bosses to be cleared before confronting them – failure at any stage on normal difficulty returns them to the start of the encounter, which can be frustrating. The game also supports rumble on Switch – however there is no nuance to this, and the same jarring and intense ‘bzzt’ that occurs when killing any enemy retains the same intensity (albeit a longer duration) when Gregor dies. I would strongly advise turning it off in the settings before beginning play.

To call The Ambassador: Fractured Timelines simply serviceable feels slightly unfair: the blend of mechanics from other games, along with a title that does at least offer more than a simple one-and-done run with hidden items, achievements, and no performance issues on Switch is commendable. However, it does little to particularly stand out beyond being a good enough game, lacking a unique selling point akin to Hotline Miami’s drug-fuelled sound and visual handling of similar gameplay. The title functions as a worthwhile enough ambassador itself to the development team’s skills, but not one that will linger in memory.