It's not always "Ys-sy" being a prequel, but this action-RPG does a fine job of it.

Ys Origin isn't the first prequel in a long running series, but it is distinct for being fairly different from the titles that came before and would come after. With three playable characters, a single setting, and staple protagonist Adol out of the spotlight, Origin offers a fresh experience for Ys fans and an enjoyable dungeon-crawler all around. The action-RPG combat is accessible, and the variety of boss encounters present a sturdy challenge. Still, can a game that takes place entirely within a multi-tiered tower keep boredom at bay?

The beginning of the game presents a choice between fledgling knight Yunica Tovah and mage Hugo Fact. A third character becomes available after you complete the game with each of the other two. Most of my time in Darm Tower was spent with Yunica and her melee focused axe and sword attacks. A number of cutscenes render the opening of Ys Origin a little subdued as you learn about the world and the two goddesses, Feena and Reah, who have gone missing. It's up to Yunica and Hugo, members of two different search parties, to locate the goddesses and figure out what they've been up to. Although the overall story provides enough incentive to keep climbing the tower, the dialogue between your character and others in the tower doesn't add all that much, at least during a single playthrough. It doesn't help that the entire game takes place within this albeit massive tower. 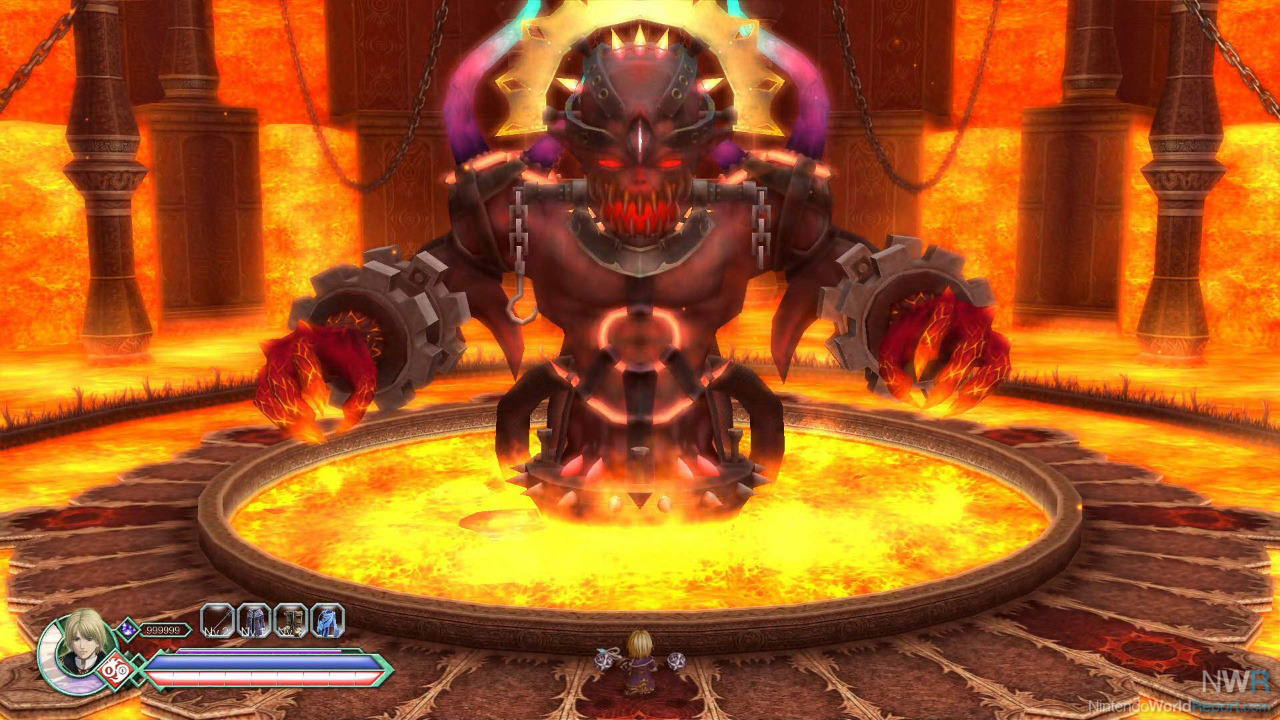 Thinking of Ys Origin as a hack-and-slash RPG is helpful, since so much of your time is spent mashing attack and spell buttons to crush scores of minions on each floor. Solid enemy variety means tactics that worked on earlier floors may not work later in the game, and so you will have to be more crafty with your movements rather than mindlessly swinging your weapon of choice. Yunica eventually gains access to a spinning wind attack, an electric smash attack, and a fiery wave attack, and each one can be upgraded by finding specific gems. These special attacks can also be charged for greater reach, more damage, and higher destructive power overall.

Ultimately, the combat feels really good, due in part to the sound effects produced and the loot that drops. Defeating enemies rewards you with experience and different types of orbs and items that grant points you can spend to unlock perks or strengthen your armor. Items restore your health and provide temporary buffs to damage and defense. By staying in combat, you can build up a meter that multiplies the experience you gain, so you are rewarded for keeping the action going, which also makes grinding less tedious. Seeing defeated foes explode in a pile of riches is always satisfying, but some of the drops can be hard to see, the skill point orbs in particular due to their small size. 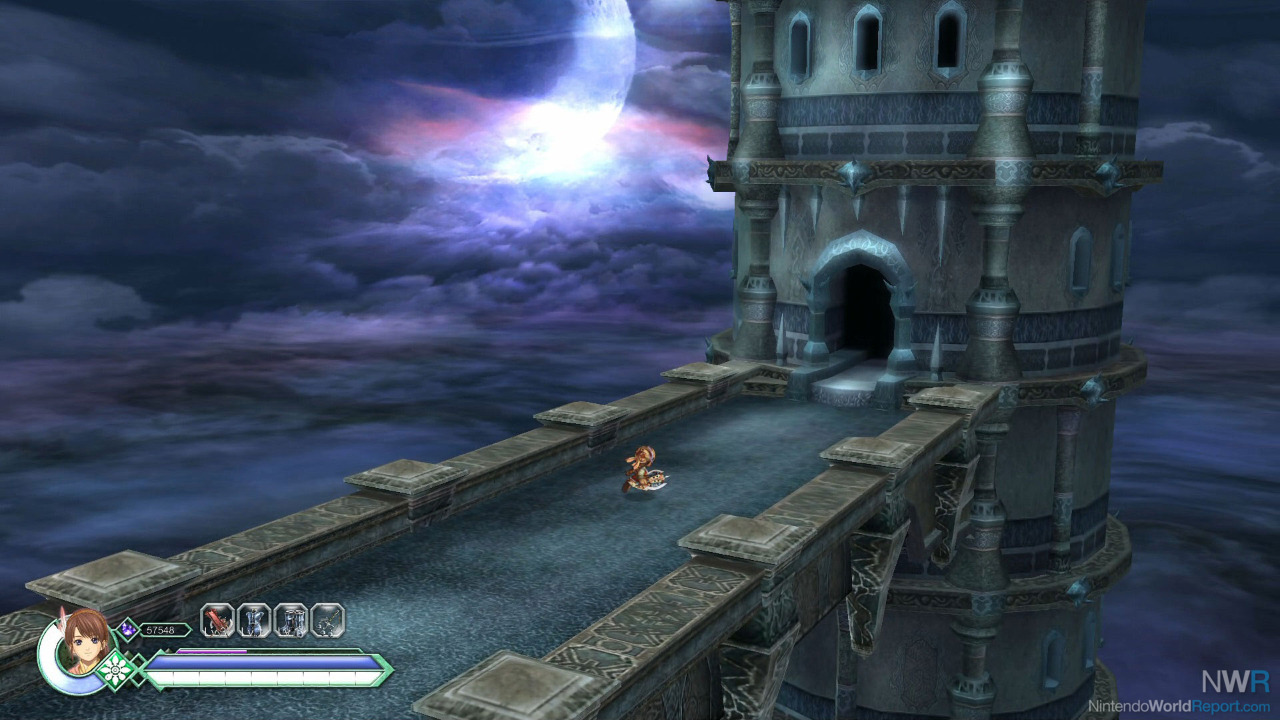 Boss fights crop up regularly every few floors and usually offer a reasonable challenge. If you avoid fighting too often, you may not be a high enough level to take them down, but it's just as crucial to explore thoroughly for treasures that provide new equipment and items that can strengthen your weapon and your three elemental abilities. That the floors themselves don't have any kind of map can make exploring later ones a little more of a chore; fortunately, quick fast travel between healing fountains means it's easy to move from floor to floor if you need to back track or progress the story.

Every few floors sees a slight change in scenery and theme. There's a section of watery floors that require you to equip an accessory allowing you to breathe underwater; the next section is filled with fire and lava; the one after that consists of movement-impeding sand and enemies that hide beneath. On occasion, a door will take you outside to a balcony that wraps around the tower, giving a glimpse of the world outside, almost teasing a place you cannot visit. On the plus side, the different floors are laid out in a variety of formats and use elevation that provides for some minor platforming, even more so after you earn the ability to double jump. 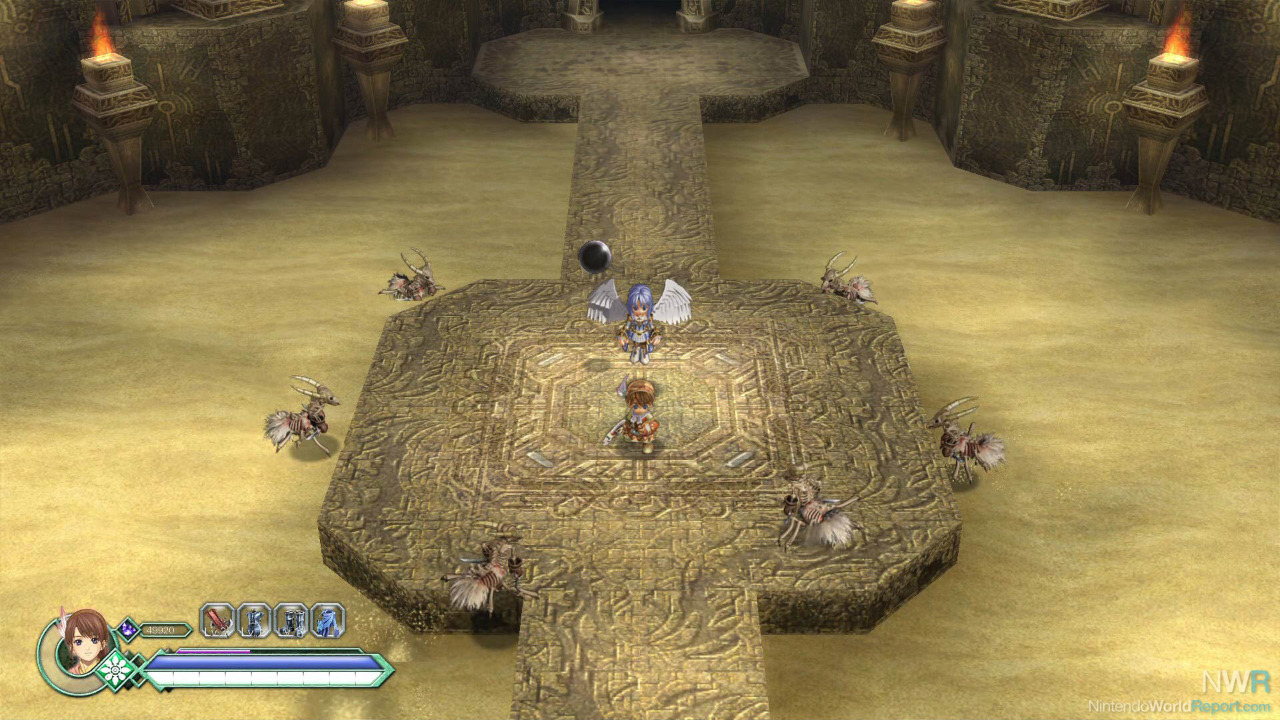 The sound effects and upbeat music will be easy to recognize for Ys fans, but they are a little more subtle than I would like for a game involving a single setting. The visuals are far from cutting edge, which is understandable given the title's original 2006 release date on Windows. The art reminds me a lot of the Trails in the Sky series on PSP. Overall, the look of Ys Origins isn't overly impressive but the performance holds up throughout, and playing in handheld especially does justice to the game’s visual style.

I found myself surprised by just how difficult it was to put this game down. It’s generally easy to figure out where to go and what to do next, the fast travel is very smooth, and the combat stays engaging throughout the playthrough. The progression mechanics are really pronounced in that if you are getting slaughtered or can’t seem to do much damage, it suggests that you need to upgrade your weapon, for example, and may have missed an opportunity to do so, which is remedied in Yunica’s route by finding a special ore. When I found myself dying to the same boss a few times, I would go out and grind a little bit to the next level or two, and that would often solve the problem. Other times, it’s just about determining the most effective strategy for each boss, but every one presented a fulfilling challenge.

It would seem that the primary (and lone) setting of Ys Origin isn’t the only aspect that emphasizes repetition. Unlockables are earned by completing the game with the two characters available, and then the third that becomes playable after that. Bonuses include a time attack, arena mode, new character forms, and more. Fortunately, there are unique story beats for each one, some new bosses as well, and they each play quite differently. While a single playthrough can take 6-10 hours, the additional content makes replays worthwhile, so Ys Origin is a fairly Ys-sy recommendation. The one-note setting aside, this is a great action-RPG to add to your Switch library.

Oh wow I didn't realize this game was out now.  Better buy it right away just to help insure more of the Y's games get ported to the Switch.

Oh wow I didn't realize this game was out now.  Better buy it right away just to help insure more of the Y's games get ported to the Switch.