Over the Alps (Switch) Review

Does this sleuth's alpine adventure steal the show or would it be better left unnoticed?

Our story begins as a couple ventures into their recently moved in home and discovers a dusty wine cellar, seemingly untouched for years, for one last bottle to cap the day. Among the clutter, they find a series of correspondence from late 1930's Switzerland. A time of war, espionage, and possibly a little romance if you read your cards right. Over the Alps by Stave Studios is a choose your own adventure style game that has you play the role of a British agent dropped into Switzerland as the world stage is set for the brink of the Second World War.

The primary gameplay has you selecting responses that represent a choice often based on a moral alignment. Do you want to be an aggressive, take-no-prisoners agent? Or would you prefer to be the charming type? These are some of the options the game provides for you to shape the narrative. In addition to this, the game provides feedback such as a character’s disposition towards the protagonist alongside revealing further character traits of your own. This helps you make informed decisions as you carve your spy's path in Over the Alps. 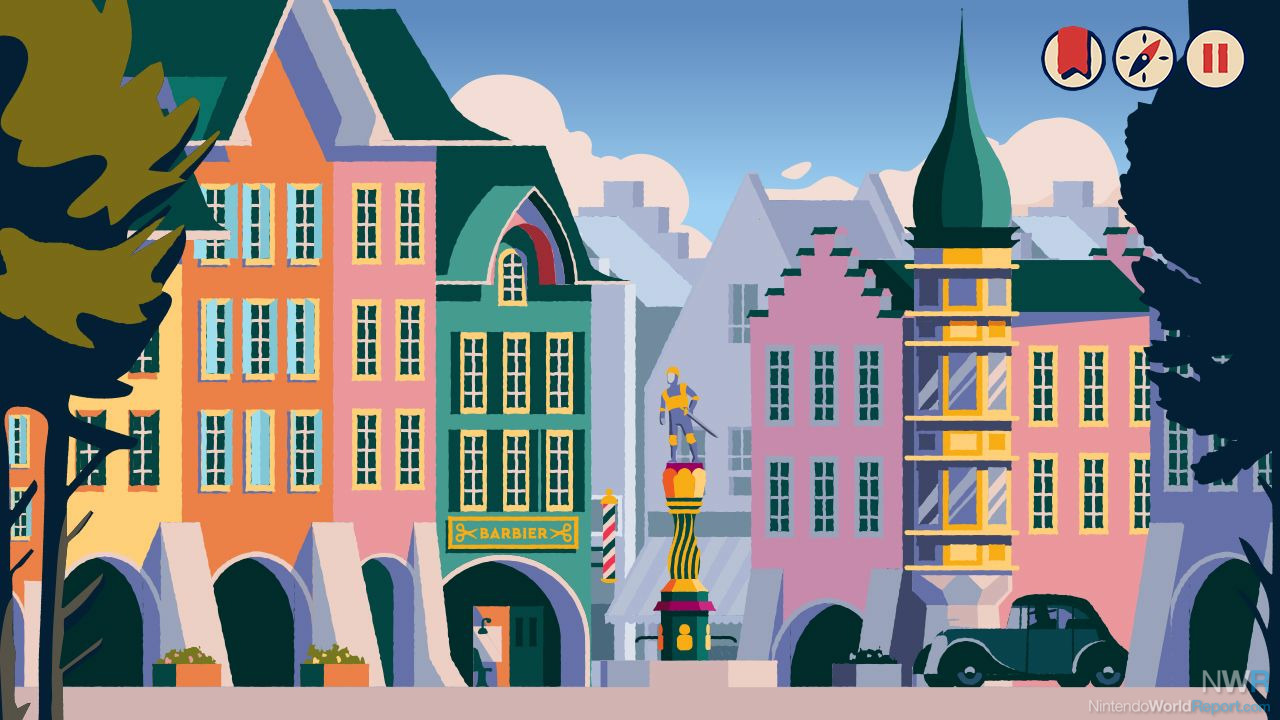 As a British agent, Control (your boss) expects the best of you. But even the best can run into a bad string of luck, and eventually you'll be face-to-face with the local police. This is where the game introduces its next mechanic. As you transition from town to town, you're presented with an aerial view of a map, sometimes with branching paths for you to choose. When you do, you'll be given a report on the status of the local police hot on your tail. These reports tally the number of "footprints" and "diversions" you accrued in the area. The former are clues you left behind by making a poor or necessary choice. The latter represent roadblocks or red herrings you may have left for your pursuers. Leave too many footprints and not enough diversions and you’ll be apprehended.

On paper (or poskart) this seems to be an interesting system; however, the police don't actually pose any sort of real threat as they’re easily avoidable unless plot driven and the tools at your disposal to make this mechanic interesting are rarely available. When you inevitably are apprehended, you simply divulge your latest findings to a shadowy figure smoking a lit cigarette. With a quick slap on your wrists from Control, you're on the road again to further the plot. 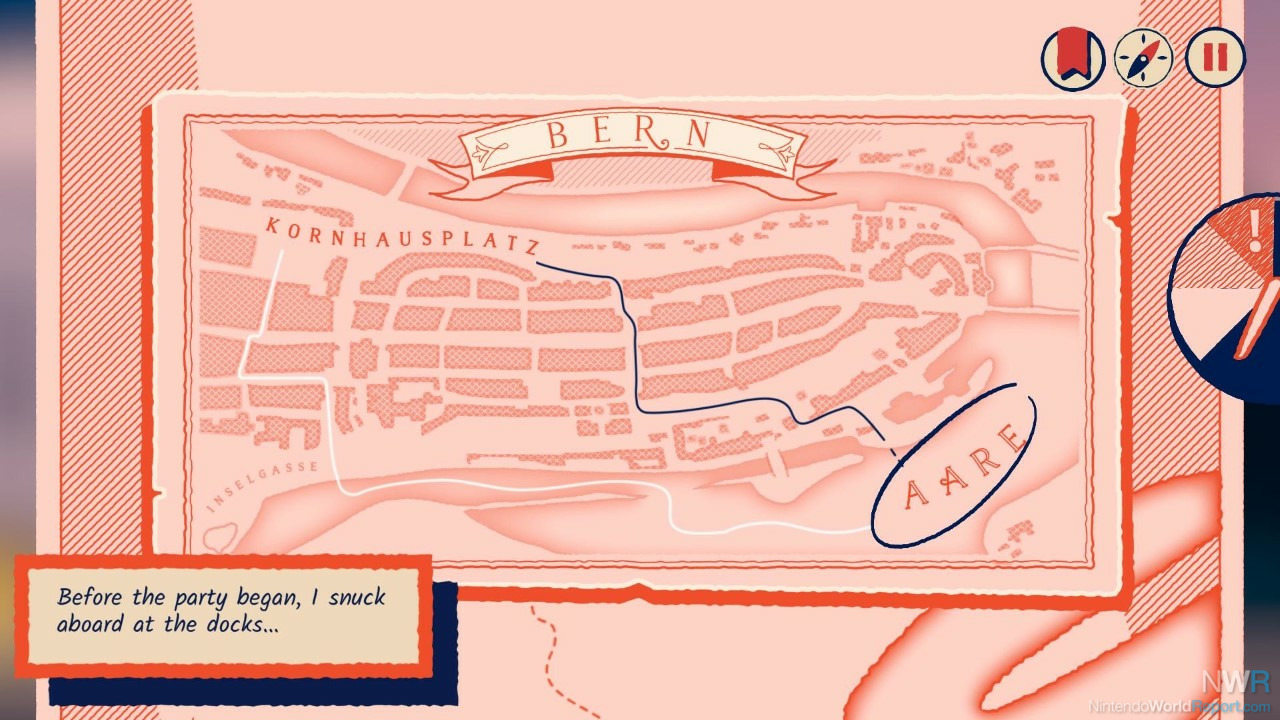 Where Over the Alps shines is in its art direction. Each locale has the appearance of a gorgeous 1930's postcard or travel poster, with some images so picturesque they would make Wes Anderson smirk with envy. Unfortunately, some of these areas emphasize style over substance. Any visited location typically offers no more than one point of interest to explore. And poking around in these lush images offers no reward or secret to discover. I wish there was an incentive to explore these images longer; instead, they're quickly lost and forgotten as you lead to the next point of the narrative.

Where the audio is concerned, it's often downplayed and subtle. Within a bierhaus, you'll hear the roars of a rowdy crowd and on the snowy peaks of the mountaintops, you'll nearly feel the blowing winds. These all do well to lend a nice sense of atmosphere to each location, and not having blaring background themes while you read through the story is welcome. This isn't always the case as some towns have plucky tunes that set the stage for excitement and adventure, though unfortunately none are too memorable. 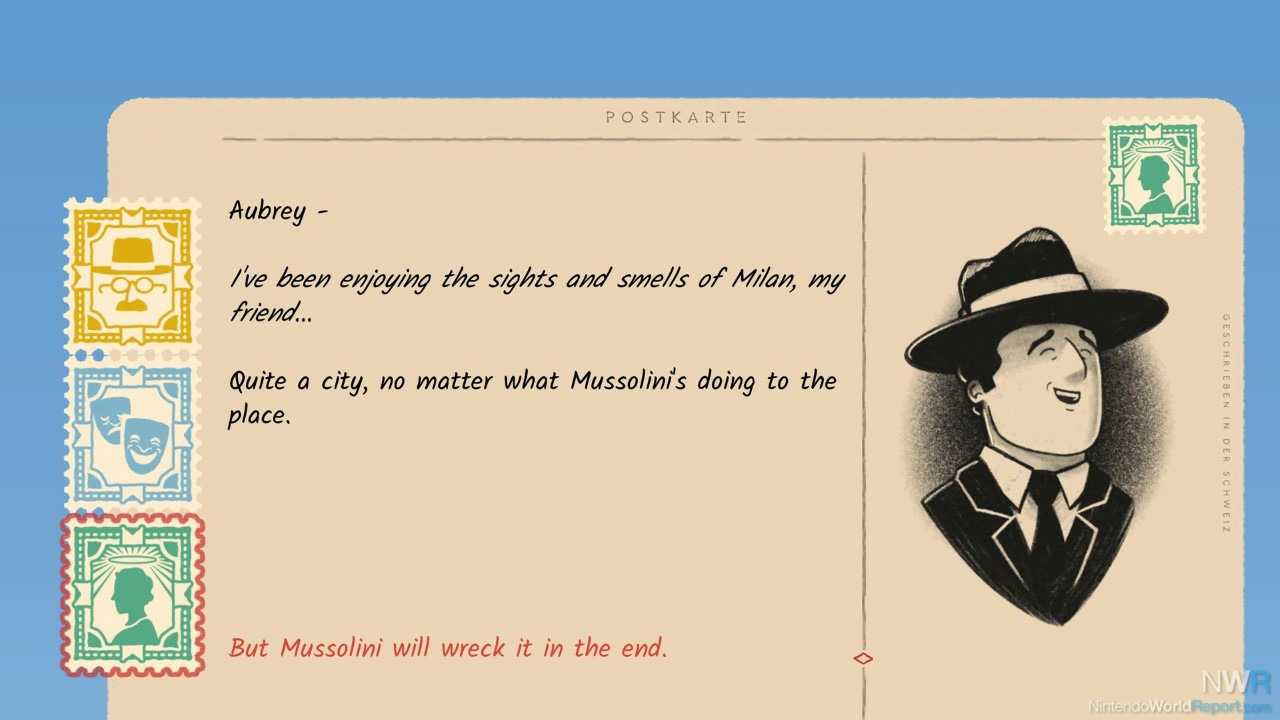 As Over the Alps is a narrative-driven game, the linchpin to the entire experience is the story, and it never quite raises above mediocrity. While some moments were engaging, the overall story isn’t as complex as it could be given the setting. One of the two available tales, A Chase of The Chateau Vercoli, was a story of cat-and-mouse trying to secure technological plans for the British and keeping them out of German hands, all while ensuring the safety of a VIP with the intel. While an interesting premise, the story often felt held back. Too few characters and clichéd plot points didn’t allow for an intriguing narrative. While a simple story can still be entertaining, my issue lied in the fact that as I mentioned earlier: just like the police pursuing you, my choices often felt inconsequential as the narrative maintained the intended plot, undermining the gameplay. Multiple playthroughs could highlight further options, but on a repeat playthrough that I never completed, my varied choices kept me on too similar a path to change my opinion. So long as you know that Over the Alps doesn’t allow the amount of control you might wish out this style of storytelling and that you’re not getting the complexity of something like Game of Thrones, there is some enjoyment to be had.

As far as mobile titles ported to the Switch, this is one of the more enjoyable experiences, but that's not a saving grace for our weary traveler. The port itself could have been made a better fit on Nintendo's hybrid console. Inaccurate save states often bring you to the beginning of each location's narrative. The controls left much to be desired: using the switch's touch screen is easily the preferred method since the D-pad is cumbersome, to say the least. The port runs smoothly, although nothing taxing is being displayed on the device, and still I experienced one complete lock up when starting the second story.

If you're interested in a lighthearted adventure you will find something to enjoy in Over the Alps. During my review, I often opened Google Maps as I trudged through the territory, snapping screenshots of each location along the way. Even though with the two stories currently available offering roughly 4-6 hours of combined gameplay and one more story on its way (currently without a release date) as a free update, there’s still better value to be found on the eShop. You could easily breeze through this game if you're a quick reader. And with so much to play these days on Switch, I'll be hard pressed to return.