Blood-sucking turn-based strategy at its darkest.

In my youth, I played a fair bit of Heroes of Might and Magic (HoMM) 2 and 3 on PC, and many of my friends and even family members enjoyed the game as well. Turn-based strategy is a genre that seems built for PC, but the handheld nature of the Switch makes a strong case for porting such titles to Nintendo’s console. Although Immortal Realms: Vampire Wars contains many of the elements that kept me so enthralled by HoMM, the Switch version does leave a few things to be desired. That said, it still offers dozens of hours of content and a surprising amount of depth.

Across three campaigns with four acts in each, you control various vampire lords from three different factions: the Dracul, Nosfernus, and Moroia. Each campaign tells its own story, and because every act involves multiple battles and objectives, there’s a decent amount of flesh on the bones here. The world of Nemire also features four different biomes that add effective visual variety. To reach the next campaign, you need to complete the one prior, and so you begin with the Dracul, who are ruled by Vlad and Cecilia. The couple work to quell an impending insurrection in their kingdom, and dire consequences await those responsible. Overall, the story beats add to the enjoyment of the game, despite their simplicity. 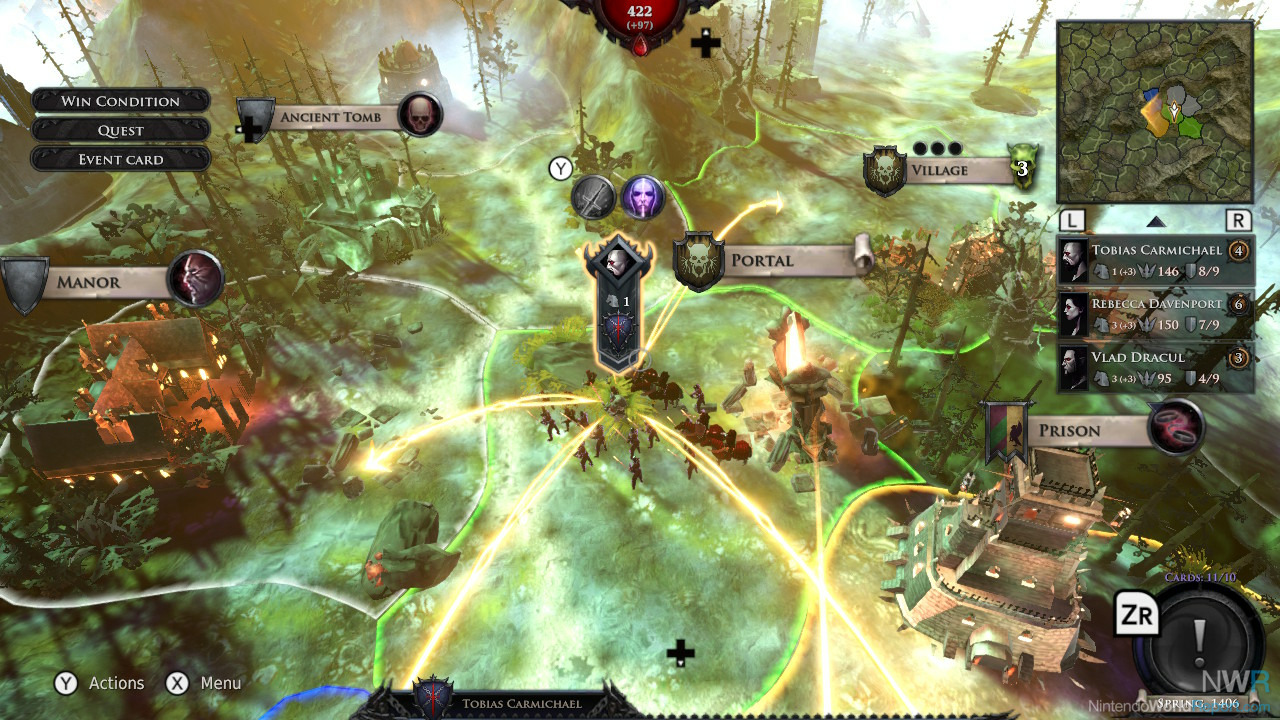 Gameplay is primarily divided into two portions. During “Kingdom” mode, you take turns spending action points to move your lord and their army across the different territories of the particular map you’re on. You can recruit different troops from villages, caves, and fortresses to add to your army. There are also blacksmiths where you can buy equipment for your lord and libraries where you can purchase new cards to use. Each faction has their own cards to use both inside and outside of battle. Before getting into combat, cards can be played using blood points, which are displayed at the top of the screen and also used to sustain your army, buy new cards, and purchase equipment. Some of the card effects include healing your army, increasing the number of actions you can do in a given turn, and even ranking up your army to make them more potent. Another action you can do is to claim areas on the map, which grants experience points to improve your lord and clan, but also to give you control of different facilities and cities.

The second portion of the gameplay is “Combat” mode, which plays out on a squared grid and sees you exchange moves with your opponent until one army is wiped out. This is the decidedly weaker area of the game, but mostly due to UI and presentation issues. The default view is faint and murky, with movement and attack ranges very hard to see, particularly in portable mode. Even though there are options for different colors, it’s still difficult to clearly see which unit is acting and what exactly they can do. While health meters are easier to make out, the numbers displayed above each unit are impossible to see without zooming in. Each lord has their own spell cards that can be played using mana points, and these can help turn the tide in your favour, but the way the text is displayed on them is unhelpful as you have to wait for the description of the card to scroll automatically. 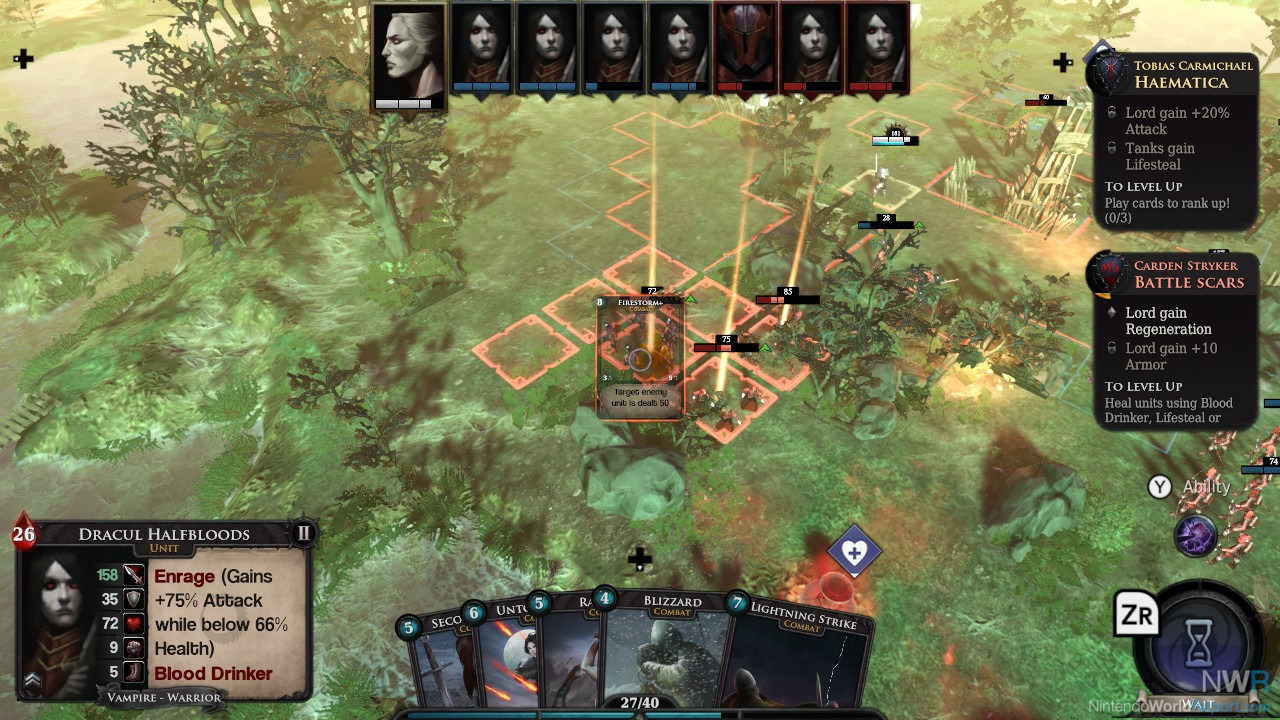 What’s worse is that the maps where battles take place are frustrating to navigate and really not much fun to fight on. Their small size and various obstacles on them mean your units will constantly be bottle-necking, forcing you to take roundabout ways to engage your opposition. It can also be difficult to decipher what an enemy lord is doing with their own spells and abilities. In the initial set up where you can make slight changes to your army’s starting position, I wasn’t even able to highlight certain units given their position on the edge of the map. Bonuses can occasionally be earned from defeating enemies, and these can empower your lord and other unit types. Nonetheless, when my army moved into an enemy-occupied territory and I had the option to do so, I would always select the auto combat option to resolve the battle instantly, unless the game told me I was facing certain defeat.

The controls are adapted fairly well for the console experience, and I didn’t really find myself missing a mouse all that often. A reticle in the center of the screen can be moved around and activated to select units inside and out of combat. Accessing different menus uses the D-pad and shoulder buttons, and it did take a little getting used to. The sheer number of options you have in Kingdom mode mean you are doing a lot of prep work in between battles, but after a while, taking care of level ups, recruiting, and playing cards all became quite smooth. 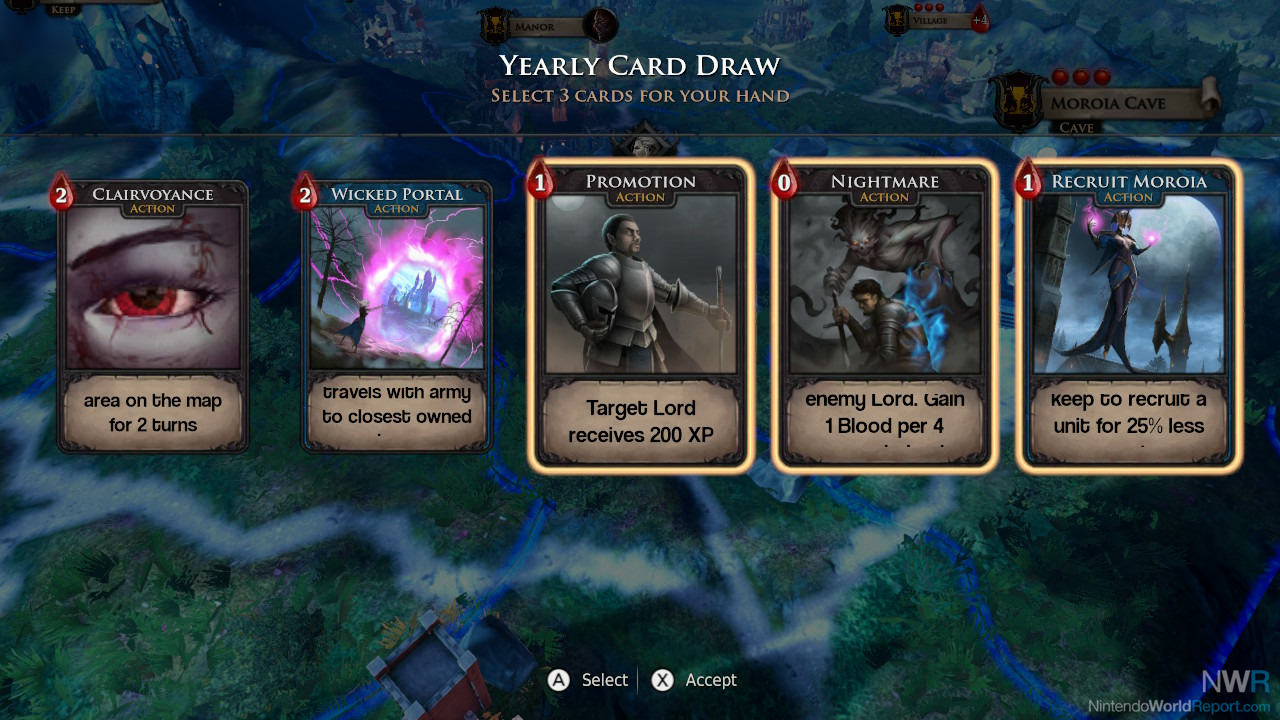 There’s a depth to Immortal Realms: Vampire Wars that necessitates completion of the tutorial. Each scenario will have its own objectives, rules, and map layout, and the difficulty ramps up significantly after the first act of the Dracul campaign. Even connoisseurs of turn-based strategy games will find their skill tested with this one; you can’t always wait around collecting resources or powerful cards since the enemy will eventually come looking for you. A detailed skill tree is associated with each clan; however, only some of your progress in it will carry forward from act to act. One noticeable issue with the game is lengthy load times before entering and exiting combat and when loading a scenario; these can take upward of 30 seconds. If you’re thirsty for a bloody, in-depth strategy title, Immortal Realms: Vampire Wars may just slake your thirst. That’s if the combat segments don’t put a stake through your heart first.