Why would I want to change that perfect view? What would I change it to?

I was not very familiar with the work of Avicii before playing AVICII Invector for the first time back in March, but after a significant amount of time with it now I know that I knew way more of his music than I thought. AVICII Invector is a rhythm game developed by Hello There Games and published by Wired Productions that brings a setlist of the late DJ’s best tracks into the world of rhythm games, placing the player in the cockpit of a spaceship that doesn’t really seem to care what its destination is. From the outside the game is oozing with style, but the real question with any rhythm game is how exactly does it feel to play, and does the music make as much of an impact as everything else? 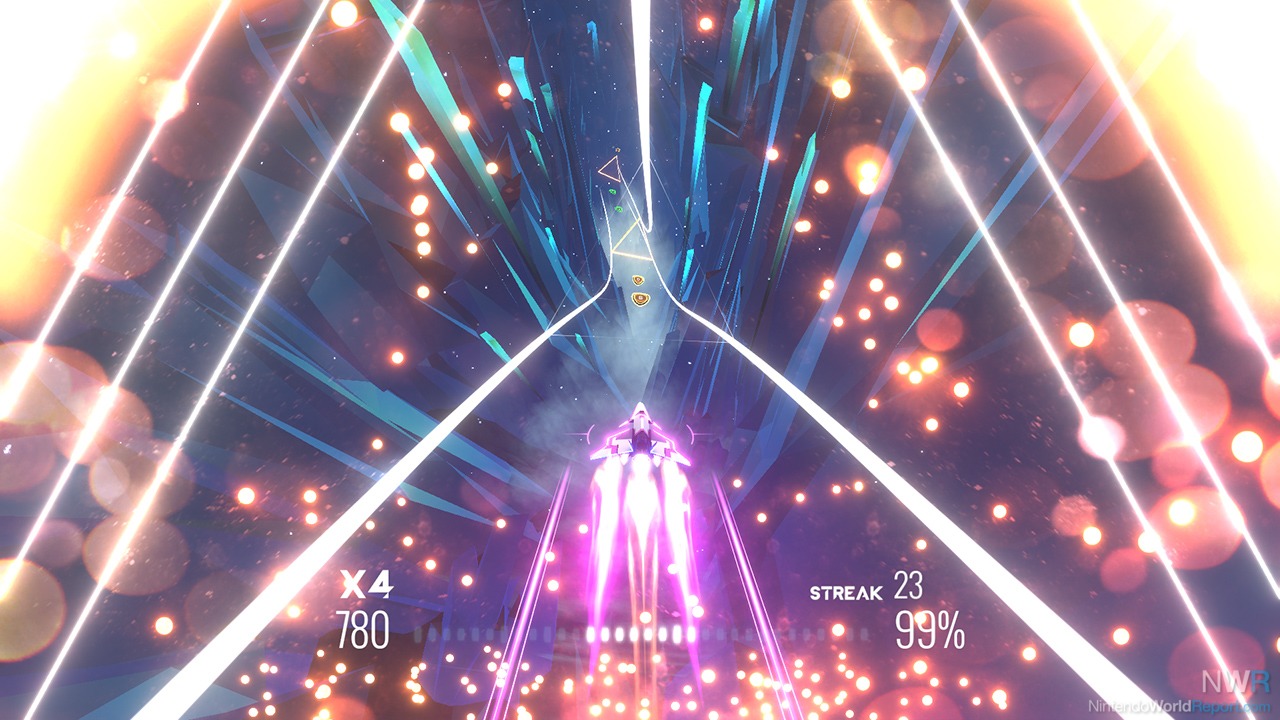 Gameplay in AVICII Invector is split into three different phases. The first finds the player’s ship flying through a triangular tunnel that they can rotate as they fly using the left analog stick. The second puts them on a series of disconnected tracks and gives them the ability to move left and right between different lanes. Both of these phases play very similarly in terms of button inputs, of which there are two types: glowing bars that signal the player to press L when you cross them, usually set to the song’s kick drum, and arrow icons that signal the player to press one of the face buttons when you reach them. What face buttons are required depends on the difficulty the song is being played on, with easy requiring B and Y, medium adding A into the mix, and hard completing the set with X. The third phase is the easiest, with the ship taking off from its track into a free flying mode where the player must navigate through rings that appear before them. This phase is usually during a quieter part of a song, giving the player a decent amount of time to take a breath before it ramps up again.

All three phases are incredibly fun in their own way, with the hard bass hits reverberating through every aspect of play and the entire game feeling incredibly responsive from minute one. The game’s difficulty balance is also very well done, with easy being approachable but not boring and hard being a massive challenge that should give even the most seasoned rhythm fan a run for their money. This balance is something I’ve noticed a lot of rhythm games tend to have a problem successfully managing, but AVICII Invector has nailed it. If I had to give it one small criticism overall it would be that on harder difficulties it has the potential to become a sensory overload to some players, but those same players will likely do just fine on easy or medium. Icons are always very clear to see, never blending into the game’s neon particles and moving backgrounds. It also makes an effort to help struggling players if they get thrown off by a mistake, with labels appearing to remind them what button they should be hitting once they’ve missed an input of that type, and going away once they seem to have gotten back on track.

There’s really not much more to say about AVICII Invector, being a rhythm game means there’s really not a lot to cover. The game feels good to play, has good difficulty balance, and the music is fantastic, that really covers most of what you need to know. There are a total of 35 tracks to be found in the game, with 10 of them being brand new for the Switch release. The neon graphics and landscapes you fly around are beautiful if you have time to look at them, and the short cutscenes that make up the game’s scant story manage to tell a heartwarming tale despite lasting maybe ten minutes in total. I may not have been very familiar with the work of Avicii before playing this game, but I think I can honestly call myself a fan now. If you like his music or just like rhythm games in general AVICII Invector is a game you absolutely should check out on the Switch.