It's a better science lesson than game.

Have you ever played the tabletop game “Evolution?” It’s a compelling, if overcomplicated, lesson in evolutionary theory through the discovery and retention of genetic mutations that confer advantages and disadvantages on the player’s population of animals. Niche: A Genetics Survival Game, is a 2016 indie Kickstarter with a surprisingly enthusiastic Steam community that has now landed on the Switch. I figured this was a good time to pull out the Review FAQ format so that I can explain the lessons it’s trying to teach.

Had to happen eventually.

So tell me about Niche: A Genetics Survival Game.

It’s a population genetics sim by Stray Fawn Studios that aims to teach players about population genetics through what’s basically a virtual board game. The devs cite Creatures, Spore, and Don’t Starve as inspirations. While I can definitely see aspects of all of those here, I think it bears a closer resemblance to North Star Games’ “Evolution” tabletop game.

I haven’t played that.

It’s a game where each player has a population of animals in a given environment, competing for resources. Your animals draw “mutations” from a deck of cards, and those mutations can help your animals get food or avoid predators. It gets very complicated very quickly, and there are a few expansions. I played it with the old NWR Newscast crew at PAX South, it was fun but became overwhelming quickly.

Well, your mileage may vary. The point is that Niche does similar things, and I think does them better, but also isn’t much fun to play. It’s a sim/survival game where you’re not just maintaining a population of animals, you’re ensuring their survival in a variety of environments. You start the game’s Story mode with a single cat-like animal and, over the course of several turns, learn how to move, eat, mate, and incorporate mutations into your genes. You’ll have to forage for various kinds of food—all of which require certain traits—and defend against illness and predators. Each map is structured like a giant game board with individual hexagonal spaces, and your animals and everything you interact with are “pieces” that are moved around this board.

Your goal is to maintain a stable population of animals and eventually return to your original island (the original cat creature is dropped on a new island by a bird). This will inevitably lead to a “Planet of the Apes” style ending where your animals will look nothing like the animals they descended from, which is kind of cool. Throughout your journey, you’ll learn about science!

Explain it, as you would a child. 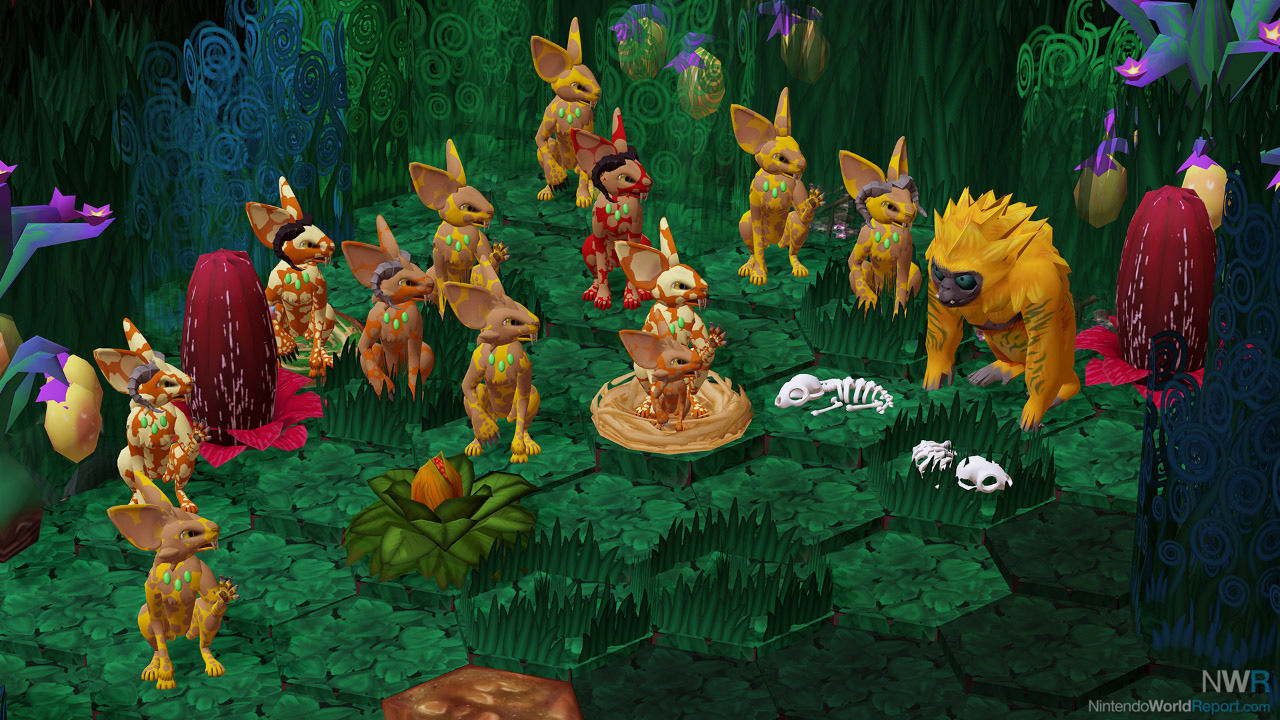 Each animal in your group has heritable traits, like “nimble fingers” or “short snout.” Each trait confers certain advantages in the environment. Animals with nimble fingers, for example, can pick more berries. Animals with shorter snouts can smell things in a wider range than other animals. You can give each animal two mutations (or one mutation twice) that may be passed to their offspring. The chances of passing those mutations along are greater if that animal’s mate also has that mutation. When you add new animals to your population, they may bring along new traits or mutations for your gene pool.

Indeed it is. At the most basic level, evolution is just a change in a gene’s frequency over time within a population. Because animal populations are set (by predators, environmental factors, etc.), passing mutations through that population’s descendants is just a statistical inevitability, especially if some outside factor confers a big advantage on specific mutations. For example, sea ice is becoming increasingly scarce due to climate change, so animals that rely on that sea ice to hunt (polar bears) or rest (walruses) will have a tougher time surviving.

How does Niche portray that?

Your group will eventually need to move to new islands (it’s not required, but the game becomes incredibly dull if you just maintain a stable population on one island forever), and each island has its own challenges. Food sources that were plentiful on one island—like berries—might be hard to find on others, and your pack will need to exploit new resources, like clams or termite nests. You also have to avoid—as much as possible—inbreeding. You do this by recruiting new “tribe” members and ensuring that breeding pairs don’t have the same immunity genes.

So what happens when you get to an island with different resources? Does everyone just die?

Each individual animal has a set lifespan, and during that lifespan, they can breed. Since you can choose two mutations per animal, you can in some way direct the evolution of the descendants, which is how you adapt to a new environment—just like real evolutionary change. Of course, in real life, if local conditions change faster than the fauna or flora can breed, you get extinction events. If all your animals die in Niche, you’re kicked back to the beginning and you have to start again.

So it’s a roguelike?

Sort of. You can choose to keep all the mutations you’ve unlocked for your next run.

Well, how’s the gameplay? Is it all menus?

Pretty much. There’s not even any animation.

The board game analogy is tragically accurate: you choose an animal, then either select another space to move it to (where it does, statically) or you choose from two or three available options in an adjacent space, like clearing grass, digging, or simply moving there. The most exciting thing that happens is that activating your group’s senses turns everything grey except the things that are “visible” to their senses of smell or hearing. When non-player animals in the environment move, they slide from space to space like…pieces on a board game.

Oh…kay. How does it look? 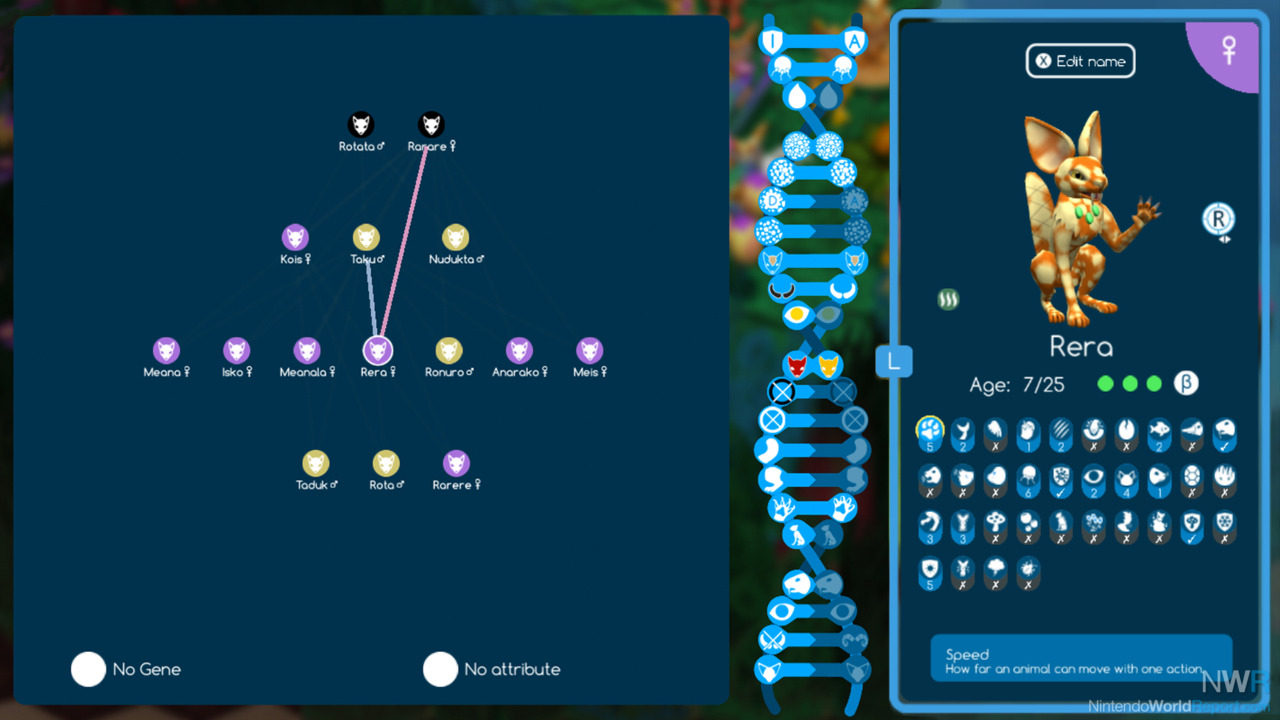 Frankly, it looks bad. Most of the animals look like generic mammals but different mutations give them a variety of features, like quills or long toes or different colored coats. Males and females are differentiated based on who has a mane, but that’s not always super clear. Luckily, you can identify which sex is which when you “click on” a given animal. Some of the animals you’ll come across are mind-flaying nightmare monsters who can somehow still breed with your animals. But even if you’re charmed by the variety of different “morphs” of animals (I kind of am), I find the whole game looks incredibly generic, and at times downright uninteresting. The game also doesn’t really tell you how to play beyond “here’s how to eat, breed, and choose mutations.” I had to go to the game’s Steam community to learn how to do basic things. By the way, the game’s Steam community is very informative, with lots of excellent guides.

However, it’s very apparent that to get the most out of the game, you have to spend a LOT of time with it, and if the core gameplay loop doesn’t click with you after many hours, it’s not going to get more fun. It might get more interesting, but it never really got more fun for me.

Did you feel like you had to rely on the Steam guides to be successful?

That is a resounding yes.

And although it’s charming that the character models can change so radically based on an individual animal’s unique set of traits, it’s also very clear that animals are made of “pieces,” a bit like Spore, that takes a lot of the naturalism out of the experience. It’s also strange to me that so many animals you find on islands can breed with your animals. In the wild, the biological species concept is largely not a rule (individual species cross-breed all the damn time) but you wouldn’t expect to see a squirrel mate with a housecat and have fertile offspring. But in Niche, you can basically cross-breed animals from radically different taxonomic classes and be okay!

The important thing, to me, is that it gets population genetics, genetic drift, mutation, and environmental stresses on adaptation rates down pretty accurately.

But it’s not fun to play.

Important caveat: I, personally, did not find it enjoyable. There are a boatload of Steam users who think it’s the bee’s knees. If you’re big on sim or survival games, this might suit your fancy. Just don’t expect a lot of sizzle on this steak, aesthetically speaking. There’s a lot of micromanagement here. But also, there are a range of technical or gameplay problems. 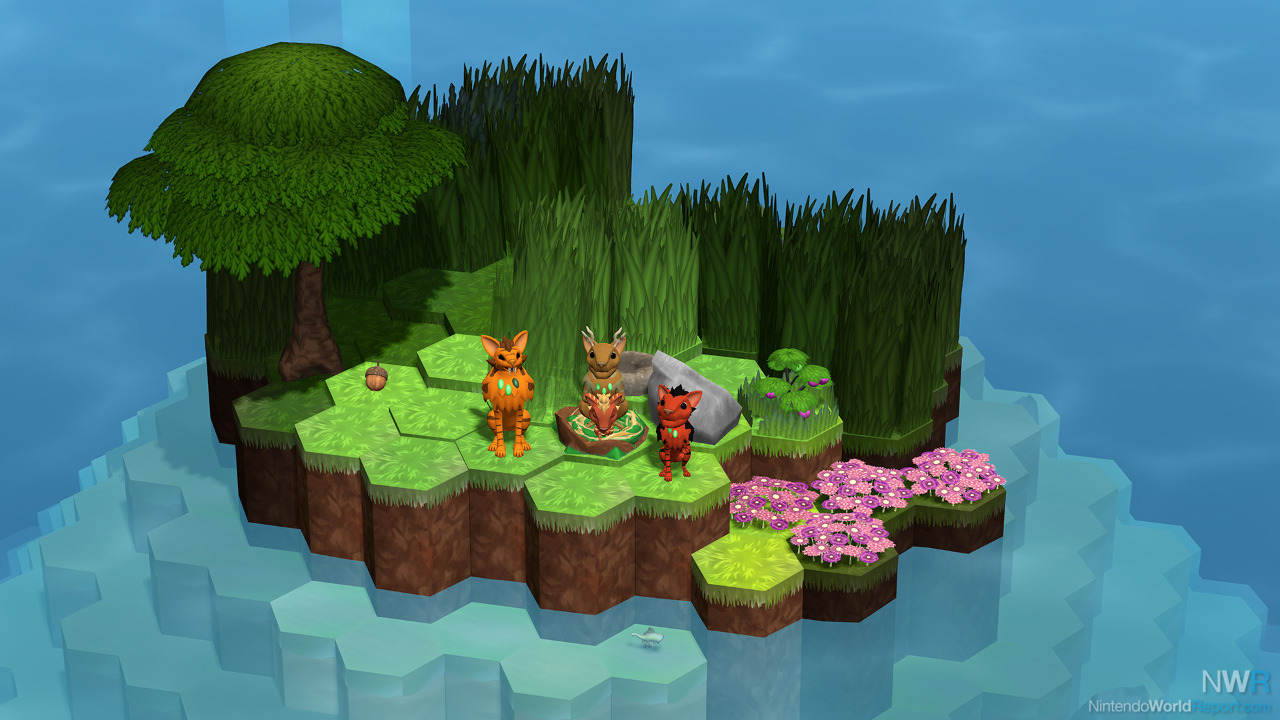 The game was clearly made for PC, because menus tell you to “mouse over” icons to see what they do. Well, I’m using a controller. Control is awkward because you’re using the left stick for some menu actions and the D-pad for others. I would have appreciated some degree of control customization. You really have to manhandle the camera to get a good view of your surroundings and you never really have a comfortable vantage point. Map icons aren’t tied to specific spaces, but to the camera angle, so moving the camera will sometimes put icons in places that don’t make sense, or don’t make it clear what space they apply to. Animals cannot move across areas with tall grass, they can only move into a space with tall grass, and a lot of maps are filled with tall grass, so movement always seems restricted (until you start putting your animals to work cutting the grass down).

In addition to Story mode, there’s a “Sandbox” mode where you can set a bunch of parameters from the get-go, including the win condition. I toyed around with it but seems like it’s best suited to people who already know what they’re doing. If you’re wondering whether you’ll like Niche, you should probably watch some YouTube videos first. As a science lesson, it’s pretty nifty. As a game, I didn’t care for it.

Last question. Do you have strong feelings about the pronunciation of “Niche?”