A serene survival game that has shades of Zelda in its presentation and sailing.

A precarious balance of inspirations helps to make Windbound something unique and special. On one hand, the core survival-based gameplay calls to mind well-worn modern classics like Don’t Starve and The Raft. On the other hand, the overall presentation, third-person perspective, and emphasis on sailing drove visions of The Legend of Zelda series into my head, primarily Wind Waker and Breath of the Wild. The risk at the center of Windbound is regarding the question of whether or not this will all coalesce into something great. Thankfully, the answer is yes, because Windbound, in its mystique, challenge, and shockingly solid Switch port, is soundly excellent.

To open, a storm causes your heroine, Kara, to capsize in the water. She then winds up entering a mysterious portal that takes her to an island in the middle of a relatively empty ocean. All you have at the beginning is a knife. From there, you have to collect resources, climb towers, and build various weapons, accessories, and boats. The resource collection is simple in the first of five chapters, though it deepens and widens as you progress. Almost everything of consequence can be made with just rocks and grass, but you have limited inventory so you can't carry everything. More storage can be added thanks to wearable bags and containers on your boat. It’s still easy to play it safe, but you can also be risky, attacking fearsome wildlife to get rare drops from them, including meat and horns. Of course, there’s a cost in doing so, because Windbound is a spin on the roguelike style. Two difficulty options exist: Survivalist and Storyteller. Survivalist makes it so once you die, you start all the way at the beginning with just the inventory on your person; nothing from bags or boxes. Storyteller only kicks you back to the beginning of your current chapter while letting you keep all of your inventory. Additionally, the combat is a little easier in the second difficulty. Both styles are tough and enjoyable in their own right, doing a great job of satisfying those wanting a sterner challenge while also offering something that is great for those who want something more forgiving. It’s similar to the difference between the basic game and Master Mode in Breath of the Wild. 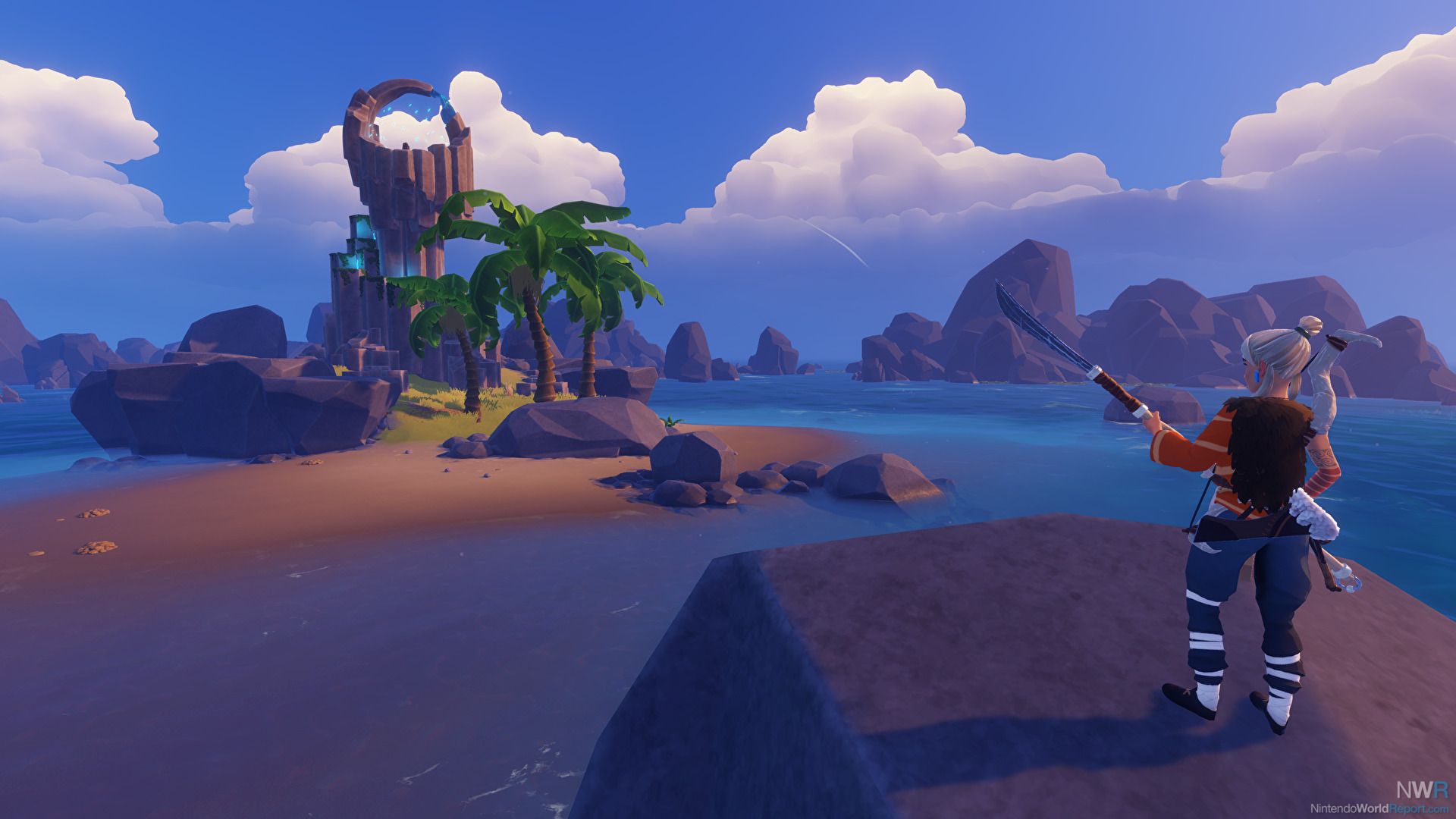 Your movement through each chapter involves exploring islands looking for resources, staying aware of creatures roaming around, crafting new weapons, gear, or accessories, and then sailing around to look for new islands. While it does get tense and stressful, it’s a surprisingly serene gameplay loop. That’s where a lot of the Zelda comparisons shine. Combat isn’t overly complex, though there is a lot of ability to experiment, much like Breath of the Wild. A mixture of melee and ranged attacks have to be used together to effectively take down bigger prey. The sailing feels a lot like Wind Waker, especially when the open water music starts to kick into gear. For better or worse, there is no way to change the winds, which can be annoying at times. The sailing is demanding, requiring you to master raising and lowering your sails to cut through the wind or effectively harness it to move fast.

For my first playthrough, I mostly avoided combat with larger animals, which was an effective strategy, though that limited the kind of gear and items I could make, which felt like it hurt me in the end game. Progression through a chapter involves sailing around looking for three towers. You have to climb each one to activate them. Once all three are turned on, you then head to a structure in the north of the area and move to an interstitial sailing challenge, as well as a showcase of pictorial visions of Kara’s ancestors for a story that’s neat but not something I found all that compelling. The sailing portion here implores you to make sure your boat is fit and ready to survive some tough waves and obstacles, as the music soars and you cascade to another exit. These areas were where I felt the sailing was at its best as you have a relatively straightforward challenge that leans into how fun twisting and turning the sail can be. After that, you go to an area where you can earn a blessing, which is a persistent ability that you can activate for the current or subsequent runs. They vary from starting you off with a specific item to limited stamina drain when swimming. The blessings take a while to really get that interesting, as they’re at their best when you have more of them to choose from. After all of that, you move on to the next chapter, and then rinse and repeat. 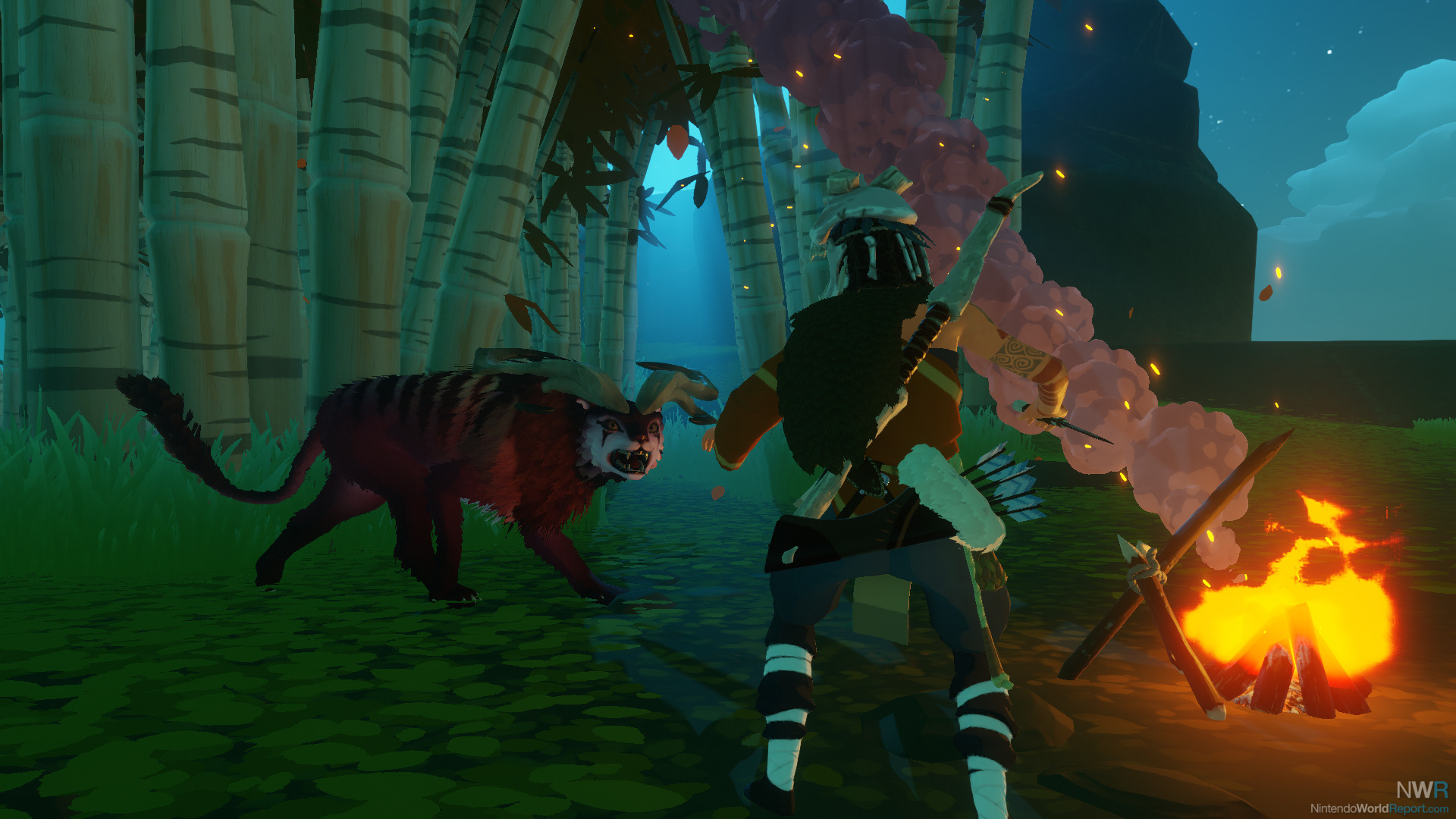 Each chapter adds more complexities, ranging from a wider variety of island types, resources, and enemies. The game is specifically designed to always keep you moving forward. For example, resources are limited in each chapter; nothing respawns. You also have a hunger/stamina meter that depletes over time. It can be refilled by eating food, but with limited resources, you can’t idle around forever. You have to play Windbound at the expected pace; not your own.

Largely, the way the game presents itself as something more tranquil while actually being borderline harsh and time-focused is successful. While I always kept my eyes on my goals during play, I had moments where I just sat back on my boat and rolled with the waves peacefully. This is not to discredit the soundtrack, which is gorgeous and feels like it could be ripped out of a 3D Zelda I forgot about, but Windbound is a solid podcast game. The resource collection, crafting, and enjoyably repetitive structure scratches that itch of drawing my attention in a way that keeps my mind satisfied while still allowing external talking to filter into my brain. 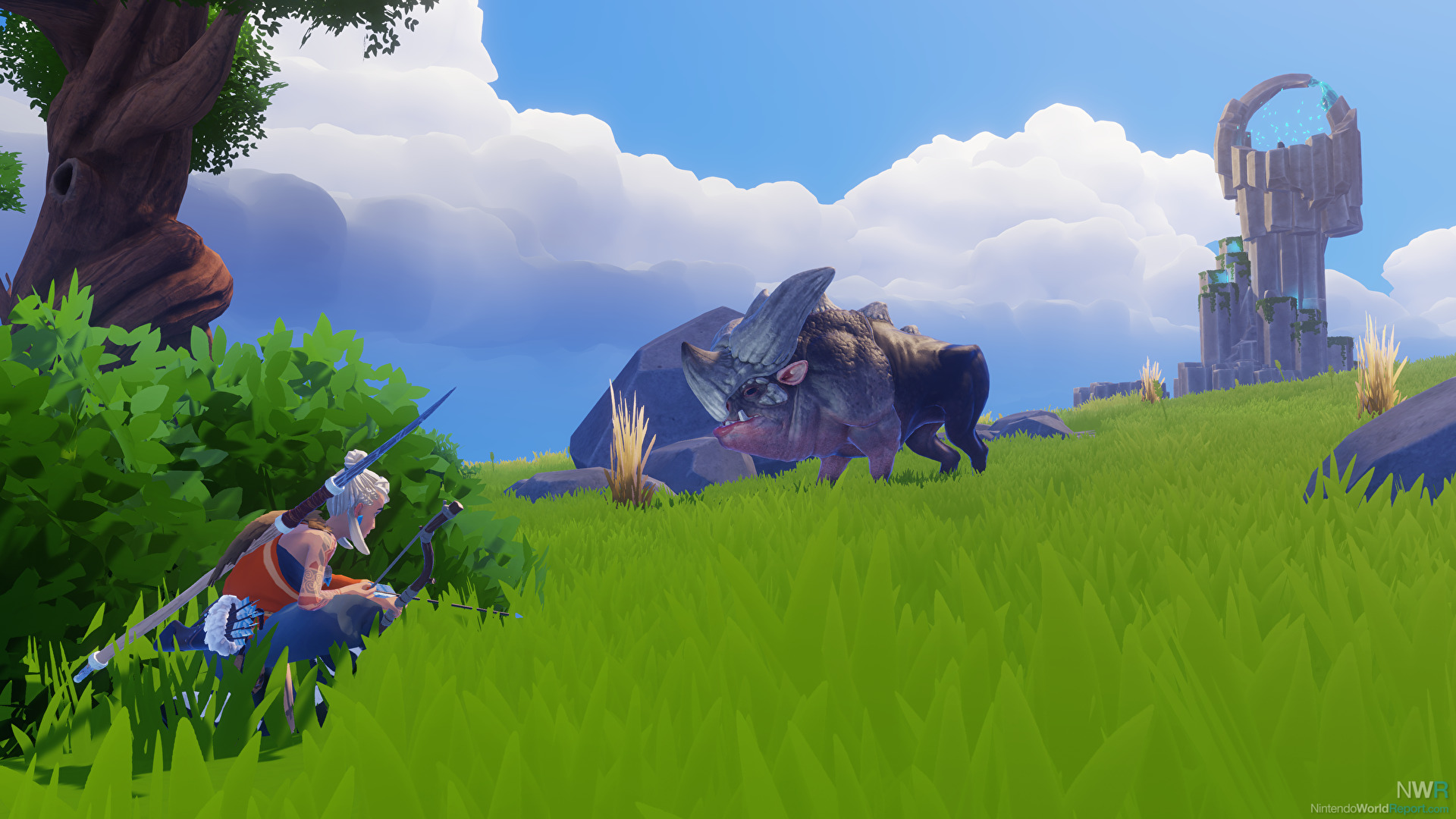 The only issue in the presentation arrives as the single bad thing I noticed about the Switch port. For the most part, I’m amazed by the port of Windbound to Switch. After spending some time with a PC demo last month, I had doubts that the developers would port this successfully. They proved me wrong, as the visuals look great both docked and on handheld. One area where it fell short is that the restricted draw distance made searching for islands, especially in the harder, later chapters, more bothersome. I don’t know if the draw distance is necessarily better in other versions, but I had several instances where it seemed like a sizable, important island would just pop up out of nowhere. Other than that, I encountered very rare framerate drops when the action got busy, but it was never anything that soured my gameplay. I will offer a word to the wise: save often during chapters. It only happened once, but the game crashed on me at the end of a chapter so I had to redo the whole area. It was not ideal.

Windbound succeeds in how it balances so many different elements. Sometimes it can get precarious - sailing definitely had some moments of exasperation - but more often than not, the world of the game was in harmony, with exploration feeding into crafting, combat leading to rewarding resources, and sailing providing the calm middle. Every aspect works together to provide a winning, endearing experience that makes Windbound a special game on the Switch, especially if you’re looking for a survival game with a little bit of Zelda.