An appreciated follow-up that needed a few more editing passes.

Aksys Games’s 2020 unleashing of the “Otome Armada” was all content that was previously localized for Sony platforms, until August’s launch of Collar x Malice Unlimited. The standalone expansion to the modern-day romance visual novel promised a long look at some of the characters who were only briefly interacted with in June’s original. And Unlimited delivers what was advertised, but not without a lot of moments that would drive copy editors to the bottle. 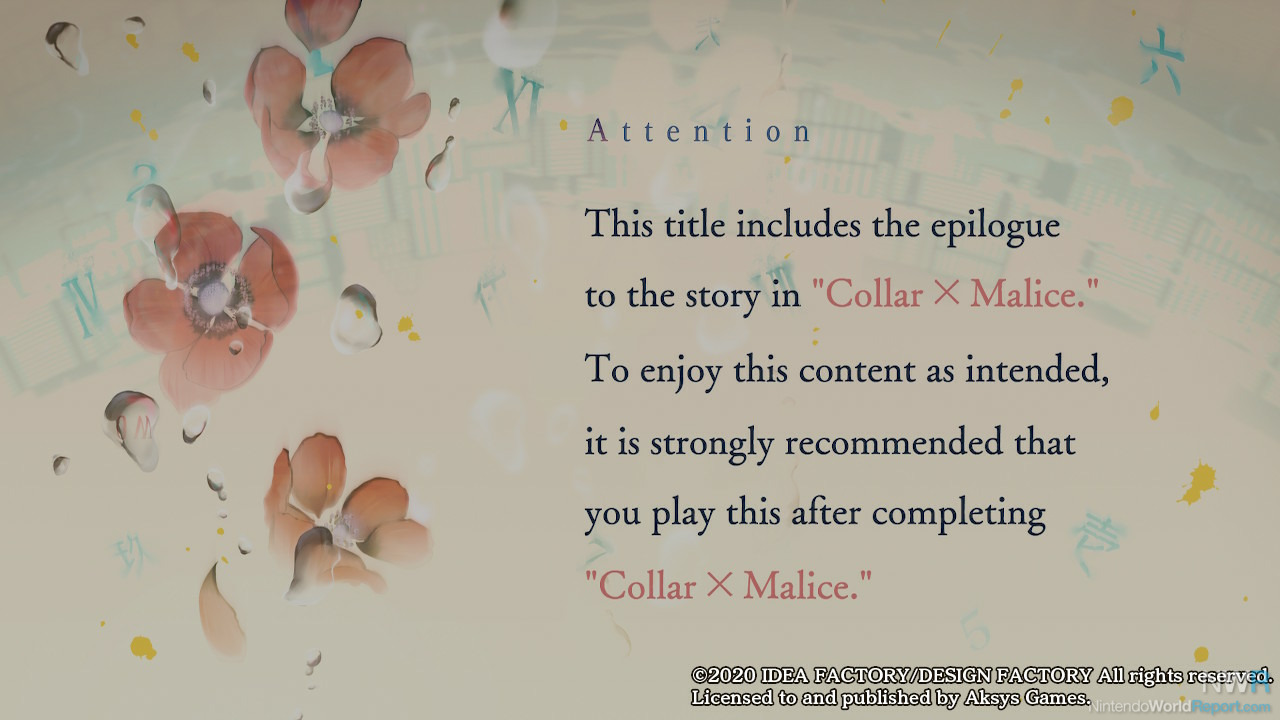 If you don't believe me, believe the developers.

The original Collar x Malice was set in the year 20XX in Tokyo, where your protagonist (default name: Ichika) is a police officer who is kidnapped one night by members of the terrorist group “Adonis” and has a collar that threatened to inject lethal poison. The protagonist had to balance her work as a community police officer with trying to take down Adonis before an event called “X-Day”, with the help of five men who ended up as her potential suitors and the rest of the police force. Unlimited is meant to provide a follow-up to the original story, where the collar is no longer a threat and she is free to explore the relationships she built during the X-Day threat. As such, it is pretty much mandatory to have played the original to avoid spoilers if nothing else.

The core of the story is epilogue stories for the five main suitors, which are unlocked after choosing particular options in a brief prologue story. Completing these epilogues with at least the normal ending unlocks three special stories with side characters that give background on your POV character’s family and gives romantic options for a couple of supporting characters, and clearing all five paths unlocks the Adonis path. This extended path takes place in a timeline based on an ending worse than anything in the original story, and features the protagonist joining the titular terrorist group and being forced to learn about the named killers of the original game. Unlimited gives hints about how to get to the main ending of the Adonis route on an “About” screen, but doesn’t let you get to that ending on a first playthrough; you have one conversation an ingame day with one of nine people for a month, and the tenth (where the true ending comes in) doesn’t unlock until you fail at least once. There’s also some non-obvious answers required in the suitor routes as well to get to the best ending and unlock some intensely romantic content in the extras section.

I haven’t unlocked the timer on the game on the Switch menu yet, but I suspect the clock will come in under the 25+ hours I put into the original even if I go back and 100% it. I did appreciate that they toned down the different types of puzzles: there’s one quick-time event for the whole game, one investigation sequence, and a couple of easy word puzzles. The time with the suitors is all set after the events of the original, though I did find a few times where the protagonist and her suitor du jour were rehashing old arguments in an attempt to pad things out. The side stories were mostly entertaining, including the one focused on the protagonist’s brother, but I did find one route that attempted to build a relationship between the protagonist and someone far higher up the chain of command in the police to be creepy. It wasn’t just the power imbalance either; the age difference alone (early 20s protagonist, early 30s-at-best officer) was enough to give me pause.

The biggest issue I had with the original release were general text problems, such as typos, oddly placed words, and unexpected behaviour in the text boxes. Despite the fact that Unlimited has never been officially localized before, the typos actually got worse. Misplaced words, words or phrases duplicated on the next line, and just odd turns of phrase are plentiful: I think there’s more typos on some of these routes than the golden route in the first game. There’s even little things like a shift key not being hit to close a parenthetical that actually got in the shipping game. 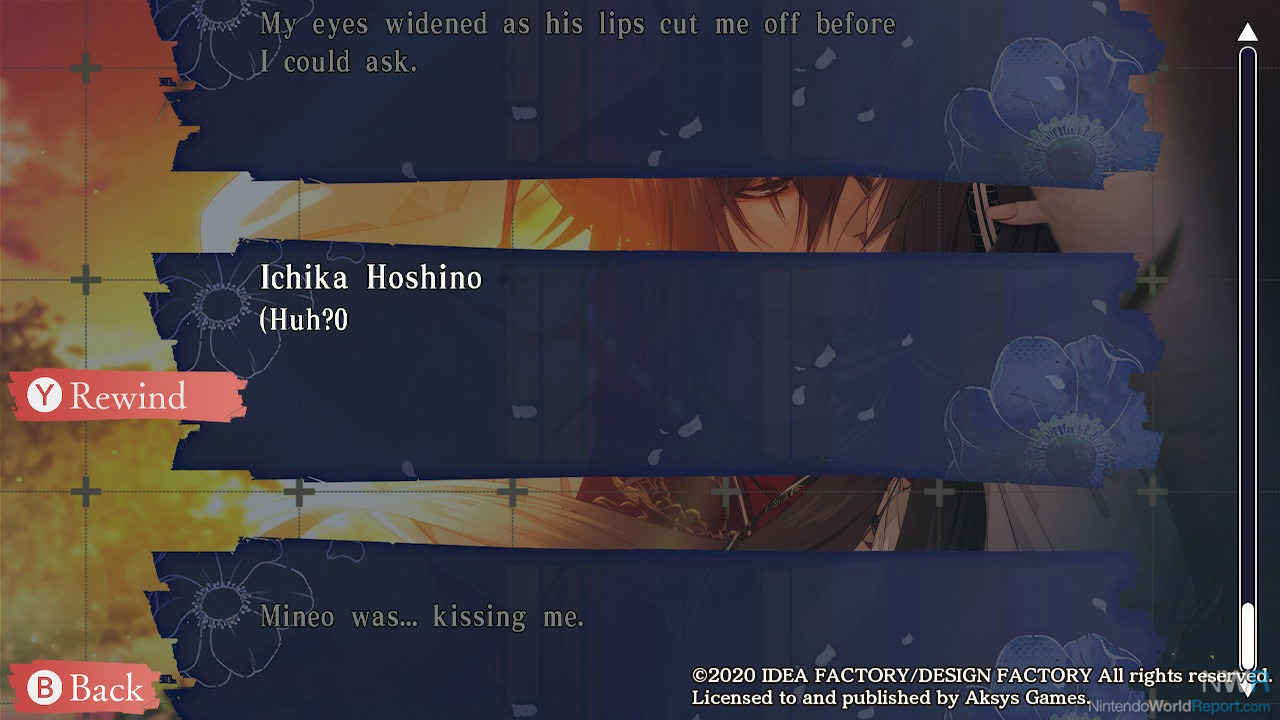 Localization can be a bear, but I suspect I’d burn my entire vacation from work if I sat down with the script and corrected this stuff. There were also a few times where the text, which is normally capped at three lines, would go to four or five lines in a box that clearly wasn’t designed for that. I had to pull up the archive a few times to read the whole box, which ended up changing this review from an unscored one to one with a score. That’s how bad it is.

It’s easy in these expansion packs to try and reuse all the assets possible to tell new stories. Although some environments do repeat from the first game, there’s plenty of new ones as well as the in-game quarantine is largely over so the characters can travel more. There’s new songs seemingly for every route as well, and the side routes give the voice actors more chances to stretch their roles out. The nicest of the named killers, who otherwise sides with your character in every route, gets meaningfully angry in the Adonis route and I felt it in his voice. 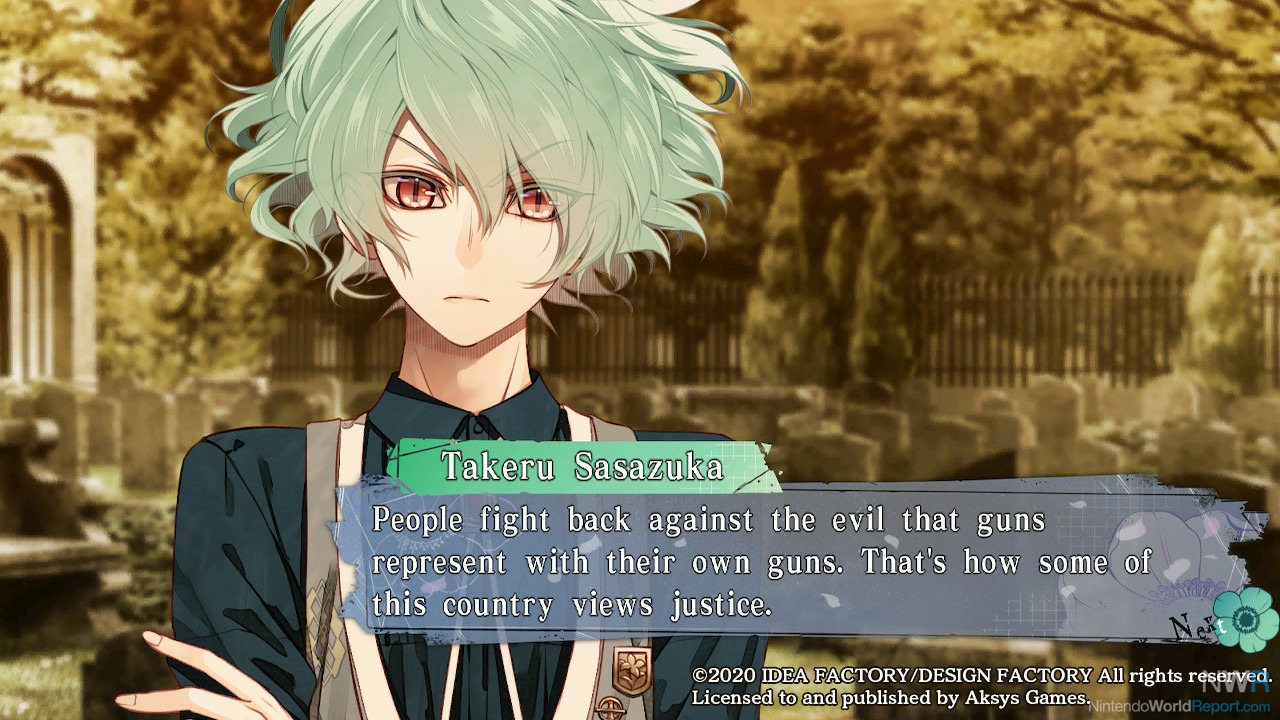 It’s hard to find a close comparable for Collar x Malice Unlimited. I loved the story of the first game and appreciated the chance to see where things went, but the text issues just became too much for me to handle. If it gets redone however, I will dive back in to relive some of these moments again.