Samurai Jack was a staple of my childhood. Originally premiering on Cartoon Network in 2001, it has since become one of the most celebrated animated children's shows of its time. Part of what made Samurai Jack such a lasting legend was its blend of masterful storytelling, often with little to no dialogue, relative child friendliness, and incredible art. The series would return years later, with a darker tone, aimed at the now adults who had grown up with it. Now, Samurai Jack: Battle Through Time seeks to revisit classic Samurai Jack locations, two decades after they were first seen, and potentially introduce the series to a new audience.

Jack has been sent to a strange interconnected world between time. Within it, old enemies return, as do familiar allies. Jack must fight his way through this twisted version of his adventures in order to get to Aku (his perpetual enemy). While most of the game is presented in 3D with full range of movement, segments occasionally play out in 2D as well. Friendly characters are scattered throughout each level to give you tips and items, with plenty of hidden areas and treasures to reward the curious. Each level ends with a boss fight, before grading you on your performance.

At its most basic level, Samurai Jack: Battle Through Time is a hack and slash. Three branching skill trees and a diverse loot system involving multiple weapon types build on that experience, but the core of the gameplay is simple. Y for a quick attack, X for a heavy attack, dodge with A, and parry with L. Plenty of additional complexity is piled on top, but unfortunately those core elements just aren't as fleshed out as they ought to be. Jack's movement is stiff, timing on parries is awkward, and it never feels like there's much of a difference between quick and heavy attacks. These issues can be adapted to over time and developing your skill tree can help to mitigate some issues, but Battle Through Time never feels as good as it should because these core mechanics are honestly a little rough. That being said, if you can look past these concerns, there is more to see.

The sheer number of options for upgrading Jack’s abilities, leveling up his skills with certain weapon types, and the myriad of weapons you can collect are all pretty incredible. While you'll always have your trusty sword and a remarkable ability to punch the crap out of robots with your bare hands, varied weapons, like spears, scyths, maces, bows, guns, and shurikens spice up your arsenal and each come with their own strengths and weaknesses. Each weapon type can also be leveled up individually and comes with its own skills in the skill tree.

While the gameplay is simple, it can be approached from a variety of angles. What surprised me most about it, however, is how challenging it can be. Early on enemies are remarkably easy and seem morally opposed to harming you in any way. But as soon as you reach the first boss fight, things begin to take a turn. A few levels in, I had gone from mindlessly pressing the Y button to having to carefully dodge and block every attack. The difficulty curve can be sharp at times, and it does cast a spotlight on the awkwardness of the base mechanics. It doesn't help that as things get more hectic, so too does the framerate. Large fights with lots of enemies tend to drag the framerate down significantly, making well-timed counters even more challenging.

Where Battle Through Time truly excels is in an area the original show aced as well: its art and animation. While not cell shaded, Jack’s expressions and movements line up excellently with his cartoon counterpart. Those who watched the show will know that Jack's most epic battles often ended with his close torn and his hair falling out of his top knot. The same happens here with Jack getting more and more disheveled as he takes damage. The attention to detail is wonderful. While some early environments can at times look a little drab, later ones truly shine with bright colors and high contrast. While many of the side characters are relegated to text boxes only, Jack and other key characters are all portrayed well, and Jack is just as I remember him.

While Samurai Jack: Battle Through Time could ultimately do with some more focus on its core elements rather than its extensive side system, there is enough here to be enjoyable. For fans of the series revisiting these classic locations and characters years later can help push through the rough spots. It may not win over any new converts, but longtime fans shouldn't have too much trouble looking past some faults purely for the joy of seeing Jack once again. 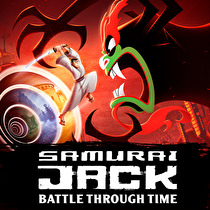