Like a phoenix rising from the ashes, and then immediately falling asleep.

Phoenotopia: Awakening isn’t the first game to try its hand at improving on and building on the foundation of Zelda II: The Adventure of Link. It mixes an overworld with smaller towns, caverns, dungeons and the like, and there’s no shortage of activities to do and color to enjoy. Whereas Link’s second outing on the NES was fairly linear, at least on the surface, Phoenotopia is filled with treasures and grinding to be done. The inclusion of a stamina meter, a muddled sense of direction, and a frustrating difficulty curve make Phoenotopia an acquired taste, and so it certainly has that in common with the infamous Zelda sequel.

The story takes place centuries after a great war decimates the earth and humankind has to rebuild the world and itself. Pink-haired protagonist Gail leaps out of bed and leaves her room, one of many in a large house. After exploring a little bit and talking to a few NPCs, a character named Nana tasks you with rounding up the kids who’ve gone outside the village to play. It’s apparent early on that you need to talk to people and explore thoroughly to make progress, and in that way it’s much like an RPG. However, the downside is that there are so many people to talk to and rooms to explore, even in the opening town, that the beginning of the game feels a little overwhelming. 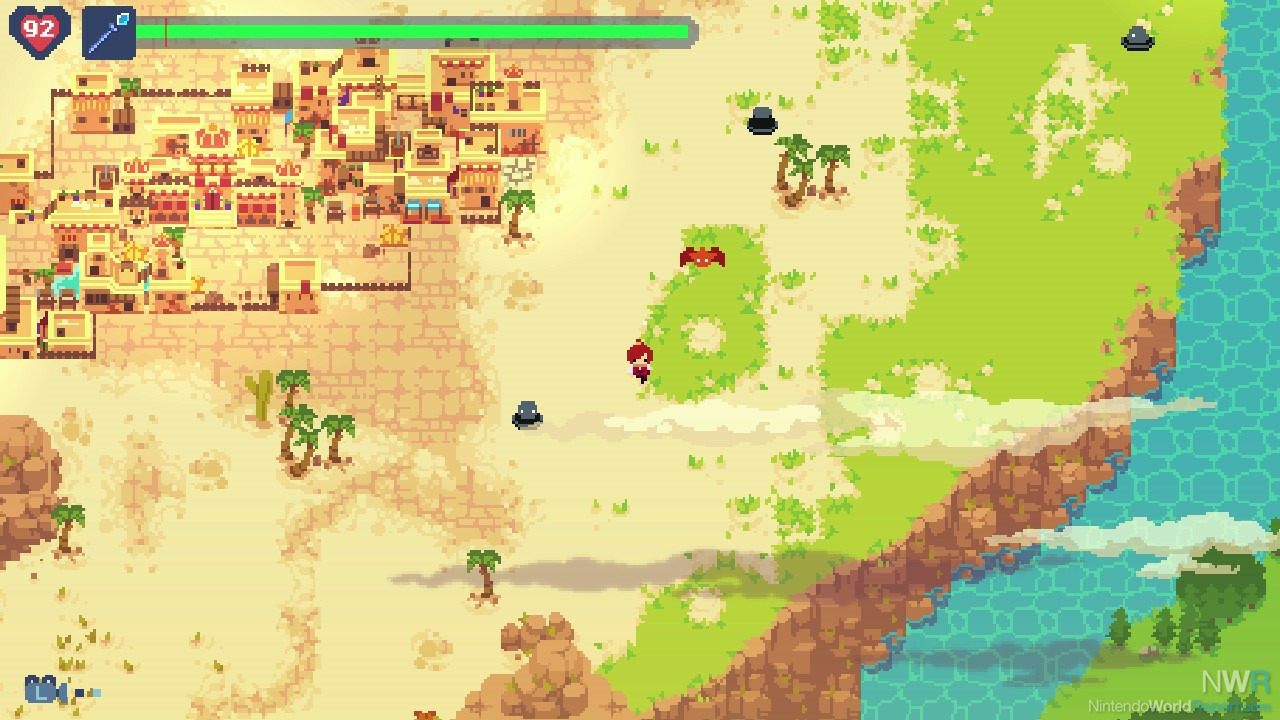 After picking up a wooden bat in a nearby warehouse by solving a simple moving-block puzzle, Gail is free to exit stage right. Doing so leads to an overworld area where enemies pop up periodically; by walking into them, you enter a small area with enemies to battle, much like the encounters in Zelda II. After reaching the forest where you’ll retrieve Nana’s children, Phoenotopia’s game mechanics become more pronounced: platforming and verticality are emphasized here, and blue books that function as save points start to dot your path (although not as frequently as they maybe should).

In addition to sprinting and jumping, Gail has a basic attack and a charged attack that both consume portions of her stamina bar. Unfortunately, the inclusion of a stamina mechanic is a definite hindrance here; enemies pack a mean punch, and it’s easy to become surrounded by them. Having to rely so heavily on evasion while recharging your meter is less fun and more cumbersome. While exploring dungeons and caverns, you’ll come across orbs and other objects that need to be collected to progress, but there are scores of treasures to find, too. Many of these reward you with coins that can be spent on mini-games, items, and equipment. You’ll also come across Energy Gems and Heart Pieces (lawsuit pending) that bolster your stamina and health; it’s not an exaggeration to say that scavenging for these stat boosts is a necessity. 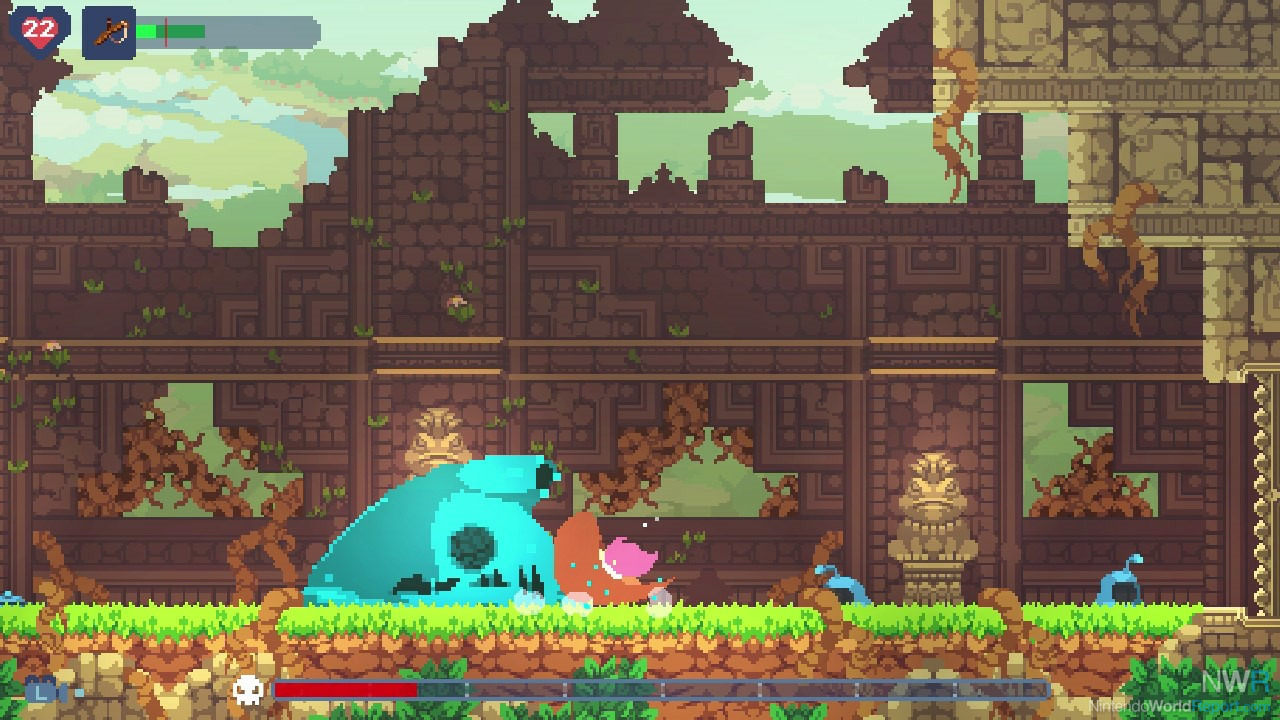 Combat doesn’t feel great here. Gail’s basic attacks feel delayed, and most enemies take multiple hits to bring them down. The boss of the first dungeon, a giant slime, represents a formidable foe that took me almost a dozen attempts to overcome. To assist you with these challenges, Phoenotopia has an interesting cooking mechanic whereby most consumable items you pick up can be roasted over a fire to improve their effectiveness. It’s vital that you acquire as many food items as possible and cook them whenever you can.

While the opening dungeon and town are manageable, the next segment of the game, a desert settlement called Atai Town, is sprawling and filled to the brim with places to go and people to see. Like the dry desert air here might parch a traveller’s throat, so too did Atai Town leave me thirsty for a more condensed and less busy environment. There are dozens of NPCs to talk to, many of whom won’t offer much of consequence. While there is some witty and charming banter to me found, you’re likely to spend hours just going in and out of houses and speaking to everyone in order to determine your next goal. And just when you start to make some progress in that department, you’re tasked with rounding up yet another group of children. Gail could make a killing just in babysitting fees. 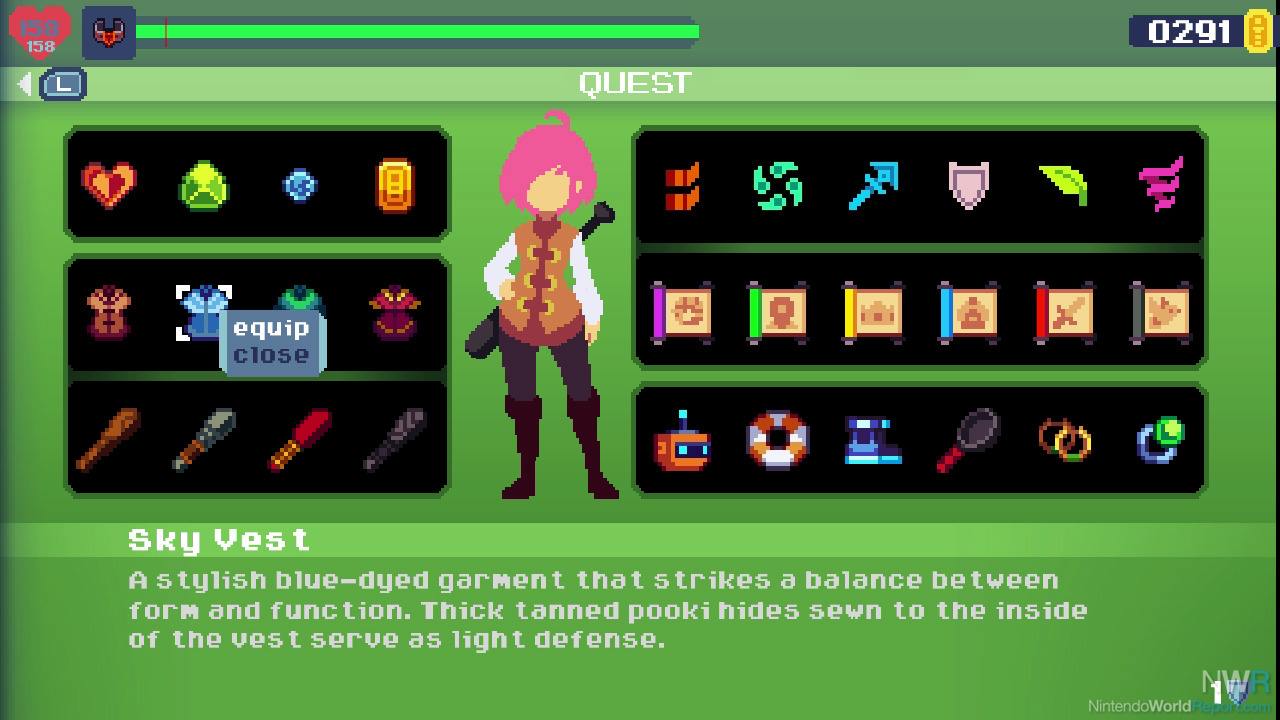 The more progress you make, the more arduous the journey, and weapons and items that might make the adventure go a little smoother are expensive and require grinding and thorough searching. That seems to be the aim of Phoenotopia: an experience padded out through repetition and aimlessness. It just takes so long to figure out where to go and what to do next; when you finally arrive at your destination, you’re beaten over the head by damage-sponge enemies and deadly traps. The minute-to-minute gameplay stops being fun as instead leads to confusion and frustration.

Phoenotopia is ambitious, and it stumbles over that ambition. By attempting to cram so much into its world, it sacrifices enjoyable gameplay and the sense of accomplishment that comes from completing achievable tasks. By the time you get anywhere in this game, you’re too exhausted to really celebrate it. The pleasant music is a strength, and the pixel-art environments are colorful and detailed, but the art style can also obscure important background elements. Too many NPCs, too many doors, and not enough direction may not dissuade you from giving it a try; achievements and a lengthy campaign provide lots of content for those who want it, but at least give us a map screen. All told, Phoenotopia: Awakening could probably use a little more REM sleep to get some much-needed editing in.

Wow didnt expect a low score I thought this game looked quite promising. That being said, I still think I will check it out but maybe now wait for a sale. Good review. I think the negatives you mentioned might not be dealbreakers for me yet..

Wow didnt expect a low score I thought this game looked quite promising. That being said, I still think I will check it out but maybe now wait for a sale. Good review. I think the negatives you mentioned might not be dealbreakers for me yet..

This game will find an audience, but I found it more bloated and cumbersome than enjoyable. For my money, it needs to trim the fat rather than stuff the world full of mostly inconsequential activities.

It doesn't help that a single death brings you back to your last save with all of your progress lost.

Oo never enjoy punishing death mechanics. That may be a dealbreaker