The Warhammer miniature tabletop universe is a medieval fantasy, but much like how Persona took over from Shin Megami Tensei, the sci-fi Warhammer 40,000 spinoff has become the most popular miniature game in the world. Its sci-fi setting adapts to video games well—there’s a game literally called Warhammer 40,000: Space Marine. The Switch has attracted the “40k” strategy games with January’s Space Wolf and now Warhammer 40,000: Mechanicus, which had its console debut announced in March’s mini Direct. Mechanicus as a game is mechanically sound, but its structure and the environments are incredibly oppressive.

Bits for the bit god.

Mechanicus takes place across a series of planets in the Warhammer 40k universe, though you’ll spend most of the time on the planet Silva Tenebris or on your ship, the Caestus Metalican. The ship is where you outfit your main soldiers (“Tech-Priests”) with different weapons and boost their abilities in order to deal with missions entrusted to you by a series of named assigners on your ship. Instead of having a defined mission count, Mechanicus essentially runs on a timer: completing missions adds to an “Awakening” meter (at least 3 points per mission) and the final boss becomes available to fight once the meter hits the 70% range (if it hits 100%, you’re forced to fight the final boss). Each mission involves going down to the planet’s surface and exploring a map with various permutations of choices that can provide rewards or penalties, or combat encounters. There will be at least one combat encounter in each area, and its placement is purely random: I’ve triggered fights in the first room selected, even if most of them are saved for the end. Moving to new rooms will cause the Awakening meter to go up, with in-battle effects the higher it goes, in addition to allowing for fewer missions the more you dawdle. It’s an interesting structure but really required a guide for me to grasp it. Luckily, the auto-save function fires enough that it’s somewhat easy to re-roll rough setups to the point that I didn’t even bother making a manual save until the third session.

The battles are an overhead view at an angle (isometric), with the ability to circle the camera around, though there were several instances where enemy reinforcements overrode the camera setting I was using, much to my annoyance. The Tech-Priests are the equivalent of COs or lords in other strategy games, though it’s possible (and encouraged) to bring more than one into a mission and failure is only caused by losing all of them. Permadeath is not an option here, but there is an experience cost for post-map repairs. There are different groups of grunt soldiers unlocked throughout the story who, at worst, can be deployed as meat shields. Each grunt and Priest has a “Cognition” meter that determines how many and what kinds of actions they can take, with stronger attacks using more of it. Enemies auto-revive after a time, starting at three turns and shrinking to eventually immediate revival if the Awakening meter in the dungeon is high enough. The options for avoiding revival of enemies are simple: attack while they’re down (a single hit works and can’t be evaded) or get the kill shot with a critical hit. 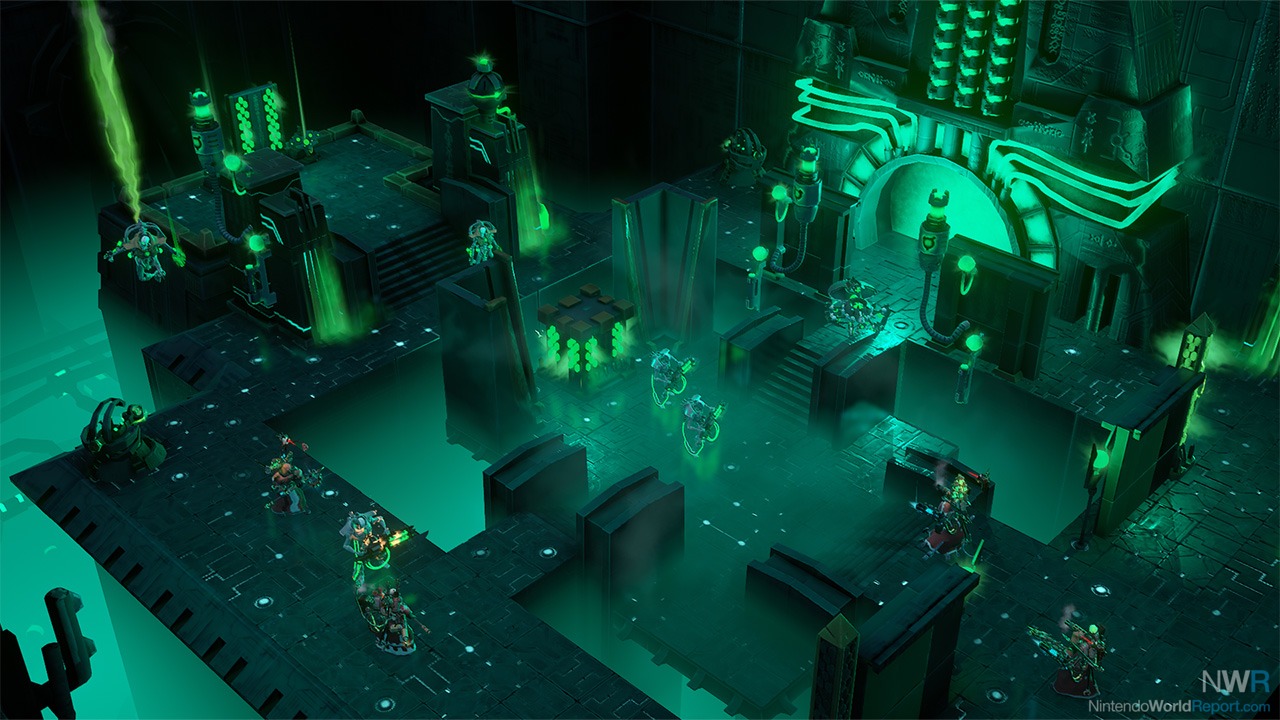 It's not easy being (in a sea of) green.

Building the Tech-Priests is probably the most complicated part of the game, and it’s the easiest thing to mess up. The experience (called Blackstone) is spent on seven different paths for building talents in melee or ranged combat, healing, movement, and buffs/debuffs, as well as unlocking new pieces of armor. New weapons are frequent mission rewards, but going into one mission I ended up with a priest whose sole attacking move required 3 Cognition to use and didn’t have a way to build up Cognition sufficiently, which necessitated a reload. Completing various objectives unlocks special abilities that also have to be equipped pre-mission called Canticles, which level up for higher achievement levels and provide big damage/healing/movement boosts. I spent a fair bit of time working out what combination of weapons, Canticles, and growth paths would provide quick clears in order to keep the Awakening down in order to complete more missions.

As befits a game set 40,000 years in the future, Mechanicus’s environments are sterile and very gray/green, which made the missions themselves feel identical after a while. The fact that I ran into multiple consecutive missions with tombs probably didn’t help matters. I found the text to be small enough on my TV, and playing it handheld (both undocked and on a Lite) only exacerbated the issues. The music is basically non-existent, and the default sound settings are incredibly quiet in any event.

There’s a solid game in Warhammer 40,000: Mechanicus, even if it’s not an environment I don’t want to spend any more time in. If you’re in the mood for a little sci-fi strategy and are cool with a game featuring heavy doses of faux-religion, then be sure to enlist in the Mechanicus army.

A review ode was provided by the publisher.