A smart digital CCGs with lots of content and strategy.

In recent years, I’ve found myself gravitating heavily toward digital CCGs (collectible card games) whenever I’m craving a quick gaming session - each match can give you a bite-sized gaming experience with a satisfying beginning, middle, and end, all within the span of a few minutes. Matches can feel wildly different from the previous ones, depending on your card collection or that of your opponent. My go-to for years has been Hearthstone, but I’ve dabbled in plenty of others, despite never really getting into Magic: The Gathering when that was originally booming. Released on PC and Mac a few years ago but now available on Switch and Xbox One, Faeria takes that CCG concept and adds a whole extra layer of board-game style tactics, resulting in a deeply satisfying genre mashup of chocolate-and-peanut-butter proportions. 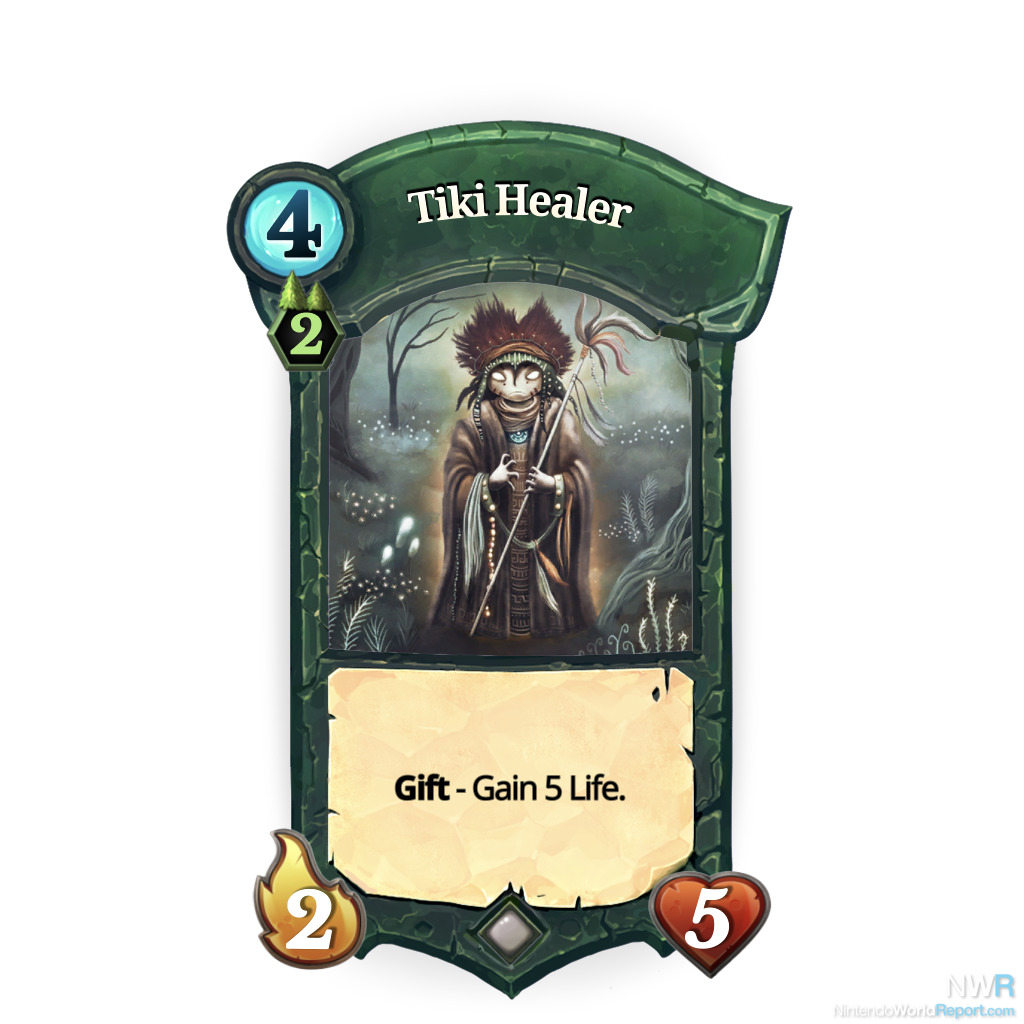 Not only do you have your typical constructed deck of cards which includes various creatures, each with their own health and attack values and special abilities, along with “events” (which are basically spells), but you also have a large hexagonal grid on which to play those cards. At first, the entire grid is filled with water, and since you must play your units on land, part of each turn includes creating land tiles, starting from your “hero” character on the lower edge of the board and branching outwards. Land tiles can be one of four terrain types (forest, lake, mountains, or desert) or they can be neutral, and the units and spells in your deck correspond to these types, each having a cost not only in “faeria” (which is what other CCG games would often call mana, more on that later) but also in specific land tiles. For example, the Tiki Healer unit costs four faeria and requires two friendly forest tiles to be on the board - and on top of that, the unit must be placed on a forest tile when played.

This system requires you to be not only mindful of the types of lands you’re playing, but where on the board you place them. Some more advanced cards actually require multiple land types (for example: one lake and one desert), but most require just one land type, encouraging you to focus your deck construction on a specific terrain in order to be most effective. Additionally, you can choose not to play land at all on your turn, and instead choose to draw an extra card or gain an additional unit of faeria. Having all these options at your disposal on each turn creates a very dynamic and rich feel in every match without relying on a lot of random card effects (I’m looking at you, Hearthstone). 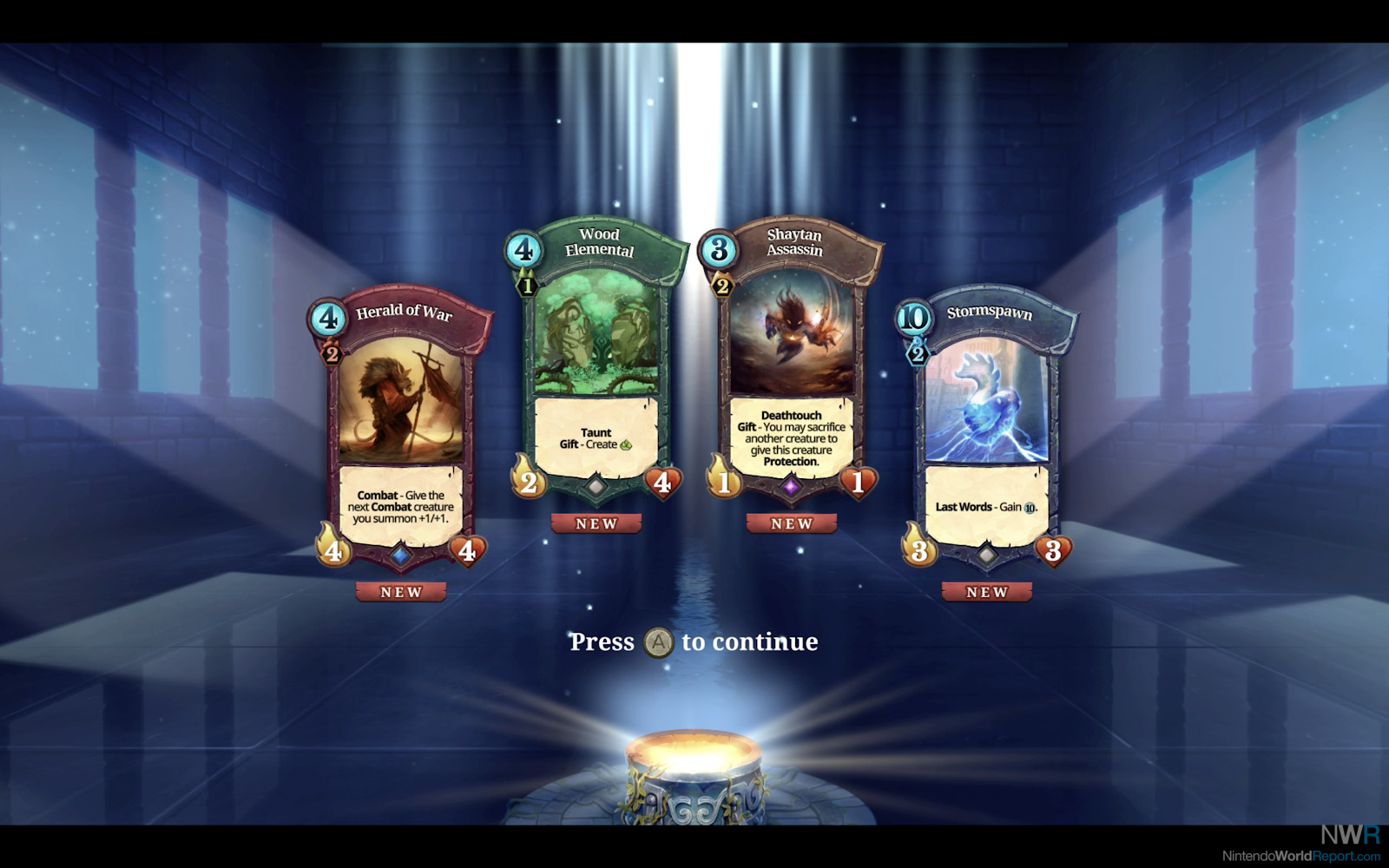 The goal of each match is to march your units across the grid toward your opponent’s hero and to take down their health. Each unit can generally move once and attack once per turn, and there are many variations in the form of “keywords” that affect how units can move. For example, units with “Flying” can move over water or land, units with “Jump” can move two spaces at once, units with “Charge” can move multiple spaces as well but can’t go through other units, and units with “Aquatic” can only move through water or lake tiles. There is a lot of unit variety and the possibilities feel vast. On top of all this, there’s also a layer of resource gathering. Each turn, you automatically receive three faeria (the “mana” resource used to play most cards), but you can also gain more faeria by moving units next to faeria wells. The standard game board has four faeria wells, located in four of the board’s corners, and controlling these wells can make all the difference in whether you’ll win the match. I’ve had some success in employing a “rush” strategy, moving straight toward the enemy hero while ignoring the wells, but I’ve also experienced a lot of failure with that strategy too.

The Switch version of the game features both touch controls and button controls, and both work very well. I was pleased to see that the game doesn’t use a virtual mouse cursor controlled by the analog stick - rather, the game intelligently highlights cards, units, and lands in a way that doesn’t require any hunting and pecking. 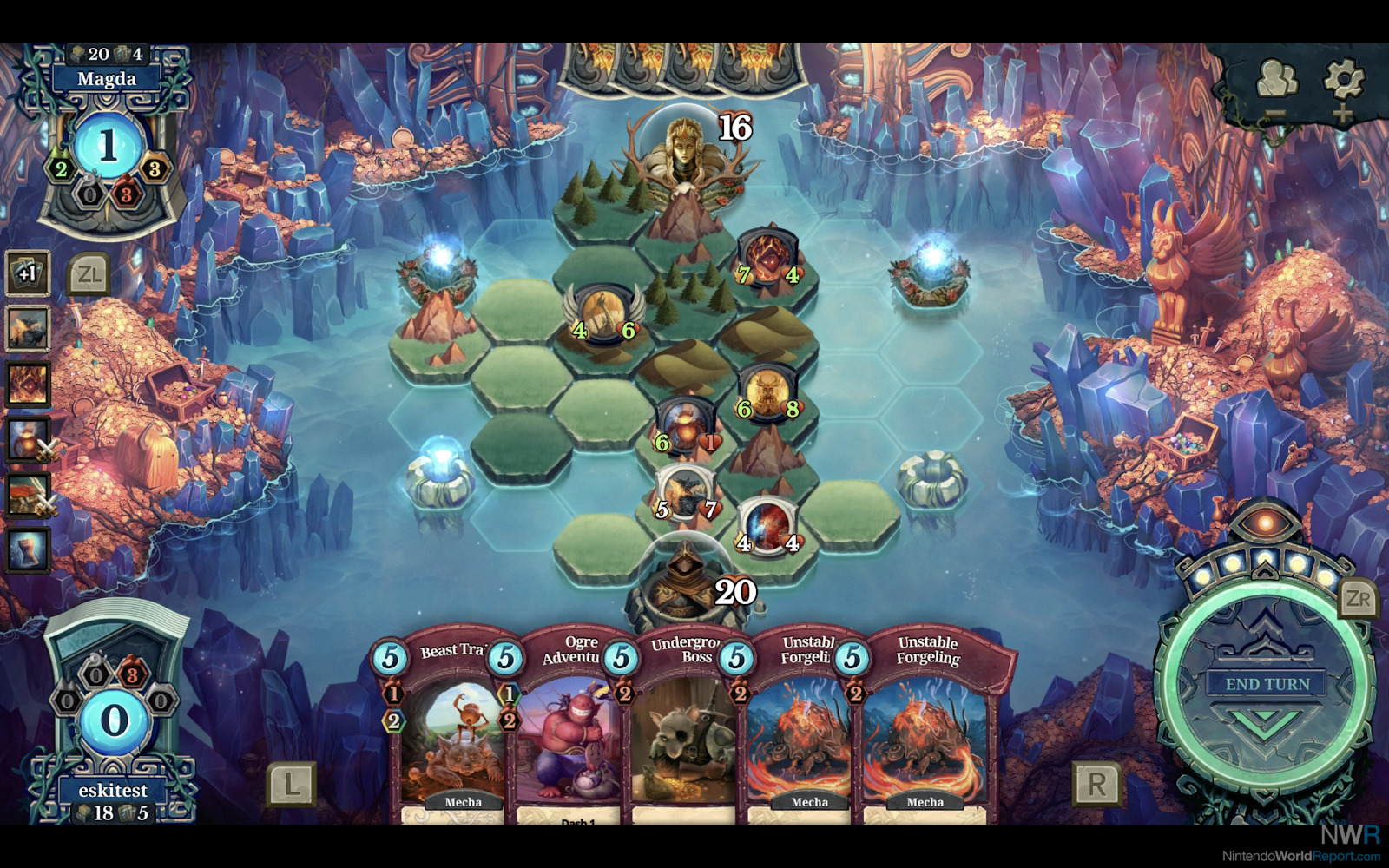 Faeria includes an impressive number of game modes, both single-player and multiplayer. The four main categories are Adventure (which has four distinct single-player or co-op modes playing against the AI), Battle (which includes casual and ranked online multiplayer matches, using a ladder system similar to Hearthstone), Pandora (a mode allowing you to draft a temporary deck from a random selection of cards, letting you play with advanced cards before you’ve managed to add them to your collection, and including the option to play against either AI or human opponents), and Puzzle (a collection of over 100 unique boards that must be completed in one turn using a given set of cards and pre-placed units, ranging from trivially simple to brutally difficult). The Adventure category alone has many, many hours of gameplay included, include a full online co-op campaign called Oversky, pitting you and a friend against a difficult common foe across 20 levels. As for the multiplayer 1v1 Battle mode, matchmaking seems to work quite well; even though the game is several years old on PC and Mac, the game was generally able to find an opponent for me within a minute or two of initiating a search, and the online community for this game should hopefully grow even more in the future, as the game is being newly released on both Xbox One and Switch and features cross-play between platforms, though, unfortunately, no cross-save.

Faeria is also unique among digital card games in that it employs a “living card game” model. Rather than using the typical free-to-play model of selling individual booster packs which may or may not include cards you want (often including duplicates of cards you’re already maxed out on), Faeria instead charges money for the base game but allows all cards to be earned naturally through the course of playing through the content, and card packs that you receive while playing the game will never include cards that you’ve already maxed out. This means that once you have all the cards, you won’t receive new card packs at all, but you can instead get packs that reward you with cosmetic items like new avatars or card backs. The base game contains over 300 cards to unlock, and there are a few paid expansions that include several dozen new cards, but there’s no way to pay real money for individual packs of random cards, and this feels like a breath of fresh air.

However, there is one major way in which Faeria is similar to other multiplayer digital CCGs, and that’s its always-online nature. When you first launch the game, it will automatically create an account for you that is tied to your Nintendo account, and the game wants you to always be logged in when playing - even when you’re playing single-player content. The game stores your card collection and progress in the cloud, so if you ever lose network access, the game just stops working and sends you back to the splash screen as it tries to reconnect. This is particularly problematic on the Switch due to its portable nature (forget about playing Faeria in the park unless you have a WiFi hotspot), and the game also loses connection whenever the Switch is put in sleep mode, causing some friction every time you wake it back up.

Aesthetically, the game is quite beautiful, with lots of colorful and painterly pieces of card art and several highly detailed and striking game boards. My only complaint about the visuals is that the “explainer” text that appears above each card when highlighted is quite small, particularly in handheld mode. It’s readable but could have been optimized better for the Switch. This text explains the meaning of each keyword on the card, so once you have the keywords memorized you don’t really need to read this text ever again, fortunately. The music is fairly typical fantasy orchestral fare which doesn’t detract from the experience but isn’t particularly memorable either.

From its singular mixture of card game and board game mechanics, to its wide variety of game modes and content (including online co-op, a real treat for a game in this genre), to its consumer-friendly progression system that eschews microtransactions, Faeria is attempting to stake out a special place in the pantheon of digital card games, and despite a handful of technical flaws it absolutely succeeds.