A dark, twisted puzzle-platformer winding its way through a mental health maze.

Games centering on the struggles of mental health have become more and more prevalent as indie developers have been given the tools to make their projects from start to finish without having to rely on large publishers or funding to see their vision through to completion. Previously known as Once Upon A Come during its successful Kickstarter campaign, Neversong brings Zelda-inspired puzzle-platforming to the Nintendo Switch—with a beautiful mix of dark themes and aesthetic. As charming, well-made, and thought-provoking as this experience may be, some issues with inaccurate hit detection, non-user-friendly level design, and a story twist that adds more questions than answers come together in a title that is recommended but not a must-play.

The protagonist of Neversong is Peet—a comatose young boy in search of his kidnapped girlfriend, Wren—who utilizes tools discovered through the game’s progression in order to unlock new areas, similar to The Legend of Zelda. Along this journey, you encounter a cast of wacky children, each with their own issues, as they aid you in your quest to save Wren. Their parents are missing, and some of them have become the boss monsters you have to face, but Peet’s main objective is to discover the secrets of his hometown, save the girl, and defeat the maniacal Dr. Smile. The subtlety and discovery of this tale are things of beauty, with well-written dialogue and clues along the way, but the main story twist—though unexpected—makes you question swaths of the journey and opens up a new slew of questions rather than solving old ones. Though not a bad way to end things, it definitely doesn’t feel complete or as satisfying, which is a huge bummer in a story that leans on its twists, turns, and hidden meanings. 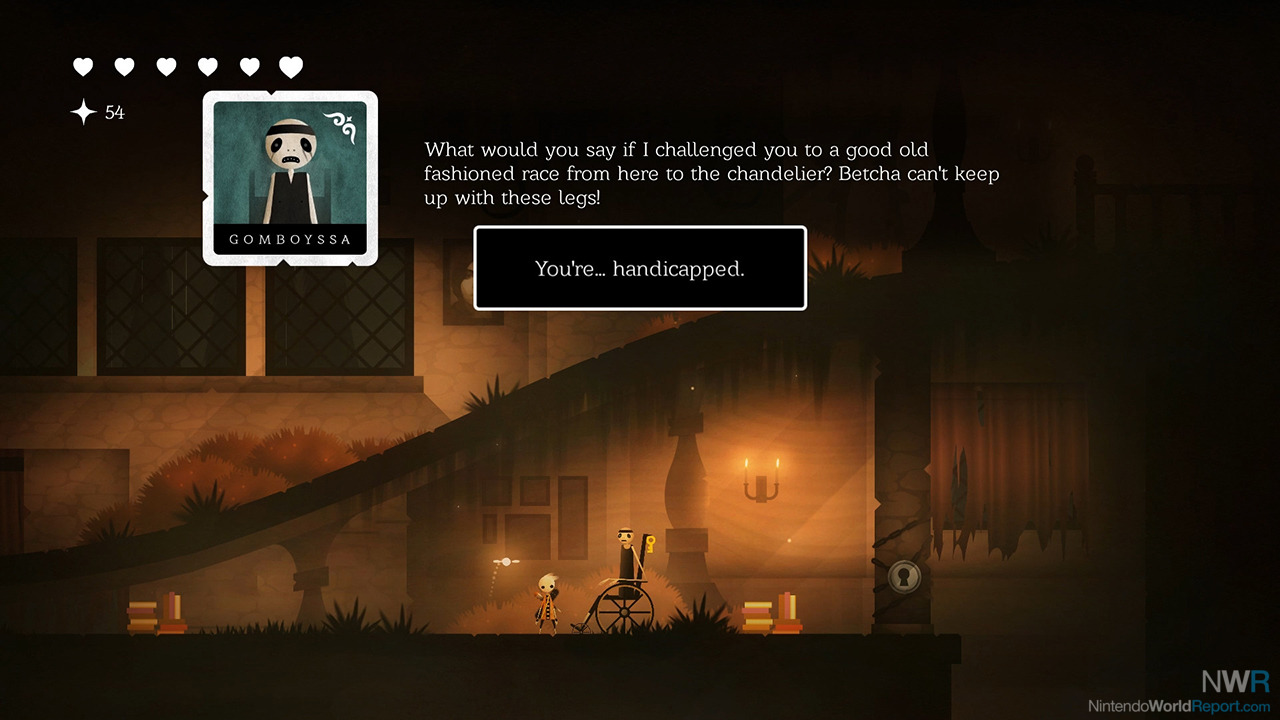 Platforming is your main mode of transportation, where being able to make those tough jumps and navigate through each area properly is a necessity. Speed becomes a mechanic through the use of the skateboard and time-based puzzle-solving, as well as the use of the baseball bat swing and umbrella to add height to the mix, making for some complex platforming challenges that may take several attempts. The difficulty of the jumps adds value to this adventure, but this is where the level design comes into question, as these elaborate, step-by-step maneuverable areas can sometimes lead to a restart if a jump is missed. Several times, it didn’t feel like failure was taken into account, where your landing pad may take you multiple screens away just to get you back to the start of the challenge. This can add a frustrating time-sink to the already tough platforming, making several puzzles quite annoying.

The combat in Neversong is fine. A simple hack ‘n’ slash, Neversong has you use your trusty baseball bat to fight through bug-like creatures with a single-button-press attack. Hit detection can sometimes give issues, where you’ll accidentally run face-first into a damaging blow, rather than striking true. The movement seems to take precedence over your attack, which may be the cause of this slight hiccup, but it’s nothing that can’t be learned. Beating these enemies drops shiny objects, which when gathered, offer you additional hearts. These hearts don’t go away, so it is important to get as many as possible so that you’re well-prepared for the boss battles, where the puzzle-led combat is much more interesting. Each boss has its own weaknesses and set of actions that must be completed to defeat them, which pairs with the great puzzle design on offer in Neversong.

Puzzles are the best feature of Neversong. From collecting organs to make a soupy medicine to rolling one of your friends in various substances to attract a snake monster, Neversong keeps the variety and difficulty on point. Puzzles mainly take the form of striking a set of light orbs before a timer runs out, usually done through challenging platforming or hidden orbs, where regular progress is stymied for the occasional puzzle to be solved. 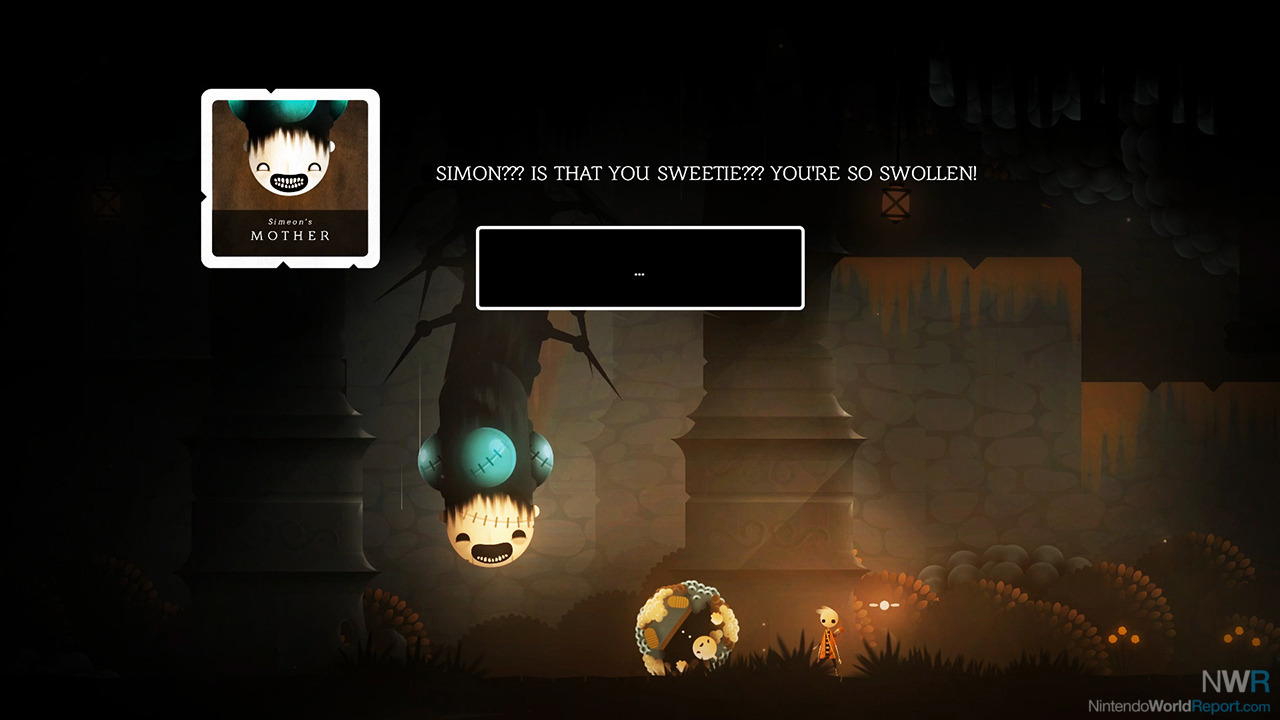 The aesthetic of Neversong is top-notch, with a moody, piano soundtrack, and dark, minimalistic artwork to satiate your sense of sight. The piano becomes a mechanic as well, where learning various note combinations following boss fights lets you unlock the tools needed to get to the next area. Having this level of charm be the outer skin of this deep journey was a pleasure for sure.

Beyond simply progressing through the quest at hand, discoverable cards allow for some rare cosmetics to be added to your character model for some good fun and collectible-hunting goodness. Hidden extremely well at times, the cards do require some extensive searching to find them all, but it is worthwhile as they generally add value to gameplay by offering a difficult puzzle to solve or an elaborate set of platforming jumps in order to collect it.

Neversong is a delightful experience from top to bottom, but it just gets in its own way too many times. From frustrating level design to some hit detection issues in combat, there’s just enough of a lack of polish to be noticeable, but the incredible aesthetic, thought-provoking story and top-notch blend of puzzles and platforming create an experience I would definitely recommend for fans of the genre. It just isn’t necessarily one you need to jump off the couch to pick up.