A well-endowed turn-based RPG with a few tricks up its sleeve.

One of the factors I focus on in reviewing a game like FAIRY TAIL is how well it accommodates players who may not be familiar with the anime series its based on. While those who have read the manga or watched the TV show will undoubtedly enjoy seeing the characters, spells, and locations they know, there’s still a lot of fun to be had for anyone who has never spent any time in the world of Earth Land. Over the top abilities and setpieces mix well with the traditional RPG staples like side-quests (requests), plentiful characters, and environments to explore, even if the pacing is all over the place and the overall variety a little lacking.

After an awkward tutorial portion, the members of the Fairy Tail magicians guild are transported back to Magnolia Town where the primary branch of the guild is located. NPCs around town give you monotonous fetch quests with meager rewards, but you can also find party members stationed throughout the city with whom you can engage in brief story segments so that you can raise their bond level. At the guild building itself, you can talk to an ever-growing menagerie of wizards and magicians, a number of whom will join your party at different points or else offer various services to you. Throughout the game, the different faculties of the guild hall can be added to and expanded on, often through spending jewels, the currency du jour, or collecting specific materials outside of town.

Normally, I would begin by describing the overarching story, but it’s a little fragmented, perhaps as a result of following certain aspects of the manga and anime quite closely, specifically the X791, Grand Magic Games, and Tartaros arcs. There are interludes between the game’s nine total chapters that flesh out the overall plot a little more, but it may be hard to grasp for those who aren’t well-versed in all things Fairy Tail. One clear throughline is the guild attempting to restore itself to prominence, and to that end all of the guild requests and even character-specific ones all build up Fairy Tail’s renown. At certain points in the main story, you are actually forced to help the guild rank up to a certain number, but this serves as a nice break and allows you to learn more about the different characters. 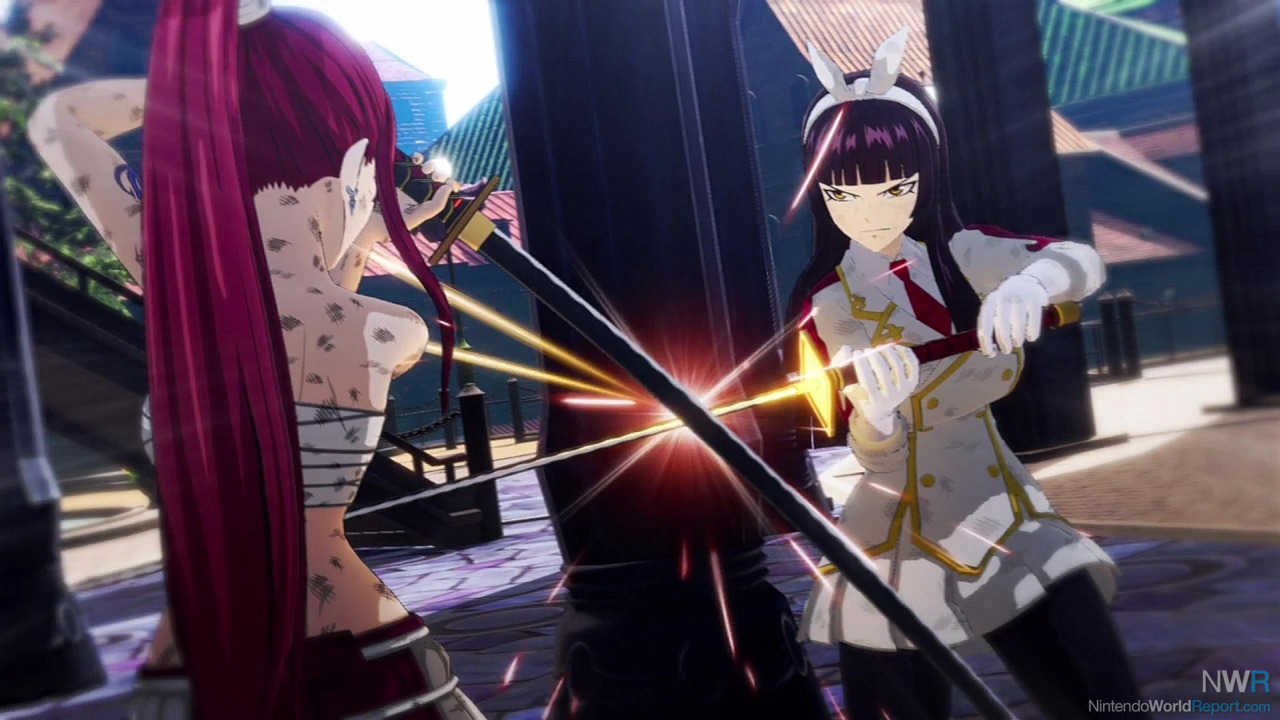 Minute-to-minute gameplay involves exploring new environments to complete requests, advance the story, engage enemies that you see on the screen, or collect materials and treasures. A handful of new areas open up as the narrative plays out, and these will be familiar to fans of the series. From snowy Hakobe Mountain to sunny Akane Beach, there is a fair bit of diversity to the places you visit, even if the same can’t be said for the basic enemies you encounter—and end up fighting over and over again.

At the heart of it all are the characters and their interactions with one another. FAIRY TAIL does an excellent job of bringing multiple party members to the forefront at different times, and the effect of this is that each one feels fleshed out and vital to the team. At times, you are forced to use specific party combinations or to include a specific character or two, but just as often you can switch people in and out at will. Inactive party members gain a percentage of the experience that active ones do, but this number can be raised by building improvements to the guild. New faces to the guild may not join your party until you complete one or more individual missions with them, and while the tasks you perform end up becoming stale, the dialogue with these new recruits helps to make the process more worthwhile. 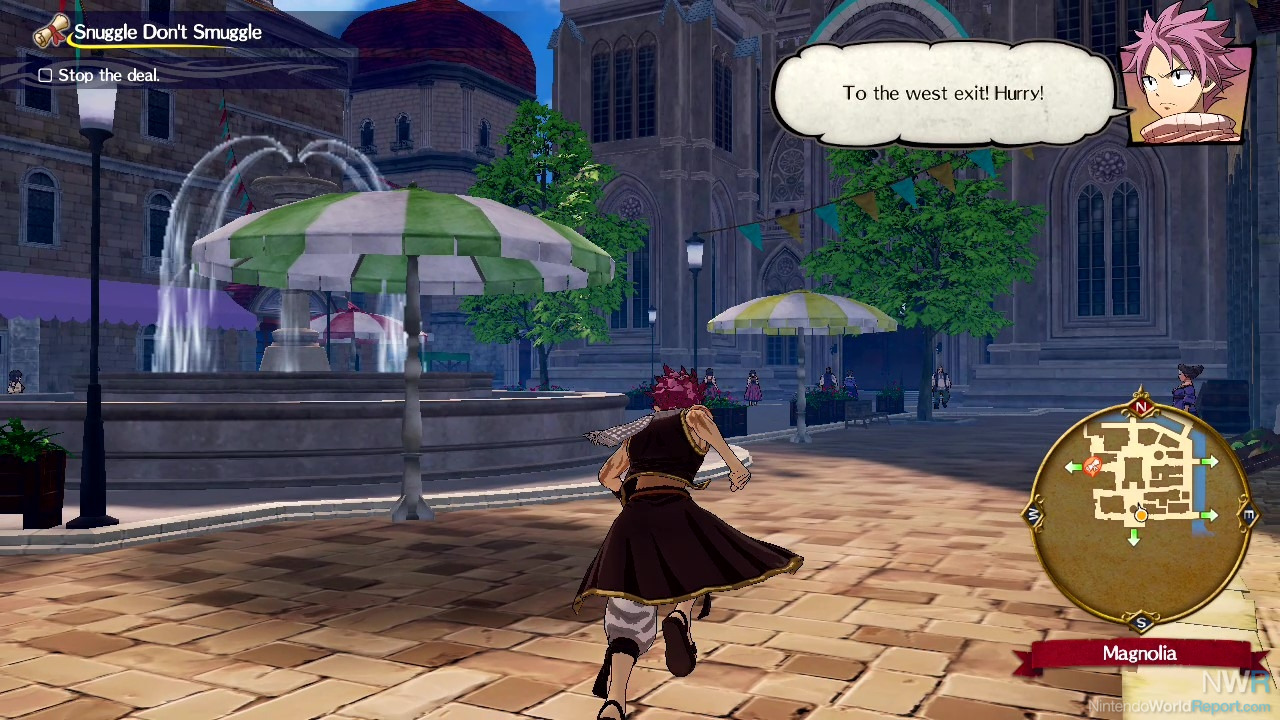 Focusing on the combat, the turn-based battle system may appear traditional and simple, but it has multiple layers that make fights more engaging. Your party can have as many as five people in it, and you face off against enemies that are arranged on a 3x3 grid. You do have a basic attack command, but it’s incredibly weak and basically useless; instead, every character has multiple spells that consume MP and will strike different tiles on the grid. You can even move enemies to different positions with certain attacks. Radiant Historia is a game that comes to mind, but that one focuses even more on repositioning enemies whereas FAIRY TAIL is more about choosing abilities that land on effective tile arrangements, like a “T” shape, an “L” shape, or an “X” shape. In addition to individual meters for each character that fill up and allow them to “awaken” into superior forms, there is also the Fairy Gauge that fills as you land attacks. Once this meter is full, you can activate Magic Chain, a series of combo attacks from all party members. Within the Magic Chain, there are also Unison Raids where powered-up characters perform a special move and Extreme Magic, which sees non-party guild members join in with their own unique magic spells. As far as depth goes, this is one never-ending story.

Clearly, there’s no shortage of depth to the combat. Elemental attributes for each character and spell also come into play, but on Normal difficulty, I have to say the game is fairly easy, aside from a few rare instances. Even longer battles are generally just wars of attrition rather than tense situations requiring specific strategies. That said, the final chapter presents a welcome challenge compared to earlier sections, and it’s worth seeing this one through for some of the satisfying events of the game’s second half. 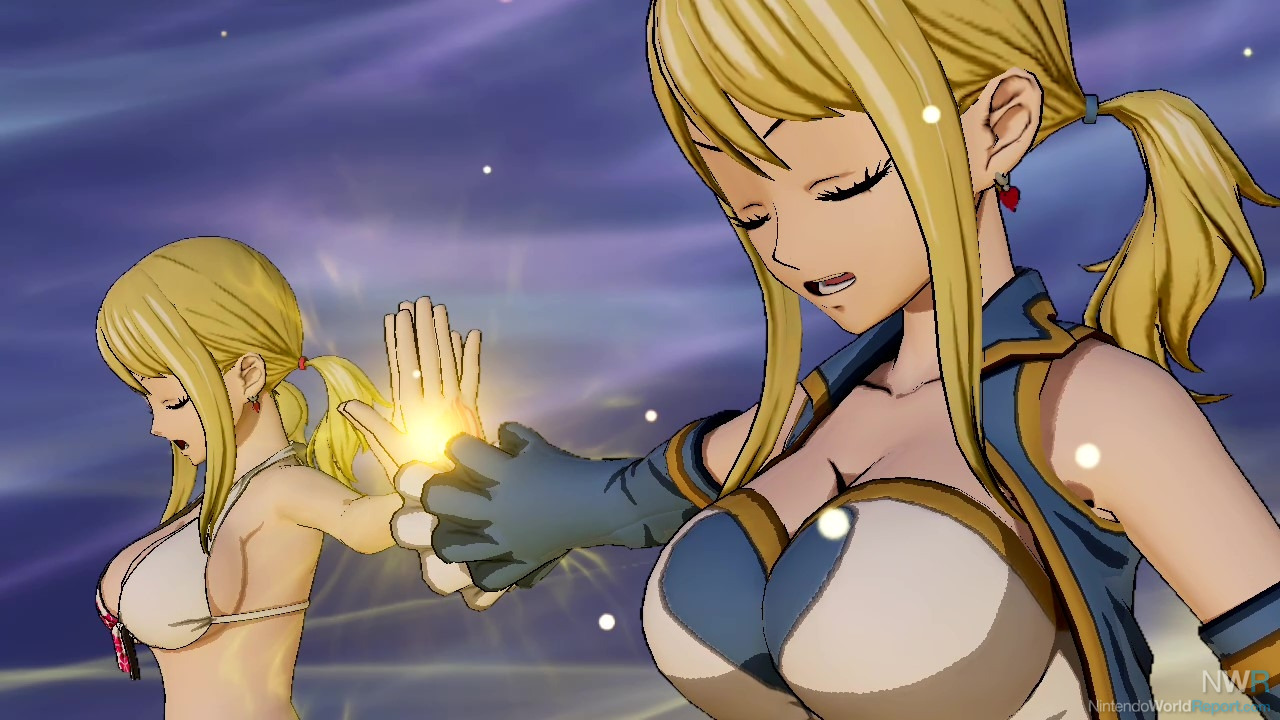 While it’s clear that dragon slayer Natsu and spirit magic user Lucy are the leading characters, so many others get a chance to shine. It’s impressive how well FAIRY TAIL balances the screen time and storylines for its 16 playable characters, even if some join you later in the proceedings. There is no shortage of foes who become friends, and it doesn’t get old seeing the tables turn as your ranks swell with your former enemies as new ones make their appearance. The lack of a consistent villain may impact the overall plot, but the latter chapters and their darker themes are still compelling.

In terms of performance and aesthetics, load times are generally minimal, even when fast travelling between different regions or areas within a city. Framerate seems to be consistent, but the environments don’t always look all that impressive. The city spaces in particular are repetitive and lackluster. On the plus side, many of the spell animations are cool to see, even if some of them drag on a little long. I noticed a number of awkward camera situations where an attack would go off and register damage, but the target of the attack would be off-screen. Other times, the game would cut to an empty room, a bit of dialogue would take place, and then the scene would end. These moments felt out of place. The music is largely pleasant, with a few particularly memorable boss tracks. Unfortunately, there’s no English dub for FAIRY TAIL, but the writing is quite good and seems to capture the spirit of the manga and anime.

FAIRY TAIL’s 15-20 hour adventure doesn’t overstay its welcome, and there’s even more to do if you want to become an S-rank guild or recruit every party member. There’s a surprising depth to the combat, lots of tasks to complete, and some effective story-telling and character building. Without a doubt, fans of the series will enjoy what the game brings to the table, but for the first time, I can say that it’s the video game that has got me more interested in continuing to watch the show. The varying chapter lengths and uneven pacing are noticeable distractions, and there isn’t much depth to the tasks you complete around town or through guild requests. However, these concerns are more than outweighed by the charming and funny characters and all the moments they have together. FAIRY TAIL is an easy recommendation for RPG and anime fans, but those new to either of those groups might just find a true sleeping beauty here.