Smart, intricate card game design makes this hard-as-nails roguelike one worth wading through.

Difficulty in video games can be a tricky needle to thread. A game can be too easy and not feel rewarding, while a barrier for entry could be so high that most who dare to enter will walk away frustrated. The roguelike card game Nowhere Prophet nimbly walks the tightrope of being so difficult it feels impenetrable, but beneath the surface level brutality and constant hard choices lies a nuanced and smart game that assuredly isn’t for everyone. But if you’re interested in learning the deep, dark complexities of a challenging narrative-driven card game, Nowhere Prophet is waiting to fight you. 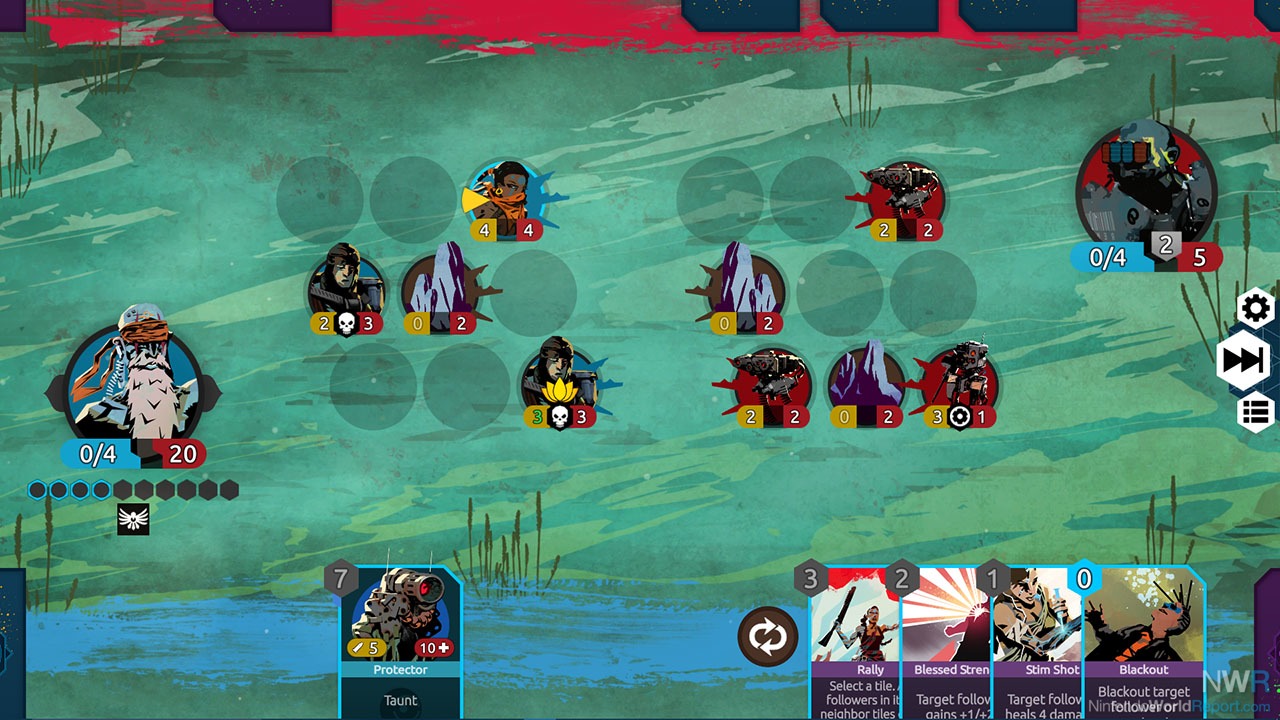 The card game puts you in control of a leader of a convoy trying to find salvation in a wasteland. Basically, you’re Space Moses trying to save your people (credit to NWR Editor Joel DeWitte for that summary). How you do that is by going from point-to-point on a procedurally generated branching map that should immediately call to mind the likes of FTL and Slay the Spire. At each point is an event. Some of them are relatively pedestrian, involving hunting for food or stopping by a shop. Most of them lead to battles, which is the meat and potatoes of Nowhere Prophet.

The basics are reminiscent of Slay the Spire, as you play cards using a limited amount of energy to try to outsmart your opponent and knock their hit points down. You draw from two decks of cards, one representing your leader and the other your followers. Your leader’s deck is generally leaner, with cards that do immediate damage or provide boosts to your followers. The other deck is made up of those followers. They can be placed on a gridded play area where they can then attack enemies, though that in turn opens them up to attack as well. That’s where the tightrope of difficulty comes into play. When a follower is knocked out of a battle, they become wounded. When wounded, followers have one less hit point and one fewer energy cost in the next battle. They also die if they’re knocked out again. Things can go south very fast if you don’t manage things well. Over time, I learned that swapping out my followers to try to have the best team accessible for different battles was the better route to go. A lot of the choices you make regarding your two decks is to make them function as efficiently as possible. Some rounds, I felt like that efficiency was nearly unattainable because of the uphill climb of the difficulty. Other times, things started to synergize into place and the whole game clicked. 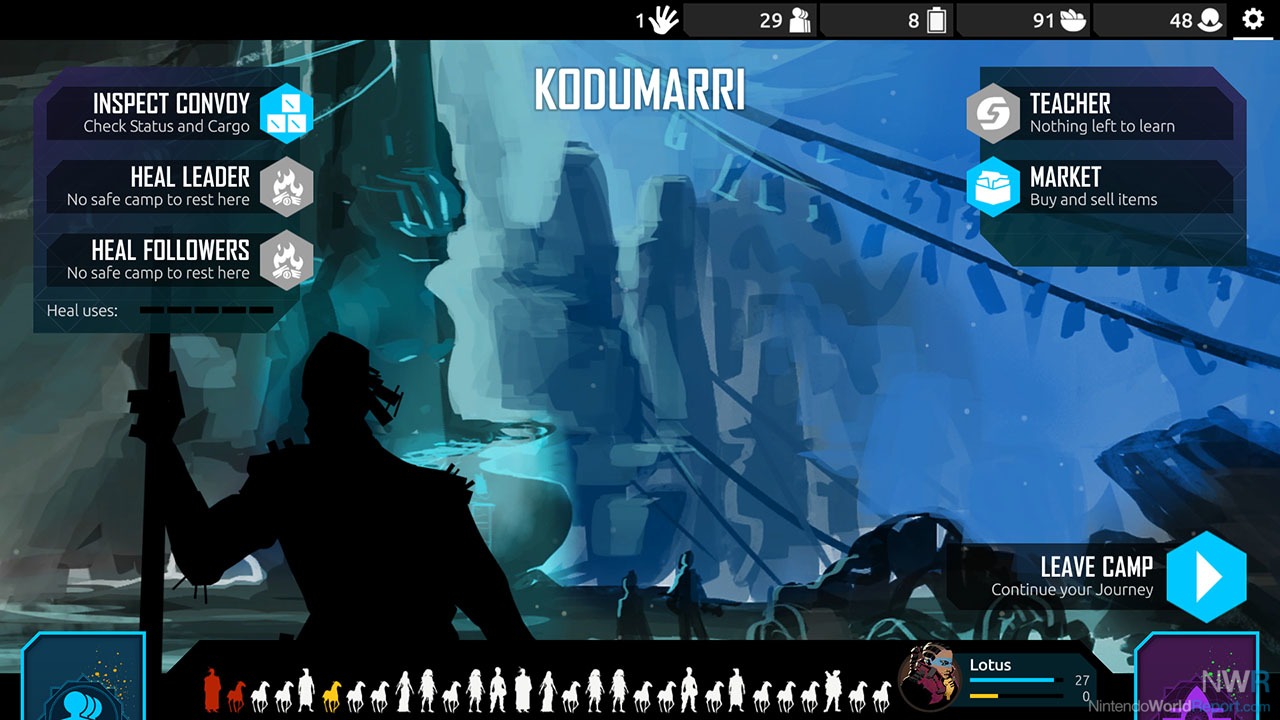 I can’t stress enough how painful this game was to start, though. The tutorial does a decent job of explaining the basics, but it sends you to the wolves in short order without much of a lifeline. An extensive rulebook is included within the game, which can be helpful to answer any specific questions about everything from how healing works to how to smartly level up your leader. That being said, unless Slay the Spire is a baby game to you, Nowhere Prophet will offer a stern challenge upfront.

Take the time to pass through the carnage and you’ll find a wealth of secrets that add a level of mystique to the proceedings. At the core of that are the various follower and leader classes you can unlock. To begin with, you don’t have a choice: there is only one follower convoy and one leader class. In-game hints tease you as to how you can find more choices as you go through your journeys. Some of them are a little on the obtuse side, but it provides an alternative sense of progression if you’re getting your butt kicked. Additionally, the choice between 10 convoys and six classes adds up to a lot of customization and choice in how you play. 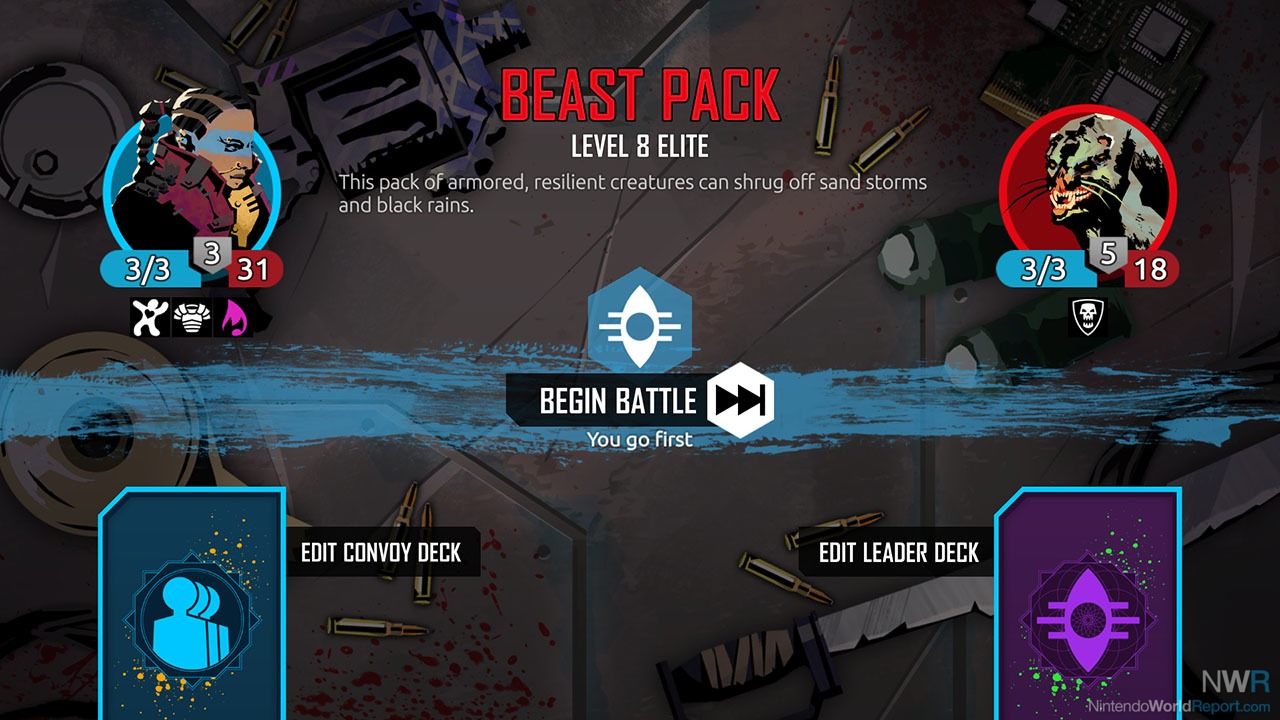 In addition to the main campaign, which comes in three difficulty levels that could be dubbed hard, harder, and hardest, you can also choose the Daily Challenge and Custom Game modes. Custom Game serves as something in the vein of an easy mode, as you can select up to four modifiers, most of which are helpful boosts that give your more supplies or prevent followers from getting wounded. It’s worth noting that Custom Game is only unlocked after you play the campaign three times. You don’t have to beat it; you just need to see an ending screen. This mode, which was a later addition to the initial PC release, might dull some of the sharp edges of the design, but it’s a great way to mess around with the game without the ever-present brutality of the regular campaign.

Nowhere Prophet is still not an entry-level video game. Until you learn how to play it smartly and efficiently - which could take a lot of trial and error - you will see a lot of death. It’s unforgiving and terse, but in that challenge lies a deep and layered roguelike card game. Not everyone is going to make it out of the wasteland alive, but a few of us will guide our Space Moses character to victory.