When all else fails, it’s just another day.

The affairs of state have been settled, King Erik’s lineage secured, and his family remains mostly intact, but I still feel exhausted. I’ve just seen my “ending” in Yes, Your Grace and despite achieving what seems an overall positive result, I can’t escape this unsatisfied feeling. Living life as King Erik of Darven has been ten harrowing hours. 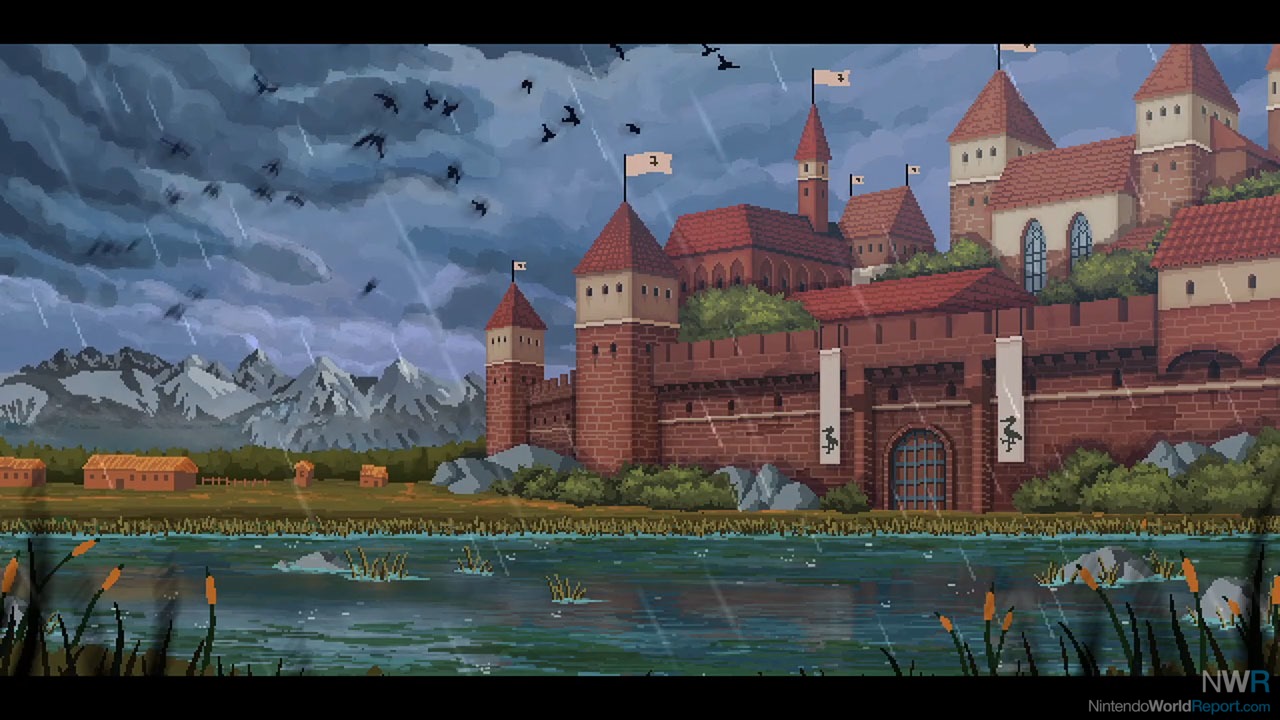 Darven is a frayed kingdom: impoverished, dreary, falling apart, and without an heir. Its king is tired. Ruling a fading kingdom while also being father to three troublesome daughters and husband to a frustrated queen has taken its toll. Yes, Your Grace asks you to respond to the challenges before our graying king while also responding to a new threat of invasion and the lingering curse of a witch. Darven must find allies, rebuild its walls, enhance its food supply, and staff its army, all before the enemy arrives. Erik must sort his family, and prepare for their future.

Each “turn” is a week, and each week begins with setting the budget. Here, major construction efforts can be financed and ministers “hired” for the week. These investments determine the state of the treasury. The damaged market needs gold in order to fix the leaking roof; failing to do so will cause some supplies to spoil each week. No supplies means no soldiers. These investments are the most impactful decisions with respect to the health of the kingdom. Deciding what staff to have on hand each week determines what tasks can be successfully completed. Investing supplies determines if your army is growing or shrinking. However, once the major infrastructure investments are done, this screen often just gets bypassed altogether. 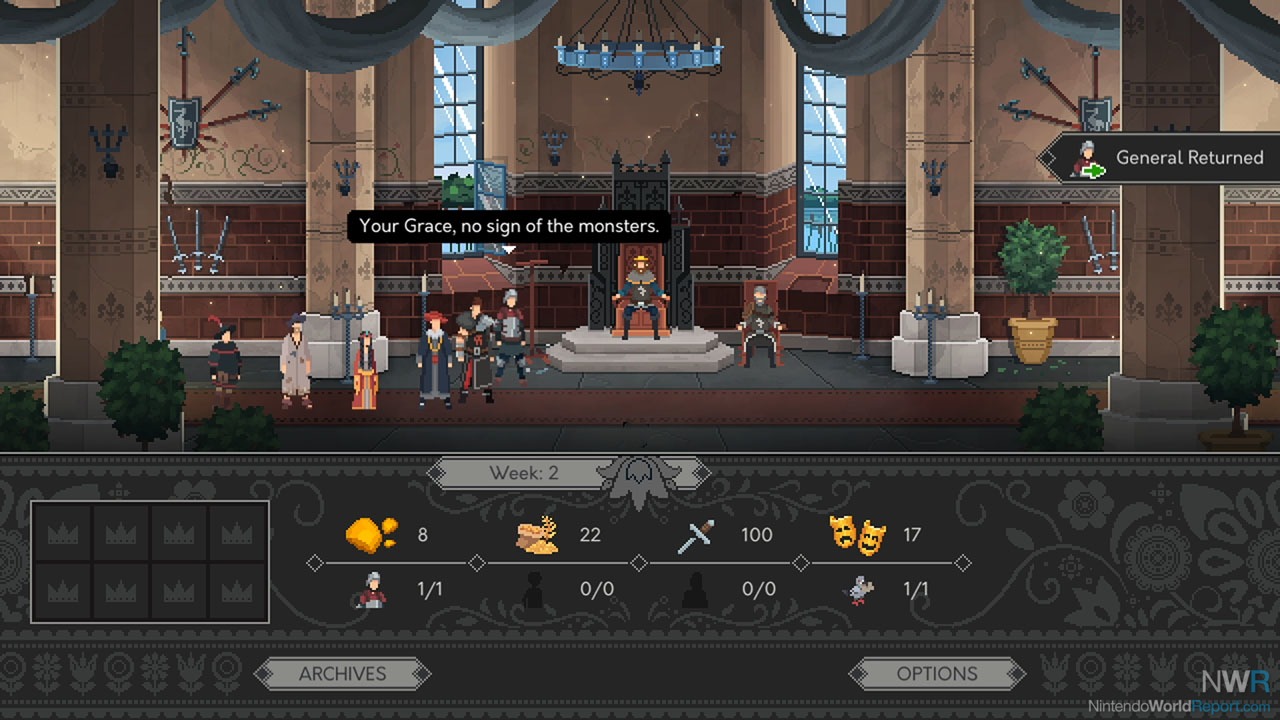 The next step in King Erik’s week is in the audience chamber, where citizens of the kingdom will beseech the king to assist them with their concerns. These could be anything from a plague impacting the village to an overly-baudy bar being a nuisance. It’s up to the player to decide if and how the king will assist: provide gold, food, or the use of one of his ministers. Often these citizens will visit multiple times over the course of the game, forming a quest line. The choices the king makes will create branching paths or cut them off all together.

These audiences are the bulk of each week’s action, but decisions lack the necessary gravitas, as the game autosaves between weeks. If limited resources or personnel are appropriated in a way that turns out to be sub-optimal it is easy enough to reload the week and do it again. A lot of decisions that are meant to seem risky, such as deciding to open a cursed box that legend says kills all who open it, can easily be explored and undone at a whim. Late in the game, I found I was basically treating each week as a dress rehearsal, removing much of the drama in a game about making decisions. Obviously, long-term decisions are not so easily reversed, and multi-part quest lines can’t be quickly undone, but I had no concern about going backwards three or four weeks if it seemed necessary. This kills the flow and tension of the game, but I felt no reason to not.

Lastly, the king has free reign to explore his castle and speak with members of his family. Here the game’s charms are on full display. The royal family feels relatable, despite their unrelatable circumstances. The oldest daughter is depressed that she’s about to be married off, confronting all the fears of leaving home and becoming an adult. The prank-playing middle daughter is constantly clashing with her proper mother and older sister, but deep down is worried for her own future. The strange animal-obsessed youngest daughter steals the show with an earnest sincerity, unqualified courage, and comedic world view (such as her pet porcupine named “THE STABBER;” please note the capitalization) that are only possible in youth. Cedani is my slightly unsettling daughter, and she must be protected at all costs. Even the “proper” and mature queen is racked with guilt that she’s been unable to conceive an heir and stressed by her daughters’ unbecoming behavior. The king himself is tired, proud, and above all concerned for his family. The family drama feels human, their shared apprehension understandable, and the love genuine. 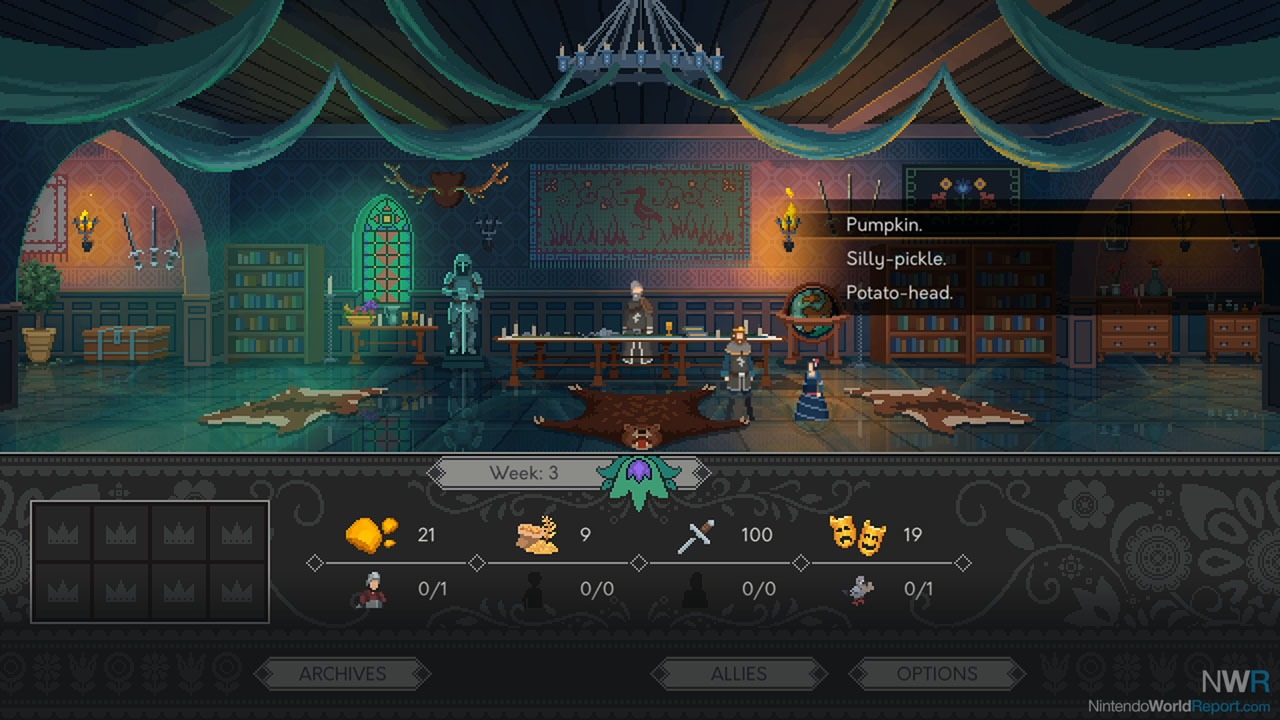 This game shows well. The art, while not mind blowing, is colorful, sharp, and matches the plot. The character designs are unique and fitting. Moments of action or engaging art stand out, particularly once war finally arrives. The music fits the game, and each character’s theme reinforces who they are. Princess Cedani’s slightly menacing theme stands out both for its complexity and how it reinforces the ominous honesty that this small child exudes.

I felt a strong investment in the fate of the king’s family, but much less in the fate of the kingdom. The entire back third of the game became fairly monotonous as the major decisions that set the path of the kingdom had already been made. I found the branching paths, and seeing how they impacted the fate of my family, satisfying. But, the game itself is still very dark. Even success, presumably as successful as possible, still felt somber. The story has a number of twists, some of which hit to great effect, but they’re spread out with long periods of low action. That means the ultimate payoffs often feel distant, and the game is forced to spend time reminding you the bad guy is “bad.” A more compact game wouldn’t have required such reminders.

As a note, I played the game just before release, and encountered a bunch of weird presentation bugs. Characters or menus would have the wrong text, at one point I broke the week counter, and the king could walk out of world and effectively break the game. A patch seems to have fixed these bugs, although I played most of the game without it. Following the patch I experienced new issues, namely a couple of game crashes, but I didn’t spend a lot of time with the game post-patch. Again, they didn’t happen frequently, but they were new post-patch. As such, I can’t say the current state of the game is particularly buggy, but at launch it definitely had some weird issues.

I like Yes, Your Grace, but my enjoyment wasn’t unqualified. I felt the most affinity for the characters, and much less for the overall gameplay. Interacting with my citizens got monotonous at times, and long stretches where my family had no new interactions really took the wind out of my sails. A more compressed story with a shorter runtime would make me more inclined to explore alternate paths, or at least less inclined to “save scum” my way to good outcomes, but given the structure of the game I find it highly unlikely I go back to it. This game won't appeal to everyone, so if you’re the kind of person who really wants to explain to your wife why you let your youngest daughter keep a pet bear before then updating her on your progress with arcane rituals, then this is probably the only game that will scratch that particular itch. If you don’t care for adventure games or this kind of narrative-focused gameplay, then there isn’t much to recommend here.