More like Blair Switch, am I right? I’ll be here all week!

1999’s The Blair Witch Project is probably among the most influential horror films ever made, pioneering the “found footage” genre and freaking a ton of teenagers out when they thought it might be real. Since the film’s successful release, it has spawned multiple sequels, books, TV shows, and of course video games. The latest product based on the iconic IP is that of Layers of Fear developer Bloober Team. Simply titled Blair Witch, it is a first-person horror adventure game that originally released on other platforms in 2019 and has just recently landed on the Switch. Does Bloober Team’s effort match up with the large shoes they’re hoping to fill? Unfortunately, even aside from the Switch version’s specific issues, I really don’t think so. 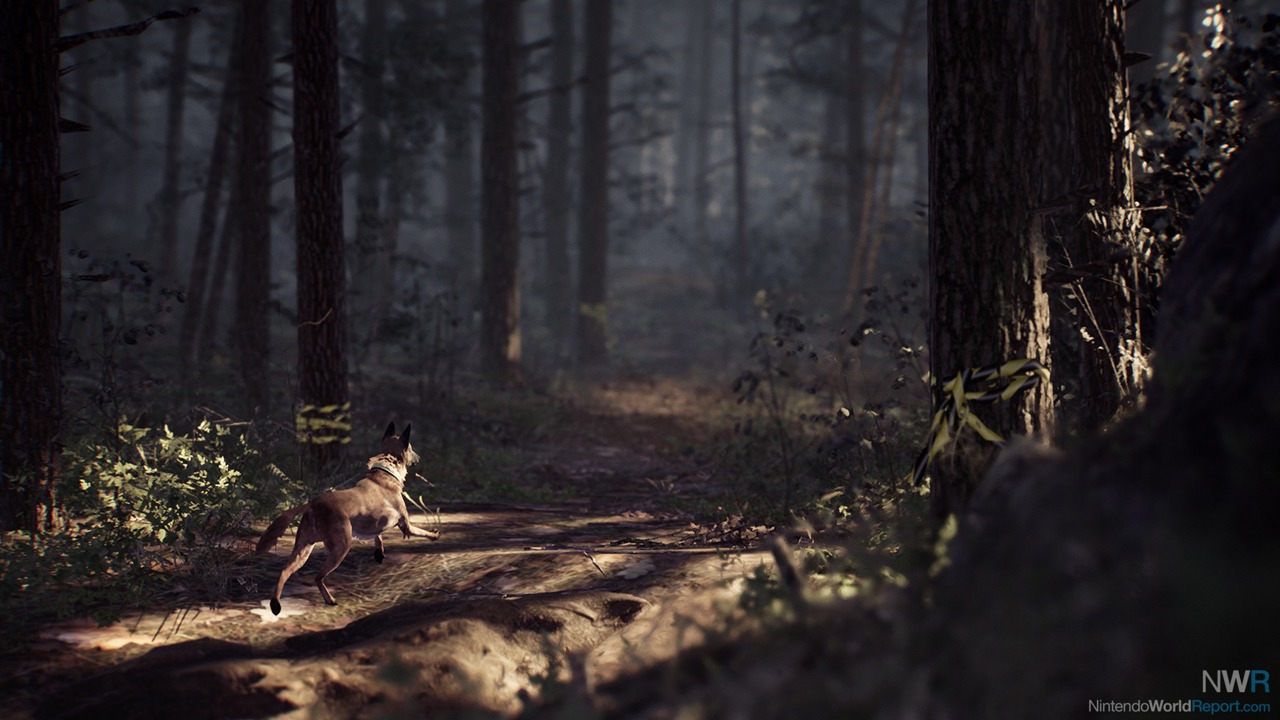 In Blair Witch, the player takes control of Ellis, a man who is on his way to join a search party in the forest outside of Burkittsville two years after the events of the original film. A child named Peter Shannon has gone missing and Ellis believes that with the help of his dog Bullet the search will have a much better chance of successfully finding him. Those around Ellis appear to think it might not be the best idea for him to be out there, however, with many of them making reference to something in Ellis’s past that Peter may have some connection to. Regardless of their worries, Ellis and Bullet venture out into the forest, and once the sun goes down he witnesses first hand why the locals have so many superstitions surrounding said forest.

My main issue with Blair Witch is that overall, it’s just kind of boring. A large chunk of the game is simply wandering around in the woods. If you feel lost you can order Bullet to sniff around the area, which will usually cause him to lead you where the game actually wants you to be, but sometimes it also just leads to nothing. Bullet will lead you to items and clues in the world when they’re around, but at least a few times I had to reload my save because he would stand on top of the item I was supposed to be looking at, and therefore the game seemingly would not let me look at it at the same time. Other than that, the game seemingly expects you to just sort of wander in order to figure out where to go to trigger the next event in a forest that, like a real forest, looks largely the same no matter where you go. There are a few noticeable landmarks, such as a very unique tree, but otherwise it’s just a forest. I know that wandering around in the woods is one of the core parts of Blair Witch, but I don’t think it translates very well into exciting or even creepy gameplay.

There are interesting mechanics to be found in Blair Witch, though. Throughout the game, Ellis will receive texts or calls on his cell phone, sometimes providing hints but more often revealing more about Ellis and his past. He’ll also occasionally be contacted via radio by the rest of the search party, and the player can choose to respond to them or not, and what you decide will alter how some events later in the game play out. Eventually you’ll be given a camcorder, and from then on you will be able to find one of two types of video tape: blue tapes are just tapes that you watch to flesh out the story of what’s going on in these woods, while red tapes are vastly more interesting. Watching a red tape will alter the world around you in a specific way, for instance if there is a fallen tree in your way and you find a tape of the tree falling, pausing that tape before the tree falls will cause that tree to once again be standing. These tape puzzles are neat and the closest Blair Witch really got to fully capturing my interest.

In terms of how the Switch version itself stacks up, the graphical downgrade is unfortunately quite noticeable. Plants and leaves pop in to view ten feet in front of the player and overall texture quality has taken a huge hit, with some objects looking almost like they just walked out of a game on the PlayStation 2. This is unfortunate as it really detracts from one of the good things about walking around in a forest: the fact that forests are usually a rather nice looking place to be. Items that you can examine seem to be especially bad, with some notes being completely unreadable without the option to display the contents in plain text.

More than anything, the biggest disappointment with Blair Witch is that it somehow feels more like a game that had been made before having the IP applied to it. In the end, the story ends up being incredibly cliche and uninteresting, the setting is not all that fun or even all that frightening to walk around in, and the graphical downgrade is just another unfortunate brick in the wall that kept me from really enjoying my time with the game. If these things don’t sound like deal breakers to you, Blair Witch may still be worth your time to at least try out. Even then I don’t think I’d recommend the Switch be where you do so.