Not good now, but maybe later.

I got the review codes for Outbuddies DX and Ruiner at the same time. Never did I think that I’d wind up loving the isometric shooter and despising the Metroid-like. Outbuddies DX is the kind of game that you dread playing more of, and it’s also not the kind of game you can write a fun review of afterward, like Liberated. This is going to be a short review, kids. Right at the top, I’ll give you my recommendation: don’t bother.

In Outbuddies DX, you play as a scientist in a dive suit and his hovering robotic friend, who I'll call "Buddy." Your goal is to explore a massive subterranean area that is nonlinear in the traditional Metroid way, where finding new weapons or movement abilities allows you to explore more areas, with a healthy amount of backtracking. I found the game’s art design ugly, with bubble-covered tilesets that don’t always accurately reflect the boundaries of the area, and enemies that seem to be missing several frames of animation. Background objects will occasionally pepper a given room, but they're often awkwardly juxtaposed with "foreground" elements. Your initial moveset involves jumping, dodge rolling, shooting your ray gun, and running. You’re given some limited tutorials, and they’re communicated via little gifs that, while clever, are not immediately appreciable. You know what I’d prefer over cleverness? Clarity. You’ll also quickly learn how to pilot Buddy, which is awkward. 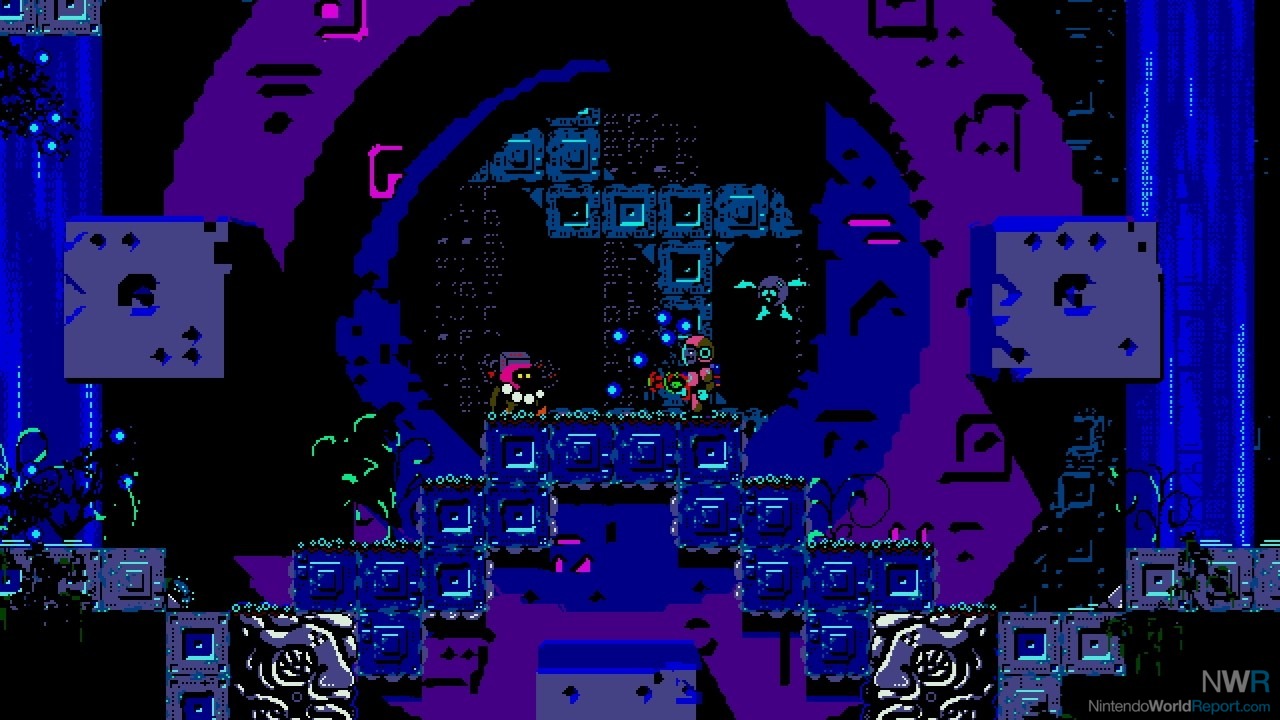 Buddy can be controlled by you or by a couch co-op friend. It can use a tractor beam to drag certain objects around, although it is finicky and frustrating to use, occasionally demanding some level of precision. It can scan walls to look for breakable tiles, but it can also scan enemies and environmental objects and give you icons that are sometimes self-explanatory, but other times, aren't. Sometimes it will show you a switch that isn't actually there. Within the first hour or so (assuming you’ve found three items), Buddy will be able to “hack” enemies. Remember the hacking gun in Axiom Verge? It’s kind of like that, except poorly done. Since Buddy can float around an area without taking damage, he could easily hack enemies by hovering over them and pressing a button. But no, he has to charge up a “seed,” and then slingshot that “seed” towards the enemy he wants to hack. And while every enemy type could be hacked in Axiom Verge to different effect, that’s not the case here. Instead, rather than limit hacking to specific enemy types, certain individual enemies can or can't be hacked in a given room. What this means is that you may have been able to hack a school of piranha fish in one area, this other identical school of fish in a different area cannot be hacked. There is no consistency, which means that you wind up having to scan every enemy in a given room every time.

What I just described for Buddy, where nothing is intuitive or user-friendly, is a philosophy that extends to the entire game. For another example, the subscreens are almost completely useless. The map is an unhelpful parody of a map you’d find in literally any other Metroid-like: rooms have checkmarks that look like “down” symbols and sideways “Ps” that are missing a critical pixel to indicate that one or more items were found in that room. Neither of these symbols hover over the spot where that object was found (the map's rooms are too small), but rather to the side of the room, which means they often hover over doorways, which doesn’t even make sense. You can’t zoom in on the map. You have a minimap on the top right of your screen during gameplay, but it has absolutely nothing to do with the room’s actual layout, and it uses icons that I can’t figure out. Your other sunscreen options are looking at icons of your suit upgrades and the weapons you have, but there is no text or explanations. If you forget how to do something, you could look a the game's Wiki but it's nonfunctional. You can also activate co-op, which you shouldn’t force upon your friends.

Gameplay is tediously slow, especially when you consider how many rooms are flooded. Combat feels like a chore, as you have few options and lack the mobility of something like Metroid to escape damage or get a better bead on your opponents. Scanning every room with Buddy immediately becomes a living nightmare comparable to surveying every room in Metroid II with the Spider Ball. At one point, I found myself in a large area that I couldn’t get out of, repeatedly going back and forth until I realized I lacked the firepower to beat the boss and the abilities required to escape, so I had to restart the game. Every facet of Outbuddies DX is either too simplistic or more complicated than it needs to be which results in a slow grind that will have you frequently sighing in frustration. In short, it’s just not fun to play. Granted, Metroid-likes are hard to get right, but it's not really the map that's lacking here, it's getting around the map. Interactions with non-player characters (Jawa-like creatures) don't give you the kind of guidance that you might find in something like Cave Story, which is probably Outbuddies DX's closest spiritual cousin.

If you look at the game’s Steam forums, you’ll see that Outbuddies DX is being updated continually (I suspect it was updated at least once since release), so I have some hope that it will, at some point, be a better game. Today, however, is not that day. If you’re itching for a Metroid-like, I did review an excellent one just recently. Without Outbuddies, I feel like the skeleton is there, but the meat needs some more time in the oven.

I'm the developer of Outbuddies and want to comment on some points in this review. I had already discussed some of them with Zachary on Twitter and I also got a lot of good takeaways of what may need iteration for future updates. Anyway, I also feel I need to take a stance and comment on some of the game's core concepts that are dismissed in this review. Outbuddies is a polarizing game with review scores for the Switch ranging from 50 – 95; this is the lowest score a MC-relevant site has ever given to the game though.

Sub-par tutorials: A patch is on the way for the Switch to provide a more hands-on approach to the Buddy controls as well as object-interactions. Possible inputs will now be overlayed in-game to support the tutorial texts. We'll also have an in-game manual to quickly display all possible inputs and provide some orientation what the map symbols mean.

Bad Map: Yeah, the map, my nemesis. I know it is not as good as in other games, but I personally think it still gets the job done. Check marks for each room are displayed in a rasterized way, meaning they'll always appear at a room's top left corner.

CoOp: On CoOp, Buddy will be granted offensive options to support the player and can also build blocks for the player to walk on. This fundamentally changes the way the game can be played, allowing for a huge number of sequence breaks as Buddy can basically design new level structures on the fly. I fell CoOp was not really tested in this review. Few people tried CoOp but I got really positive Feedback from the ones who did.

Slow/ unsatisfying movement and combat: It's a point I cannot really understand myself. There's a run button that allows for very fast movement and there's no stamina limit. You've a steam-powered Dodge-Roll that maintains horizontal control during i-frames, so basically any attack pattern can be dodged. The character feels quite heavy, that's intended as we're talking about a guy in a Steam-powered pressure suit. Underwater movement allows strafing and Steam-dashing, which is essential for having a good experience underwater; we found that Zachary missed the tutorial explaining this, this is also my fault and needs improvement. A huge part of the satisfaction the game provides comes from movement upgrades that allow traversal on a completely different level, but it's a 15-20 hour game, so you'll need to stick with it for a while to have this experience.

Anyway, even the early-game move set can be exploited to have some pretty erratic runs. Here's a video of one of my best players, who also helped to shape the game for the speed runner community: https://www.youtube.com/watch?v=mqspzhvSjOA&t=296s

Way finding is tedious/ too difficult: While the early game is rather linear it becomes an open experience once you reach the central HUB area. There’s always multiple paths to go but all of them are viable options to progress. The teleporter system which got improved for DX and the map design is constructed in loops - no matter where you go you'll always find something. Outbuddies fully commits to non-linearity. The game does no hand-holding when it comes to progression, that's fully intended. There was a point in Zachary's play through where he abandoned the run cuz a boss seemed to take no damage. That's my fault, I had forgotten to implement a pixel shader indicating the damage. It will be fixed soon. I've worked with my Steam community for over 6 months since the PC release to make sure there are no soft-locks in the game, no matter how crazy you sequence-break.

Thank you for your review and our chat, Zachary. I, of course, respect your opinion on the game and you for sure helped me pinpoint some more downfalls I can fix for the future.

Wish you all the best,