Blazing a Trail to RPG Greatness

Once upon a time, we would have considered the Super Nintendo or original PlayStation the undisputed leaders when it comes to RPGs. But it's time to enter a new challenger into contention. The Switch is quickly amassing an incredible collection of RPGs of all kinds, from Skyrim and The Witcher 3 to Final Fantasy 7 and Xenoblade Chronicles. The deluge of excellent titles continues with The Legend of Heroes: Trails of Cold Steel 3, which is part of a series making its debut on a Nintendo platform. For more info about The Legend of Heroes franchise and the various Trails sub-series, you can read my primer here. Blazing a trail on Switch, Cold Steel 3 is an absolute role-playing gem, but it takes a little background reading to make it a masterpiece.

The story follows protagonist Rean Schwarzer as he steps into a new role as professor at the Thors Military Branch Campus after graduating from the Main Campus as a student about a year prior. For Rean, political turmoil and various warring factions are balanced against everyday requests of various citizens and school assignments, making for a well-rounded and unique experience. At only 20 years old, he still has a lot of maturing to do, but his change in character from the first Cold Steel game to this third one is readily apparent. And therein lies one of the few issues with Trails of Cold Steel 3: fully enjoying the experience requires that you at least brush up on the events, characters, and world of the first two games. Fortunately, both the demo and full version of the game include detailed synopses, character profiles, and historical details, all accessible from the main menu. For best results, make it a priority to familiarize yourself with everything Cold Steel before hopping into the third game in earnest. 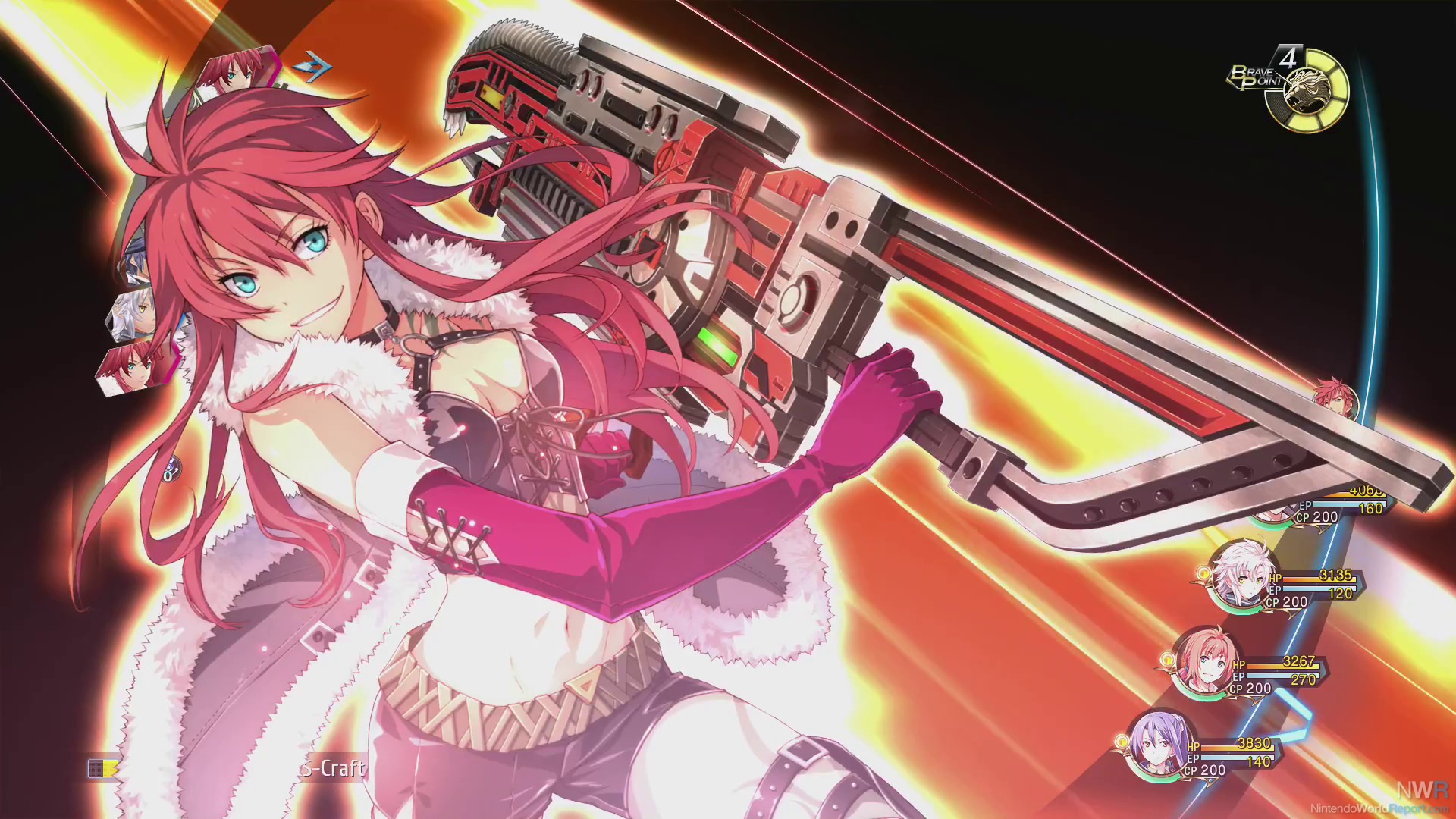 After a tutorial segment, which shows off the battle system and the story elements, Rean meets his fellow instructors, his students, and the surrounding village of Leedes. The sleepy town and nearby campus serve as a charming setting for much of the game, as Rean and his students return here for the first half of every chapter. The second half of each chapter (four in total, plus a prologue and finale) involves a field excursion to another city in the Erebonian Empire, and every new locale has its own personality. The class travels by train to and back from these excursions, and it's very easy to feel engrossed in the story and routine after five to ten hours. If that seems like a lot, fair warning: a regular playthrough of Cold Steel 3 is very likely to take over 40 hours, more if you want to finish the numerous side-quests.

As much as this is a tale of camaraderie and relationships, Rean is at the heart of all of them. He controls a giant mecha known as Valimar, a Divine Knight, who shows up during a handful of special battles over the course of the story. Rean also has special powers that allow him to sense other people, have visions, and enter a super-Saiyan like state during combat. Known as the Ashen Chevalier for his heroics in the battles and events of the previous two games, Rean is revered throughout the country and is viewed with awe and admiration wherever you travel to. His opponents respect him, citizens adore him, and his friends love him (many romantically so). The feeling is infectious, and it's impossible not to connect with Rean as he handles every situation with humility and determination. 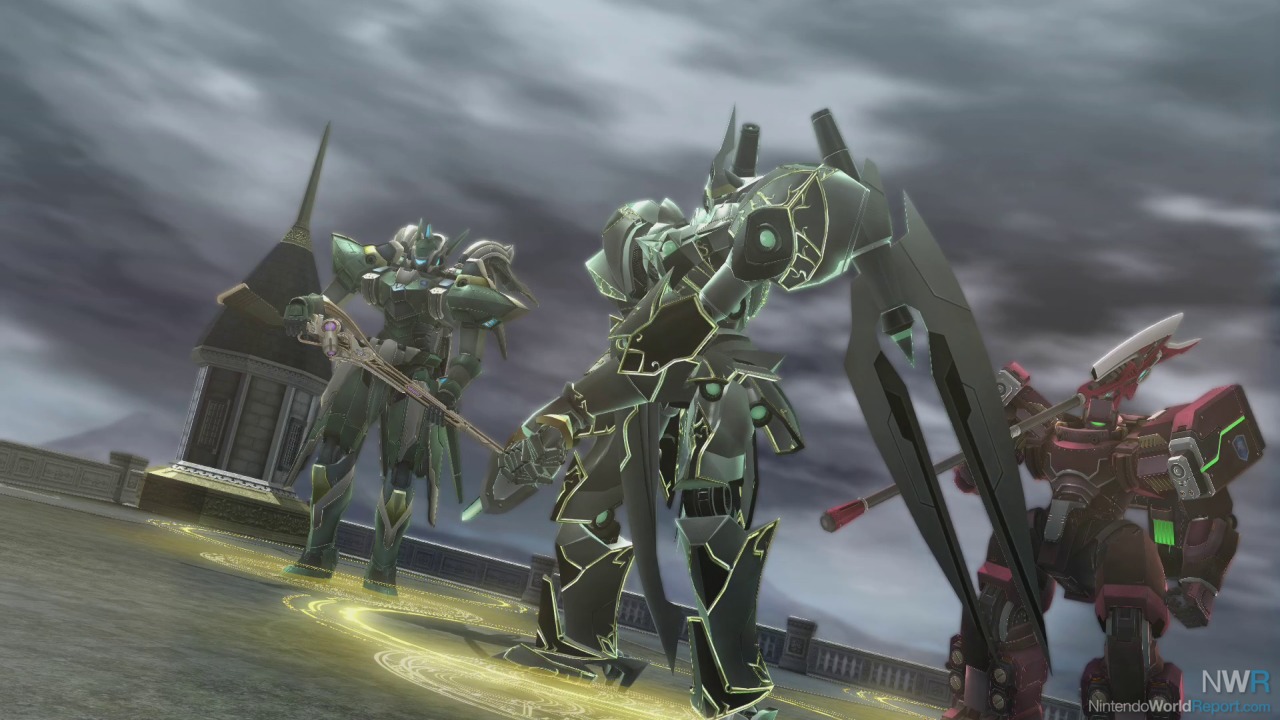 Along the way, the new Class VII that Rean now presides over take on their own personal journeys as each field trip brings them to a familiar or important place. Juna, Kurt, and Altina are initially hesitant to accept the guidance of their instructor, but their reluctance gradually melts away. Every chapter also brings back the original Class VII of Cold Steel 1 and 2, meaning constant class reunions, handshakes, hugs, and more. For those who have played the first two games (available on PlayStation 3, 4, and Vita), running into familiar faces and seeing how far they've come in a short time is rewarding, but even if characters like Alisa and Laura are new to you, their interactions with Rean are still warm and captivating. One of the best parts of Cold Steel 3 is just how many interesting characters you meet along the way.

Even though story and dialogue rule the day, the RPG mechanics and combat system are incredibly deep while also being accessible. The turn-based combat involves positioning characters on the field and activating abilities and attacks that affect allies and enemies within a radius. This means that you have to be aware of your position relative to the enemies, and then act in such a way to maximize the number of targets you hurt or heal. In addition to a basic attack, you have magical abilities called Arts and unique moves called Crafts that build up as you attack and take damage. In the roads and dungeons between towns, you enter combat by running into enemies visible on the screen, so you can choose when and how to grind. There are also treasure chests, fishing spots, and smashable stones that can fill your CP and EP meters (used for Crafts and Arts, respectively). 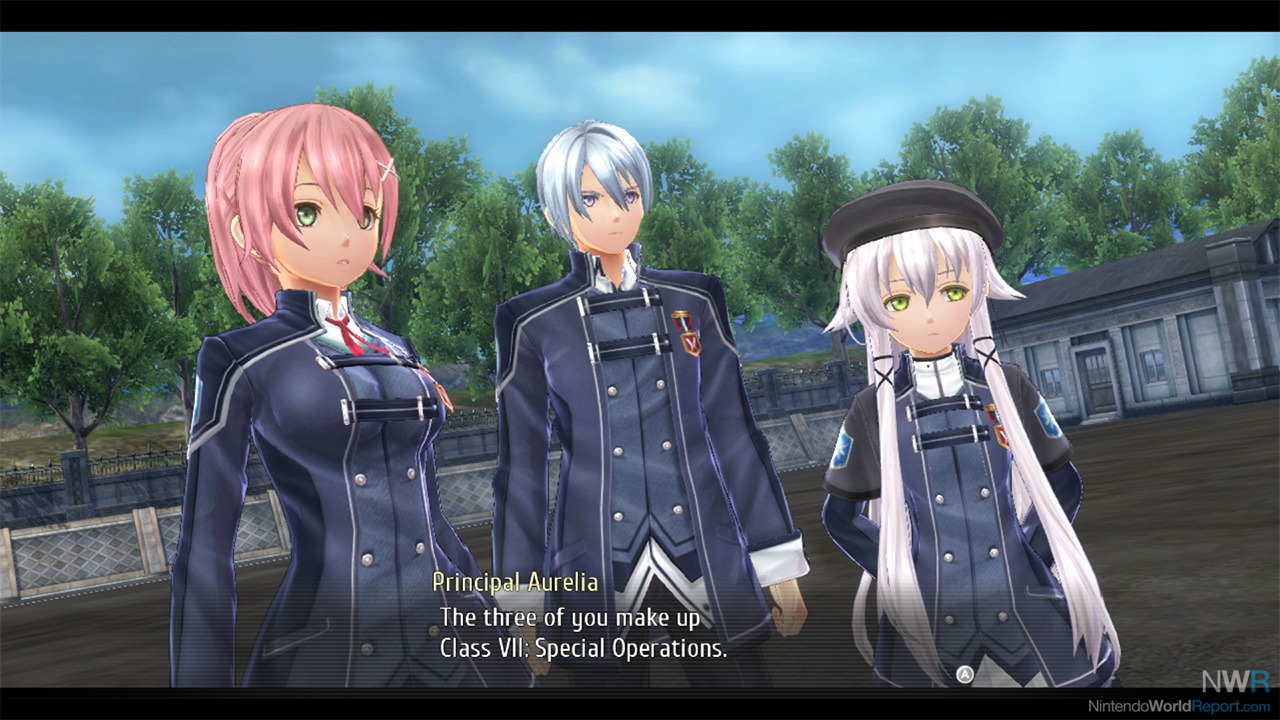 Other battle elements include Combat Links that activate when you strike an enemy's weakpoint and Orders that can boost your four-person party's stats. Links allow characters to perform follow-up attacks and heals, and they also fill up another meter that you spend on Orders. Going into a boss fight with full meters can often be the difference between victory and defeat, so it's worth preparing beforehand. With a choice of five difficulty levels, you can customize the combat experience to your preference, but one really handy feature is that if you fall in battle, you have the option of restarting the fight from the beginning or even weakening the enemies before trying again. Without question, Cold Steel 3 has an in-depth and multi-faceted combat system, but it's also welcoming to new or less seasoned players.

After battles, in addition to experience points for your characters, you also collect sepith crystals that can be used to unlock more ability slots for your characters or craft quartz, objects that function a little like materia from Final Fantasy 7. Quartz are slotted into a device called an ARCUS, and this enables that character to use the associated Orbal Arts or receive specific stat boosts. A separate Master Quartz can also be equipped by each character that levels up and provides additional perks. There are dozens of quartz to find and craft in the game, some of which are incredibly rare and powerful, and they offer a fun way to customize your party. 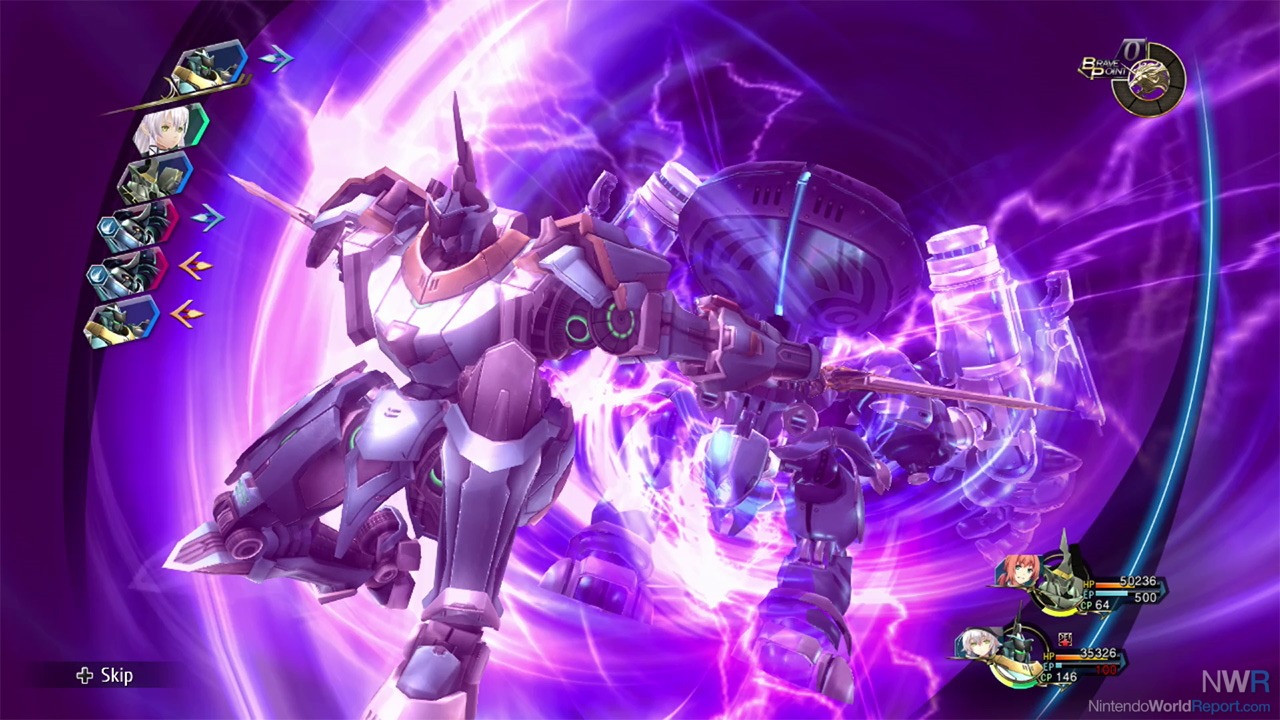 During my 30-plus hours with the game, the performance on Switch held up well. There was a bit of slowdown in some of the larger and busier town areas, but combat and cut-scenes always went off without a hitch. Another annoyance is that I did experience one instance where the game froze on a loading screen while running up the stairs in the campus dorm building and two more issues where the game shut down during the cut-scenes between the second and third chapters and then during a cut-scene in the fourth chapter. Without an auto-save feature, it's important that you save often, and fortunately Cold Steel 3 has over 200 save slots.

Given that the trilogy started during the previous generation, it's not surprising that the graphics here aren't all that impressive. What is, however, is the art style and attention to detail. The buildings in each town have character and it's enjoyable just wandering around, talking to NPCs and searching for and completing side-quests. The soundtrack is understated in terms of volume and emotion, but it lends itself to that sense of immersion in the school life and minute-to-minute adventuring that Rean and his students participate in. The school and city settings, not to mention the relationships between the characters, actually remind me a lot of the Persona series. 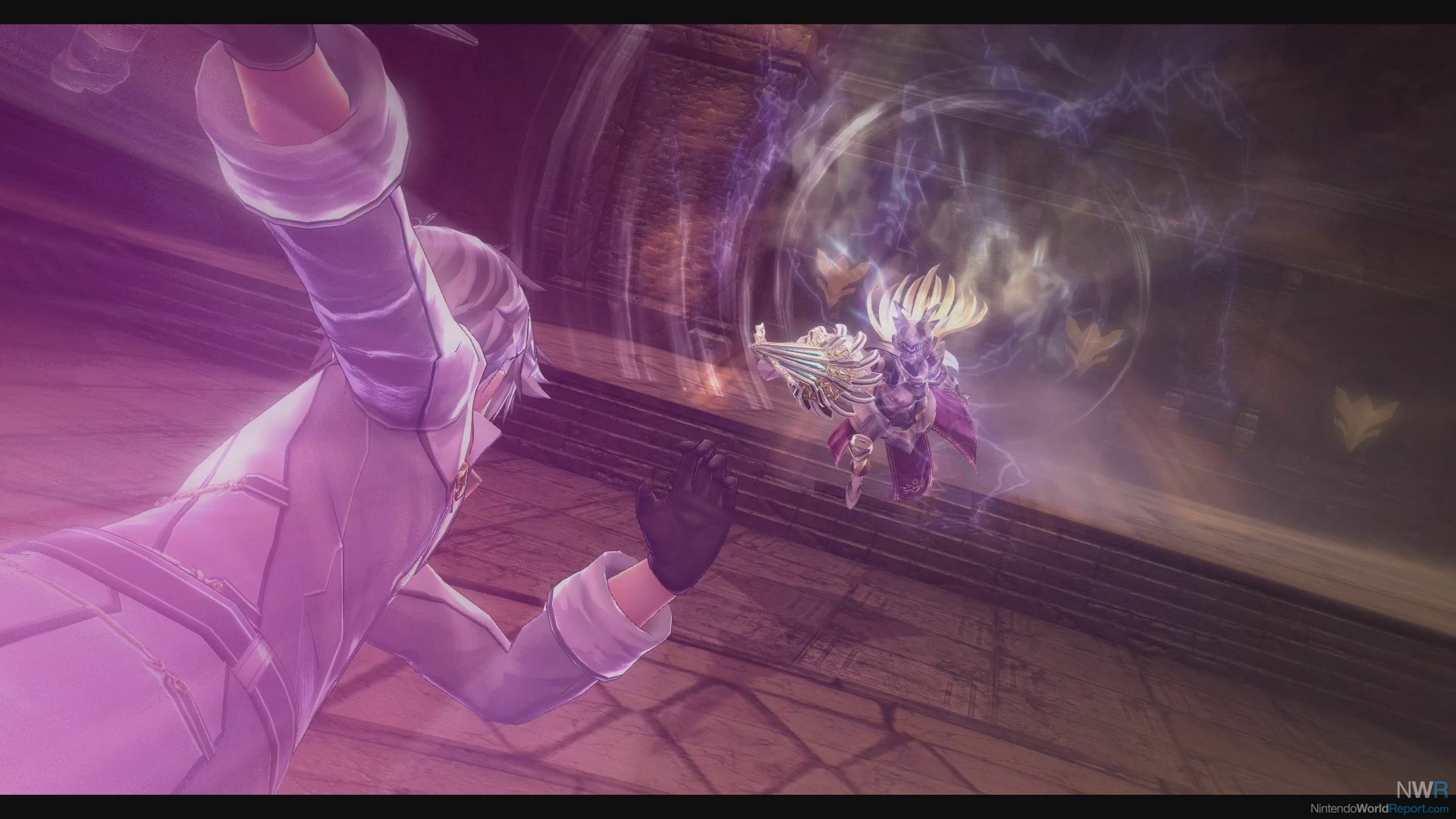 Much of the overall playtime is spent reading dialogue, some of which is voiced. The voice acting is solid throughout, but it can be jarring during a scene when characters around Rean have their lines spoken aloud while Rean remains silent. For those who prefer a more expedited experience, you can skip whole cut-scenes or fast-forward through them. You can bring up past dialogue to review or clarify anything you may have missed or been unclear on. The icing on the cake for someone who likes to sprint through long games, like yours truly, is that a speed-up option can be toggled on and off that pushes the tempo at all times, making exploration and defeating minor enemies a breeze.

A story's length doesn't always reveal how dense it is, but Cold Steel 3 has an incredibly packed and detailed plot. There are dozens of key characters, almost 20 that join your party at some point (some just for a chapter or two), various villains, nefarious schemes, and constant twists and turns. It's not a stretch to think of this game as a true RPG rollercoaster. I would tell you to take notes, but in-game summaries can help you stay on track when it all seems a little (or a lot) convoluted. The final act of the game is particularly memorable.

For those willing to invest in playing through or reading into the first two entries, Trails of Cold Steel 3 is an unmissable experience. RPG fans of all kinds are sure to fall for this love letter to the genre. Meaningful side-quests, an engaging combat system, and a story that makes something amazing out of what could easily be a simple routine: these elements represent only a fraction of Cold Steel 3's achievements. The performance isn't flawless, but portability and lengthy RPGs go hand-in-hand, making this a must-own title on Switch. If you’ve never played a Trails game, this release has everything you need to catch up and dive right in, and stay tuned for the finale of the tetralogy, Trails of Cold Steel 4, coming to Switch in 2021. If two roads diverge in a yellow wood, you better take the trail of cold steel. That will make all the difference.

My speed is becoming legend (of heroes) around here. The truth is a combination of skipping side quests and abusing the 3x speed modifier, among other things.