Sometimes it takes a little time for a game to click, and Ruiner is one of those games for me. Granted, the intro level is too punishing and doesn’t do a good job of introducing you to the gameplay loop: dash around, shoot dudes, dash some more, land some melee kills, dash some more. There are some complications, some alternate weapons, and some environmental hazards, but overall, this game is about shooting a lot of dudes in a stylish manner.

You play as an unnamed, faceless mercenary in an Akira or Ghost in the Shell-type cyberpunk future, out to kill the big boss of the Heaven megacorporation. You go through bounty hunters, security details, cyborgs, and laser-spewing machinery, all in an effort to rescue your brother from Heaven’s clutches. Your base of operations is Rengkok South, where your hacking group sends you on various missions to take out high-level targets. It’s a quick game, with just three major areas (each divided into several sub-levels). Other quests also pop up in Rengkok, like finding and hacking robotic cats or giving collectible coins to a fortune-teller. 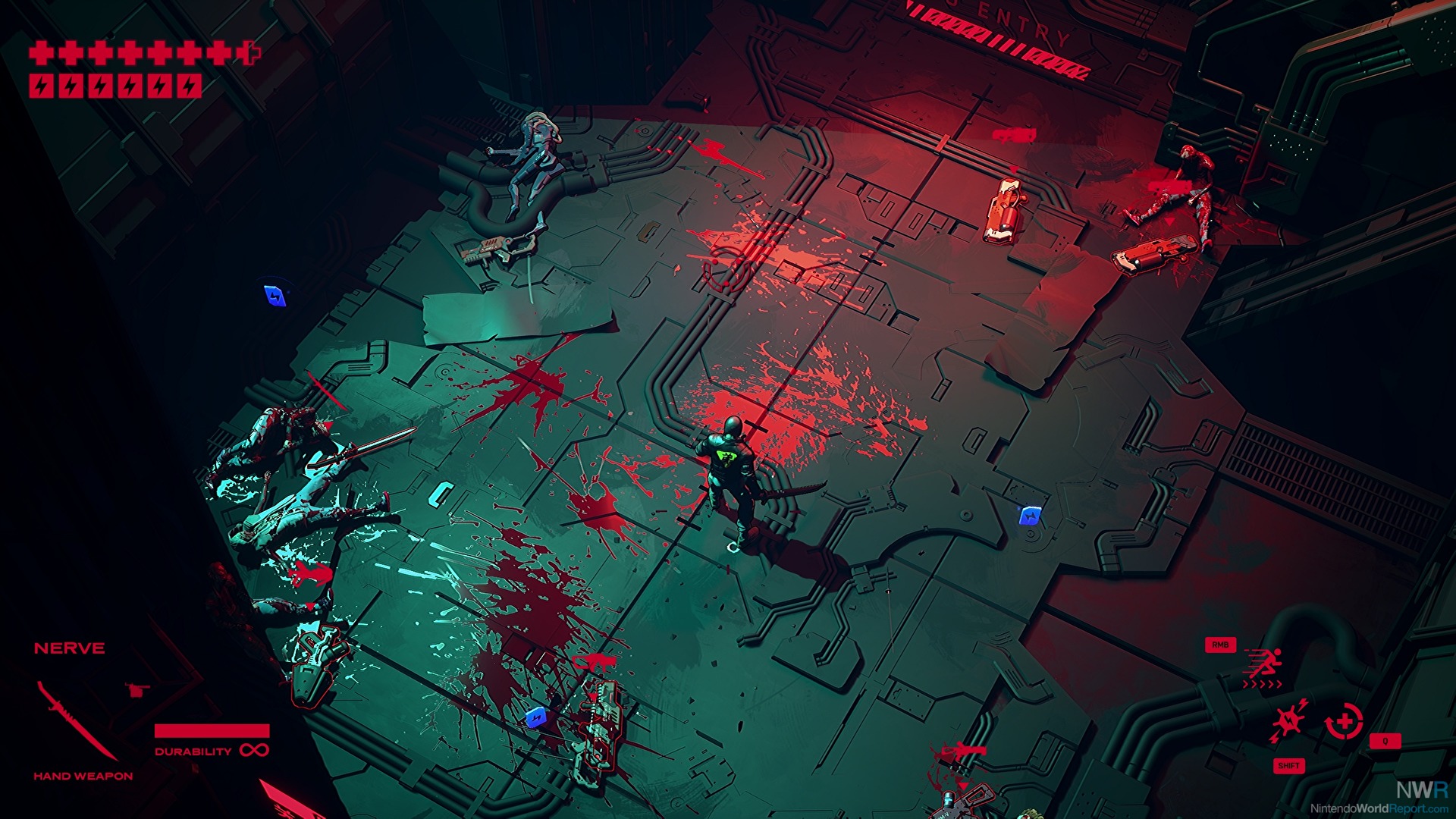 When out on a mission, survival is the name of the game. Our nameless protagonist (nicknamed “Puppy” by his hacker friends) gets by with his Ruiner machine gun and a melee sword, but both can be swapped for weapons found in the field. A LOT of guns can be found with a lot of different effects, and a similar number of blades. Even if you find favorites, guns run out of ammo and blades deteriorate over time, so you’re required to make do with what you find. Puppy’s main abilities are his gun, sword, a recharging dash (you can awkwardly chain several dashes together), and a handy personal shield that cannot be active while Puppy is attacking.

Skill points are earned/found and can be used to upgrade these core abilities as well as unlock and enhance several others, like stun grenades and an immobile energy shield. You can upgrade how Puppy handles his weapons as well as how much health and energy he has. The best part is that you’re never locked to a specific path; if you find you don’t care for the stun grenades, you can get those skill points back and sink them into something else. Experimentation pays off, although I suspect most players will wind up with similar "builds" towards the end.

As I said at the top, Ruiner doesn’t explain itself very well. You should focus on finding a rhythm with dashing forward, landing hits, and dashing away to safety. Use cover whenever possible. Destroying environmental hazards should be your top priority. Stay out of any spotlights! There were plenty of times where I felt like I was being repeatedly trounced by fights I should’ve won quickly, but once I accepted that you can’t really “brute force” this game and submitted to the “dash-attack, dash-away” loop, I had an easier time. The toughest fights are those that involve powerful opponents and two or more hazards to keep track of. Part of the challenge is keeping track of multiple bogeys.

Killing dudes nets you experience (“Karma”), which you can also find by activating Weapon Grinders after every mission (that destroy excess weapons) and in treasure chests. You might also come across random Skill Point pickups and Coins, which you can take to Rengkok’s fortune teller.

My favorite aspect of Ruiner, however, is the wonderfully detailed environments. Puppy explores dilapidated parking structures that give way to abandoned factories, an automated weapons manufacturing plant, and an experimental tech plant that features some disturbing human-tech hybrids. The machine designs and architecture absolutely scream Akira and Ghost in the Shell, with lots of bulky, squared off components of automated machines, enormous umbilical power cords, and character art that’s as freaky as it is beautiful. Despite the game telling you that enemies in THIS sector look different from THAT sector, they very quickly blend together once the bullets start flying. Between firefights, you have plenty of opportunities to stop and gaze at the industrial beauty surrounding you—it seems like the art department had a blast designing these environments.

Ruiner is also quite short, clocking in at about 3.5 hours, although there are a couple extra game modes (including New Game+) if you want to keep the ball rolling. There’s also a good reason to go back through previous levels to get better scores and find loot you’d previously missed or had been locked behind a Rengkok quest.

It’s surprisingly fun. Just don’t play it in Handheld mode, where you’ll be struggling to see things (the Joy-Con sticks aren’t necessarily up to the task, either). I will say there’s a plot twist that could not have been more telegraphed, which was a little disappointing, but this isn’t a game you’re playing for depth of story. Ruiner is a good time and is definitely worth trying.