This tactical strategy game should be seen.

In the fictional year 2074, governmental order has been upended by megacorporations. In response to attacks, Invisible, Inc., the espionage agency under your direction, takes on a series of missions to acquire resources in preparation for a final confrontation with those encroaching forces. As their chief tactician, to achieve this goal will require sending two of your premiere secret agents into various spots on the world map with a limited number of hours before having to deploy for that final mission. 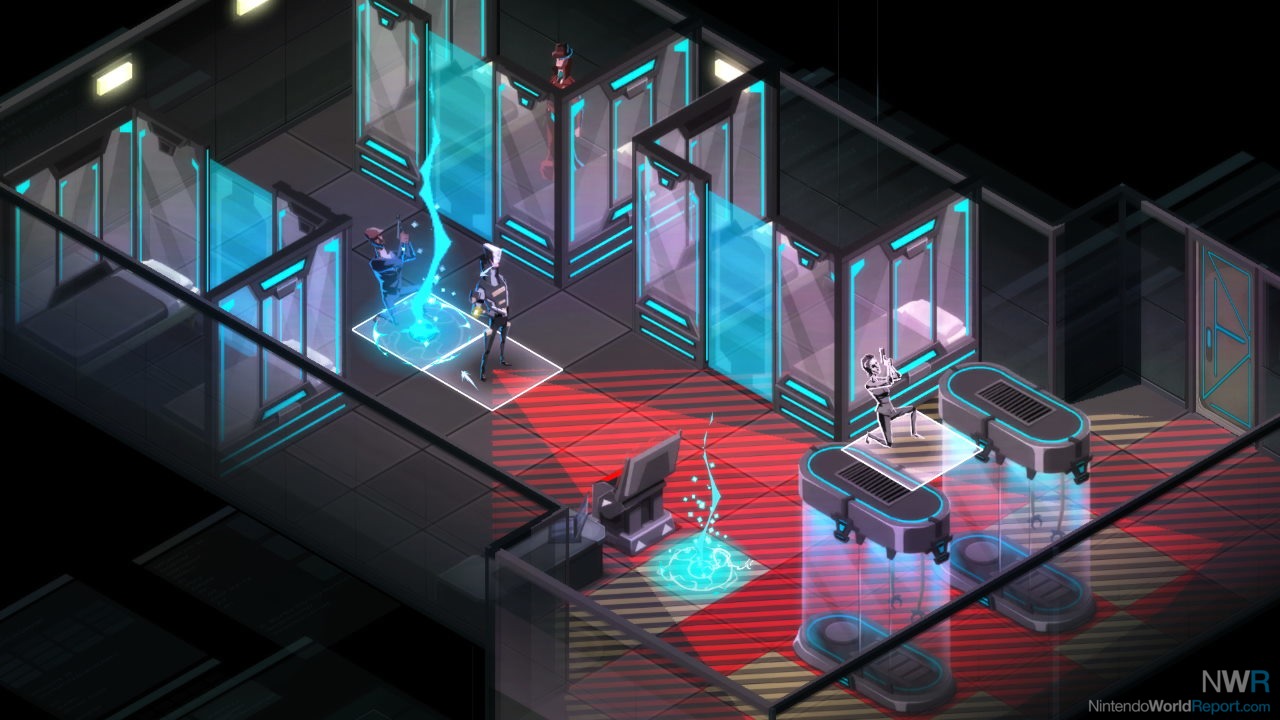 If you’re new to the genre, turn-based tactical strategy games play out in, well, turns. Each agent has action points spendable as a shared resource - either by moving across tile spaces of the level or using character abilities. After ending your turn, the enemy team gets their turn to do the same. Each level has two primary objectives – one example would be accessing a terminal or rescuing an imprisoned agent, and the other objective is to find the escape elevator of the building you’re infiltrating. Scattered throughout are side missions, such as collecting credits via hacking terminals with the assistance of Incognita, the AI assistant who also can reprogram scouting bots, disable laser barriers or surveillance cameras, and other neat tools as long as you have power, a resource that you can gain in-between each turn as well as collect on-site.

An alarm level is displayed in the corner, segmented in five pieces. Each passing turn, if a guard is alerted of your presence, or hacking of a fixture that has daemons (think malware) fills a segment, and once it’s been filled completely, the alarm level increases, bringing with it additional obstacles to navigate such as increased guard presence or re-engaging cameras that were taken out earlier. It creates this great tension knowing that every extra turn taken will result in more danger. Using action points each turn effectively, rationing power to hack terminals via Incognita, and deciding when to engage with enemies versus trying to sneak around them evokes similar feelings I had of Into the Breach. Every choice is important, and ultimately sets the stage for victory, or sets up a trap of your own making. Also like Into the Breach, each round brings a limited-use rewind feature, pulling back one turn in case you’ve realized what a catastrophic mistake was made. 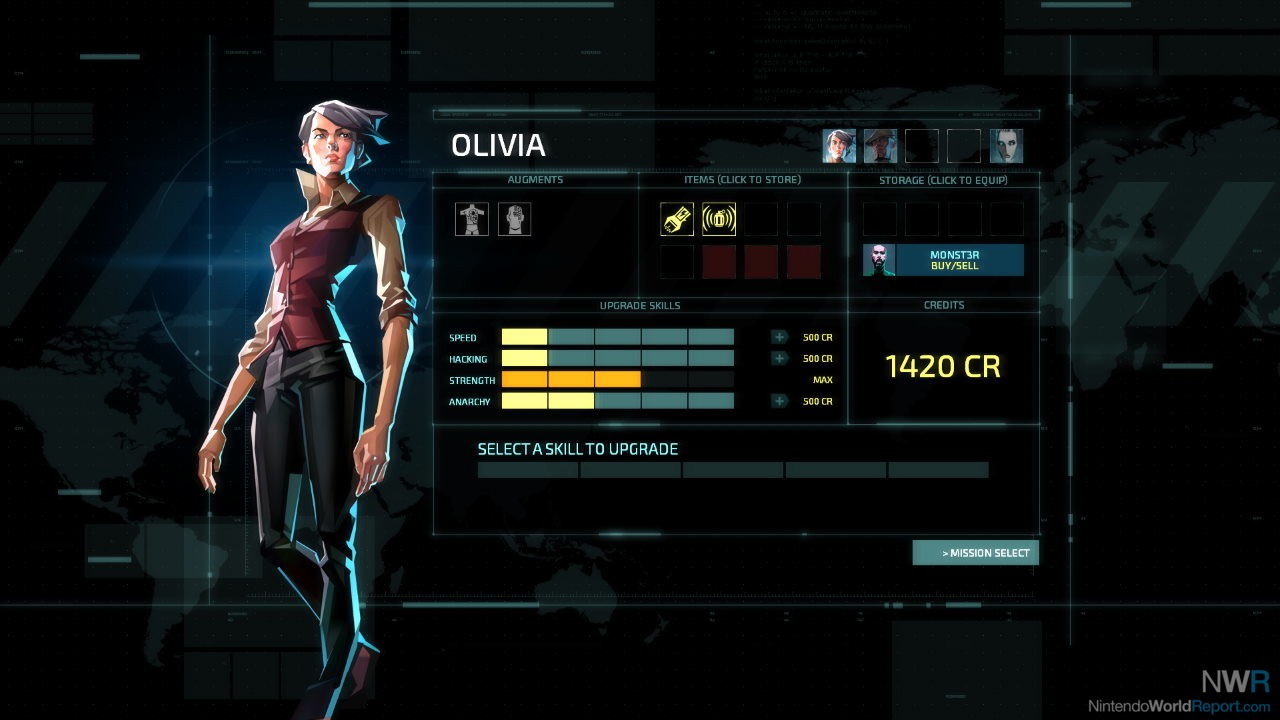 But it’s downplaying the lethal options that allows other features of this genre to shine. Most tactical turn-based games I’ve played have combat as a core function – you don’t want to engage with enemies without a plan, and it’s critical to get the jump on enemies, but often part of the win condition is to lethally remove enemy pieces from the battlefield. In Invisible, Inc., stealth is your north star, with combat meant to disarm, not deal in death. Enemies have a vision cone that stops agents in their tracks if seen. If you’re close enough to a blind spot, an agent can duck under cover and set-up an ambush attack. Using hacking to disable cameras and open new avenues to get around enemy patrols is satisfying. Walking up to a door, using a peek ability to see a patrol across the other room, and gauging whether you have enough action points to disarm and knock them out for a few turns is essential. If your agent is caught with no moves left to make, they can go out like a cool-guy action hero with a quippy last word before being gunned down, left to wither unless another agent can reach and carry them to the end goal.

Between missions, credits you’ve accumulated can be spent to upgrade stat categories that boost things like how an agent’s total action points, amount of items that can be carried, or number of modifiers that can be installed. Additional agents unlock the more you play Invisible, Inc., each with their own unique backgrounds outlined in profiles as well as special attributes to their character. Level structure is randomly generated, which in a lesser game would feel like a lazy way to extend game length. Here, the core gameplay is so structurally sound that it adds just the right amount of variation in each playthrough that can keep it fresh as you try another run with a different set of agents.

All that said, there are a few minor quibbles worth addressing. Firstly, while the premise is well established at the start with well-written dialogue throughout, there isn’t much story being told beyond setting-up that premise. In between missions the same prefabricated back-and forth between the agency head, tech specialist, and Incognita are repeated – which works well enough, but feels perfunctory in a way that made me feel more like I was listening to someone else’s story secondhand rather than it being mine. Also, in a few instances where I got into the fourth or fifth alarm level, there were regular instances of stuttering framerate when the enemy turns initiated. I haven’t played this game on another console or PC, so I can’t tell if it’s Switch specific, but it’s reminiscent of playing a Civilization game in the later hours of a match when your computer is struggling to make the moves of all these pieces of the game board. Maybe something I wouldn’t have noticed if I were a better super-secret spy soldier.

Invisible, Inc., the stealthy turn-based tactics game originally released on PC in 2015, may have suddenly become my favorite release on the Nintendo Switch in 2020. Eschewing direct combat for a nearly purely stealth focus helps simplify without dumbing down the essential structure of what makes this genre great, and the efficiency that it demands for success is challenging but rewarding in ways that make me want to replay it over and over until I’ve scraped all the meat off the bone. If you find the Xcom’s of the world alluring but lament the random percentage chances of success combat that comes along with it, this is the game you’ve been looking for.