On the right track.

Railway Empire is a tycoon simulation game, where you build a railroad network across the United States, connecting cities and industries and making sure your trains are running properly while trying to stave off the competition. This formula may be familiar to some, as it is largely influenced by the Railroad Tycoon series from the 1990s and early 2000s. I’m not your usual reviewer at Nintendo World Report. I was called in to tackle Railway Empire because I am a lifelong rail fan as well as a video game fan. I was curious to see if this new release could scratch my ever-present railroad game itch. Railway Empire was originally released for PC, Xbox One and PlayStation 4 back in 2018. Now it’s out on Switch and overall, I was impressed. 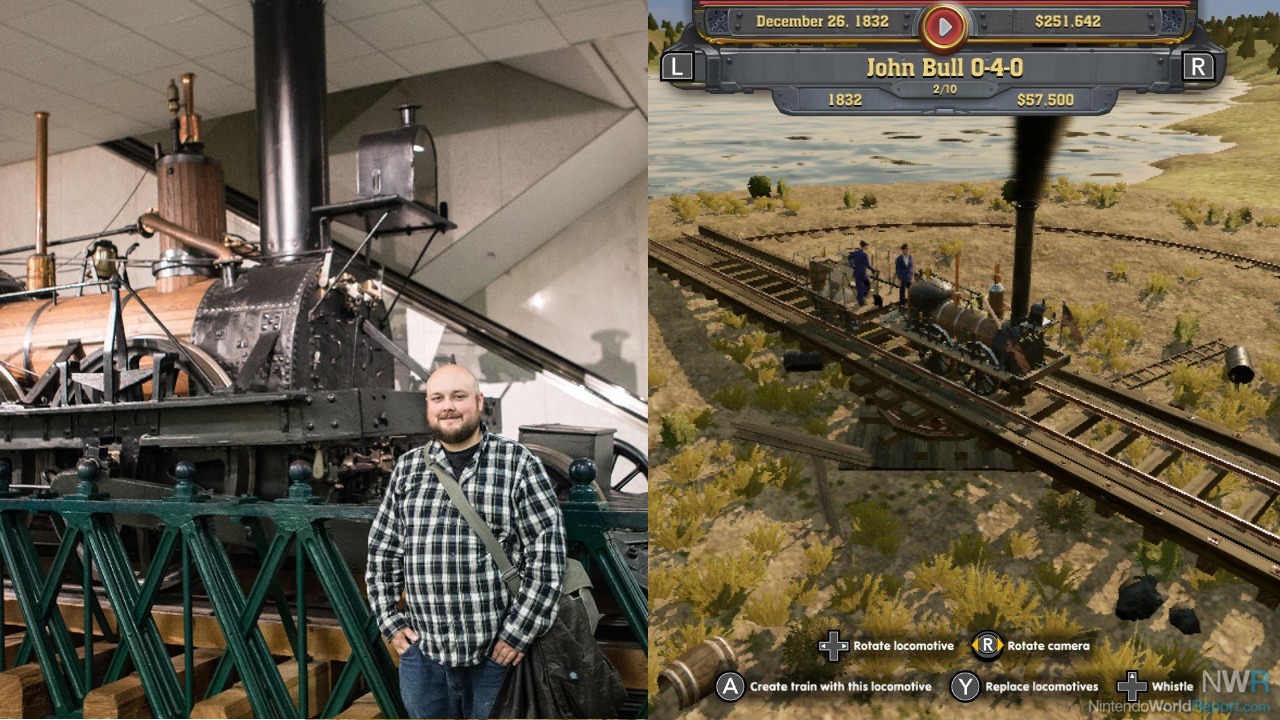 The basic premise starts you as a railroad baron attempting to make a fortune in the 19th and early 20th century United States. Different options greet you at the outset, such as a tutorial-like campaign that loosely follows major railroad events of the 1800s. Scenarios add more complexity but also more variety. Multiple maps that add in Mexico and South America are included here, tying into some real history. Free Play gives you the keys to the kingdom, letting you make custom games in any time period with any amount of competitors that generate some general goals for you. The final mode is Sandbox, which is great if you don’t care about the economy at all and just want to run trains without worrying about the competition.

If you start with the campaign, you don’t necessarily go in chronological order. You start by building the Union Pacfic Railroad across the great plains and into the rocky mountains. Short video clips show you how to lay track correctly and how the menu items work. I found these very helpful as I’m not used to playing this type of game on a console, but once I learned how to use the radial menu, laying track and creating trains grew to be fairly intuitive. 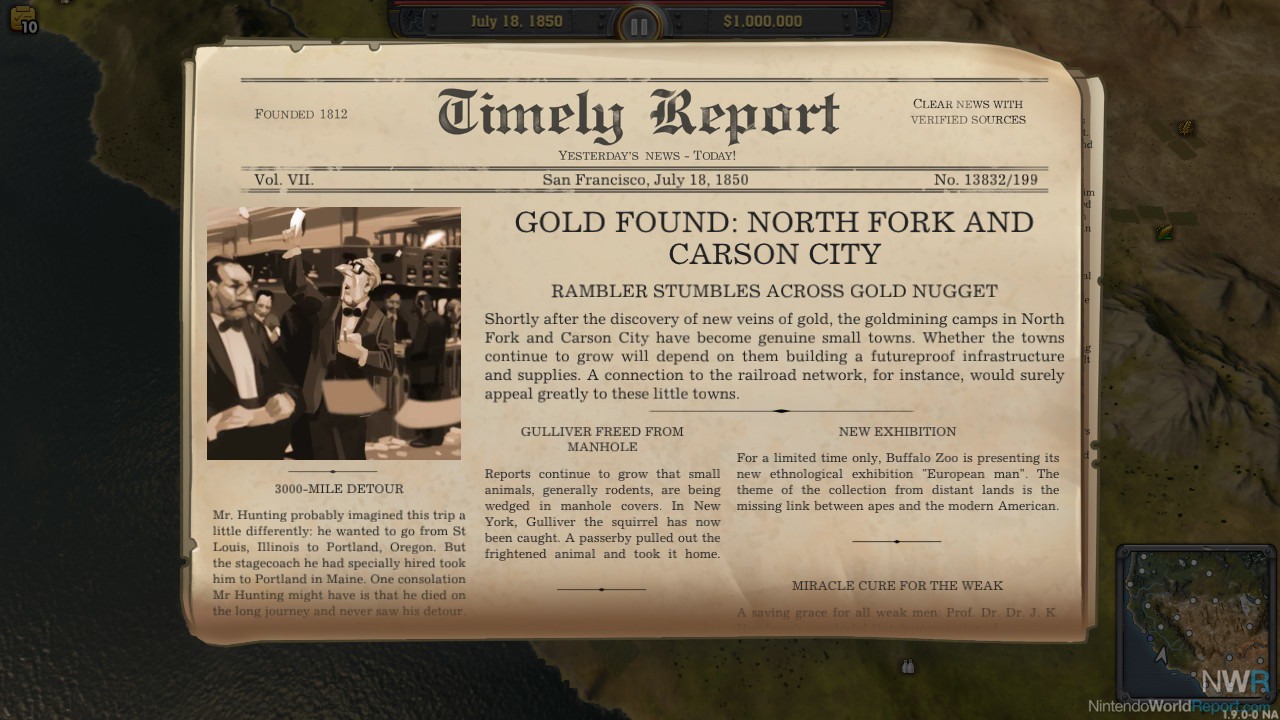 One of the cool aspects of Railway Empire is it gives you two (or really three) different options for building track: normal and realistic. Normal is similar to how trains were in the Railroad Tycoon games, where the trains will simply “pass through” each other on the same track. Selecting realistic makes it so you end up having a system similar to Transport Tycoon, where trains cannot occupy the same “block” of track and requires more complex track plans and signals to allow your trains to move efficiently and not clog up the line. There is also a third option, which is called Normal AI. That gives the AI players the easier track layouts while the player has to use the Realistic mode, basically acting as an additional difficulty level for the player. I’m an old Transport Tycoon player so I was typically playing with Realistic mode. 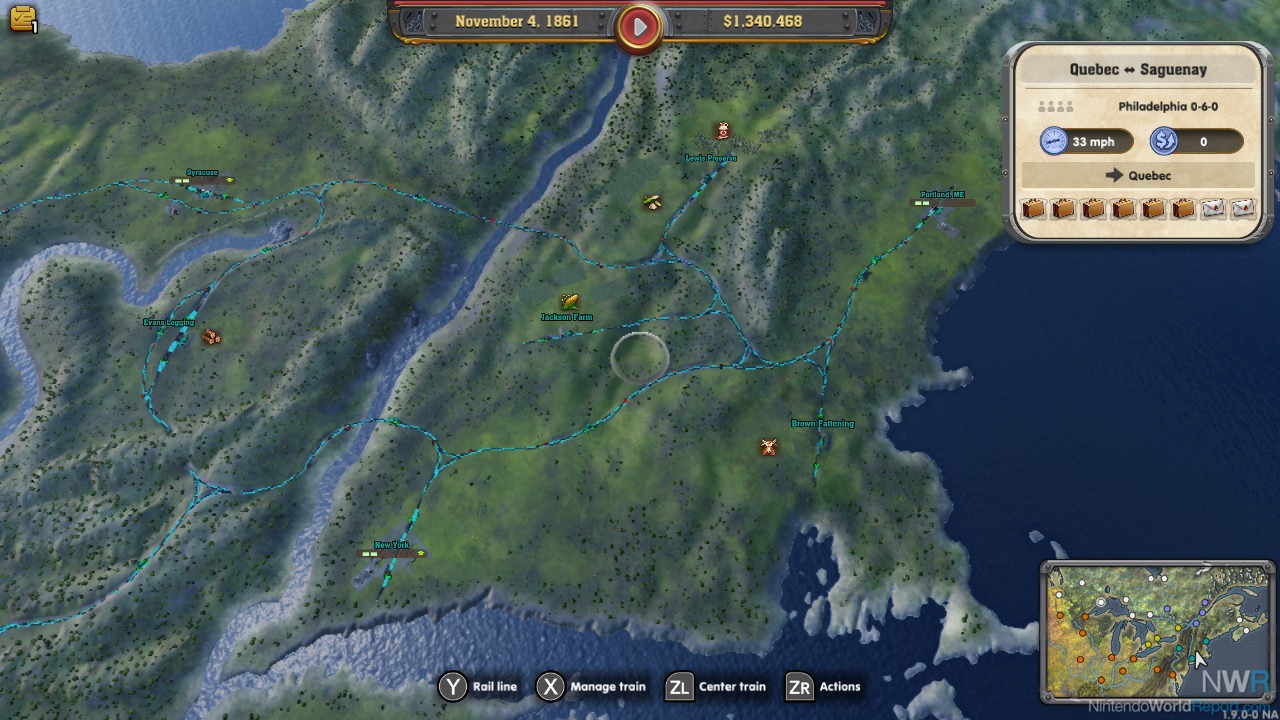 The track laying worked well, with a few exceptions. You click an area and then the game figures out the easiest way between the two points, creating bridges and tunnels as needed. This usually ends up with the most expensive but flattest route, which is good for the trains but not necessarily your pocket book. Luckily, it doesn’t immediately build the route, but shows you how much it will cost before you approve it, so you can redo the route if you want it to. For example, instead of digging a $1 million tunnel, you can wind through the mountains by creating multiple points closer together. What you lose in efficiency, you gain in savings. For parallel tracks, the game typically realises what you are doing and automatically puts them next to each other for you. Now one of my nitpicks for this is that while it is easy to create parallel tracks, it is sometimes hard to integrate switches into the track. That is necessary when you try to make a passing siding into a full double track main line. In this case, sometimes you might have to delete a good amount of the side track before relaying the second track. Once I learned this trick, it became just a small annoyance and the game doesn’t punish you much for it by giving you a decent amount of money back when you delete tracks and buildings.

One of the more troubling parts of Railway Empire was the consistent crashing I experienced in the Switch version. With regularity, the game would crash once every few hours. Rarely was it game-wrecking thanks to frequent auto saves, but I did lose considerable progress once. I’m not sure exactly what causes the issue, but if it’s left unremedied, it might make the longevity of the Switch release hampered. 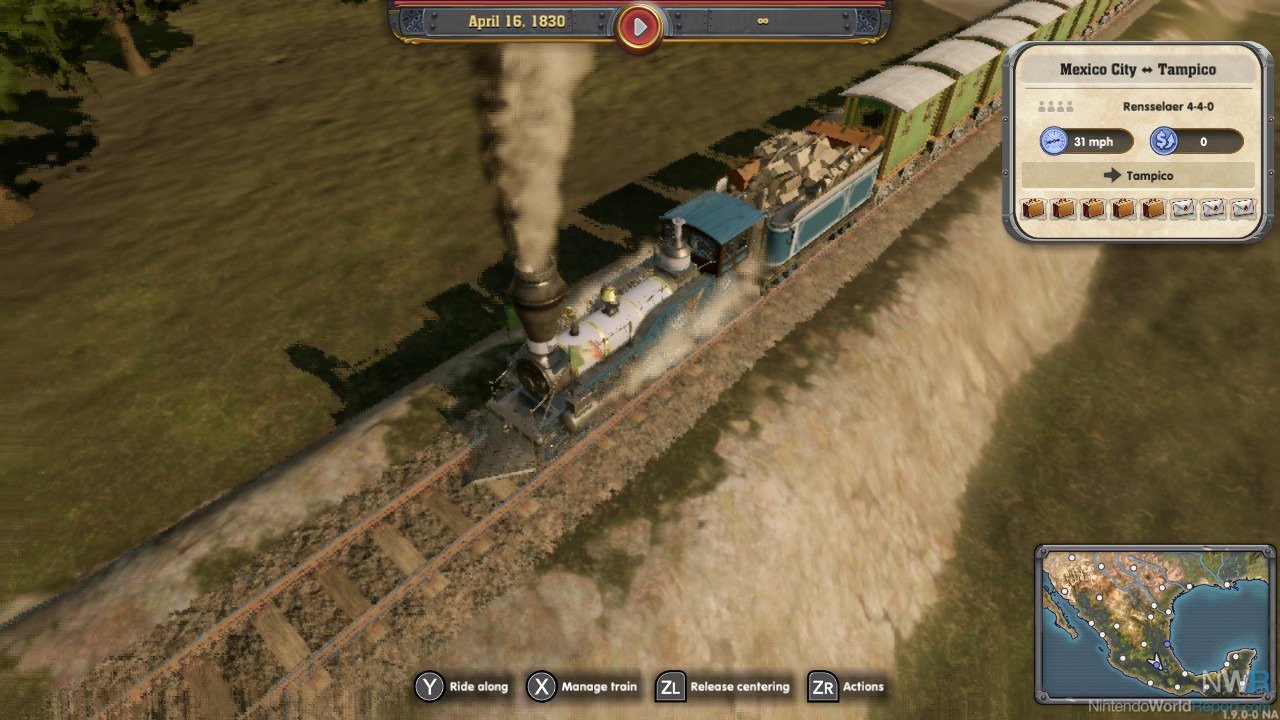 Now what kind of railfan would I be if I didn’t talk about the trains? The game does well with the accuracy of the train engines, with all of them seemingly modeled off a real life prototype. Each train is classified as either a freight, express, or mixed engine. Express is mainly used for fast passenger trains that need less adhesion to the rails while the freight engines have less speed but more traction, allowing them to pull heavier freight cars over mountain passes. A mixed engine is just as it says, a do-anything engine that won’t do anything particularly well. The right trains appear to be in the right categories as they would in real life. Now let me put on my nerd glasses and say that since the game is mainly focused on the years between 1830 and 1930, you end up with a lot of similar looking engines (many 4-4-0 “American”, 2-6-0 “Mogul” and 4-6-0 “Ten Wheeler” types), which is accurate for the time period but you end up not having many options for diesel or electric trains, since they were not wide spread until the 1930s or 1940s. The way you end up getting new engines is, instead of them just becoming available once you reach a certain year, you have a research tree similar to the Civilization games that allows you to unlock engines and other upgrades as you progress. This means you can have in theory some things like a streamlined diesel train helping to build on the transcontinental railroad if you play the research tree right.

Now the beating heart of any Tycoon game like this is the economy. Railway Empire’s formula should be familiar to anyone who has played Railroad or Transport Tycoon before. There are cities you connect and each city has an industry you need to transport goods to and from. Along with that, there are passengers and mail that need to be transported between cities. As you provide more goods and passenger service to the city, the bigger the city gets and the more demand increases. These things happen whether you build a railroad there or not, but much more slowly, as they are being brought in by cart, in theory. 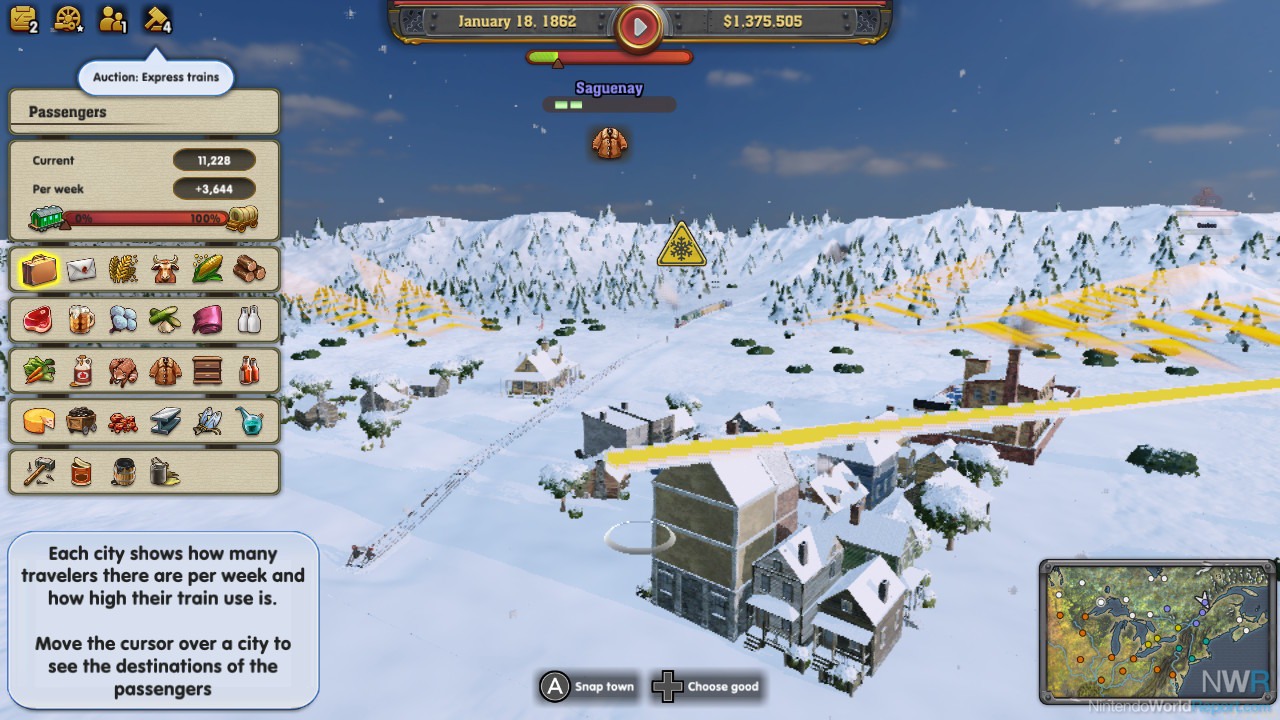 A lot of this plays out on each individual city screen. A chart tells you what goods are in demand and which are not. It’s difficult to read, since it uses icons that aren’t necessarily easy to understand for each column. The icons aren’t intuitive, though thankfully since this game has been out since 2018, I could look up my questions online, but it’s still confusing based on the in-game information.

Now, many goods are not made in cities but in farms and mines out in the countryside. Many of these goods will eventually wander their way to cities that need them but it is much faster to transport them via railway, so you may end up with many small trains going to the same city, thus choking up your rail lines. To avoid this, you can build warehouses along your routes that can store goods coming in from local industries. Then a single condensed train with many different goods can go into your cities. This is a feature I love and once I figured it out, I’ve been integrating them into all my railways.

Overall, I very much enjoyed Railway Empire, as can be told by my shoulders being sore from being hunched over my Switch while my wife watched the 10th hour of Millionaire Matchmaker. This definitely scratched an itch for me and will be my go to Railroad Tycoon-ish game from now on. I love that it is now on the Switch since I can now bring it on long flights. I would 100% recommend this to all trains fans and anyone who likes this breed of intense economic sim. A few hiccups minorly hinder it at times, but once you learn your way around the tracks, Railway Empire is a very sound game.

Thanks for coming over for this review. :)
It's a bit worrying to read this crashes every few hours with seeming regularity, as the game has been out on Switch in Japan since February. Gives the impression they won't be patching that out, and to be honest it doesn't instill great confidence in future Kalypso Switch releases like Port Royale 4.

Will gladly eat crow here if they fix it. I'm not much of a rail buff, and it's a minor bummer this is mostly pre-WW2 railways instead of stretching into the modern MagLev era, but I am partial to this type of tycoon game. Might give it a go if they patch it or if it goes on sale.

Seems quite interesting. The crash issue, while frustrating, is one I am familiar with from Sid Meyer's Railroads on PC. That game crashes periodically as well but the auto saves are so frequent I rarely loose more than one or two actions to it.

I'll still hold out for a bug patch or a good sale, but will give it a shot for sure thanks to this review.

Since I wrote the review, I've been playing it a bit more this week and over the weekend, and it hasn't crashed once since the official launch, not sure if its because I haven't been pushing it as much (needed to get in some Animal Crossing time) or there was an update I didn't notice. But I'll keep everyone updated if it happens more.