All the shooting, exploration, and environmental storytelling you can handle.

First-person shooters haven’t always been known for having compelling narratives. Instead, they’ve focused on having satisfying shooting mechanics, varied enemies, and wide arrays of weapons. The original Bioshock was one of the most notable titles in the HD era for the way it blended FPS, horror, and exploration with an engrossing story. Initially released on Xbox 360 in 2007, it (and a remastered version) would go on to be ported almost everywhere, finally landing on Switch as part of Bioshock: The Collection. The compilation also features Bioshock 2 Remastered and Bioshock Infinite: The Complete Edition. With dozens of hours of content, there’s more than enough to do in the worlds of Rapture and Columbia, but does the first appearance of these games on a Nintendo platform hold up to scrutiny?

Bioshock follows protagonist Jack after his plane crashes into the ocean. He rides a submersible called a Bathysphere down to Rapture, an Atlantean metropolis that has succumbed to class and power struggle and fallen into disrepair. In a lot of ways, Rapture is the star of the show with its detailed set pieces and environmental story-telling, but the world is as interesting as it is dangerous. Genetically-modified humans called splicers stalk you at every turn, and the infamous Big Daddies, who act as sort of a mascot for the series, are imposing and deadly. For an FPS, there aren’t that many unique weapon types, but armament like the machine gun and shotgun are complemented by special abilities called plasmids. These alter your DNA and allow you to shoot lightning from your fingertips or launch a swarm of bees to distract and gradually damage enemies. In addition to killing splicers, the plasmids can be used to solve puzzles and allow you to progress through the game. For being 13 years old, the first Bioshock manages to maintain that delicate balance of dread and wonder as you explore antagonist Andrew Ryan’s underwater dystopia, and it’s worth revisiting even if you’ve been under the sea before. 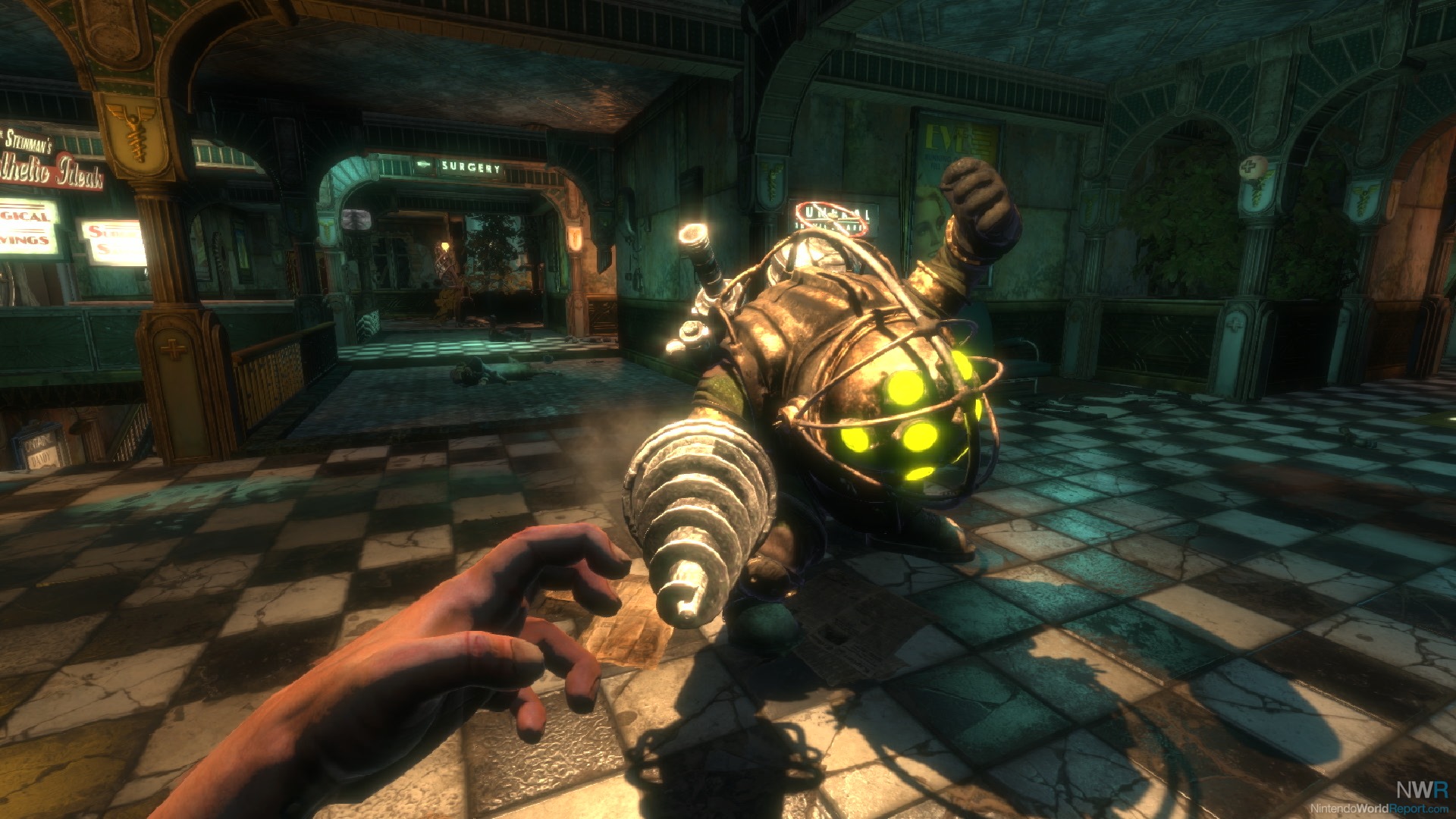 The sequel, Bioshock 2, puts you in the boots of a Big Daddy, Subject Delta and tasks you with reuniting with your Little Sister Eleanor. The Little Sisters play a role in each of the first two games as you are given the opportunity to save them or harvest them for immediate rewards in the form of ADAM, which can be used to purchase or improve plasmids and provide character buffs. Many of the mechanics and elements of Bioshock 2 are similar to the first game, making it feel like more of an extension than a true sequel. So much of the original was focused on introducing you to Rapture and all of its intricacies, meaning that some of the shine is lost by the time you get to the sequel. That said, the included DLC might feature one of the best pieces of Bioshock content available in Minerva’s Den, a standalone campaign that takes you to an unexplored part of Rapture. Its tight, focused story takes all of the best qualities of the first Bioshock and condenses them into a concise and memorable experience, so don’t feel bad about skipping Bioshock 2 and heading straight into Minerva’s Den.

The final entry in The Collection is Bioshock Infinite, a marked departure from the previous two games because it takes place primarily in the skies rather than under the sea but also because it veers more political than sci-fi. The setting of Columbia, like Rapture, is filled with interesting places to visit and a history to discover through journal-like devices called Voxophones. Infinite places greater attention on action, with a wider arsenal and the ability to leap from building to building and grind along rails with the Sky-Hook device, which doubles as a melee weapon. While there is an increased focus on the shooting, it doesn’t necessarily detract from the overall story. As well, protagonist Booker DeWitt seems to have a little more prominence in this Bioshock compared to the main characters of the first two games. Even if the narrative continues on the series’ dystopian themes, overall Columbia provides a much brighter world in contrast to the more claustrophobic Rapture. 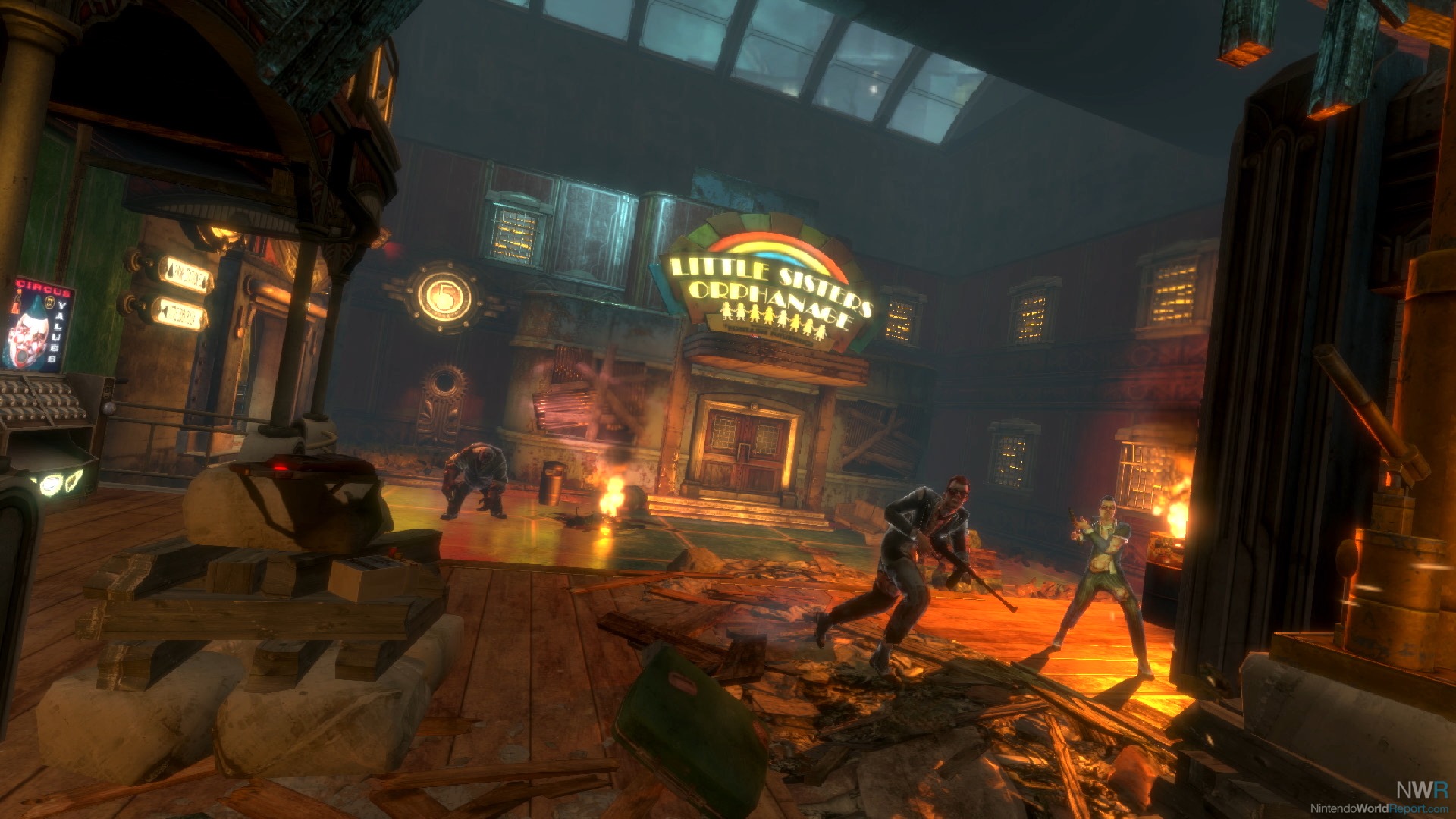 It’s worth noting that the performance of these three games largely holds up on Switch, in both docked and handheld configurations. The Switch version sticks closer to 30 FPS and targets 1080p on the TV and 720p in portable. Even in action-heavy sequences across the three games, the frame rate stays largely consistent, but pixel counts can drop slightly. Ultimately, it feels like you’re getting something between the current generation of consoles and the previous generation, but with the added portability of the Switch. Although there’s no gyro-aiming in this version, it’s still a hefty package of solid games.

Bioshock: The Collection is an excellent way to experience some of the finest first-person shooters of the last 15 years. Admittedly, it’s hard to ignore the fact that this compilation is regularly available at a deep discount on other platforms, but if the Switch is your only option, you really aren’t sacrificing much in the way of graphics and performance. For those who may have only experienced the initial release of these three titles, the added DLC and visual improvements make a return trip to Rapture and Columbia worth the price of admission

I think it's pretty clear that he's referring to how the game handled the Vox Populi, an organization of largely black revolutionaries attempting to overthrow the racist government of Columbia. One of the big themes of Infinite is that "power corrupts absolutely", so at one point of the game the situation changes where the Vox are actually winning the war against Columbia and begin doing some unsavory things that the Infinite DLC attempts to retcon later. This got a lot of criticism when the game came out.