It’s madness how well these ports stand on their own

I think Gearbox and 2K Games never expected the Borderlands franchise to grow as big as it did. The original title was applauded back in 2009 for its unique art-style, but the franchise really got going when the sequel was launched in 2012. With a huge cast of eccentric characters, a unique style of humour and an overwhelming number of guns, the Borderlands series reinvented the first-person shooter. For those of you who haven’t had the chance of playing these games before, the Switch version offers a great way to play these games both on- and offline.

This collection consists of the first Borderlands game, Borderlands 2 and Borderlands: The Pre-Sequel. While each game can be purchased separately the collection offers an incredible amount of content, including all the additional DLC, which are hefty chunks of content. If you aren’t interested in the complete collection and would only want to play one of these games, I’d suggest starting out with Borderlands 2. This is, in my opinion, the peak of the series where both the gameplay, visual style, humour and characters are at the top of their game. Borderlands 1 is still really enjoyable, but the gameplay consists of a lot more fetch-quests and the game does get really repetitive in a short amount of time. The Pre-Sequel stands on its own, but you will miss out on a ton of story references, inside jokes and build-up if you haven’t played Borderlands 2 beforehand. 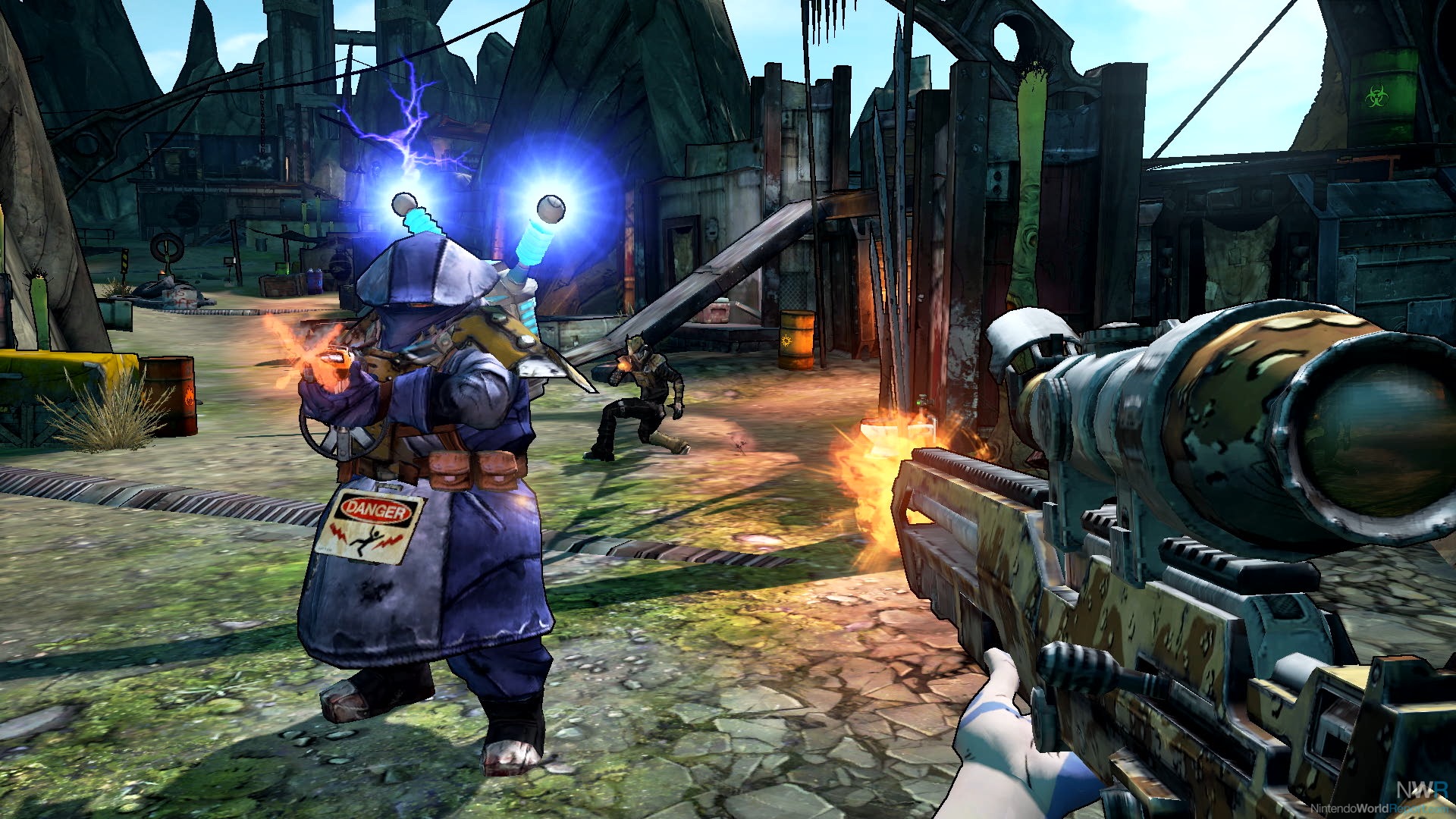 So, let’s talk a bit about what goes on in these games. The Borderlands series focuses on mercenaries called Vault Hunters. On the planet Pandora an ancient Alien vault was hidden, and everybody has been after its contents ever since. The world is mostly occupied by psychopaths, bandits, raiders and a variety of deadly wildlife, flora and fauna. While the series doesn’t feature a steady main character, you meet several quirky (and mostly insane) characters who are all trying to either assist, kill or profit off you. The style is a blend all its own, using a cel-shaded look that makes everything look slightly more cartoony. Borderlands 2 in particular has some incredible vistas and locations where you shoot your way through icy caverns, stranded pirate ships, floating fortresses, alien factories and desert wastelands. Your main goal is to help people solve their quests, shoot everything that moves and collect as many guns as possible to expand your arsenal.

What makes Borderlands’ gameplay so satisfying is the combination of personality, customization and movement options. Unlike many other shooters Borderlands encourages almost every type of shooter gameplay for each character. You can carry a ton of weapons with you at all times and swap between them whenever you feel like it. Are you a player that wants to shoot enemies from afar? Sniper rifles are made for you. Would you rather get in the middle of the action and shoot enemies without aiming down your sights? Shotguns and SMG’s will do the trick. There is an option for almost every way to handle a combat scenario. At the same time every character has his or her own unique skill tree and ability. For example, the heavy characters like Brick or Krieg are able to increase their melee attack damage for a short while making every kill feel damn satisfying to pull off.

In addition, Borderlands requires you to jump and run around like a madman. Hiding behind cover is always an option, but there is nothing stopping you from using both verticality and movement to get in close and get as many kills as possible. Shields can block a lot of hits before you get damaged, and even if you are being killed you still have a chance to get what is called a ‘second wind’. During the time you are down, if you manage to kill any enemy you are revived and can get right back in the action. All these systems work in tandem to provide a great combat and gunplay system that can best be compared to Doom and something like No More Heroes.

While you can go at it alone, every Borderlands game is optimized for a multiplayer experience. At any time you can play with up to three others to take down the enemies on Pandora. Allies can revive you if you are down and you are able to swap weapons between the party as well. Your enemies do grow stronger in size, but multiplayer makes the Borderlands experience that much more satisfying, especially since you can divide into roles that your party can take on. Do you want to have a protective Siren who can not only snipe from afar but also lock enemies down to regenerate health? Maybe someone else can take the role of an enforcer who keeps enemies at a distance using drones and turrets. Combined with an unbelievable amount of weapons that can have different statistics, abilities or even elemental infusions for extra damage there really is no limit to how you can shoot your way around Pandora as a team.

The biggest worry I had going into Borderlands on the Nintendo Switch was performance. While the Switch has been able to run current gen games at a lower resolution, like DOOM 2016 for example, Borderlands always felt like a game that both in scope and features would be a hard get on the Nintendo Switch. Thankfully I’m so happy to report that these ports play like a charm. The worst thing I can say is that loading times are a tad longer than you might expect, visually it isn’t as detailed as other ports and the game does run at only 30fps. (We’ve made a handy comparison for you to watch over here: (LINK)). But other than those slight visual hiccups these games run almost flawless on the Nintendo Switch in both docked and handheld mode. The handheld version looks really sharp on the screen and the docked version does seem to improve resolution slightly.

The online multiplayer and offline split screen multiplayer also work without too many issues. While playing online with others I only encountered one unexplained error where the game shut down on me. We couldn’t recreate this error in our almost three hours of gameplay and I was impressed that there wasn’t a single moment where we’ve had dropped frames. Even more interesting is that the Switch version has built-in voice chat when using a headset that has a microphone. While I personally prefer to use an external voice chat service, it’s great to see that the option is there. You can even mute other players if you don’t wish to communicate with random other players. The only downside to online multiplayer is that there is no cross-play between the Switch version and previously released versions.

Check out our video comparison of the Borderlands: Legendary Collection compared to the PC and PS4 versions in our handy video!

The question of whether I would recommend you getting the Borderlands: Legendary Collection is a simple one. If you haven’t played the Borderlands games before and don’t own another system that can play them, these ports are an amazing and great way to play the games. If you have played the Borderlands games before, this collection does a great job of presenting the games you’ve loved and adds the benefit of handheld play and all previously released DLC. But be aware that for the visual and performance aspects you will not get the same experience as on other consoles or PC. Still I commend 2K and Turn Me Up for giving the Borderlands series a great treatment on the Nintendo Switch. Almost everything that made these games great on previous systems still remains intact and these are still some of the best and most fun shooters from the last generation. I’m hoping that one day Borderlands 3 will make its way onto the Nintendo Switch as well, because if this port proves anything it’s that Turn Me Up has found a way to make the Switch even more accessible for previously ‘impossible’ ports.