Visual novels are a plentiful genre in the world of video games, especially on Switch. While I’ve enjoyed a few in my day, I wouldn’t count them as one of my favorite genres. My ears perked up though when I heard about Monster Prom coming to Switch with Monster Prom XXL. Labeled a competitive dating sim, what Monster Prom ultimately is is an acid trip of a visual novel that you can play and replay with friends as you all try to win the heart of one of several monsters and take them to prom. 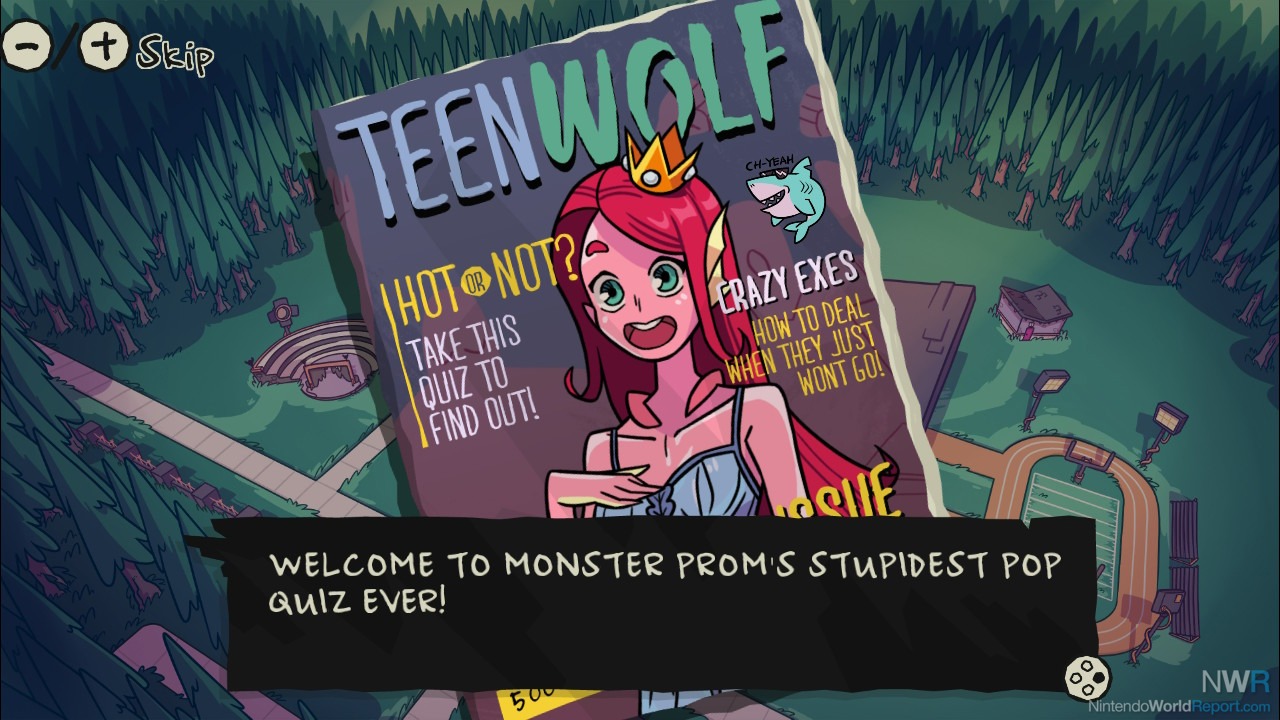 The premise is imminently ridiculous and told in a daffy meta way. If I had to compare the overall vibe to another piece of media, it strongly reminded me of the cult cartoon show Clone High (never heard of Clone High? You should probably go find and watch Clone High). Anywhere from one to four players pick one of the blank-slate playable characters and set out to go through the last few weeks of high school, interacting with classmates and trying to find love. Each of the dateable monsters are gloriously one note to start, like Polly the drunk ghost, Damien the hot-tempered demon, or Liam the hipster vampire. It’s not like they all have secret tragic origins or anything, but they’re more fully realized than I expected from the initial glance. With hundreds of possible events and numerous endings, each of these characters have a ton of different possibilities and a bounty of story to uncover. 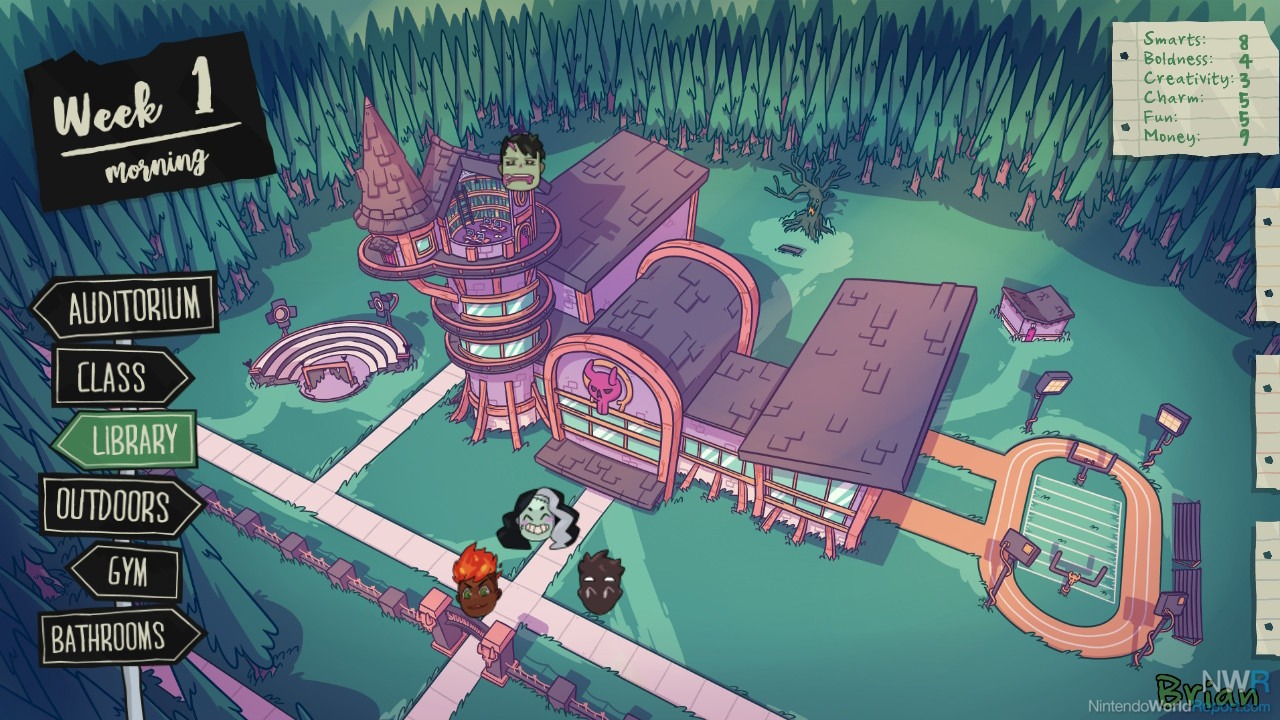 A typical game consists of three weeks of activities. Each week has a morning, lunch, and evening round with a weekend event in between. Play for each week sees each player pick a part of the school to visit or a lunch table to sit at, triggering an event that ends in communication with a monster or two. It’s all witty and amusing dialogue punctuated by a binary choice that will help increase your affection with another monster. Along the way, everyone has stats in traits such as boldness, fun, and money. Raising those stats with correct decisions and a little bit of luck becomes imperative for winning over different monsters. At the end of three weeks, players pick their dates and then see what their answers are. Rounds can take quite a while, with each player roughly adding about a half-hour. The three-week mode is the base one, but a shorter two-week mode chops off some time if desired.

Even with so many outcomes, repeating story events happened over my multiple playthroughs. I was actually pleasantly surprised how much the repetition didn’t ruin the fun. It’s a legitimate challenge to puzzle out how to win over the different prospective beaus and if anything, having some foreknowledge of what can happen depending on your answer to a prompt can help you better craft your dating strategy. I enjoyed trying to uncover how the game works under the hood, but if you’re so inclined, you can easily take a peek at how to be a little more deliberate in winning the hearts of your classmates and going after secret endings. Some of the secrets are inscrutable, but the randomness of it all is part of the charm. 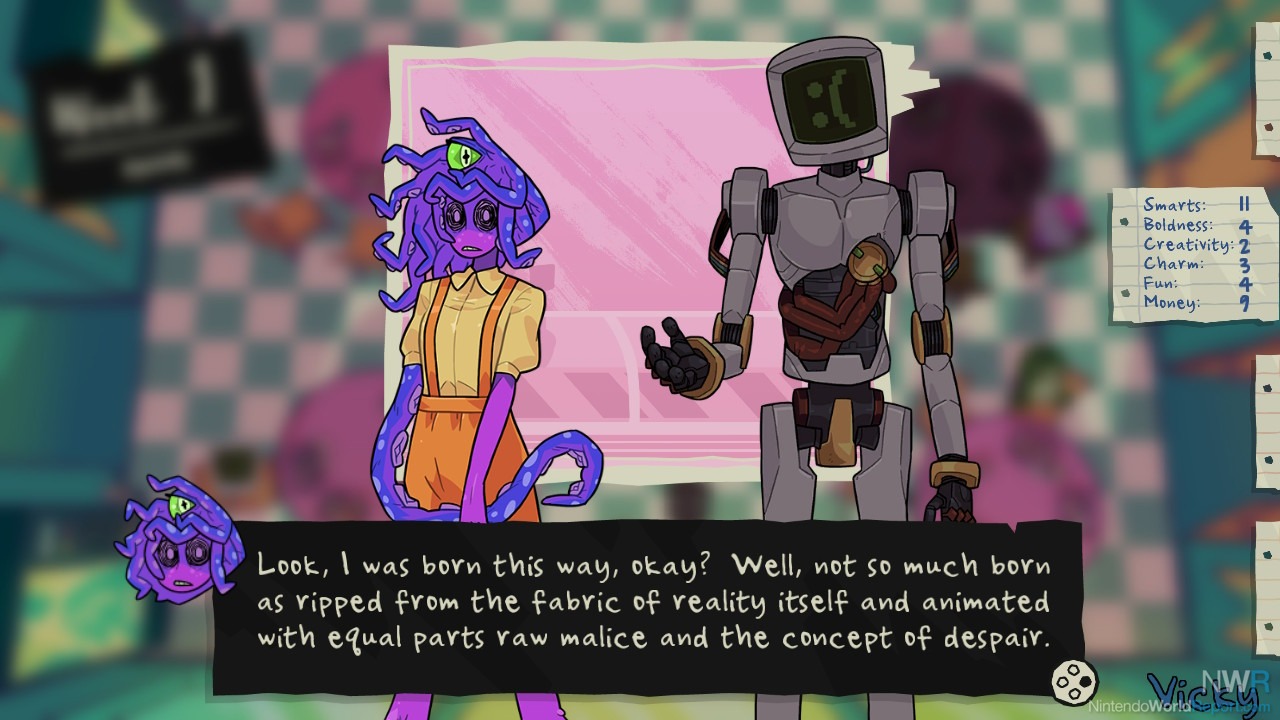 While local play is the best route for Monster Prom multiplayer, online is also offered. Online is fine, though if one person drops, the whole game immediately drops as well, which can be frustrating. At the behest of some Monster Prom aficionados at Nintendo World Report (aka Joe DeVader and Matt Zawodniak), I wound up streaming my game to friends elsewhere (since how else was I going to try four player in the middle of a pandemic) and that worked very well. To make that mildly convoluted multiplayer route work, you also have the option to just use one controller for all players. Considering the only engagement is selecting prompts, it works very well.

A nagging issue cropped up while playing the game on Switch. The cursor is extremely slow. This might have one of the worst keyboard interfaces I’ve seen in a video game. Thankfully, you only use it for name entry at the beginning, but it’s representative of how the user interface is often rough. It’s unclear at times where exactly your cursor is and I had issues selecting specific icons sometimes. This might be the result of the port from PC to Switch, but it’s still unseemly. The version on Switch does come bundled with the Second Term expansion that adds two new romantic possibilities and new scenarios. If you’re sitting down to play this, you’re probably better off starting with Second Term right away.

Monster Prom XXL is not a game for everyone, but if you’re down for some hardcore monster dating with a penchant for foul-mouthed humor and goofiness, it’s incredible. I love the way it takes a visual novel and dating sim and transforms it into a party game. Some rough edges might be present in the interface, but Monster Prom is a riotously good time.