Hatsune Miku: Project DIVA Mega Mix is the latest in a long line of rhythm games featuring the loveable titular Vocaloid character Hatsune Miku. She and her friends dance around, have fun, do normal activities, do supernatural activities, and form the basis of the game’s presentation. The presentation is easygoing and easy to like, but it’s not why I’m drawn to this series. I like Project DIVA for the gameplay. 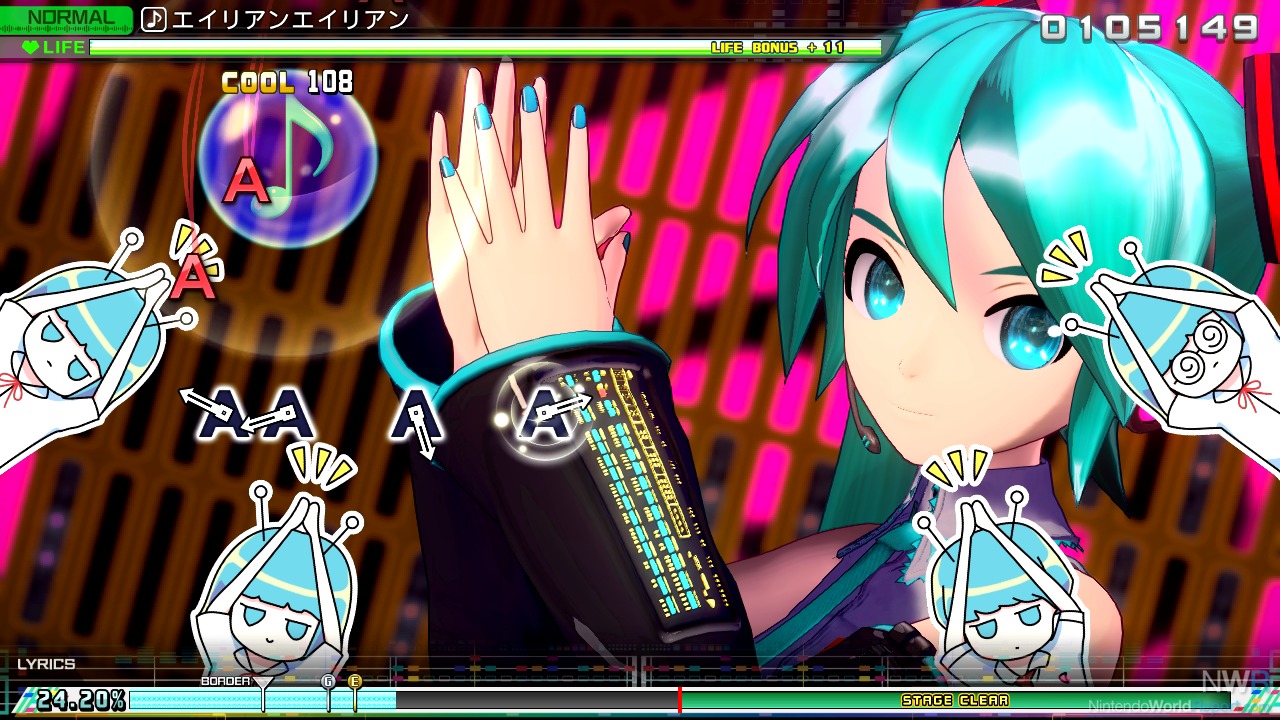 Project DIVA is rhythm gaming at its purest and most fun, and Mega Mix is no exception. While a music video plays, button prompts fly across the screen and it’s your job to press the right button at the right time. Think Dance Dance Revolution but with face buttons instead of a mat. Sometimes you have to hold a button down, sometimes you have to press two buttons at the same time, and sometimes you have to use one of the analog sticks for a special note or two. You get points, you get scored based on how well you time your button presses, and you can fail a stage. There are challenge sections where if you do well, you get to hear an extended version of the song. Et cetera. Et cetera. Even if you haven’t played this series before, you probably still get the idea.

The main mode is “Rhythm Game,” which is, of course, where you find the bulk of the content. Rhythm game comprises two modes: Arcade Mode and Mix Mode. Arcade Mode features the gameplay described above, and Mix Mode is a special new mode for the Switch where you can move the Joy-Con forward and backward to move two paddles, and then use the ZR and ZL buttons to match up the paddles with the notes. It works fine, but the bulk of my time was spent in Arcade Mode because I prefer to play my Miku with buttons, not motion controls.

The game features over 100 songs (with over 100 unlocked right out of the gate), some new to the series and some being fan favorites from older games. The soundtrack here is much better than previous Project DIVA games, mostly because there’s around three times as many songs here as there were on any of the Vita releases I played in the past (though Hatsune Miku: Project DIVA Future Tone on PS4 has a whopping 220 songs). You’re bound to like something in its J-pop-centric soundtrack. That said, I would still say your-mileage-may-vary. While I enjoyed quite a few songs, about two-thirds of them I’m never going to play again after this review. There are some 9/10 songs on there, but the bulk of the soundtrack, to me, feels like about a 6/10. Taste is taste, so more hardcore fans of the series may feel differently.

Outside of that, there are custom playlists and a substantial customization mode where you can dress up characters and have them wear your selected clothing and hair in-game. It’s nice, but like I said at the outset, I play Miku for the rhythm gameplay. It’s cool that it’s there, but if you don’t want to engage with it and just want to focus on getting the highest score possible, you can do that.

Hatsune Miku: Project DIVA Mega Mix is a wholly competent rhythm game with a bunch of content and a your-mileage-may-vary song list. If you like tapping to the beat while colorful Vocaloid characters dance around, this game has a lot of that. However, if you’re looking for a story mode, a campaign, or anything beyond an excuse to tap to the beat, this isn’t the game for you. It does one thing and one thing quite well, and for me, it’ll do.