If you long for the days of Clerks and Mallrats, here’s a retro-inspired game for you.

The line between good and bad licensed games is always thin. For every DuckTales, there’s whatever that Back to the Future NES game was. So when a Jay and Silent Bob video game popped up as coming soon to the Switch, I had some doubts. While Jay and Silent Bob Mall Brawl is very much for fans, by fans, the developers at Spoony Bard put together a loving retro beat-’em-up that is jam-packed with references to View Askew Kevin Smith projects as well as its clear inspirations, Double Dragon and River City Ransom.

Mall Brawl originated as a crowd-funding bonus for the forthcoming Jay and Silent Bob: Chronic Blunt Punch. As such, the style and design remind me a lot of the retro Bloodstained Kickstarter bonus, Bloodstained: Curse of the Moon. Mall Brawl doesn’t have a whole lot to it. The graphics are pure NES-era glory, featuring Kunio-esque Jay and Bob doing battle with evil hockey players, mall cops, and even the Easter Bunny. Co-op is available, though I primarily played by myself, which has some added layers of strategy. You can switch between Jay and Bob at the press of a button. When one dies, you automatically switch to the other and over time, the other one can be revived. Additionally, when one is low on health, switching away from that character will let them heal up to half-health. It’s still relatively skin-deep, but it’s a neat twist. 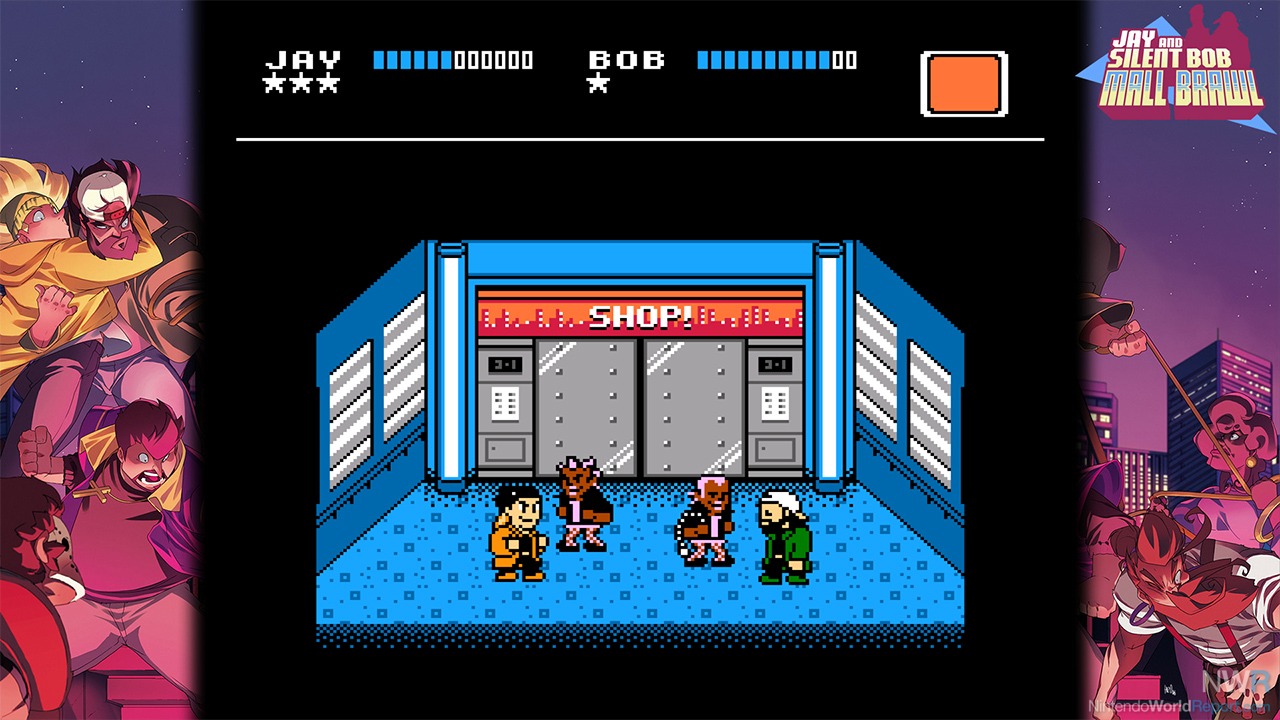 Controls aren’t complex. You’ve got punch, kick, and jump. Each character has their own specials; Jay does a spinning kick while Silent Bob throws down a Haggar-esque lariat. It’s evident in some of those touches that the developers have an affinity for old-school beat-’em-ups. Easily the best bit is Adoughbo, who is modeled after the legendary Double Dragon baddie Abobo, but since it’s a mall, he’s got a pretzel for a head. Hell, there’s even a shopping cart sequence reminiscent of the Battletoads bike level. Even though it’s not as hellacious as its inspiration, it’s still maddening.

While the video game gags are cute, the real bread and butter of references is found in the world of View Askew: Kevin Smith’s movie universe that features the likes of Clerks, Mallrats, and Jay and Silent Bob. I was a big-time Smith fan back in the 2000s, so a lot of these references landed for me, though I can’t help but admit how esoteric some of them are. Do you remember that episode of the Clerks cartoon where Gilbert Gottfried voiced Patrick Swayze riding a horse? No? Not surprising, but I sure as hell remembered that and giggled when the boss of a level was Swayze on his horse named Point Break or whatever its name actually was. Mall Brawl is very reminiscent of the most recent Kevin Smith movie, Jay and Silent Bob Reboot. It has so many inside jokes and references that it might just be nonsense if you’re not familiar with the source material. However, I count myself among the people who are in on the jokes and understand the references, so Mall Brawl is a cute-as-hell game. 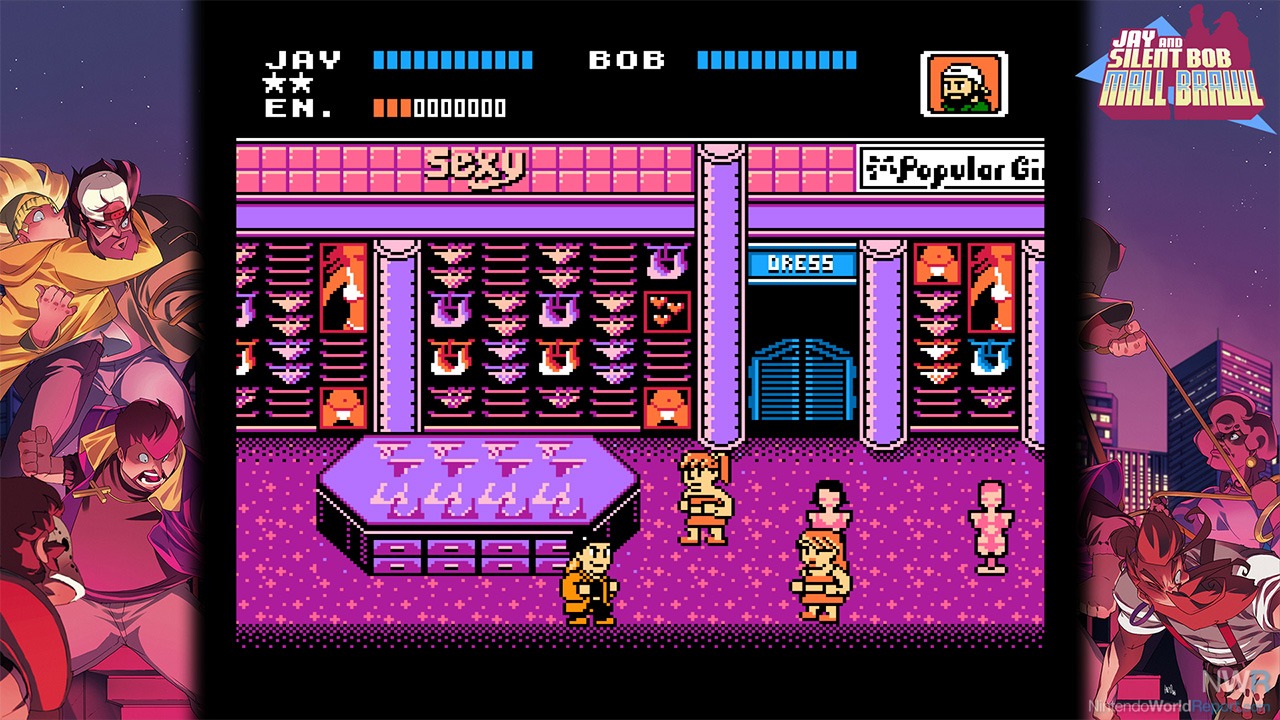 Remove the video game jokes and Kevin Smith references, and Jay and Silent Bob Mall Brawl is a run-of-the-mill retro beat-’em-up. There’s nothing bad about it, but it also doesn’t do anything special. As a backer bonus for Jay and Silent Bob: Chronic Blunt Punch, it seems like a great deal. As an individual game, it’s a harder sell, but if you can recall quotes from Mallrats and still occasionally toss in a “snoogans” into everyday conversations, Mall Brawl is a good time.