A neat and novel concept that isn’t really a ton of fun to play.

As far back as Excitebike on NES, games have had stage, course, and level design modes. The RPG Maker series has led to memorable titles like To The Moon and many others. SuperMash takes the idea of creating your own games and gives you a tool for blending two genres and adding certain elements to them. At launch, you can choose two of Platformer, Action Adventure, Shoot ‘Em Up, Metroidvania, Stealth, and JRPG, and SuperMash will create a unique slice of a game with a set objective and usually a time limit. Given that you only have so much control over the resulting product, the software that enables the creation process needs to be capable of generating enjoyable gameplay segments to play through. Unfortunately, this doesn’t often happen here.

The game’s light narrative involves a video game store being evicted and needing to secure both a new location and new hook. After finding a special PlayType machine with the ability to take two different cartridges and blend their genres together, store owner Jume and her brother Tomo work together to test and market new games they can package and sell. In terms of gameplay, Tomo walks around the small store completing main quests for Jume and special requests from customers that periodically waltz in. The former generally involve playing and saving a few specific Mashes—the name given to the game slices produced by combining two genres; the latter task you with completing a single, usually more specific Mash, like an easy, short JRPG platformer. You also have the option of playing a quick random Mash by pressing the X button, but no confirmation message means you’re locked into that decision if you press that button. The story and requests encourage you to try different genres, difficulty levels, and game lengths, but moving through even just the first few quests is likely to demonstrate SuperMash’s lack of staying power. 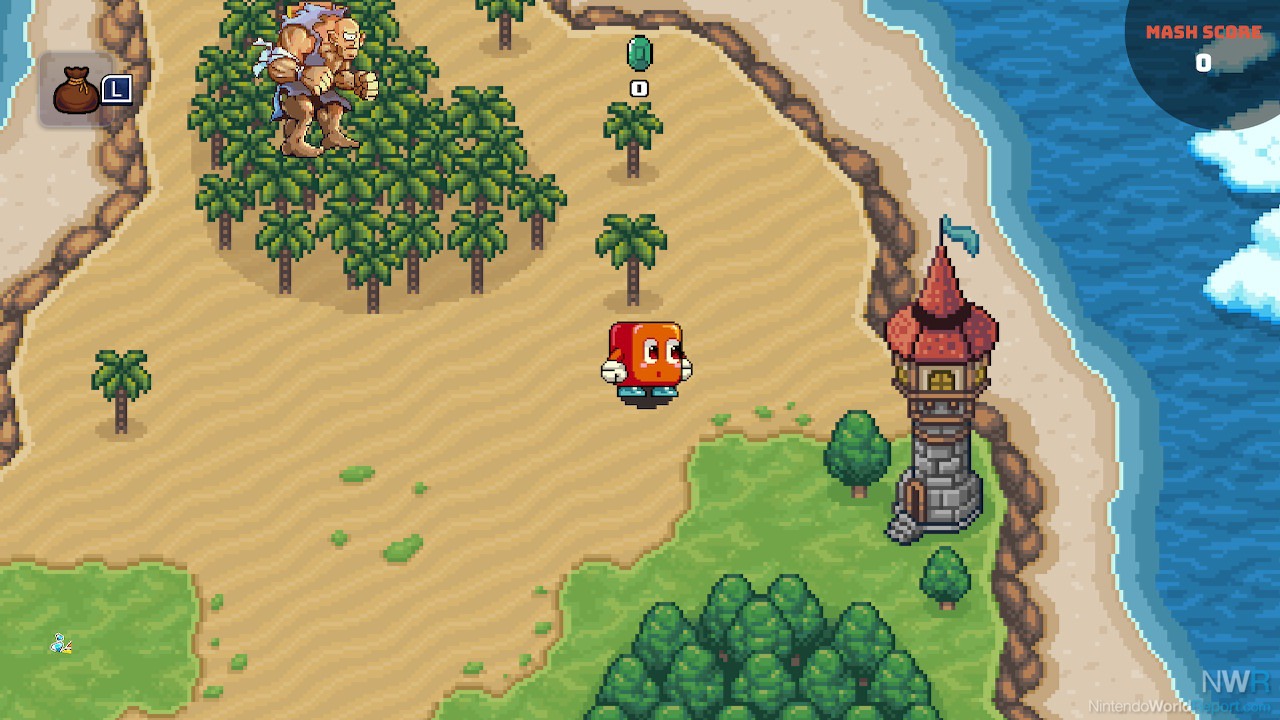 The bulk of the experience involves playing individual Mashes that you create, and these can be saved and shared with other people since each one can generate a unique code. However, after playing about 70 different Mashes, there isn’t one I would want to share with anybody. None of the gameplay is very compelling on its own, even if each Mash wears its inspiration on its sleeve. Action-adventure is 2D Zelda, specifically A Link to the Past; Stealth is top-down Metal Gear; the other genres are largely what you would expect but on a much simpler scale. SuperMash’s selling point is the production of completely unique gameplay slices with each Mash, but the resulting concoctions feel like one genre and a sprinkling of the second. For example, a Mash of Stealth and Shoot ‘Em Up could look just like a stealth game except your character and the enemies are ships rather than people. In other words, the gameplay is entirely stealth but minor elements of a vertical shooter are thrown in. A random positive and negative “glitch” is assigned at the beginning of the Mash, and these do add variety, but seemingly just for the sake of variety. A glitch that means periodically you can only move to the right isn’t fun; it’s annoying.

Whenever you boot up SuperMash a message screen reminds you that the system it uses doesn’t make games how a person would, which can result in Mashes that are “good, weird, unbalanced, incredibly hard, super easy.” In my time with the game, I’ve experienced all of these qualities, but what’s worse is there are Mashes that are actually unbeatable, especially when Shoot ‘Em Up is the primary genre. On multiple occasions, a Mash would task me with eliminating one or more of a specific enemy only for these enemies to never actually show up. The result was I would spend the entire 5 or 7-minute timer looking for something that was never coming, and the problem is that you don’t know the Mash is impossible to complete until you’ve failed due to running out of time. It’s certainly not the majority of Mashes that are broken like this, but so many others are too easy, and almost all of them are just boring. Using Action-Adventure as the first component in a Mash was usually a safe bet, but each Zelda-lite that resulted followed essentially the same pattern of exploring a handful of dungeon or overworld screens, collecting one or two items, and then unlocking a path to the goal. 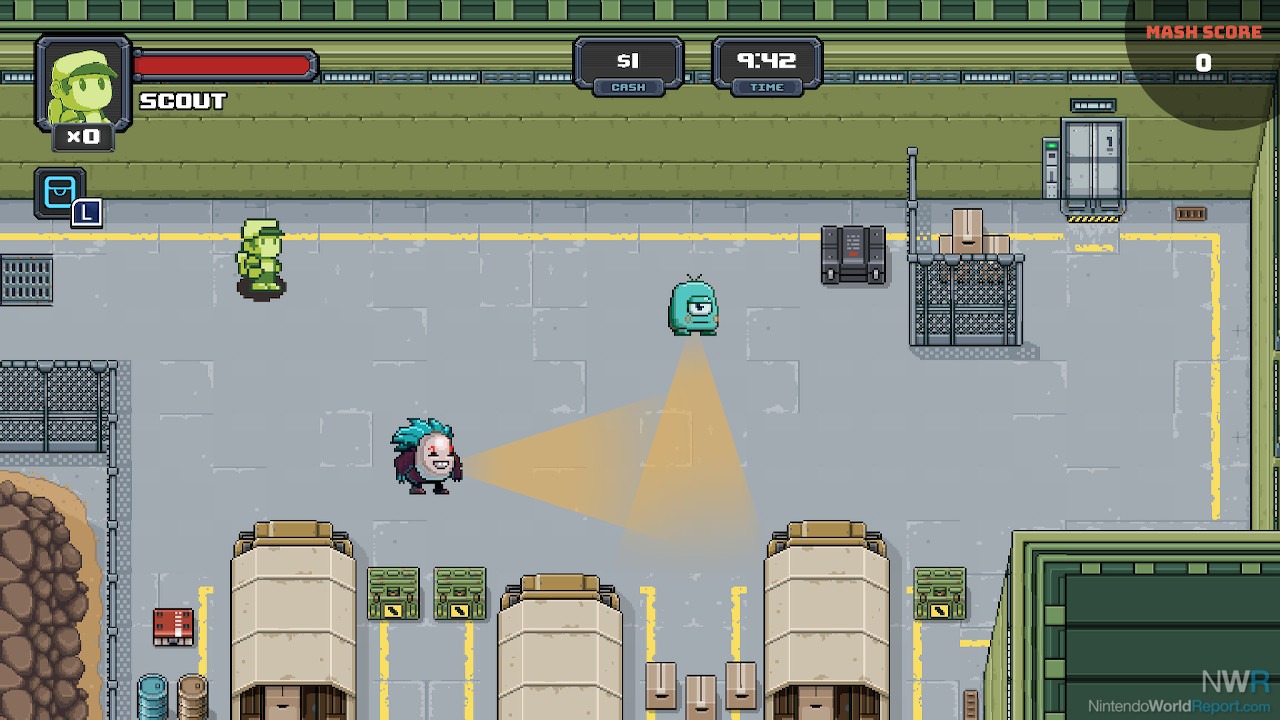 Without question, SuperMash is quirky and novel, but it’s much more interesting in theory than in practice. Although its eShop page indicates that new content will be coming in the future, I’m not sure that adding more genres or characters will solve its inherent problem: the Mashes don’t combine genres in a meaningful way. The JRPG genre is probably the worst one of the bunch since it takes a nondescript dungeon and just adds plain turn-based combat. When it's a secondary element of the Mash, it adds things like an ATB meter to action commands. Imagine playing a Zelda game where Link can only swing his sword once every two seconds! There are dozens of cards to unlock that can let you customize the characters, environments, and even music of a given Mash, but these are mostly single use and still don’t make for a very fun time. There may very well be countless Mashes you can produce with the tools on offer, but they aren’t different enough from one another. If you’re curious and don’t mind a variety of fairly shallow experiences, you might consider SuperMash-ing the eShop purchase button. Otherwise, maybe stick to the Monster Mash. 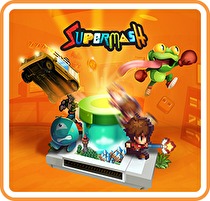