Sadly not the star crossed love I had hoped

As somebody who lives with a roommate, I always find my ears perking up upon learning about a game with local co-op. I first bumped into StarCrossed on the show floor at PAX East, where its gameplay caught my eye immediately. Playing a few rounds alongside the developer, I found it to be a tad rough but was intrigued by the potential of what was there. Now that the game has released on Nintendo Switch, I was interested to find out how the full release stacked up, as well as how well it would work if I was playing with my roommate instead of a developer who knew the game inside and out. Unfortunately, I found myself less enthused than I had hoped. 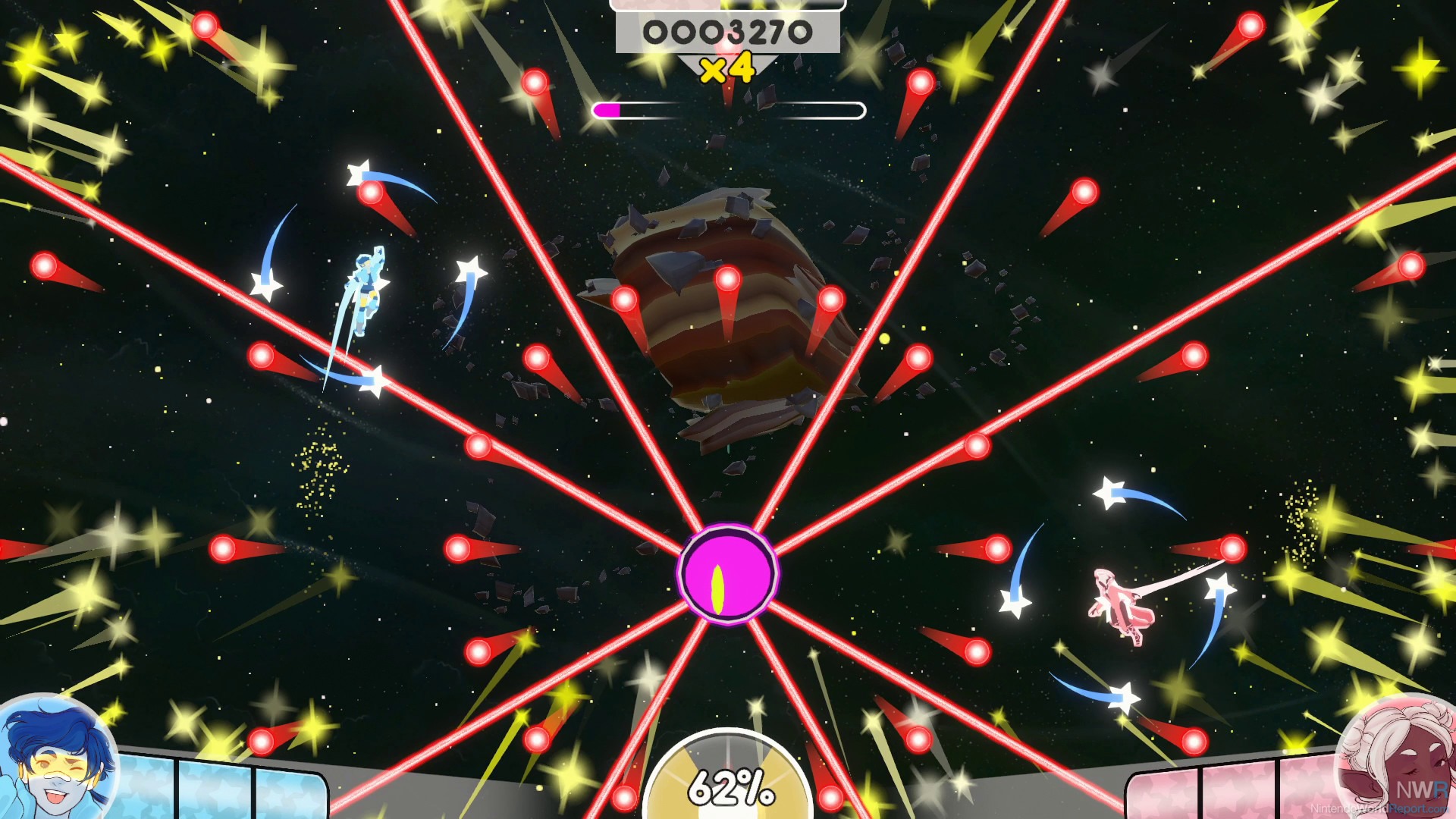 StarCrossed takes place in a universe far in the future from our own, where a mystical object known as the Harmony Crystal has allowed its users to compress space and time in a way that has brought the entire universe much closer together, both emotionally and quite literally. This has sparked an age of peace and prosperity, and every 100 years a celebration is held where the Harmony Crystal is put on display. During the latest of these celebrations, the festival is attacked by a mysterious villain known only as “The Scientist,” and the Harmony Crystal is stolen. In the aftermath five individuals find themselves imbued with a special power, being chosen as the Harmony Crystal’s guardians. Together these five must work together to track down the whereabouts of the stolen relic and defeat those who wish to destroy it, an act that would separate the universe once more and change life forever.

Players can choose from five characters: The Idol, The Hero, The Outlaw, The Princess, and The Weapon. Basic gameplay is something closely related to Pong, though instead of being competitive both players must work cooperatively to come out on top. A star travels between both players and damages any enemies it makes contact with on the way, and pressing the B button right before the star makes impact with you will cause your character to perform a Star Boost, increasing the speed that the star is moving. Both players must communicate effectively and move in ways that allow them to hit all enemies, including enemies that move in specific patterns or can only be hurt from certain angles.

Every character in StarCrossed plays generally the same, with the exception being their unique special abilities. As enemies are destroyed or lightning bolt powerups are picked up, a shared special gauge slowly builds up. Once it hits 100%, one player will be able to perform their special, which will change how the star behaves for a short amount of time. Some of these abilities are better against boss fights; for instance, The Idol creates a solid laser beam between both players that is able to melt a huge amount off any boss’s health bar, while others are more suited for screens full of multiple enemies, like The Outlaw’s ability that turns the star into a far larger “heavy star” that is very effective at clearing screens fast.

Speaking of shared meters, players do not share health, even though they honestly might as well. Both players are able to take three hits before they die, and if either player dies this will result in a game over regardless of how much health the other player had at the time. This became increasingly frustrating when sometimes myself or my roommate would make one small mistake that would cost us multiple hits and we both realized that basically meant that attempt at the current section was over. We found it most grating when a particularly maddening enemy combination or location would appear. For example, enemies seem to love spawning on the edge of the screen or in corners, or even worse on top of us before we had time to really react. There are health pickups but they felt exceedingly rare, especially for a game where one of your pair dying means an instant game over no matter what. A sort of resurrection mechanic or even just more common healing items would likely mitigate these frustrations.

There’s really not much more to say about StarCrossed. While its character designs are overall cute (I love The Idol the most) and the gameplay has obvious potential, in the end it just sort of feels bland and samey the whole way through. An Arcade Mode is also present, but it’s really more of the same as the story mode, just running through endless waves of enemies until you die. Dialogue during story mode can vary depending on which two characters the players are using, but this doesn’t amount to anything all that interesting or unique. The game can technically be played in single player, controlling both characters with the left and right analog sticks, but doing so is more frustrating than it’s worth and far more overwhelming than you would think. In the end, StarCrossed has potential and is a mostly enjoyable co-op experience, with some major problems that sadly drag it down too far for me to readily recommend.