More for players than creators.

Games with some form of player-created content tend to be favorites of mine. Although games crafted in full by developers will have more consistent themes and quality, it can be exciting to see what thousands of players around the world can come up with when they’re given the freedom to go nuts with a game’s engine. Levelhead has its work cut out for it on Switch, since it will inevitably be put up against its own inspiration, Super Mario Maker. Thankfully the development team at Butterscotch Shenanigans have come up with a few ways to make Levelhead stand out against Nintendo’s original effort, though the transition from PC to Switch wasn’t a seamless one.

In terms of core gameplay, Levelhead sets itself apart as a platformer by allowing its protagonist, GR-18, to pick up items and boxes that it can carry around and throw at things as necessary. In terms of narrative, GR-18 is a delivery robot, so the goal of every level will be to pick up a piece of cargo and carry it to the end of the level. This isn’t just for flavor though, as sometimes you’ll be forced to put the cargo down and carry other items around like keys to open locked doors or other miscellaneous blocks to weigh down pressure pads. 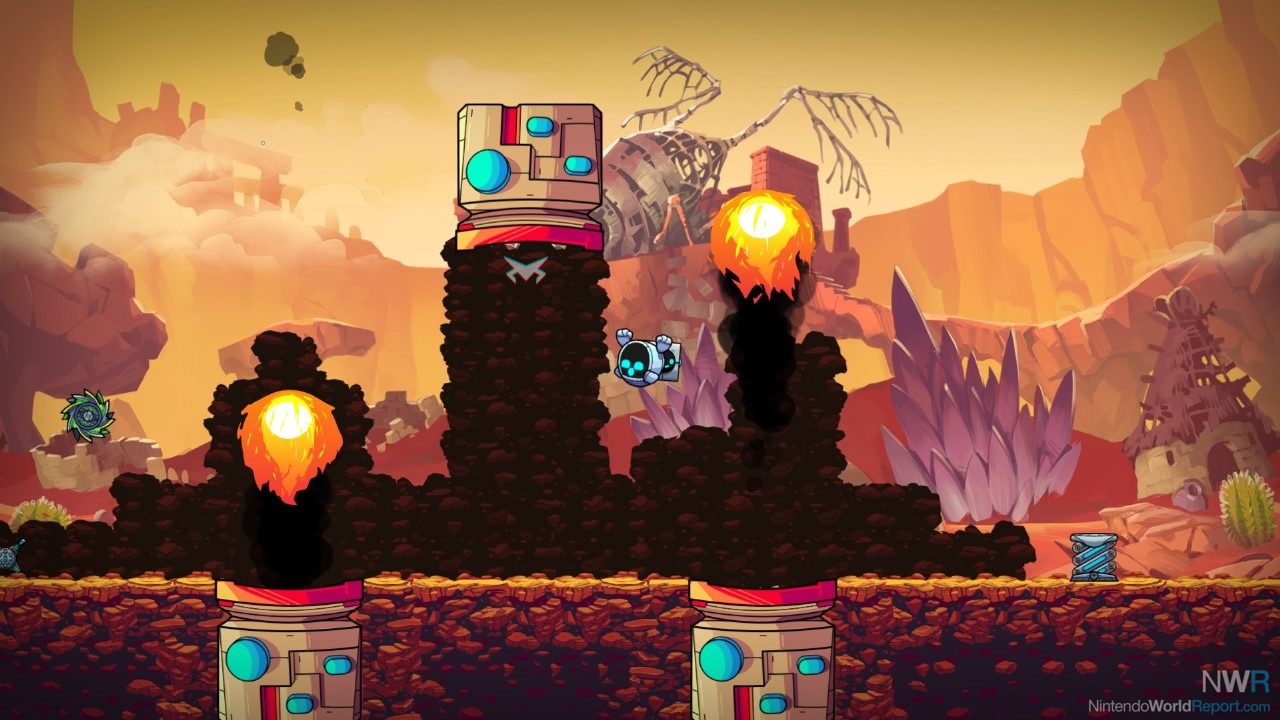 This is accomplished with GR-18’s extending arm that allows him to pick things up from a distance. This can present unique challenges, such as jumping off a spring block that you’ll need to grab in the air to carry with you, or figuring out the right position to grab a block from when you can’t manage to get directly to it. Combine this with more traditional Mario-style powerups that give you abilities like wall jumping or jetpacking, and you’ve got a myriad of ways you might be expected to solve challenges.

Though the player-created levels are the main draw of Levelhead, there is a full-length campaign with a complete suite of developer-crafted levels that slowly introduce you to all the game’s mechanics. I highly recommend playing through this campaign before heading online to try out the custom levels, since trying to figure out how all the mechanics work at once can feel a bit like a trial-by-fire. The built-in levels feel more like that consistent platforming experience I mentioned earlier, so there’s still good fun to be had if you aren’t really into the levels that other players are making. 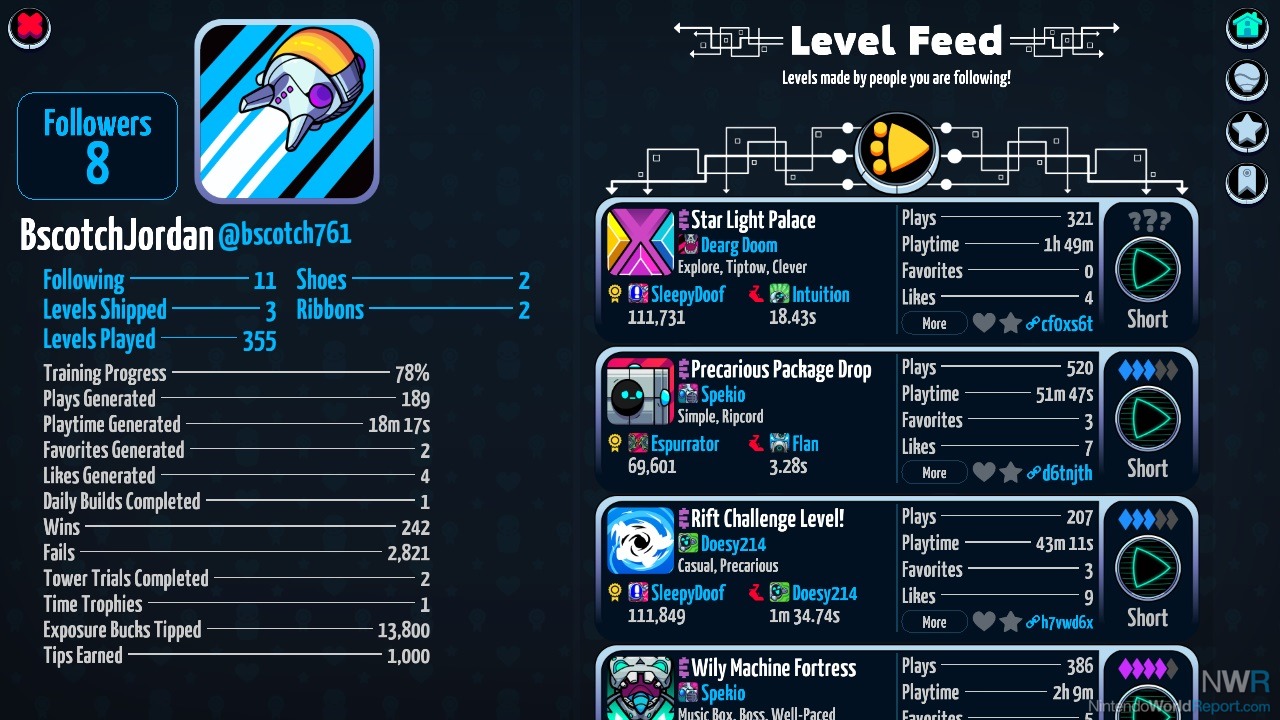 On any content platform, from level creators like Mario Maker to video hosting sites like YouTube, one of the biggest challenges to the developer is giving new fresh faces a chance to be discovered by the masses. Levelhead features a novel way to address this problem with a system that it calls the Marketing Department. The Marketing Department is where new levels that haven’t become popular yet will show up. Playing levels in the Marketing Department will reward you with Exposure Bucks.

These exposure bucks can then be used to boost your own levels higher up on the Marketing Department’s charts, giving them a better chance to be played, and thus a better chance to escape the Marketing Department and be featured in the Tower—the curated section of the game where popular levels are featured. This system does a great job at incentivizing players to check out unknown levels and give newer creators a chance to prove themselves. Creators are also encouraged to go out and play each other’s levels in order to earn Exposure Bucks to boost their own, leading to a more active and cooperative community. 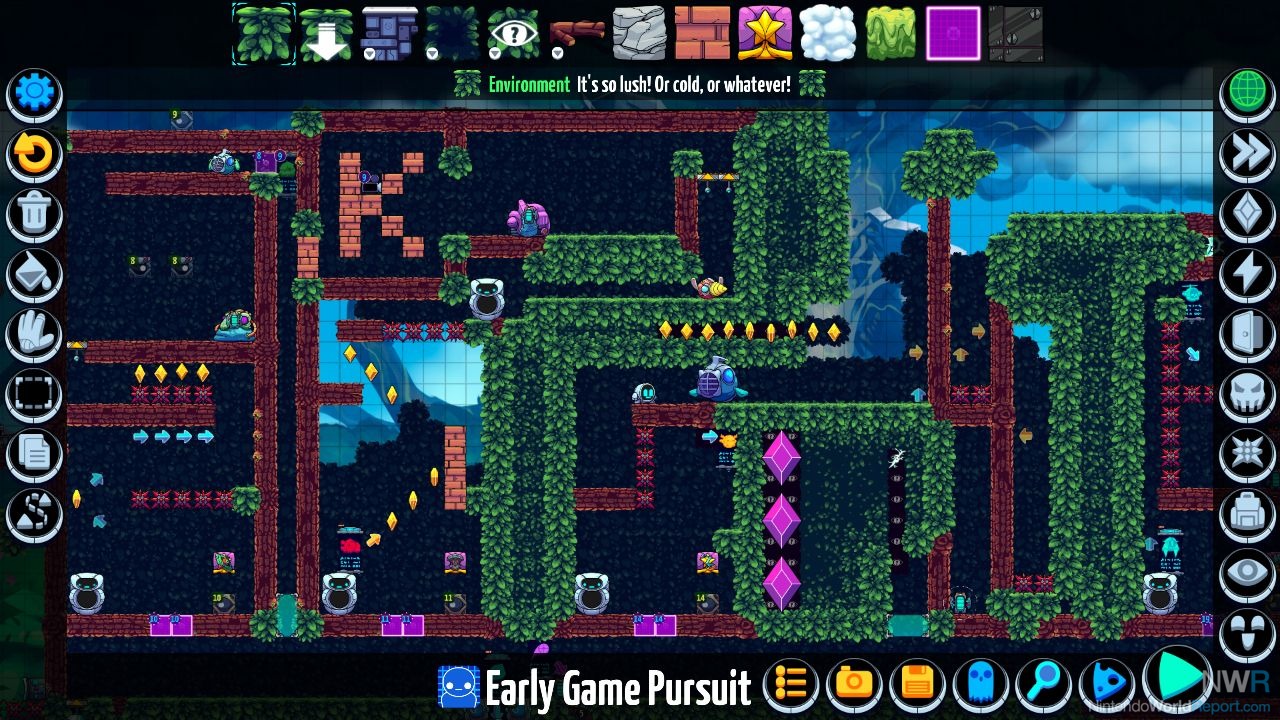 Unfortunately, the game’s biggest weakness is the level creator itself. Levelhead was originally a PC game, and the controls in the level creator make this abundantly clear. The mouse controls appear to have been directly ported over to a pointer that must be controlled with the joystick. This leads to the creation tools feeling very loose, and it’s tough to do anything with precision. Managing your tools can also be awkward since swapping to a different variant of your current tool and selecting a new tool altogether are mapped to the same button. I’m already not much of a creator myself so I wasn’t expecting to get a lot out of the creation tools, but the controls have such a steep learning curve that I ended up avoiding creating my own levels altogether.

Overall, I like Levelhead a lot, but I’m saying that as someone that was probably never going to make my own levels to begin with. I can see someone on the flip side of that coin who would rather make levels than play those made by others being very disappointed by the Switch version. On the bright side, the game does have full cross-compatibility with the PC version. With a pre-existing collection of thousands of levels with more coming in every day, anyone interested in simply playing levels will have a fully-featured experience. Sadly, creators will have to put up with some frustrating issues to get as much out of this game as they could’ve on another platform.