It’s been over 25 years since the last entry in Sega’s Streets of Rage series. The fourth game in the iconic beat-‘em-up series has not been developed in-house at Sega, but instead is a collaboration by Dotemu, Lizardcube, and Guard Crush Games. These developers did not give themselves an easy task, but they’ve successfully made a worthy follow-up that is a love letter to the classic Genesis brawlers.

Streets of Rage 4 occurs approximately 10 years after the finale of Streets of Rage 3. A new crime syndicate has taken over the city and it’s up to a cast of new and returning heroes to get things under control. The story is told through short cutscenes featuring mostly static images of artwork. While the plot is very simple, it does explain why the heroes are traversing the town and also features mind control, which is always fun. In addition, those who would rather ignore the story can easily bypass it with the press of a button.

The game features five main playable characters (Axel Stone, Blaze Fielding, Cherry Hunter, Adam Hunter, and Floyd Iraia) who each have their own unique attacks. The basic controls hew closely to the precedent set in Sega Genesis titles. Each character can initiate a strong attack, by holding down the Y button or perform a blitz move by double tapping left or right and then hitting the Y button. Back attacks and throw moves have also returned. Special attacks are performed with the X button and come in both defensive and offensive varieties. It’s super satisfying to knock down foes with Cherry’s guitar or use Floyd’s metallic arm to grab an normally out of reach opponent. One negative of the special attacks is that they’ll drain your character’s health. However, if immediately after using a special you can land some normal attacks without being hit, you can actually gain that health back.

The A button lets you pick up health restoring items (roast chickens and apples) as well as weapons. The same button also lets you throw and catch weapons. There’s something extremely pleasurable about catching a pipe right before it knocks you on your ass. If you’re lucky enough to be carrying a star, you can hit the X and A buttons simultaneously to do a powerful special attack called the star move.

The variety of attacks would mean nothing if the combat wasn’t enjoyable. I’m happy to report that the gameplay is vintage Streets of Rage and it feels great fighting through the game’s 12 stages. There are numerous returning enemies who will feature the attack patterns you remember. The game has some really inventive new elements as well such as wrecking balls and chandeliers you can crash down by cutting a rope. Another fun element is the game’s combo system. The combo counter will let you know how many hits you’ve been able to string together without getting hurt. While stringing together a large combo is satisfying on it’s own, it’s also a great way to build up your score. Scoring 8,000 points in a level will gain you an extra life, which is always beneficial and your score will also determine how you get graded when a level is done. Your single player high scores can be compared with your friends.

A few years ago, I was blown away by Lizardcube’s Wonder Boy: The Dragon’s Trap thanks in no small part to it’s beautiful hand-drawn artwork. Lizardcube’s artistic work for Streets of Rage 4 may be even more impressive. Along with creating the beautiful backgrounds for each stage, they also meticulously updated the artwork for the game’s returning heroes and enemies. It’s extremely commendable the amount of work that goes into rendering each frame of animation for the game’s large cast. You don’t see many 2D games that look this beautiful and fluid because most don’t include such a large amount of hand-drawn animation. The game features multiple unlockable art galleries, which I strongly recommend checking out.

The vast majority of the game’s stage themes were composed by Olivier Deriviere. While I didn’t love every track, there are some real bangers in the mix. In addition, there are numerous guest composers that include Yuzo Koshioro and Motohiro Kawashima who were the main composers on the Genesis games. In a perfect world, Yuzo Koshiro would have composed every single track, but we still ended up with a pretty amazing Streets of Rage 4 soundtrack.

Along with the regular story mode, there’s also an arcade mode where you’re tasked with completing the game with no continues, a boss rush mode, and a PVP battle mode. One other awesome feature that I haven’t mentioned is the ability to unlock 12 retro fighters. These characters are pulled directly out of their Genesis games and feature their original pixel art and moves. It’s worth noting that the game also features some other retro goodies that are worth experiencing for yourself.

I feel that Streets of Rage 4 shares a lot in common with Sonic Mania. Both game’s were led by development teams who had the challenge of continuing classic and beloved series. I’m happy to say that the dev teams creating Streets of Rage 4 have completely succeeded in making a new 2D entry in the series much like the Sonic Mania dev teams did. The utmost respect for the source material is clear throughout Streets of Rage 4 and I’m thrilled that we have this great new brawler in 2020. 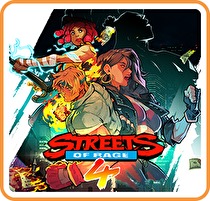