The void defeats all of us in the end, no matter how hard you try.

The eternal void of space can be a fickle mistress. Its vastness and beauty are quickly overshadowed by the fear of the unknown and a swift death waiting for you with the simplest of mistakes. Tharsis simulates all of this, as you take on a strategic, board-game-esque experience where the rolls of the dice will determine your success and failure in keeping your ship afloat. Brutally hard difficulty awaits you in each short run, where randomness and luck take what would otherwise be an enjoyable experience out of your hands.

Following a far-off signal, the crew of this ship is on their way to the Tharsis region of Mars. On the voyage, a meteor shower strikes the craft, killing two astronauts outright. From here you must take control of the remaining four members of the crew to attempt to keep the wheels turning on this suicide mission. Each stage throws the ship into further disarray, making successive rounds harder and harder to manage. Strategy, planning, and risk are all things that must be weighed in order to make it to your destination, but unfortunately, you only make decisions, with no significant way to improve the outcomes outside of the most minuscule of preparations.

Your crew consists of different classes that each have their own abilities to help you on this trip. From the ability to re-roll your dice an additional time to increasing the hull strength and more, where and how you utilize these members is crucial. Stats like sanity and health will need to be monitored and maintained in order to stay at full strength, as losing crew members will only make your run end that much sooner. Along with these individual stats, you must also keep track of how your ship is holding up to the meteors striking the hull, as having your hull rating hit zero also ends the run for everyone. 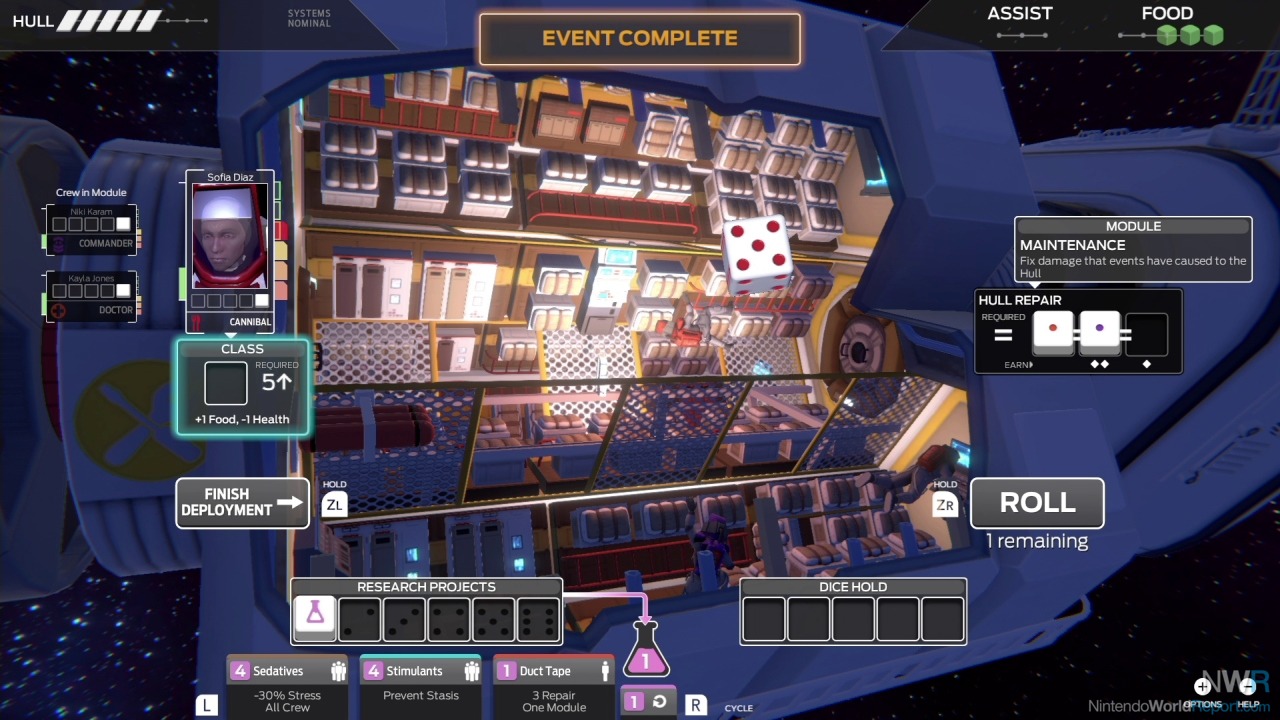 The different rooms aboard the ship each offer different functions on the journey and allow for longevity when utilized properly. A medical bay can restore a crew member back to full health with a roll of five or higher, three alike dice rolls in the food wing allow for some sustenance to be restocked, and so on. Gaining as many dice for your team as possible is a priority given that they will be your number one resource; where one room offers additional dice, food is also a means of restoring some of those lost rolls. Dice are critical to this entire formula since they allow you to utilize character abilities, perform research, repair rooms, and do just about everything else.

Events that take place at the outset of each stage cause damage to these various rooms, with their own critical status effects. Losing health for each member of the team, or even taking out multiple points of hull strength can occur if left unchecked, so you must have crew members enter these rooms to roll dice in an effort to fix the damage done. A large number will be set at the top of the screen, with each dice roll allowed to be subtracted from that number. Sometimes it will take multiple crew members to fix an issue, especially if you’re light on the number of dice available per person or if you roll poorly, so keeping all your resources full as often as possible will directly influence how long you can sustain a run. 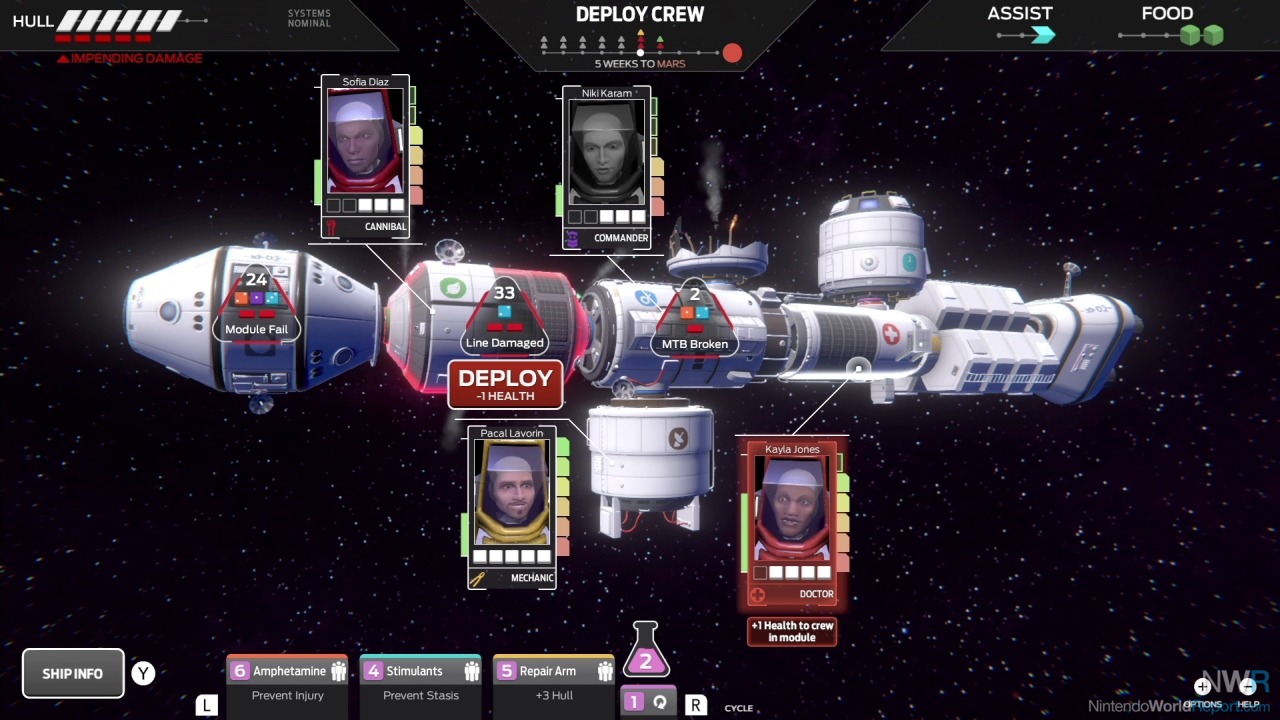 Aesthetically, there isn’t much to look at. You’re in space, so blackness fills most of the outside edges of the screen. The ship is filled with rooms of importance that only give you a glimpse of their interesting features and equipment. Animations for the crew member’s faces are well done, as they take damage or start to lose their cool, but nothing changes outside of the one, static screen you play on. Cutscenes between each stage give a brief glimpse of where you’re going, but it is forgotten quickly as each installment requires forward progress.

Beyond making those decisions to take on the brunt force of the damage in order to refill some resources, or going all-in trying to fix the ship, you are left at the mercy of the dice, where effects like “void” and “injury” can hurt the astronauts further or render your dice useless. This is where the difficulty becomes unbearable, even on the easiest of settings. Complete randomness controls everything that actually happens, as making all the right decisions can still end in death for an unlucky player. This makes what could easily be considered an interesting experience frustrating and difficult to get through. The length of the runs lasting roughly less than ten minutes with each attempt also means you will quickly get used to dying and restarting, which devolved into an effortless chore.

Tharsis would be a game I would enjoy playing on a tabletop with some buddies, while drinking some beers, and enjoying our repeated failures. However, as a single-player video game, with only a few extra missions to take you out of the basic gameplay loop that is consistently frustrating, the overall experience has all the right parts but just leaves too much up to chance to be enjoyable.

There doesn't seem to be any clamping as to how random it is. When I played it on PC it would be more than happy to throw impossible levels of damage. You can have perfect play, the best dice rolls, the best cards but if the RNG wants you dead there is nothing you can do.

It's the nature of these dice games if it doesn't contain enough player influenced elements or to hedge bets. You're either threading a needle or it's cake.