The only things running through my heart are blood and frosting!

Just a few days ago was April Fools Day, a day that a lot of people tend to dread year after year, and for good reason. While April Fools on the internet can be a day of fun goofs that provide new and weird kinds of content sites wouldn’t usually produce, it has just sort of turned into a day where mean spirited and fake announcements get made. Once in a blue moon, however, one of those fake announcements actually gets turned into a real game you can buy, as is the case for Cat Girl Without Salad: Amuse-Bouche, a game that was originally the April Fools prank from Shantae developer WayForward in 2013 before being released for real on PC in 2016. Now it has made its way onto the Switch as well, and sadly while I respect that this small prank became a full game I still can’t shake my feelings of it just being okay. 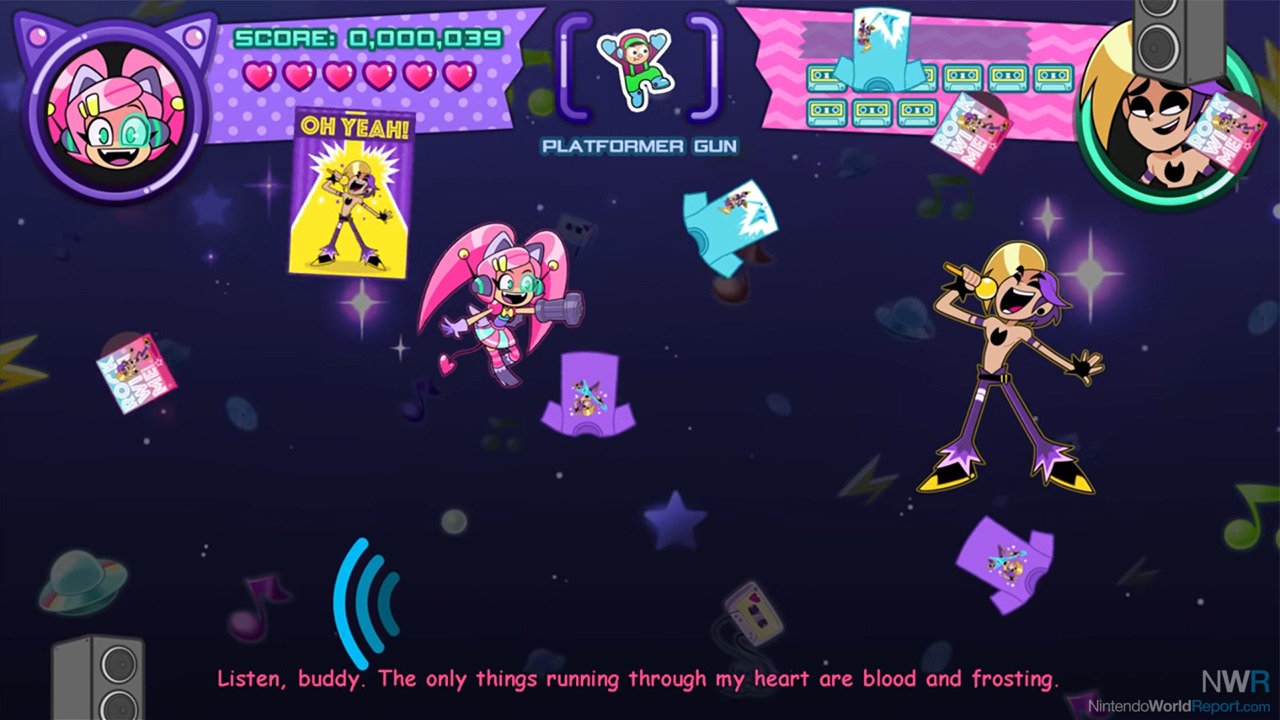 In Cat Girl Without Salad, you play as a cat girl named Kebako, who works as a legendary intergalactic bounty hunter. Kebako loves two things: junk food and actually it’s just junk food; she really likes junk food. I emphasize this because it’s one of the big jokes that the game likes to use constantly: she likes junk food so much that if you pick up a salad in game she will lose health as a result (hence the title; keep that salad away from her). The other major joke the game likes to use is that Kebako is incredibly dumb and self centered, often to the chagrin of her assistant Squiddie. While the writing is overall very fun and clever, the fact that these two jokes are at the center of nearly every line does tend to get slightly stale after a short while.

In terms of gameplay, Cat Girl Without Salad is a side-scrolling shoot-‘em-up, giving the player full control of Kebako as she dodges bullets and enemies that come from the right side of the screen. Kebako begins with a weak pea shooter (one that literally shoots peas) but certain enemies will randomly drop a number of more powerful and far more quirky weapons for you to use. Each weapon comes with its own gimmick, such as one that turns shooting into a DDR minigame or one that gives Kebako a Final Fantasy style gunblade that she can slash enemies with. These guns are funny, but for the most part nearly every single one felt like it made dodging enemy attacks harder if I wanted to use it effectively, and getting hit once will cause you to lose your upgraded weapon and send you back to using the incredibly weak pea shooter.

There are three bounties in the game, each ending with a unique boss and a small bit of story that usually involves Kebako having forgotten somebody from her past due to being extremely unintelligent. These bosses are interesting, and the dialogue during them is often entertaining, but much like the rest of the game they all feel like they go on for way too long, especially when almost all of the most powerful weapons I found to be completely useless against bosses. Many of them would simply cause me to get hit faster and therefore go back to the pea shooter. After these three bounties are complete, the game is over, likely having lasted a little under an hour in the end.

For people that are already fans of horizontal shooters, Cat Girl Without Salad probably has at least a little something for you. Its writing can be fun for its short duration, the voice acting is pleasant to listen to, and the music by Shantae and Shovel Knight composer Jake Kaufman is at the very least catchy. However, if you’re not already a fan of the genre or even if you prefer more meat on the bones of the ones you play, this game likely isn’t going to get you what you want. Its slow pace and short runtime may turn some players off, but if you’re looking for a way to kill an hour or so it may still be worth a look.