Before we get into the back-and-forth of this review FAQ, it might help newer readers to know that my long tenure at NWR has eventually led to being automatically handed two types of games for review purposes: fanservice games and dinosaur games. Gigantosaurus: The Game is the latter. Let’s get right to it.

Why yes it is; want to hear about it?

Sure, I’ve got time.

It’s Gigantosaurus: The Game, which is based on a Disney Jr. series and produced by Outright Games.

Something fishy about that title.

Good eye—the proper spelling of the titular dinosaur’s name is Giganotosaurus (“gig-ann-OTO-sore-us”), although I’m ashamed to say I pronounced it “Gigantosaurus” (“jai-GANT-o-sore-us”) until 2007.

Did you also learn about Giganotosaurus by reading Dinotopia: The World Beneath?

I did. I suspect they’re misspelling it on purpose here, since it’s easier for kids to say and associate—“gigantic” with “very large,” which Giganotosaurus is.

Longer, anyway, by a few meters, but it didn’t have rexy’s bite force or speed. Giganotosaurus is a carcharodontosaurid, which is a super-sized allosaur. They were quite diverse, and we even have one—Acrocanthosaurus—in North America (Oklahoma). They mostly stuck to the southern hemisphere, though. 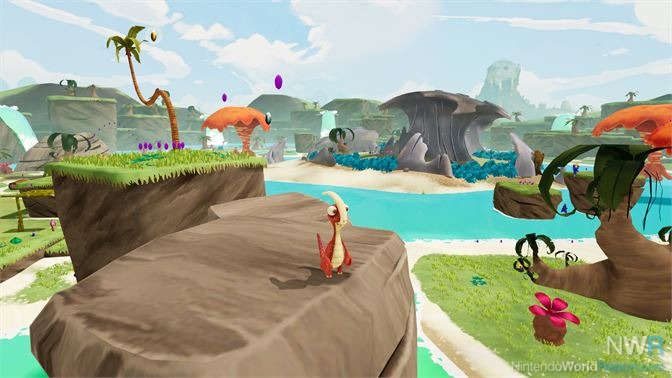 It’s a cute little platforming game where you and up to the three friends take control of the main characters from the show—a baby dinosaurs—and wander around very large 3D environments. In all but the last area, your goals are to find eggs and carry them back to a nest area, collect acorns, find storybooks, and plant trees. Each character has a specific ability—Mazu, an ankylosaur, can build things; Tiny, a Triceratops, can knock over logs to form bridges; Bill, a sauropod, can disguise himself as a tree; and Rocky, a Parasaurolophus, can climb up vine walls. If you’re playing by your lonesome, you’ll have to cycle between the four friends anytime an ability is required.

It’s fun enough. Each area has its own aesthetic, but the platforming is mostly the same between them all. You’ll be doing a lot of climbing large structures or finding your way through maze-like areas. There are some items within each environment that can mix things up a bit, like spring shoes or a parachute-like plant that lets you float down from a high ledge. Each area also has its own hazards. The desert, for example, has scorpions and cacti, while the river area has a prowling plesiosaur and the ice area has a lava river.

Yeah, and that’s kind of a bummer, although you only have to find three or four eggs before you have the option to move to the next area, so the game moves pretty briskly. The last area swaps finding eggs for helping Gigantosaurus escape a lava lake by routing boulders to stop up the lava flow. It’s the most fun area by far, and I wish each level had its own unique goal like this.

In between stages, the characters actually drive to the next area in a Mario Kart-esque racing segment. The courses are surprisingly long, very pretty, and have their own collectibles (Gigantosaurus skulls). There are no items, but there are plenty of shortcuts to find. I liked them.

Yeah, there’s some awkward level design; it’s not always clear how to get where you need to go, and the map isn’t super helpful. I feel like it’s not scaled right, and having to open it constantly with the “-“ button is a chore—a mini-map in the corner of the screen would’ve been preferred. There’s an underground area in the first level that’s a nightmare to navigate. Camera control isn’t as customizable as I would’ve liked, so I struggled with the camera quite a bit (is it so hard to implement inverted camera controls in games? Seriously, why isn’t it an option in every platforming game?). The nest in each area is not centralized, so you’ll be traveling quite far for some of them.

Is there a story?

Not really, no. And there’s no voice acting on the parts of the characters. There’s a narrator, but that’s it. I haven’t seen the show, so I can’t comment on how faithful this game is to it.

You know, I’m just as surprised as you are here—I did like their designs. Simple, but each character shows that species’ trademark features. Rocky, for example, has a backswept crest that clearly originates from the nasal bones. Mazu has a tail club. The raptors, although they lack feathers, have raptorial claws on their feet. There’s a Pteranodon who looks like a Pteranodon. I found myself charmed by the Stegosaurus who tells you where to plant trees in each area. I think I like these cartoon dinosaurs more than those in Dinosaur Train.

How do you think it would work for the target audience?

The goal of finding three or four eggs in each stage to move ahead is pretty low-hanging fruit, so that works. One or more dedicated players can tackle the longer-term goals, but there will have to be some coordination with the different abilities. Sometimes the frame rate is a little spotty, and objects have a weird habit of disappearing when close to the camera, but nothing game-breaking.

This is the kind of game where there’s nothing inherently wrong with it, but it’s also not super engaging. I suspect fans of the show will enjoy it most, and younger gamers will be able to hone their platforming skills. Everyone else can probably look elsewhere.

When did you learn how to pronounce Giganotosaurus correctly?

Sometime around 2007, when Gigantoraptor was described. Not that it’s NOT spelled “Giganotoraptor,” so I suspected something was amiss. My suspicion was confirmed a few years later a paleo conference where I heard the carcharodontosaur’s name spoken aloud for the first time.