This is the best of the classic style Doom games, fight me.

This past week, Doom 64 saw its first official release since it initially launched in 1997. If you’re a fan of the first two Doom games and have never played Doom 64, then you are in for a treat. It is, in many ways, the real true Doom 3. Unlike the official Doom 3 which would be released a generation later, Doom 64 carries forth the gameplay style of the original two, but brings with it significant graphical and design improvements.

Doom 64 follows directly after the events of Final Doom, the name of which has clearly not aged well. The armies of Hell have returned and as the only specialist in ripping and tearing, you are once again tasked with doing precisely that. From a lore standpoint, Doom 64 also serves as a possible prequel to Doom 2016, and thus this release makes a nice complement to the modern franchise. It also features several new, previously unseen levels that bring the total count from 32 to 39. While I never had any complaints about the length of the original release, the extra content does provide some added value for those returning from the Nintendo 64 version. 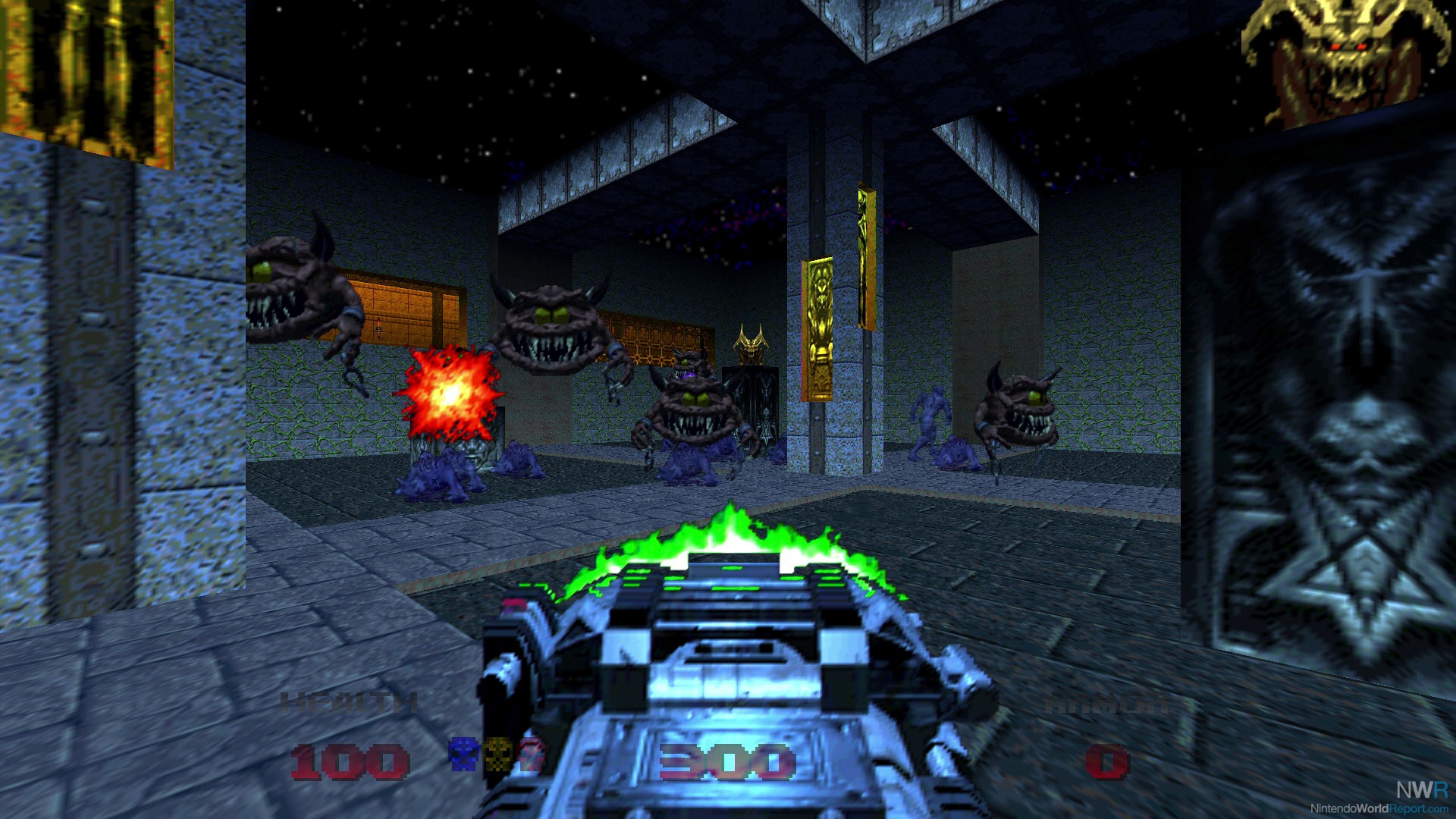 Doom 64 adheres to the structure of the original two games quite closely. You’ll be dropped into a large labyrinthian level, littered with enemies, keys, and some light puzzles. However, unlike the first games, Doom 64 tosses aside many of the limitations that came with the original Doom engine. Structures can now overlap, allowing for more vertical exploration. Colored and dynamic light sources are also now present, along with a much wider variety of environmental textures. Enemies, while still sprite based, are created from full 3D renders in much the same style as Donkey Kong Country, or Mario Kart 64. The colored lighting also influences all sprites in the scene, including the player weapon and enemies, which lends some remarkably rich and deep atmosphere to what would otherwise be simple visuals. It ultimately results in a game that feels like Doom with a sprinkling of Quake. Every time I revisit Doom 64, I’m shocked by how good it feels to play, and it feels even better in this modern port. Some will see it as sacrilege, but I’d honestly call this my favorite of the classic-style Doom games. It feels faster and more responsive than the first two. Every weapon feels satisfying to use and the enemies all look great. Of course, it’s not without its faults. While this modern port does address one of them, which we will touch on in a moment, another remains as prevalent as ever.

Doom 64 is all about exploring a level, pushing buttons to open doors, finding colored keys to open more doors, and finally finding an exit. Oh, and you might shoot a few things along the way. This is, after all, the classic Doom gameplay loop. However, Doom 64 pushes these elements a bit far at times. While in the first two Doom titles, pushing a button would generally have an immediate and obvious effect, in Doom 64 you’re often left to figure it out on your own. If you're lucky pushing a button will open up a door in the room you’re standing in, but just as often it will open a wall on the other side of the level. This leads to a lot of stumbling around, and looking for anything that might have changed in rooms you’ve already explored. 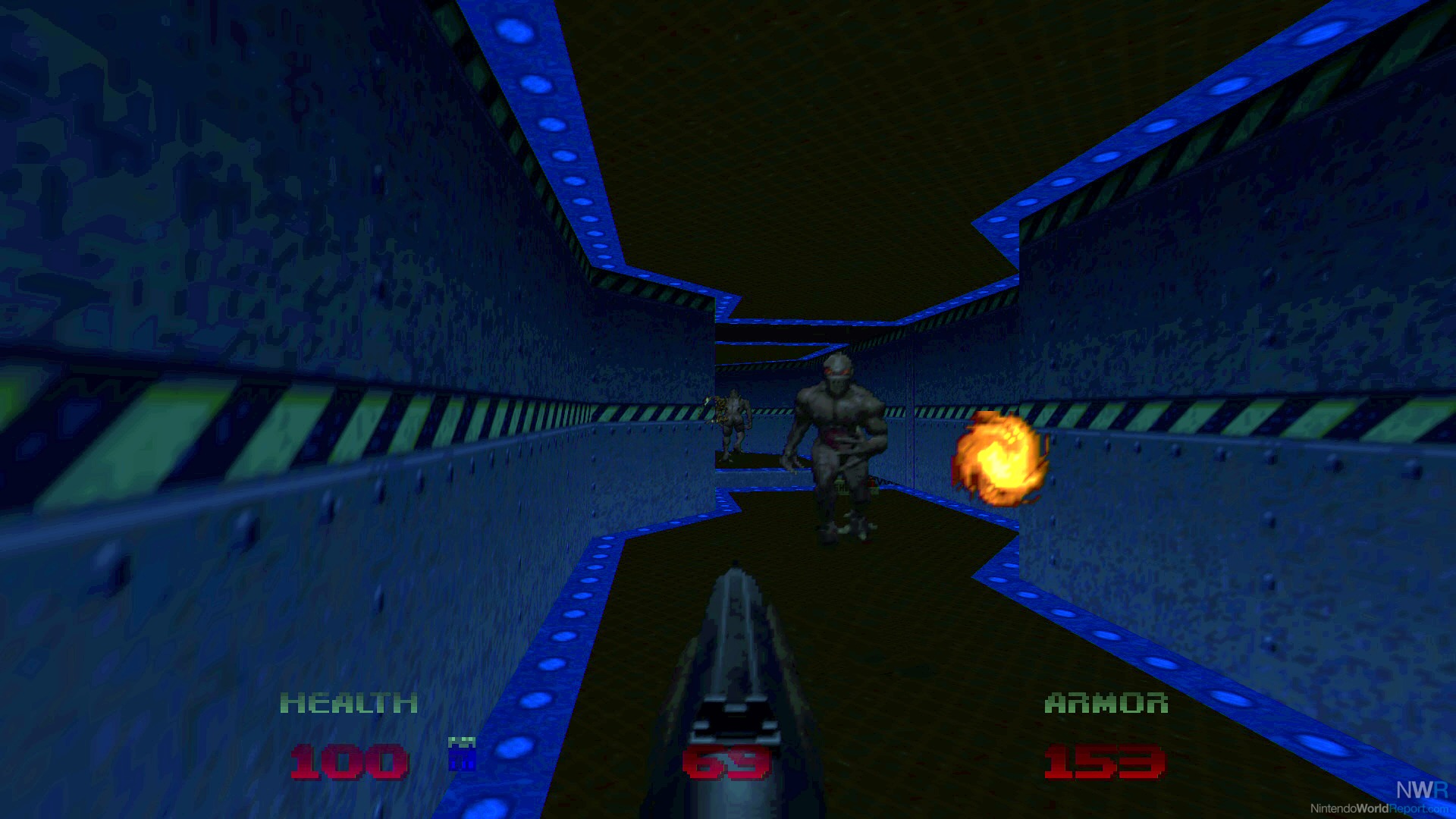 Unfortunately, when playing Doom 64 today using an unmodified N64 on a modern TV, your enjoyment will be cut short by how incredibly dark it is. Even with the brightness turned all the way up, Doom 64 is almost impossible to see on a modern flatscreen without some serious effort. This is where Nightdive’s effort somewhat literally casts a light in the darkness. Doom 64 on Switch, while still being a dark, moody game, is immediately playable without any adjustments. And if you do find yourself playing in a bright area there are even more brightness sliders than there were in the original.

Doom 64 looks wonderfully crisp in its modern incarnation. While the resolution of the sprites show their age and the geometry of the levels is often simple, there is something about the atmosphere that manages to remain creepy. Watching a demon come hurtling down a hallway as it passes between lit and unlit sections of the room remains incredibly effective over twenty years later. The music and sound design add to this as well. With its leaning into a more horror focused atmosphere Doom 64’s soundtrack is much more eerie and apprehensive rather than hard rock. The sound of every weapon and the cries of every demon were very high quality for the time, especially compared to the original games, and hold up surprisingly well. That super shotgun still packs a punch.

While the first two Doom games carry very little of the horror they may have originally had into the modern age, Doom 64 absolutely does. This game is still creepy, but without sacrificing any of the action of the originals. Its gameplay is refined and this port in particular cleans up its most egregious rough edge. The maps are as confusing as ever but being able to see where you’re going makes it much more tolerable. If you’re a classic Doom fan and have never played Doom 64, you owe it to yourself to pick it up. This just may be the best classic-style Doom.